67,000 people in King County are either cost-burdened or extremely cost-burdened when it comes to housing. Can we build our way out of this mess? 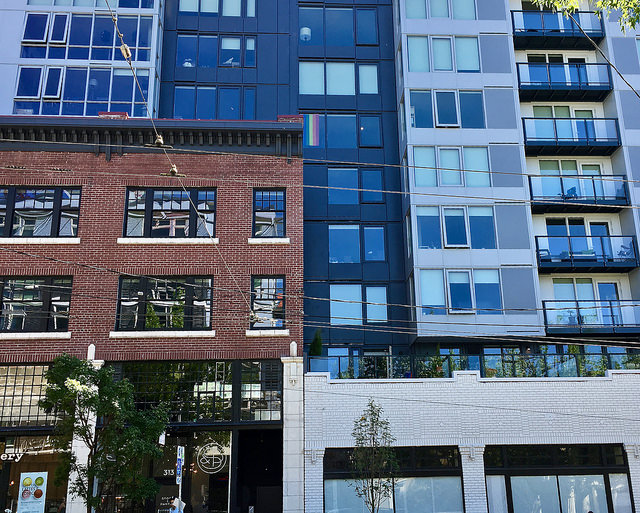 The inaugural Crosscut Festival was a huge party full of provocative conversation and debate. See you next year?

What’s the cost of so much growth in Seattle? That was a central question posed by Tyrone Beason, a staff reporter at Pacific NW, the Seattle Time's Sunday magazine, in a wide-ranging discussion about gentrification at the inaugural Crosscut Festival on February 3.

Miguel Maestas, director of housing and economic development at the nonprofit El Centro de La Raza, spoke about the success of Plaza Maestas, the low-income housing project that not only puts a roof over residents' heads but also provides a whole host of services, from cultural resources to restaurants, education and social services. “There’s an economic as well as a cultural component. It’s about creating a community,” Maestas said, advocating for this type of intentional approach in building more affordable housing in Seattle.

Kathleen Hosfeld of the Homestead Community Land Trust pointed out that 67,000 people in King County are either cost-burdened or extremely cost-burdened when it comes to housing. In a rare moment of agreement with Roger Valdez, the director of the pro-development Growth for Seattle, she said: “I agree with Roger. We need more housing.”

Valdez stressed the point that increasing the supply of housing — including housing that is affordable to folks in a higher income bracket — benefits the community at large. “Amazon didn’t raise your rent. The City Council did,” Valdez said, referring to city policies that he says hinder private housing development.

In regards to the displacement of African Americans in the historically black Central District, Valdez cited data that notes only 6 percent of African Americans acknowledge being forced out of the neighborhood. To which Hosfeld countered: There’s data and then there are stories. “We have to listen to the people who say they’ve been affected.”

That story of displacement was the thread in Inye Wokoma’s discussion. The filmmaker and Central District resident spoke about the six houses that used to be owned by his family in the neighborhood. “Those six homes had one purpose: family and space,” Wokoma said, noting that the homes were always multigenerational and that his mother would also give residence to foster children in the neighborhood.

Now, Wokoma said, economic pressures are forcing families like his to sell. The legacy of home ownership is precarious. Sure, there’s new construction and new housing. But, added Wokoma, “I’m not certain the new fact of density will provide the kind of flexibility that builds community and relationships that can perpetuate across centuries.”