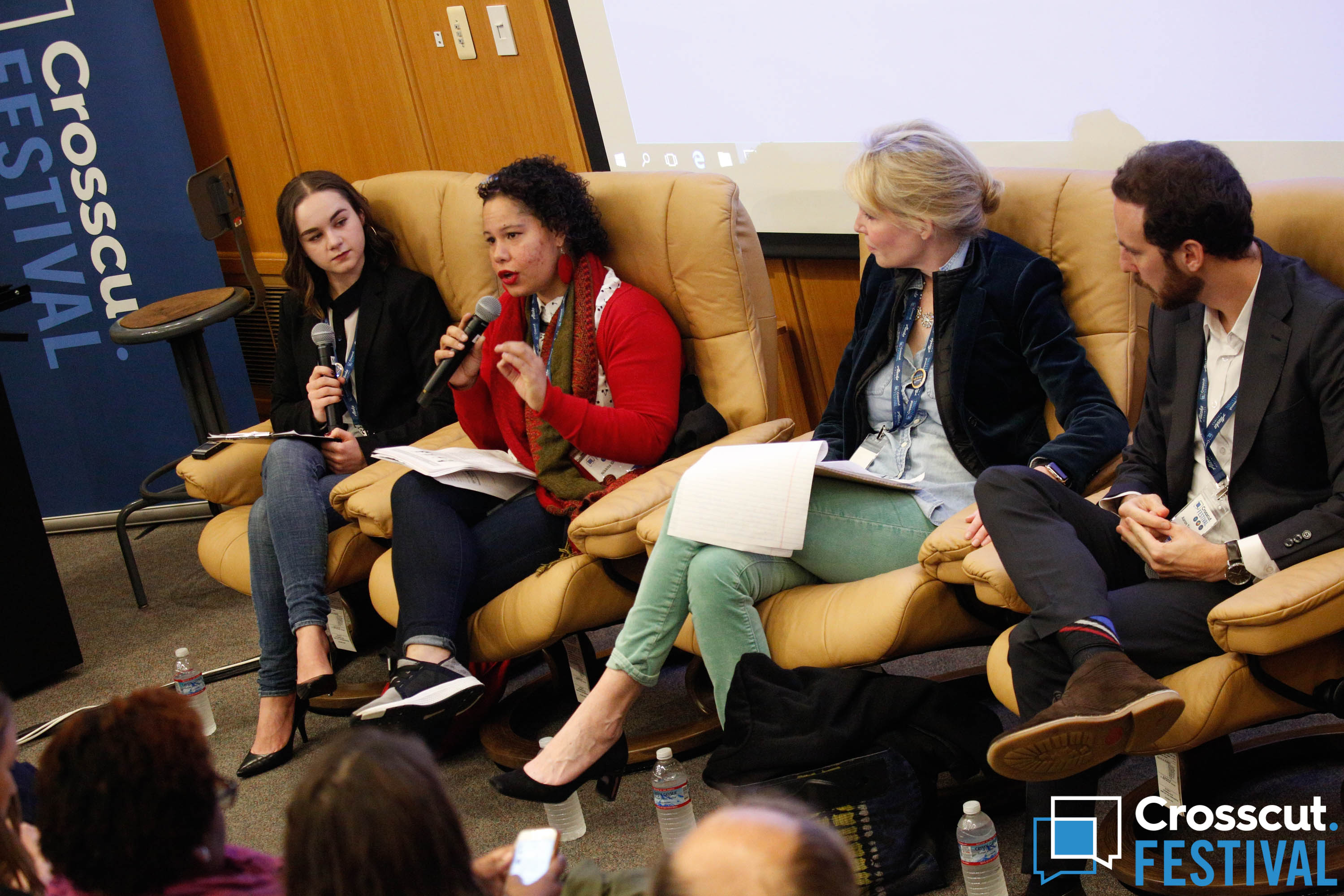 Nikkita Oliver at the 'Tech and the city' panel during the inaugural Crosscut Festival in Seattle on Feb. 3, 2018. (David Ryder for Crosscut)

Perhaps no neighborhood in Seattle reflects the city’s spectacular and controversial growth better than South Lake Union, the home of Amazon. In recent years, the e-commerce behemoth has pulled no punches erecting its gleaming urban campus just north of the city’s downtown core, adding reams of office space and the much-discussed Spheres, horticultural and architectural novelties mostly off limits to the public.

As the physicality of the city changes, so too does its economy and culture, and now that Amazon is close to announcing the destination of its second headquarters, aka HQ2, it’s worth debating what such a move could unleash on the company’s new home-away-from-home.

At the inaugural Crosscut Festival at Seattle University February 2-3, we curated a panel for just that purpose. Monica Nickelsburg, civic innovation editor for Geekwire, moderated a spirited discussion with a technology industry venture capitalist (Heather Redman of Flying Fish), an economist who studies housing markets (Aaron Terrazas of Zillow), and a former mayoral candidate who has stridently argued that corporations must do more for the public good (Nikkita Oliver).

A decade ago, South Lake Union boasted roughly 5,000 jobs, a number that has grown to “many times that today,” said Terrazas. Unsurprisingly, Seattle housing costs have increased alongside that job growth. According to Terrazas, over the last five to seven years, Seattle rents have gone up 50 percent, while home values have doubled.

While the SLU job boom explains 16 to 17 percent of the rent spikes, Terrazas said, it’s not all Amazon’s fault: Other tech companies have holed up here, people have flocked to Seattle for reasons that have nothing to do with work, and the city has a restrictive housing supply.

Nickelsburg wanted to know what responsibility corporations have to mitigate some of the negative consequences of their growth. Oliver, an attorney, pointed out that we treat corporations like citizens, and, that at least in theory, we expect citizens to be civically engaged. “We’re not supposed to harm each other,” she said. “We’ve made that decision, that contract, with each other — and yet we haven’t built the same expectation for corporations.”

She had words for the cities vying for Amazon’s HQ2 that have promised the company tax breaks, while ignoring the side effects of rising housing costs and gentrification that can displace poor communities and communities of color: “What lessons have you not learned from Seattle?” she asked.

Redman pointed out that tech companies have to look carefully at costs in order to remain competitive, and for that reason tax incentives can be attractive. Still, she said, tax breaks are not what provide fertile ground for a thriving economy; more important are strong education and transportation systems, diverse communities, and an ability to add housing rapidly. “What is the impact," she asked, "if we aren't able to continue to supply great jobs to people from a more diverse job base?”