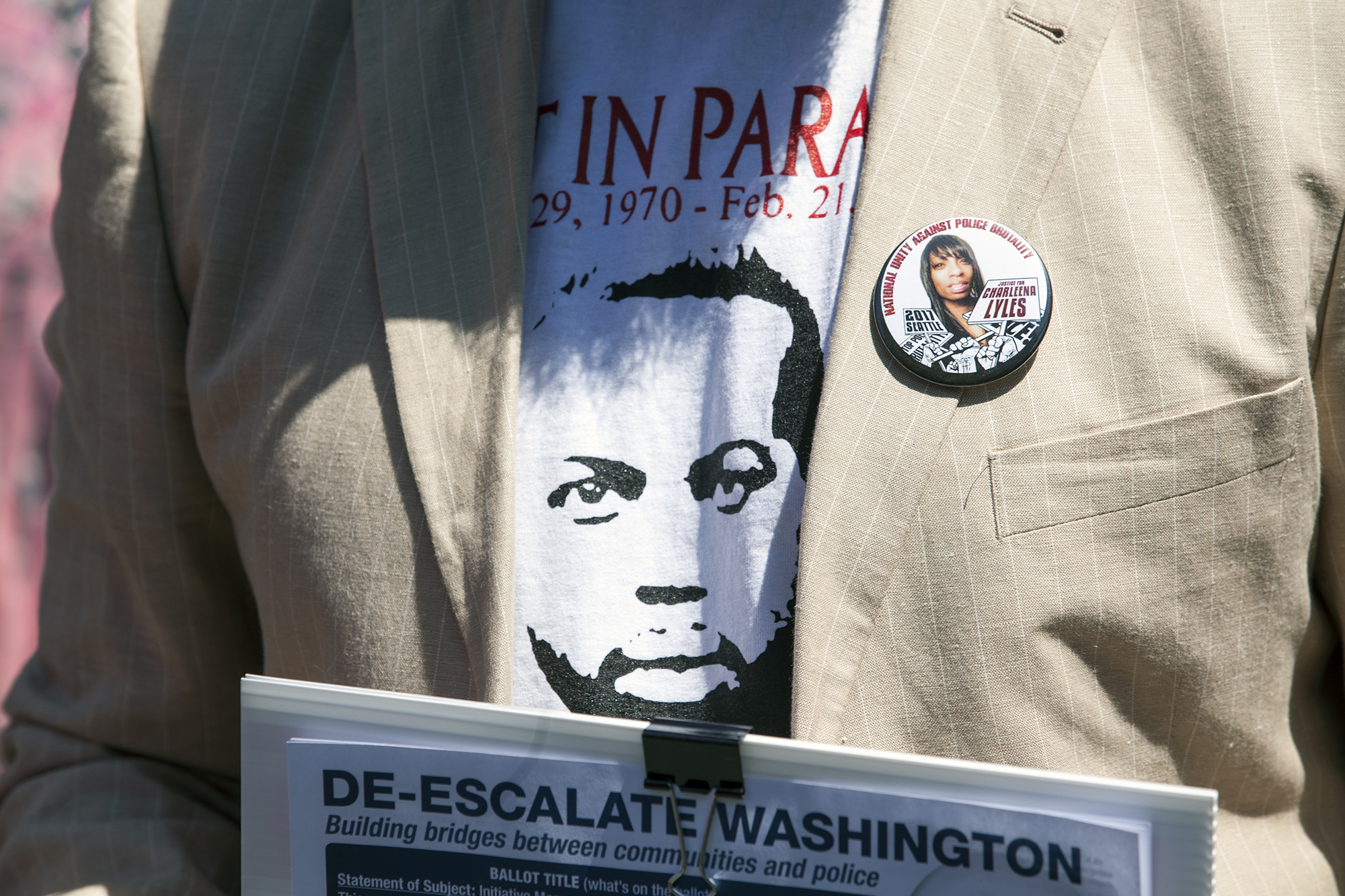 An image of Che Taylor on a T-shirt worn by his brother André Taylor at a Seattle press conference. Photo by Matt McKnight/Crosscut.

The civil complaint, filed in federal court Tuesday, accuses the city and the officers of negligence, wrongful arrest, intentional infliction of emotional distress, racial profiling and ignoring due process of the law, therefore violating the 14th Amendment of the Constitution.

The family and their attorneys, James Bible and Shakespear Feyissa, are requesting punitive and compensatory damages to be determined at a trial.

The complaint from Taylor's mother, Joyce Dorsey, and wife, Brenda Taylor, comes almost exactly two years after Taylor was shot and killed by officers Michael Spaulding and Scott Miller in north Seattle. Both officers are White. It also comes a year after an extensive King County inquest, conducted to establish the basic facts of the incident, not to determine guilt or innocence on the part of the officers.

Taylor, who served time for rape, robbery and assault and had been under the supervision of the state of Department of Corrections, had been flagged by the Bureau of Alcohol, Tobacco and Firearms and was not permitted to carry a gun. During the inquest, officers said they identified Taylor on the street and that they saw him with a firearm. As a result, officers devised a plan to arrest him as he exited a north Seattle home.

The officers’ plan did not go as intended and they ended up surrounding him as he stood near the passenger side of a car. Spaulding and Miller were the first to move in on him, shouting instructions at him to both put up his hands and to get on the ground. Both were wearing police vests over plain clothing.

What happened next is where the clarity of the case breaks down. In a dash-cam video released by the Seattle Police Department, Taylor can be seen bending over, behind the car and out of the view of the camera. During the inquest, attorneys Bible and Corey Guillmette argued he was complying with the police orders, which the attorneys argued were contradictory and confusing.

Officers, however, said he was reaching for a gun inside the vehicle. Spaulding and Miller both fired on him, likely killing him on the scene. A gun was later found in the vehicle.

Taylor’s death sparked widespread protest. Head of the local chapter of the NAACP, Gerald Hankerson, accused the department of framing Taylor. Che Taylor’s brother, André, has since launched an organization, Not This Time, which advocates for better police training and changing the state’s high burden of proof to convict an officer for deadly force.

At the inquest, jurors concluded that officers likely feared for their lives. But the jurors also concluded that Taylor was likely trying to comply with police orders.

The complaint accuses the officers of not rendering aid quickly enough. It also says that a White woman in the car at the time did not follow initial directions, but was not shot, which the attorneys say is proof Taylor was racially profiled.

Taylor’s death did not catch on nationally the way the police killings of Michael Brown, Tamir Rice or Walter Scott have. Part of the reason may have been Taylor’s serious criminal history.

But family members, attorneys and advocates have said Taylor’s criminal history should not have been a factor in his death and that he was denied due process under the law. Additionally, the claim says his mother, wife and children were also denied due process.

The Seattle Police Department deferred comment to the City Attorney's Office, which declined to comment until it has a chance to review the complaint.