As property taxes soar, will Seattleites stop being so generous? 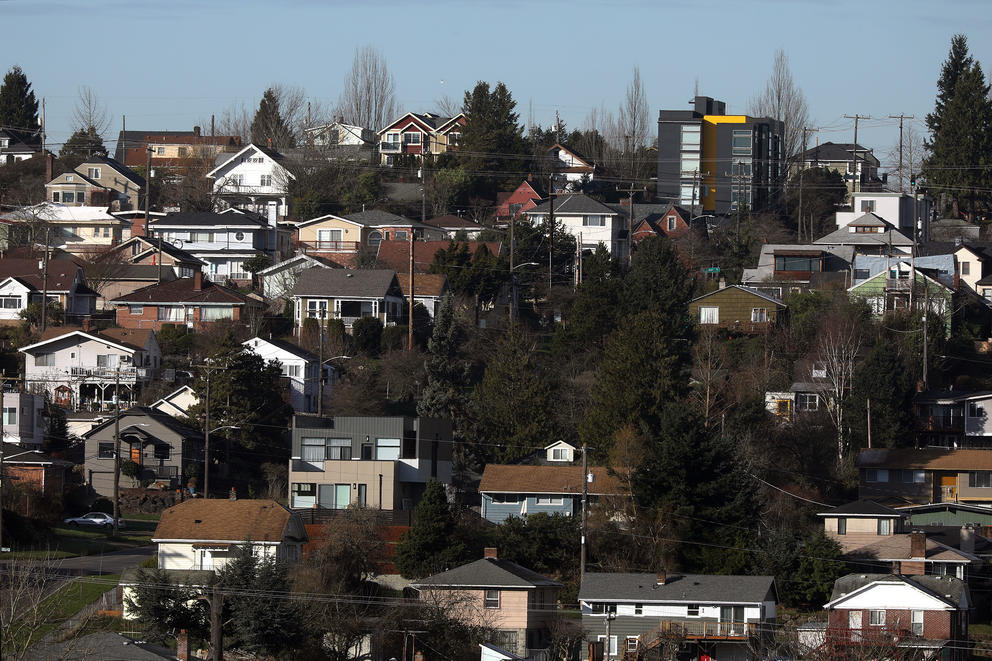 Continuing to grapple with how unaffordable the region has become, property owners in the Seattle area are about to be hit with even more sticker shock in the coming days when annual property tax bills arrive in their mailboxes.

A decision by state lawmakers to buoy public education spending starting this year by relying on more property tax revenue means Puget Sound residents, in particular, will have to pay hundreds or potentially thousands more this spring than they did last year.

Those extra dollars are on top of any property tax hike residents could have anticipated because of the booming housing market and in addition to myriad other taxes they already pay — from sales taxes that have reached double-digit percentages and controversial state rates on car tabs that fund Sound Transit’s expansion, to the potential extension or addition of school levies that most every local district put forth for voters’ approval Tuesday.

While Seattle area residents have typically been generous in embracing various taxes for public services, some officials predict — and worry — a reckoning is on the horizon.

“I think we have sort of lulled ourselves into a false confidence that, ‘they’ll vote for that, don’t worry about it,’ " said King County Assessor John Wilson, who has been heralding the arrival of the property tax hike for months in anticipation of the bills being mailed to residents this week.

“What I am hearing more and more as I travel around the county is, from those taxpayers who have been historically reliable ‘yes’ votes, they say, ‘I saw the notice and I’m not going to vote for anything more. … I’m at a point where I can’t afford it. It may sound good and I might even support it, but I just can’t bring myself to vote for it.’ That day, I think, is going to be a wake-up call to us,” Wilson said.

It's happened before, Wilson noted. He recalled a King County levy proposal in 1997 to fund Medic One emergency services, which failed.

"Part of what was driving it then was motor vehicle taxes were going up dramatically and (it) had reached a point where people were mad as hell and they weren’t going to take it any more but they couldn’t vote on [those taxes]," Wilson said. "And then in, kind of, a throwing-the-window-open, 'I’m mad as hell and not going to take it anymore’ attitude, they said, ‘And I’m voting no on this Medic One thing, too!' "

So when it comes to this year's property tax increases, he added: "I think it is a really legitimate concern that, for taxpayers in the Puget Sound region, there’s a perfect storm."

Wilson and others worried Tuesday’s special elections for school levy measures might have proved to be a first test of that potential awakening — which made school district leaders in western Washington particularly anxious ahead of the results, said Bill Keim, the executive director of the Washington Association of School Administrators.

“It’s always a little difficult communicating tax measures for voters, and this is a lot more complicated,” Keim said shortly before the voting deadline. "They're really nervous out there."

However, such concerns largely didn't appear to have been realized in initial and unofficial results late Tuesday. A majority of the multi-million-dollar levy proposals across King, Pierce and Snohomish counties were earning voters' endorsement, although some school bond measures were falling short of the super-majority (60 percent) required for approval.

All 12 school districts asking for voter-approved levies in Pierce County appeared to be victorious. Among 16 school districts in King County and 13 in Snohomish County that sought levies, only a few local measures in each county were poised for defeat.

A comparison of King County's results with a 2014 election, when many of the same districts were on the ballot, shows Tuesday's initial results appear to be markedly closer than the final counts four years ago. Because of Washington's mail-in ballot system, results can shift considerably.

Before Tuesday's results started to come in, anti-tax advocate Tim Eyman argued that residents likely don't know the full extent of the tax burden they're approving, especially when the property tax bills won't arrive for another several days.

"Until you actually get the bill from the assessor, you can’t make a gauge on it," Eyman said earlier this week. "I wouldn’t be surprised if a lot of the levies do just fine [Tuesday], because people haven’t felt the impact of what’s coming."

Under orders from the Washington state Supreme Court to drastically increase state spending on K-12 education, lawmakers last year passed legislation that uses property taxes as the means to fulfill their obligation to what is known as the McCleary decision.

The funding formula — roughly an extra $1.01 for every $1,000 in assessed property value — hits the Puget Sound region particularly hard, where home values are drastically higher than elsewhere in the state. "This formula was clearly set up to maximize revenue coming out of high-value communities. That’s us," Wilson said.

King County homeowners can expect an increase, on average, of about 17 percent above what they paid last year in property taxes. For a median home valued at $597,000 in Seattle, that translates to an extra $825 in taxes this year, according to Wilson's office.

Snohomish and Pierce counties are bracing for similar hikes, although the figures can vary widely from city to city throughout the Sound.

Wilson and other officials also worry the higher bills will burden already cash-strapped homeowners, potentially forcing some into a Catch-22.

Wilson said he's especially concerned about low-income seniors on fixed incomes who bought homes decades ago that are now worth millions of dollars. "The terrible dilemma they face is ‘Oh God, do I sell?’ Maybe — but then where do you live?" Wilson said. "Even if they get the money, they go: ‘Either I literally can’t find a spot, or the price is at such a point where I can’t afford to buy something even newer and smaller in the neighborhood.' So you dislocate them."

"There are a lot of these things happening where the property tax is starting to have societal impacts beyond simply funding the good and just things that it was supposed to fund," he added.

For Eyman, the latest property hike presents a prime example of the big government he's warned against for years. But he said even he's shocked at how brazen and "tone-deaf" he argues local and state government officials are being in burdening taxpayers with their various proposals.

"Usually governments are smart enough to boil the frog kind of slow," Eyman said. "Normally they’re smart enough to know to crank the heat up a little at a time and people are going to boil to death (in taxes) and not know it. This time, they're blasting the heat all at once."

He argues taxpayers might soon reach their limit on taxation. "There’s this tipping point of where that average taxpayer is just going to go: 'WTF, this is crazy,' " he said.

But when or if that reaction sets in — such a tipping point has been frequently predicted in the past — there's little immediate recourse for disgruntled property owners.

They will still have the expensive property tax bills to pay this year. State politicians have pledged, though, that as the new system transitions to state taxes more than local ones for schools, there should be some reprieve next year on local levies. Meanwhile, lawmakers in Olympia locked in their state funding formula for McCleary through 2021.

Wilson and Snohomish County Assessor Linda Hjelle both encouraged older homeowners to seek a property tax exemption that's offered to senior citizens who meet certain age and income requirements. But there's not much other immediate flexibility taxpayers have.

"There really isn’t a mechanism to appeal your taxes," Hjelle acknowledged. Assessment increases can be appealed, but those occur in the fall — meaning the time for contesting any hikes last year has long passed.

Wilson said this year's property tax increase showcases the need for lawmakers to reform the state's tax structure, which he says relies heavily on property tax revenue almost by default because of limited alternatives. (Washington has no state income tax, for example.)

"One of Washington’s problems is we have a fairly narrow set of revenue generation tools," Wilson said. "This has to start to bring into focus that the property tax system is not sustainable in this trajectory and at some juncture we’re going to have to step back and say ‘Look, how do we design a more fair and equitable system?’"