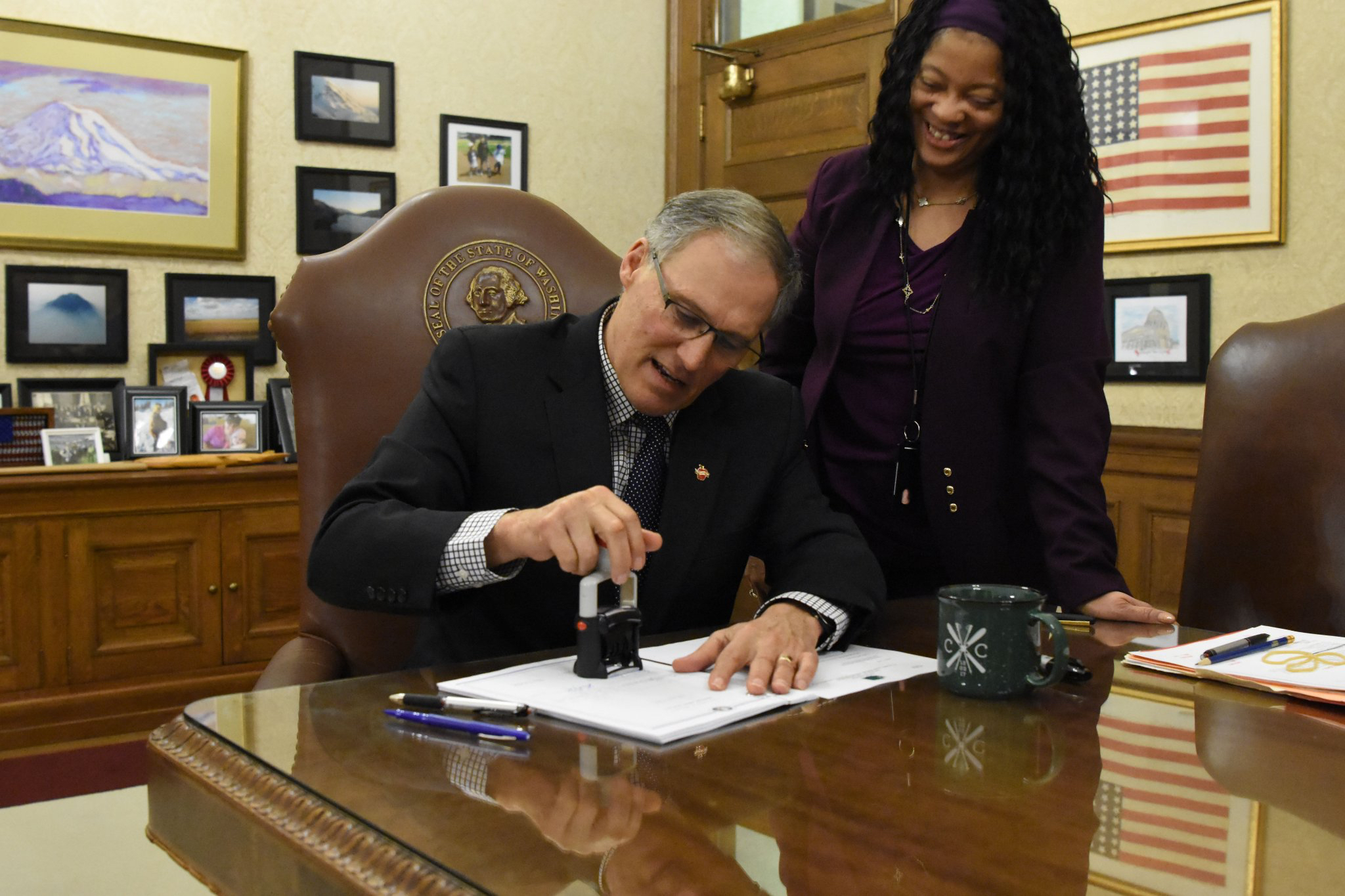 Washington Democratic Gov. Jay Inslee vetoes a law that would have blocked public access to many of the Legislature's records. (Governor's Office)

This was probably the most radioactive bill in recent Olympia history. Everyone wanted it far, far away.

In the hours before Democratic Gov. Jay Inslee vetoed the controversial bill Thursday evening that would have guarded many legislative records from public view, numerous state legislators shied away from talking to reporters about the measure.

Earlier in the day, 16 Senate Democrats had sent a letter Thursday to Inslee asking him to veto the bill. At the same time, 41 Democratic House members sent a similar message.

The House Republican caucus also sent Inslee a letter Thursday, saying: “All 48 of our members wished they could have voted for a better bill. The people demand disclosure.”

It was a bill that most legislators had openly embraced last week.

In a written statement about his veto, Inslee said: “I believe legislators will find they can fulfill their duties while being fully transparent, just like state and local governments all across Washington. I want to thank the legislators who have reconsidered this bill and asked me for this veto tonight.

"Since this bill passed, my office and lawmakers have heard an unprecedented level of response from the public. Those messages were heard loudly and clearly," he added.

Only days before, Inslee had told an MSNBC interviewer that he couldn't veto the bill because the measure had passed with enough votes for lawmakers to override it. His statement was torn apart as wrong, with critics noting he had exercised his veto power in the face of overwhelming majorities before.

On Thursday, Inslee acknowledged: “I did tell legislators I would let the bill become law if they delivered it with enough votes to override a veto. However, that was before I saw the process, which failed to meet public expectations for openness and delivered a bill that fell short.”

Inslee’s veto came after the governor’s office received more than 12,500 emails, some 6,350 phone calls and at least 100 letters on the topic — almost all supporting a veto. Washington Attorney General Bob Ferguson, a Democrat, also supported a veto.

That outpouring came after a coordinated media campaign to persuade Inslee to veto the bill. Several newspapers ran front-page editorials on the topic — an almost unheard-of gesture.

In requesting a veto, the House and Senate Democrats’ letters used many of the same sentences.

“We have heard loud and clear from our constituents that they are angry and frustrated with the process by which we passed [the bill]. … We made a mistake by failing to go through a full public hearing process on this very important legislation. The hurried process has overshadowed the positive reforms of the bill,” both letters said.

The House Republicans’ letter to Inslee said: “The Democrats scheduled a hasty joint work session an vote in both on SB 6617 [the bill]. We understand you and the Democrat leaders have orchestrated a veto of SB 6617. This is a good start.”

The controversy dates back to the 2017 legislative session when several news organization made requests for legislative records such as emails, reports and calendars — and were denied. For decades, the Legislature has been able to keep records secret that Washington’s local governments routinely have to provide. The Associated Press, several newspapers, two Seattle television stations and Northwest Public Radio filed a lawsuit in Thurston County Superior Court to order the Legislature to make its records public. In January, a judge ruled in favor of the media. The Legislature appealed, but then came up with the bill.

The media plaintiffs, Inslee, the Attorney General’s Office and the Legislature have agreed to set up meetings to study the open records issue — in return for all sides putting the litigation on hold.