E-bikers, these sidewalks are made for walking

You can debate whether Seattle has a war on cars, but there’s no doubt about the war on pedestrians. 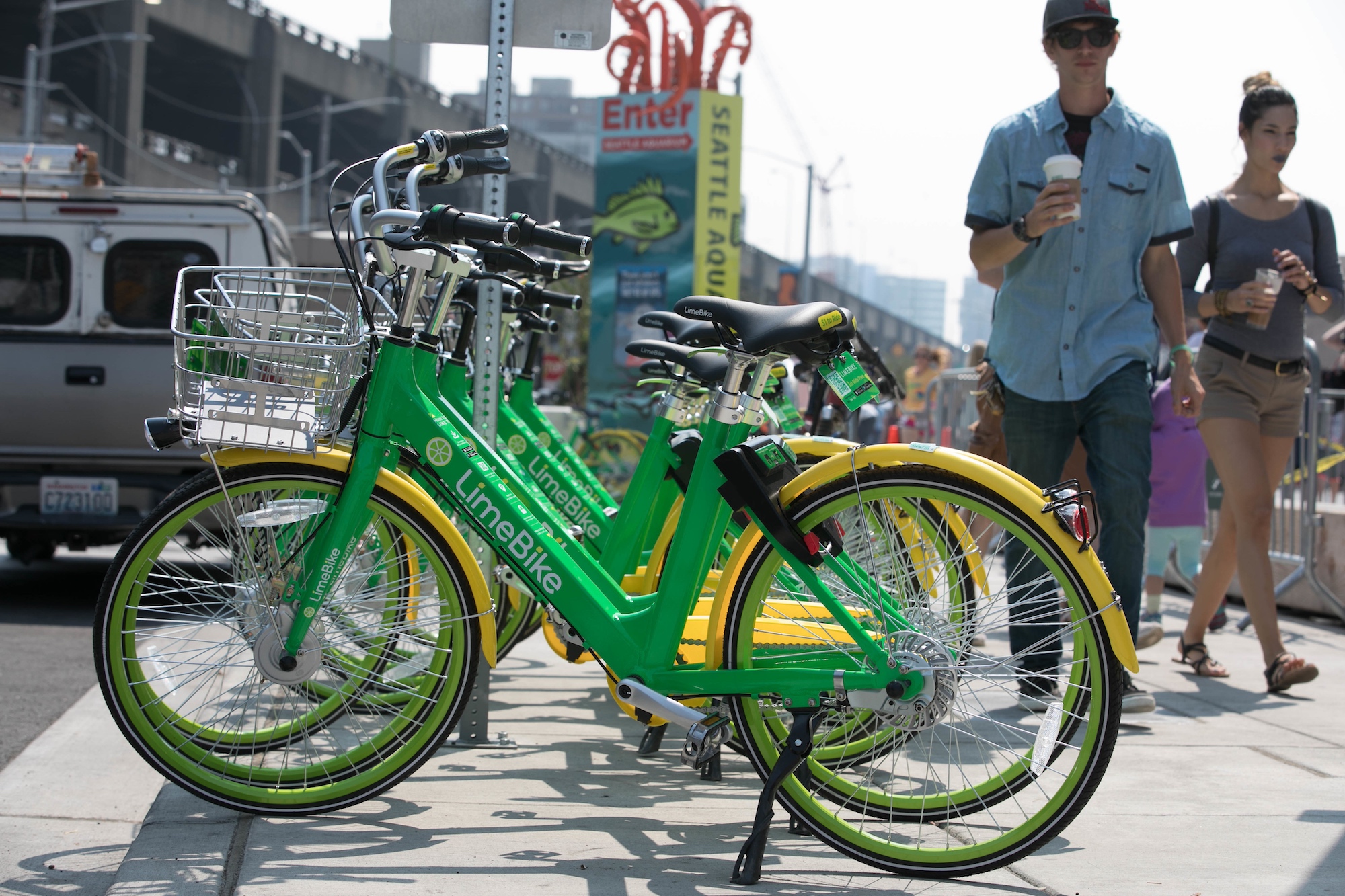 People may differ on whether Seattle really has a war on cars to discourage people from driving. But the war on pedestrians is definitely game-on.

It’s time for people in Seattle who use the sidewalks — and that’s just about everybody — to send a message to elected and appointed public officials. Years of inattention and indifference to pedestrian safety and convenience on sidewalks and crosswalks has got to change.

Pedestrians have long had reason to worry about the risk of getting nailed by cars in crosswalks. What’s new this year, however, is that Olympia has made your Seattle sidewalks into all-out bikeways for the newest hottest thing on two wheels: 20 mile-per-hour top speed, battery-boosted, electric-assist bikes.

This officially arrives in mid-June when the just-signed Senate Bill 6434 becomes law. That will have the effect of conferring on Seattle the dubious distinction of being practically the only major metropolitan city in North America where the new e-bikes — electrically assisted bikes — claim side-by-side space with pedestrians on every square yard of the public sidewalks.

So, it will now be cars and bikes against pedestrians.

How could that have happened?

You need one essential background fact. Already when it comes to regular bikes, Seattle has an ordinance dating from 1979 allowing bikes to be ridden even today on all Seattle sidewalks, including in its busiest pedestrian areas. That’s a throwback to an earlier time — before the growth of bicycle commuting as well as the surge of recreational riding, before wide recognition of sidewalks as the special refuge for the elderly or disabled, before safety experts drew attention to the risks of sidewalk riding to both cyclists and pedestrians and before congestion on sidewalks mirrored urban growth just as on the roadways. That is why in major North American cities, unlike in Seattle, free-for-all sidewalk riding is a long-abandoned, permissive anachronism.

Regardless of the outdated ordinance, the Seattle Department of Transportation (SDOT) last summer eagerly dove into a dockless bikeshare program it hoped would be a nationally celebrated bike-friendly rebound from its Pronto debacle. SDOT in July granted permits that opened the gates for three companies to go into business on the streets and sidewalks with 10,000 ride-and-drop-anywhere bikes.

Predictable trouble immediately brewed. Rent-a-bikes in violation of the permits were scattered all over sidewalks, curb ramps, bus loading zones and even people’s lawns. That created a special new challenge for sidewalk-dependent pedestrians with disabilities.

An unhappy but largely powerless SDOT, having poorly prepared for the discarded bikes problem, was left only jawboning the companies to clean up their own and their inconsiderate riders’ bad.

Worse for annoyance and everyone’s safety, the new bikes’ riders — usually noticeably indifferent to the helmet law as well as other people’s sidewalk prerogatives — were also cruising through the pedestrians even in Seattle’s busiest areas under color of the 40-year-old sidewalk ordinance. That brought an old lurking problem to a big new level. Some of SDOT’s own top managers privately acknowledged that the uptick in sidewalk riding was outside of national norms.

But SDOT’s bikeshare proponents had no appetite for remedial action against the sidewalk riding. Were they too invested in the glow of their national bikeshare limelight? Or too intimidated to risk a pummeling from Seattle’s take-no-prisoners bike lobby?

In January came hundreds of the new battery-boosted electric-assist rent-a-bikes.  Exploiting SDOT’s permit to use city streets and sidewalks, LimeBike crowed that its e-bike launch would favor Seattle with more e-bikes than any other city in the country. SDOT itself conditioned that e-bike launch with a ban on these faster, heavier rent-a-bikes on the sidewalks. Unable or unwilling to assure that by fixing Seattle’s own obsolete permission, they seized a lucky rescue net: A state law was already in place prohibiting e-bike riding on sidewalks everywhere. So, SDOT required LimeBike to stencil every one of its 500 e-bikes with a notice that sidewalk riding was prohibited. At least that would distance SDOT from the folly of otherwise inevitable sidewalk mayhem. Meanwhile hundreds more e-bikes were expected soon to arrive from Spin and Ofo, the two SDOT permit-holders from China, home base to the global bikeshare boom.

Then came the big blindside hit to Seattle’s pedestrians. SDOT had neglected to keep an eye over its shoulder on the bike lobby. Washington Bikes/Cascade Bike Club — which merged in 2016 and claim to be the nation’s largest statewide bicycle non-profit — had its own ideas. Seeing e-bikes, wholly independently of bikeshare, as the fastest growing segment of all bicycle sales, Washington Bikes has embraced an e-bike vision. E-bikes — ridden by everyone, young and old, on every terrain and in every weather — would finally fetch Seattle to the long-promised but slow-arriving bicycling Nirvana. Suitable legislation in Olympia on new e-bike classifications and standards would power the liftoff.

Legislation that became Senate Bill 6434, of course, needed helpful legislators. That’s where Washington Bikes struck great good fortune. Two very influential people, Senate Majority Leader Sharon Nelson, D-Maury Island, and state Sen. Christine Rolfes, D-Bainbridge Island, turned out to be recently converted e-bike aficionados. In legislative hearings, they each testified rhapsodically about riding their own e-bikes around the rural precincts of Vashon Island and Bainbridge Island. Nelson surely sealed the deal: “I am in love with my bike. It makes you feel like you are 25 again, even if you are a bit over 40.”

The bill refashioned existing law to define two classes, a 20 mph top-speed e-bike class and a 28 mph class. It also did away with existing law requiring e-bike riders to be at least 16 years old.

Most critically for Seattle and any other locality without its own sidewalk bike-riding regulation in place, the new law erased the old state law prohibiting e-bike riding on sidewalks. (Even a 28 mph class e-bike can be on a sidewalk where a bike lane crosses a sidewalk.) Thus vanished into thin air the bulwark SDOT had been relying on to keep the new bikeshare e-bikes off Seattle sidewalks.  And of course, the legislation opened the sidewalks in Seattle not just to bikeshare e-bikes but also to all the ones selling at a hot pace to individuals.

Sensible places like Bellingham, Olympia and Redmond that had already restricted sidewalk riding don’t have to adopt new legislation to keep their regulations. It’s Seattle where, unless city officials step up a new ordinance, “look out” will be the new watchword for pedestrians and “on your left” as riders whip past you from behind — if you get a warning at all. Interestingly, Bellevue, like Seattle, now has no existing local controls in place, despite the city’s issuing cautionary public safety advice against adult sidewalk-riding on any bike.

Prices give good insight into the disposable income of the new personal e-bike rider — whether 12 years old or 70 — who will blow past you on the sidewalk. The 30 e-bike models now advertised in Seattle and Bellevue by Gregg’s Cycle range in price from $2,300 to $6,000.

Don’t overlook a big e-commerce play to make new uses of the sidewalks, too. Domino’s Pizza already delivers to downtown condo buildings on sidewalk-riding e-bikes. A lot more of that will be coming.

What's coming next? In Seattle, we know that at least LimeBike eventually envisions 40 percent of its dockless bikes to be e-bikes. And that’s nothing compared to the surging count of people’s personal e-bikes.

And the e-bikes are not just headed for sidewalks; supporters are eager to invade Seattle’s popular multi-use trails — including Burke-Gilman — which are already crowded with ordinary recreational cyclists, joggers, old and young walkers, dogs and children.

SDOT stated in a recent briefing for members of the disability community that it was unhappy already to observe e-bike riding on sidewalks in disregard of the stenciled prohibition on the bikes. In the wake of e-bikes on the sidewalks will inevitably come more e-unicycles, hoverboards, uniwheels and motorized skateboards, too. LimeBike has just launched 15 mph electric scooter-share in Washington, D.C.

Along with SDOT, Mayor Jenny Durkan and the Seattle City Council should realize that they have also been dropped into a tricky political spot about the entire dockless bikeshare program and the sidewalks. Consider that two key SDOT staffers — one the head of transportation and the other the chief planner for bikesharing — last July boldly designed the big dockless bikeshare program for Seattle in the aftermath of the shutdown of Pronto — and have since landed with companies in the industry. The model produced by bikeshare career opportunists probably didn’t bring Seattle all the right answers.

One place for Durkan, the City Council and SDOT to start to make adjustments is a look around the country to see where bikes — e-bikes, too — don’t intrude on and compete with pedestrians because sidewalk bike-riding is prohibited altogether or judiciously restricted in the busiest parts of town. Seattle is an outlier in its sidewalk bike-riding permissiveness with virtually no company even among the most progressive bike-friendly cities. Cities everywhere commonly restrict or prohibit sidewalk bike-riding, including many cities admired by Seattle cyclists and transportation planners: Washington, D.C.; San Francisco; New York; Portland; Vancouver, British Columbia, and even Copenhagen, Denmark. (Click here for a list I've compiled.) 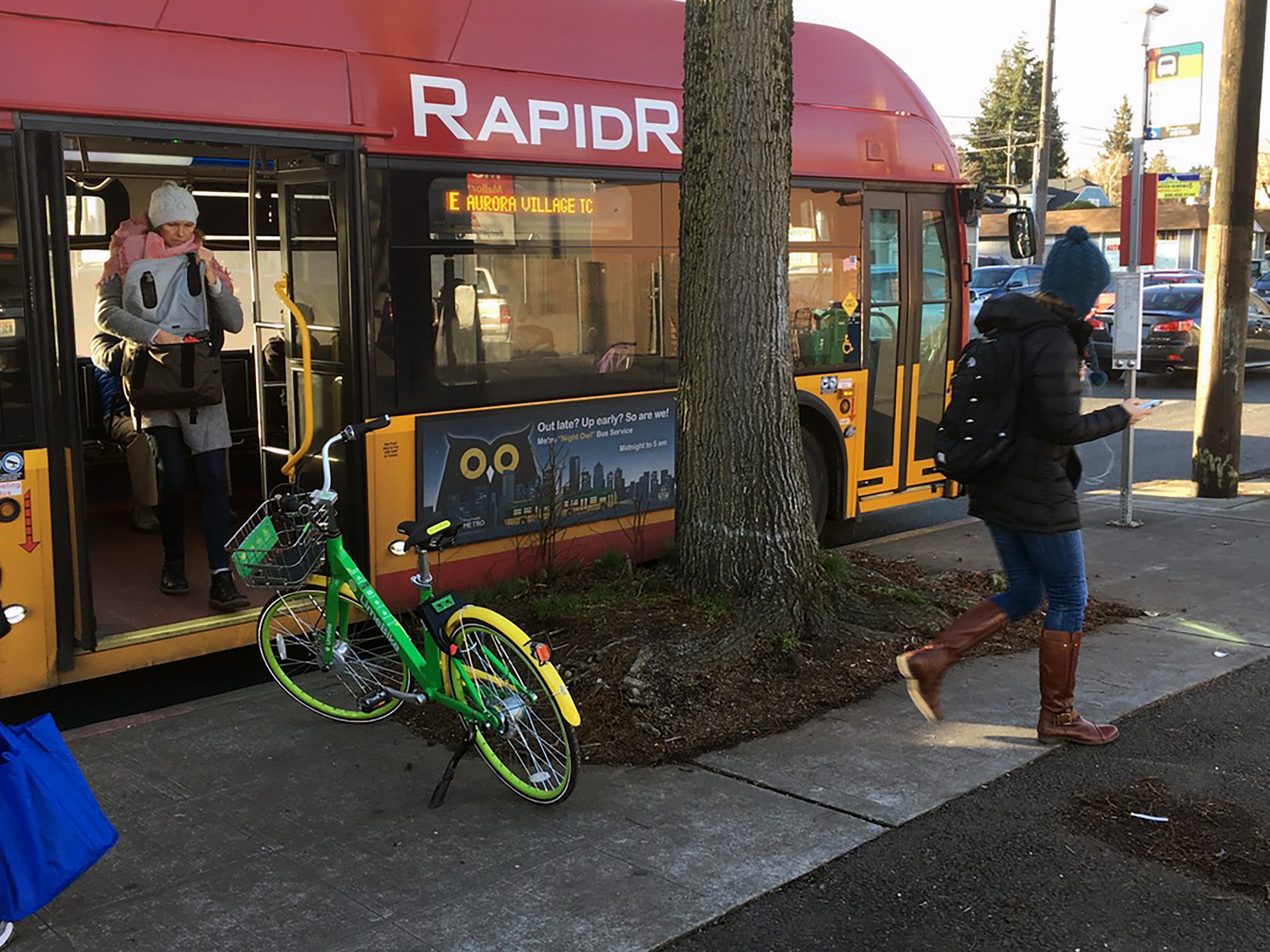 A rental bike directly interferes with a transit rider as she exits a bus and becomes a pedestrian. (Photo by Douglas MacDonald)

A rental bike directly interferes with a transit rider as she exits a bus and becomes a pedestrian. (Photo by Douglas MacDonald)

An obvious next step: Seattle needs a new ordinance for everyone’s sake (and to support a good future of dockless bikeshare): No bike-riding on sidewalks in Seattle’s Comprehensive Plan-designated busy urban centers — including Downtown/South Lake Union, First Hill/Capitol Hill and the University District — and urban villages, such as Ballard, West Seattle Junction, Columbia City and Fremont. As often found elsewhere, certainly a carve-out is OK for bike-mounted public safety officers and for children under 12 riding bikes with smaller than 26-inch wheels.

This, today, is the most urgent goal Seattle’s pedestrians and Seattle’s officials must pursue. It has the huge weight of good sense and safe, progressive, bike-friendly practice around North America and elsewhere on its side.

Prepare for opposition: A spokesperson for Washington Bikes responded that it would not be supportive of a new Seattle ordinance to ban e-bike riding on Seattle sidewalks. But pedestrians can and must move this agenda in their own interest — they make up virtually the entire population of Seattle and not even all Seattle cyclists would agree with the hardline Washington Bikes position.

That new ordinance is only the beginning of what must be done to improve Seattle for its pedestrians.

In an upcoming commentary, I will cover more about the larger challenges and necessary improvements for pedestrians in Seattle.