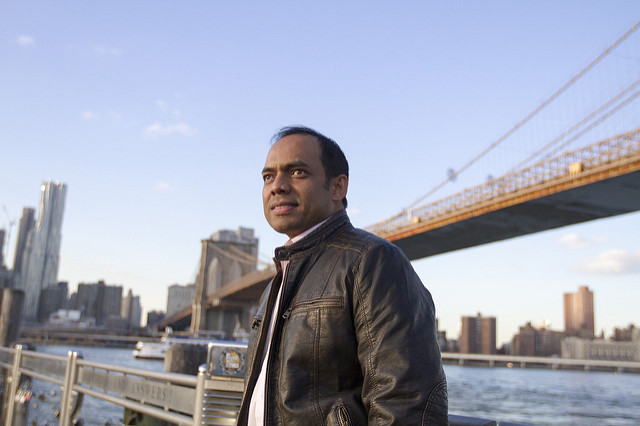 Rais Bhuiyan was shot in the face by a racist gunman 10 days after the 9-11 attacks. (Photo provided by World Without Hate.)

Ten days after the 9-11 attacks, Rais Bhuiyan was shot in the face by a racist gunman in Texas.

Bhuiyan, who is Muslim, was a convenience store clerk at the time. He had been held up before and this time, he thought he knew what to do when the gunman walked in. He emptied the cash register and put $150 on the counter.

But then the gunman, Mark Anthony Stroman, asked him: "Where are you from?” Bhuiyan knew he was in trouble; he is an immigrant from Bangladesh. He felt a chill go up his spine. Seconds later, Stroman opened fire with a sawed-off shotgun. The pellets that struck him felt like millions of bees stinging his face.

The gunman subsequently admitted to shooting Bhuiyan and two other men in revenge for 9-11, thinking the men were Arab.

But one of the reasons why Bhuiyan later garnered so much media attention was his response to the shooting that left him partially blind in his right eye. Bhuiyan not only publicly forgave Stroman, he spent months petitioning the court not to execute the gunman for his crime. “We all make mistakes. He’s another human being, like me,” Bhuiyan told The New York Times in 2011.

Bhuiyan's actions managed to change Stroman's views about Muslims and Islam before the gunman was executed in 2011. These days, he continues championing a message of forgiveness and compassion as well as educating the public about Islam through his nonprofit World Without Hate.

Bhuiyan, 45, who now lives in Seattle, is the keynote speaker at the Muslim Association of Puget Sound’s annual interfaith iftar on Wednesday. Iftar is the daily breaking of the fast during the month of Ramadan.

The interview has been edited and condensed for length and clarity.

You're still doing a lot of public speaking where you tell people about the shooting. Is that still painful to talk about? Do you get tired of talking about it?

Well, it is a very interesting question. To be honest with you, no, because what I have done in the meantime before even I came out in public, I went through a healing process where I was able to make peace with my pain. And when I say make peace, it's that I was able to overcome the anger, the sadness. When I talk about this story, it doesn't really bother me anymore. Sometimes it makes me emotional a little bit. Sometimes when I talk about details, sometimes it just sends me back to that painful incident where I can still see a gunman pointing a gun to my face, and I see he's about to pull the trigger. It just makes me emotional, but it doesn't make me sad or depressed or angry because I've overcome that.

I wasn't able to go to a psychiatrist at the time because I didn't have any health insurance. So the only option I had was to comfort myself through prayer, through self-meditation and also focus on the next right thing. I was completely focusing on different things rather than thinking about the shooting because it was of no value to think about again and again and keep myself sad, depressed, frustrated or angry. Faith was a big part of that. So was working and going back to school.

When you went on that campaign to try to save the man who shot you, did you have support from your friends and family or did some of them say to you, "What are you doing? You're crazy. This is the guy who attacked you."

What does Islam teach about forgiveness?

In the city of Ta'if, people tortured the Prophet Muhammad. He was near death. In that situation, Angel Gabriel came, and asked him that, “If you want to punish these people, God sent me to you and told me your desires, if you want to do that, I can pull this mountain together.” Ta'if is a beautiful city on top of a mountain, and the city is surrounded by mountains as well. So he said, “I will pull this mountain together to destroy this tribe as a punishment because of what they did.” But you know what Jesus Christ, peace be upon him, said: “Forgive them, they didn't know what they're doing.” The Prophet Muhammad said the same thing, that these people, what they did, was out of their ignorance.

So, this kind of story really helped me a lot when I was shot and went through severe trauma. And it really helped a lot to come up with the idea that revenge is not the solution.

Do you think this country’s perception of Muslims has changed since 9-11?

Charles Dickens said, “It was the best of times, it was the worst of times.” Yes, in some aspects it has gone down. At the same time, it has also helped a lot of non-Muslims to get to know about Muslims and Islam. But the sad part is that those who are suffering at this point because of their faith, because of the hate and fear coming out of our president, and from a lot of our leaders, is really sad and un-American. Because if you look at the history, this country was built by settlers, those who ran away from persecution because of their faith. But now in 2018, we are seeing what is extremely unexpected and unacceptable that people are getting tortured, people are going through challenges because of their faith, because of who they love, who they worship.

Why did you move to Seattle?

We moved to Seattle last October, but the first time I was in Seattle was in 2000, and I liked it very much. Before the shooting happened, I was able to see the beauty of Seattle with both eyes. I fell in love with Seattle because it's the city where people don't normally just talk. It's the city where people actually, you know, make things happen. For example, when the first Muslim ban came out from the White House, Seattle was the first city to take action and take it to court.

Tell me more about your nonprofit World Without Hate.

Since I could not save the life of my attacker, I thought maybe I'll be able to help people like him in the free world who are full of ignorance and intolerance and a lack of understanding and acceptance. So with that vision, I started this nonprofit in Dallas, Texas. And also to keep my promise to God, which I made on my deathbed that if I get a chance to live I would dedicate my life for others, especially for the needy, deprived and poor. Also, it was a part of my promise as well to keep my journey to inspire people to be compassionate and forgiving, understanding and accepting. We go everywhere nationally and also internationally.

Rais Bhuiyan will also be part of a panel discussion on Thursday at a screening of the Emmy-nominated web series “The Secret Life of Muslims.”

Editor's note: The first sentence was corrected in order to clarify that the shooting happened 10 days after 9/11.