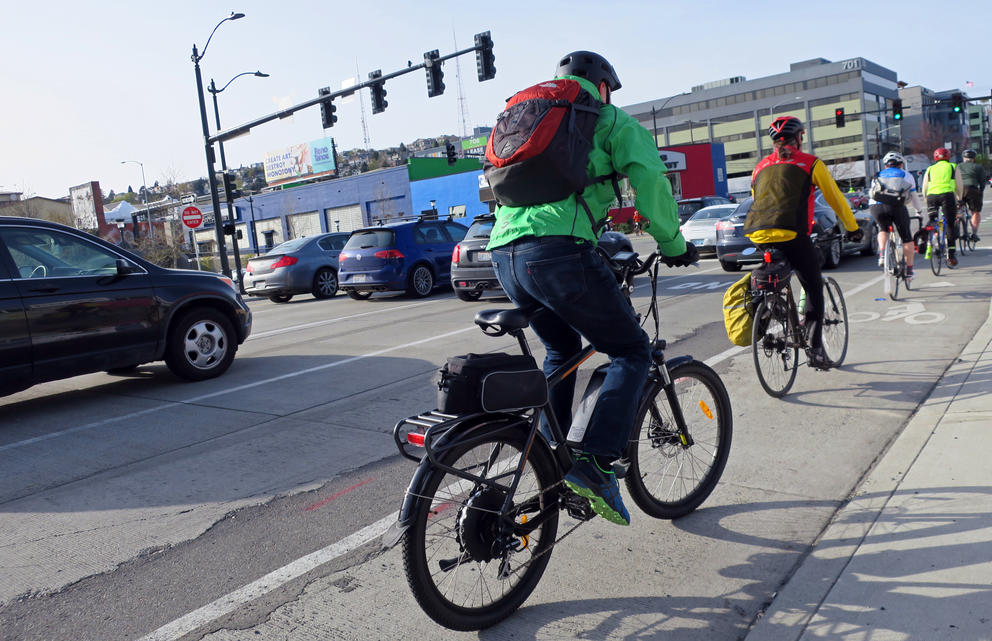 Using an e-bike, Chase Maben commutes from his job at Amazon along Dexter Avenue near Mercer Street. (Photo by John Nelson for Crosscut)

The power switch is on.

In the last three years, e-bikes have gone from fad to a verifiable movement in Seattle.

New companies selling direct-to-consumer e-bikes are popping up almost monthly. Baby boomers who gave up riding are getting back in the game, thanks to a little pedal-assist. Families who don’t want to buy a second car — or any car at all — are turning to kid-carrying cargo e-bikes.

And increasingly, Seattle’s workforce of mostly young professionals is going electric, using our network of dedicated bike lanes instead of sitting in traffic.

The bikes fly with almost no pedaling effort, allowing Seattleites to rocket up hills and get around the city with ease.

“You think about what factors are keeping people from riding a bike,” said Tom Fucoloro, founder of the popular Seattle Bike Blog. “One of them is our hilly terrain. Having an e-bike is going to change that calculus.”

There’s also a steady stream of bike commuters. Just after 5 p.m. — quitting time — a long line-up of cyclists waits patiently for the light on Mercer to change. And among them, increasingly, are e-bike riders like Chase Maben, who works at Amazon.

“I wanted to get a good commuter bike for work,” Maben said as he stood astride his Rad Power Bike, sold by a thriving e-bike company in Ballard. Maben lives on Queen Anne Hill near Seattle Pacific University. “It takes me 13 minutes to get to work,” he said.

The light changes, and off he goes as another set of riders moves into position at the intersection. Maryann Moore, who works in the Denny Triangle, pulls up on her Rad Power Bike.

“I bought it last September,” she said. The electric-assist bike “totally reduces the friction,” allowing her to travel to her home in Ballard in about 30 minutes, she said.

Most e-bike manufacturers say their main demographic is older riders — baby-boomers with mobility issues. But Maben and Moore are both young professionals working in the busy downtown core.

“As e-bikes are getting more popular with commuters, people aren’t necessarily going car-free — they’re going car-light,” he said. “In Seattle, you can often get to places faster on an e-bike than you can in a car.” 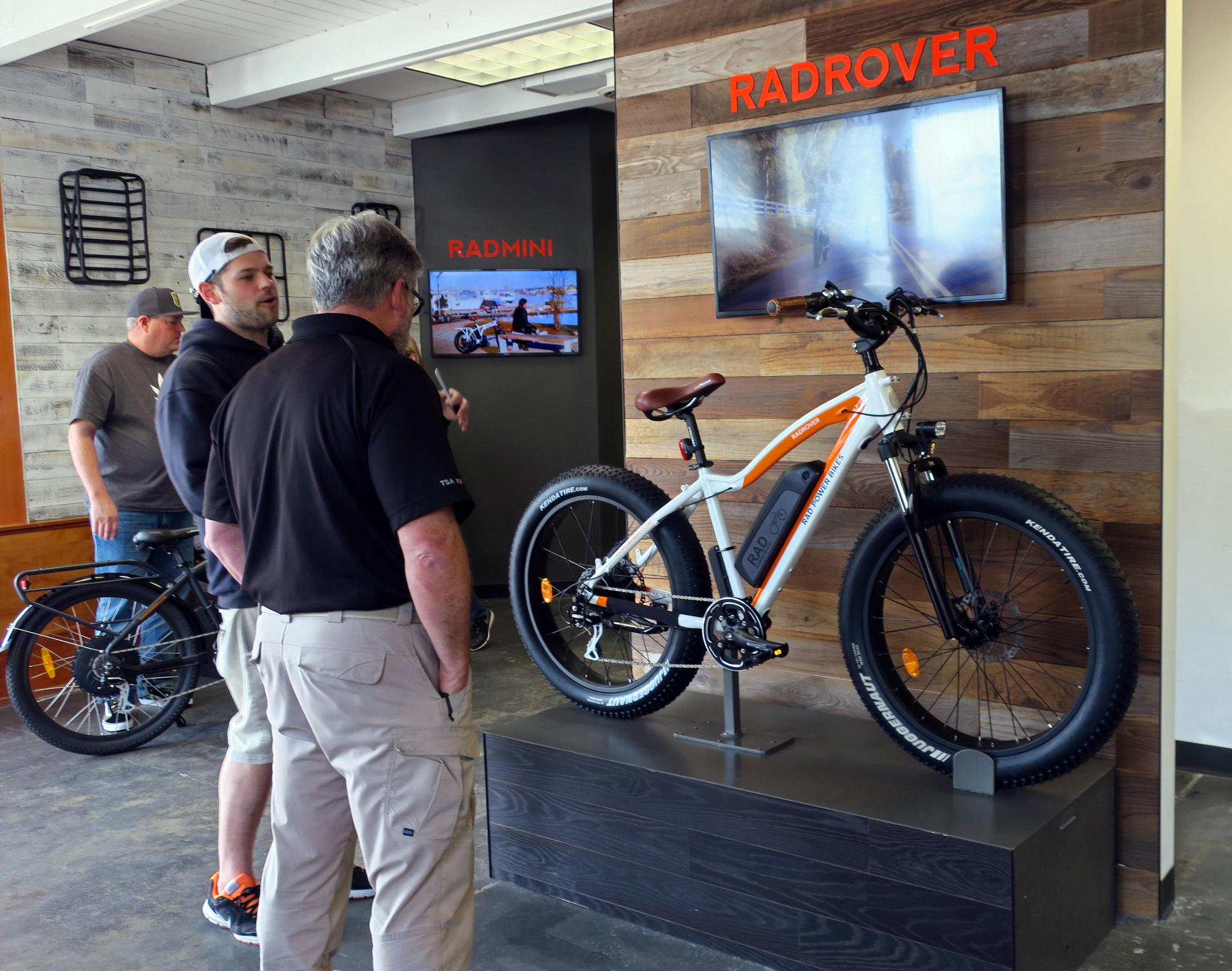 A customer checks out the Rad Rover, one of the models in the Rad Power Bike retail store in Ballard. (Photo by John Nelson for Crosscut)

A customer checks out the Rad Rover, one of the models in the Rad Power Bike retail store in Ballard. (Photo by John Nelson for Crosscut)

E-bike shops crop up around Seattle

Rad Power Bikes started in 2007 as a company doing e-bike conversions of conventional bikes, the brainchild of partners Mike Radenbaugh and Collins. In 2015, the company expanded with the help of a crowdfunding campaign and now is the biggest direct-to-consumer e-bike company in the U.S.

“By going consumer-direct, we’re able to charge wholesale prices,” Collins said. Unlike shops that get bicycles from manufacturers, Rad designs the bikes, has them built in China and sells them directly, cutting out distributor and dealer margins.

“Whether it’s bikes or mattresses or groceries, everything is going consumer-direct,” Collins said.

Rad bikes start at about $1,500. Collins said the company still sells most of its bikes online, but many people want to come into a store and see them in person.

It’s a model that’s being repeated at other new e-bike companies in the Seattle area.

PIM’s bikes are even cheaper than Rad’s, starting at about $1,000. Evelo’s bikes start at $2,000, and while priced higher, the company offers perks like a four-year warranty.

E-bike shops have been around in the Seattle area for years, sold by pioneers like Electric and Folding Bikes Northwest and Seattle Electric Bike. Now shops selling e-bikes can be found in all corners of the city.

In the last three years, motors and batteries have improved considerably. Hard-core cyclists may have a prejudice against e-bikes, but that attitude is changing, Seattle Bike Blog’s Fucoloro said.

“Almost nobody has a problem with them," he said. "Some purists might say that if it has a motor on it, it’s not a bicycle — it’s a motorbike.”

As the e-bike movement goes more mainstream, states are adopting laws on how to classify them, and which bikes should be allowed on shared paths.

Class 1 and Class 2 bikes are allowed on shared-use paths and bike lanes; Class 3 bikes are legal on streets only and riders must be older than 16.

“20 mph is the number we’ve decided is a safe speed,” Fucoloro said. “That makes sense as a line to draw. That helps e-bikes to remain bicycles.”

How e-bikes are transforming the market

The brave new world of e-bikes is already changing retail at some of Seattle’s biggest bike shops.

“E-bikes already are a substantial part of our market,” said Marty Pluth, general manager of Gregg’s Cycles, one of the Seattle area’s biggest bike retailers. “It’s the fastest growing segment of our business.”

Gregg’s has been selling e-bikes for 10 years, but over the last three years, Pluth has seen the market change substantially.

“Over time, the product has developed and matured,” he said with sales doubling each of the last three years.

Another shop embracing e-bikes is G&O Family Cyclery in Greenwood, which has found a niche selling family-friendly cargo e-bikes suitable for carrying the kids and making grocery runs. G&O also has top-line German-made commuter-style e-bikes from Riese & Muller in the $5,000 range.

“A lot of the folks who would be a two-car family are getting a cargo bike instead of another car,” said Tyler Gillies, co-owner of the shop.

Cargo bikes for businesses and institutions is another growth area for e-bikes.

The University of Washington has started doing campus mail deliveries using e-bikes instead of vehicles. And Fucoloro said many Seattle deliveries could easily be accomplished by e-bike, helping relieve traffic congestion. Cargo e-bikes come in many configurations, with spaces in the front or back to carry loads, and typically fall in the Class 1 or 2 categories.

“The potential is there for big cargo bikes in downtown,” he said.

Many food delivery services already use e-bikes. And police in several Puget Sound area communities, including Normandy Park, Bothell and Federal Way, are incorporating them in their patrols.

We’re just beginning to scratch the surface of discovering all e-bikes can do, Fucoloro said.

“I think they can have really wide appeal as the manufacturers refine how they look and operate,” he said.

If you want to try an e-bike yourself, Fucoloro suggests hopping onto one of the new LimeBike assist models in Seattle’s bike share program.

“LimeBike really nailed the design,” Fucoloro said. “They’re cheap to try out and extremely simple to use.”

A previous version of this article incorrectly stated a license is required to operate a Class 3 bike. We regret the error.