The NFL missed the whole meaning of protest 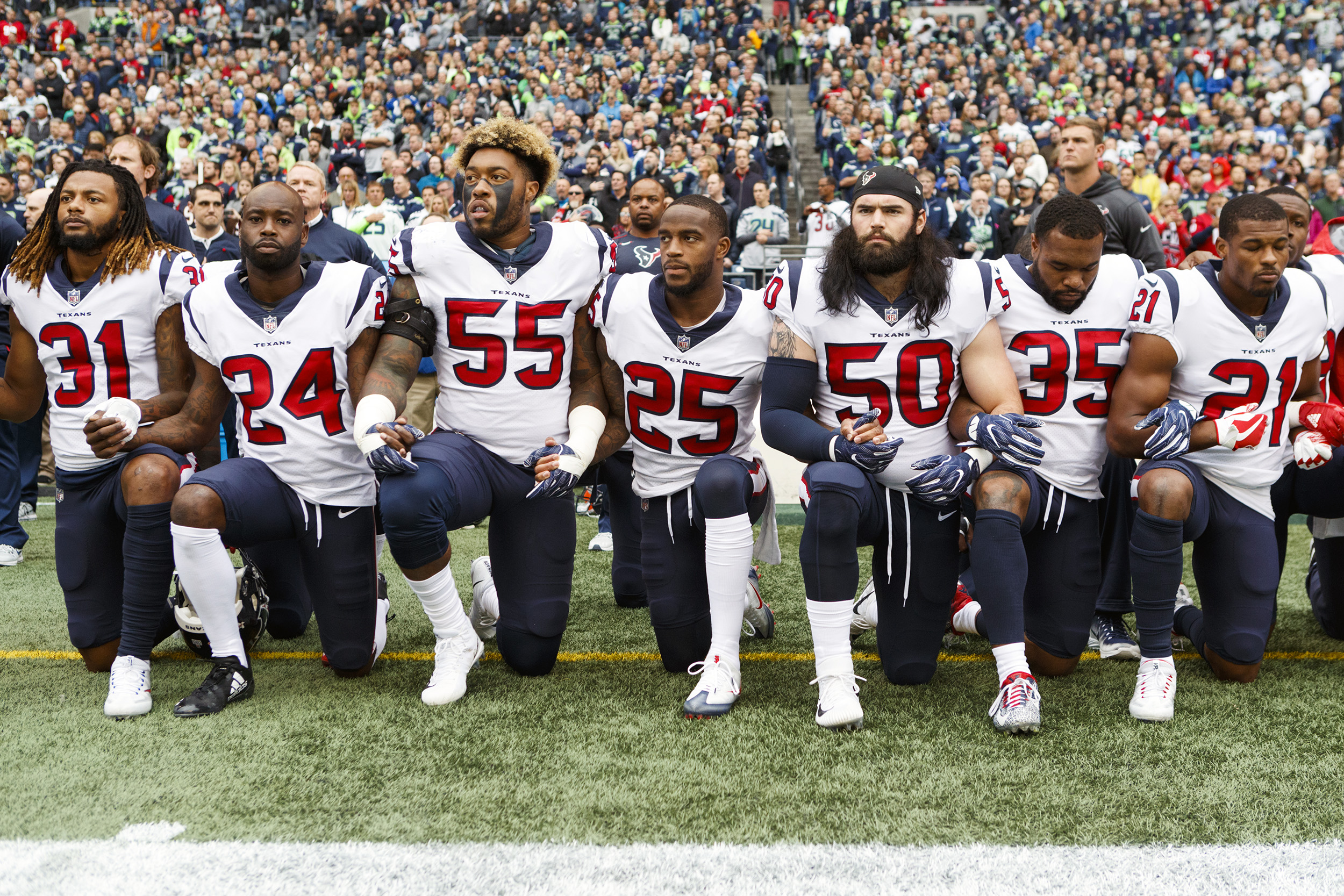 Members of the Houston Texans kneel during the national anthem during an NFL football game against the Seattle Seahawks, Sunday, Oct. 29, 2017, in Seattle. The Seahawks defeated the Texans, 41-38. (Ryan Kang via AP)

If you said yes, you're probably an NFL owner or a patron of the status quo.  If you said no, you might well be an African American NFL player who resents the hell out of being told to stifle yourself.

The question arose after Tuesday's allegedly unanimous vote by the owners — San Francisco 49ers owner Jed York already said he abstained — to fine a team if any of its personnel sit or kneel during the national anthem. Since it's the teams and not players who will pay, that also helps assure that Colin Kaepernick and others of similar mindset will not be hired.

After months of debate on a controversy that shook the league last year, the owners compromised regarding mandatory sideline attendance: Players may choose to sit out the anthem in the locker room before returning to the field.

In other words, you kids can go nuts in the backyard, but when the grandparents arrive, come in, shut your pie holes and be nice.

"We want people to be respectful of the national anthem," NFL Commissioner Roger Goodell said in a statement. "We want people to stand — that's all personnel — and make sure they treat this moment in a respectful fashion. That's something we think we owe. [But] we were also very sensitive to give players choices."

But the entire purpose of protest, regardless of subject or side, is a call to attention and a disruption of the comfortable. To suggest that hanging out in the locker room ahead of a belated appearance is somehow ... well, several guys every game do that to use the toilet.

The Seahawks last season were at the epicenter of the protests. They had activist player leaders such as Michael Bennett, who was joined by up to a dozen teammates in the pre-game sit downs, a sympathetic coach in Pete Carroll, and a tolerant owner in Paul Allen, operating in a city as far left as one can go without bumping into San Francisco.

That doesn't mean all fans and all players were supportive. Much as with the rest of America, fractures were visible.

On the late September weekend when President Trump said players who protested over racial injustice and police brutality were "sons of bitches" who should be fired, the Seahawks were flying to Nashville for a game against the Tennessee Titans.

Players and coaches abandoned the usual road routines and spent hours in meetings deciding how to respond to Trump's provocations. The meetings grew heated, with some players, Black as well as White, wanting no part of a protest.

Eventually, the team decided to do what the owners Tuesday gave them the option to do: They stayed in the locker room until after the anthem. The less-woke Titans, bewildered by the turmoil, called the Seahawks on Sunday to ask what the players planned. After being told, the Titans basically said OK, we'll do that too.

Neither team was on the field for the anthem — just as it was by custom in the NFL prior to 2009, when the league decided to pander to its baser instincts of staged patriotism and ordered assembly on the field.

The Seahawks lost, 33-27. At the time, Carroll denied the disruptive meetings had impact on the outcome. But after the season ended with a playoffs-free 9-7 record, he came clean.

Carroll didn't directly blame his indulgence of players' political expressions for the loss. But there's little doubt that supporting players' sensibilities in a national controversy while trying to win on the road was a management nightmare.

That is part of why the owners, all but one White, have been wrangling since then about an appropriate response to political anger in a workforce that is more than 70 percent Black. Owners don't want to piss off the help until their usefulness has expired.

Another part of the urgency was a decline in TV ratings, which some attributed to audience annoyance with racial politics intruding into the secular church of Sunday football. No one had any proof, but NFL critics made it sound logical.

To avert more trouble, the NFL made the anthem-conduct changes to the game-operations manual, which is not subject to collective bargaining. The NFL Players Association said in a statement that it will review the policy and "challenge any aspect" that is inconsistent with the collective bargaining agreement.

Meanwhile, the Seahawks this offseason managed the protest issue another way: For little in return, they traded Bennett to Super Bowl champion Philadelphia. Football reasons were plenty: Bennett’s age (32), contract size, increasing frequency of injuries. But the bosses also seemed to tire of the constant buzz around their outspoken player; in some sense, the same thing was likely another reason behind the release of cornerback Richard Sherman, who was signed as a free agent by the 49ers.

It probably didn't help Bennett in house that he was working on a book titled Things That Make White People Uncomfortable. The book came out in February, and proved less provocative and more insightful than the title may have indicated.

One passage addresses the anguish he felt when some fans blasted him on social media for being unpatriotic, which was a complete misrepresentation of the purpose of the protest. He wrote:

Of all the responses, what bothered me the most was when people said I was dishonoring the military. It got under my skin because I also heard from a ton of veterans who said, "We wore the uniform precisely so people would have the freedom to protest." It bothered me because my father was in the military. I love my father but I don't love the hatred I see growing in this country. I love the soldier who, after I started my protest, sent me an American flag from Afghanistan, shaded by dust and dirt from thousands of miles away, and said he stood with me.

More than many, Bennett had the courage of his convictions. As such people almost always do, he paid a price — he made his bosses uncomfortable enough to move him.

It will be the Eagles' problem to find out whether Bennett unifies or alienates. Just as it will be for NFL regarding its altered protest policy.

Since it's hard to find in any group of three Americans two who agree on what the flag represents, the guess here is that the NFL has come up with a compromise that pleases no one. Since we are a polarized people who no longer compromise, the players and owners will mimic the national political discourse — figuring out workarounds to make sure their side wins and the other side loses. After getting nowhere, one year from now they'll try again.

It will be harder to watch than last season's Seahawks running game.