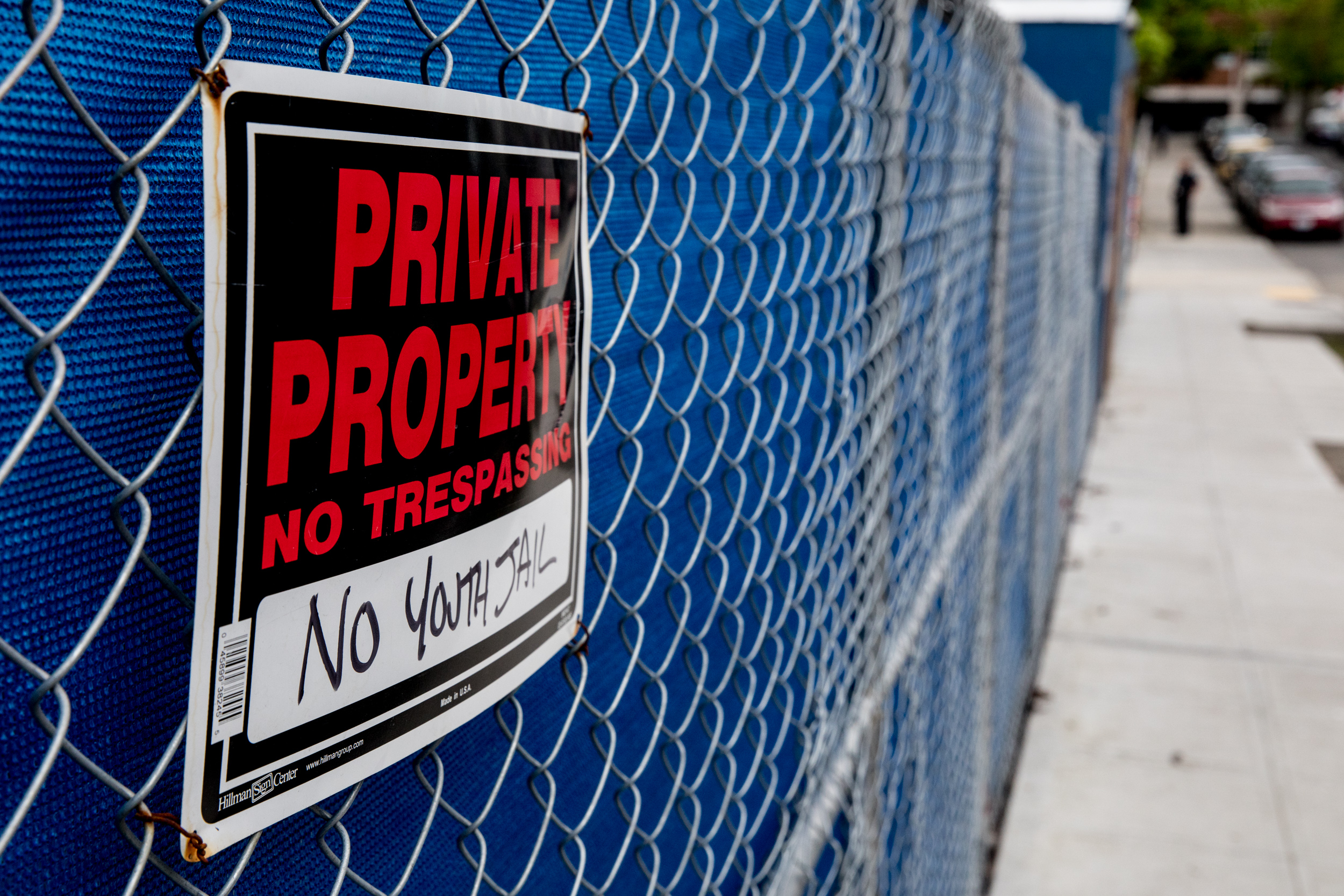 The site of the new $210 million Children and Family Justice Center in Seattle at 12th Avenue and East Alder Street. (Photo by Matt McKnight/Crosscut)

Although the Pacific Northwest is known as one of the least religious pockets in the country, clergy and other people of faith have been instrumental in one of Seattle’s key ongoing fights: the battle against the building of the city’s new $210 million Children and Family Justice Center.

After making headlines when police arrested nine people of faith at a protest last month, clergy members ranging from rabbis to pastors say they have no intention of letting up until construction of the project, which includes a youth detention center, and is often referred to as the new youth jail, is stopped. They're calling on King County officials, including King County Executive Dow Constantine, to meet with community members to develop an alternative plan.

Rabbi David Basior, 39, is a rabbi at the Central District's Kadima Reconstructionist Community, a synagogue that bills itself as progressive and committed to racial, economic and gender justice. He first became involved in the no jail movement after moving back to Seattle in 2015.

By the time he finally made it to Washington, Basior said, “I was looking to figure out what that movement looked like locally.”

Basior calls the construction of the new youth jail the result of a “lack of imagination” and the unwillingness of regional leaders to sit down to contemplate alternatives “as if it’s a real, open question.” Basior says his views are informed by the Jewish concept of teshuvah, or repentance, which calls for sins against others to be atoned for by righting wrongs.

“I believe racism is real," Basior says. "A real harsh way this shows up in our society is by putting humans in cages.”

“We can recover what has been lost at all times,” he continues. “Sometimes that recovery is a lifetime journey… other times it’s a quicker fix.”

On Sunday, Basior published an editorial in the South Seattle Emerald entitled “Why I Will Never Stop Protesting the New Youth Jail.” Like other faith leaders, Basior believes the movement against the youth jail is too consequential to give up.

“The outcome of this fight, for a facility designed to last at least fifty years, will define how future generations of Black and Brown youth will be treated in this county,” Basior wrote.

“Their prayer requests are for freedom,” Goodwin says of those currently incarcerated. “None have prayed for a more robust youth jail.”

“Each and every one of them requests freedom.”

“Inherit in my church’s name is this notion of liberation,” Goodwin says. “Imprisoning our youth is an immeditie block to that liberation.”

Goodwin, 36, says he oftens preaches to youth about hope and not allowing disadvantages to hold them back. But delivering that message to imprisoned kids is difficult, Goodwin says.

“It’s almost like you become disillusioned with what we are as a city,” Goodwin says.

Goodwin also says unlike the millions of dollars that officials are pouring into the youth jail, he doesn’t see anyone “making that same kind of investment in educational opportunities.”

He calls the protests “the most beautiful invitation to listen. And say, OK, we need to do something different.”

“Faith communities suffer when we are irrelevant. And this is a moment in history when faith leaders have an opportunity to be relevant,” Goodwin says. “This is when a faith community becomes part of the real, tangible world.”

“If we cannot do that then we are saying as faith communities we are worthless,” Goodwin says. “I don’t have a choice but to be there. Because I feel like my faith is on the line.”

Religious leaders, and other protesters, have been involved in the anti-youth jail movement for years. In the Fall of 2015, approximately 20 churches from around the region participated in a letter-writing campaign. “I plead for you to reconsider your project,” read one letter addressed to Howard S. Wright, the construction company hired to design and build the complex. “There are OTHER WAYS.”

“My faith compels me to work towards dismantling dehumanizing systems of oppression,” read another letter. Yet another talked of following “the lead of Biblical prophets such as Moses and Jesus, who challenged the powers of their time to listen to the voices of the oppressed and to establish justice with a beloved community.”

Claire West, an Episcopalian leader of the no youth jail movement, says “we don’t like to think of Jesus as pissed off ever” but the Christian duty is to “name corruption when we see it and name our complicity in it.” Faith leaders attempted to deliver the letters to Wright the following year but were rebuffed. They then plastered the letters on the construction site itself.

Their activism escalated last month when a group of clergy members gathered in the early morning of April 20 to form a circle, pray and sing. They stood at the construction site of the new jail, located next to the current facility at 12th Avenue and East Alder Street. They held signs that read “What would Jesus do: not cage kids” and “Jews against jails.”

And they singled out the King County Executive.

“Dow still has a chance to make it right. We are offering him reconciliation. He can change his legacy. He can have a new lease on life...He just needs to negotiate with this community about what all these resources should be repurposed for.”

Couldn’t the money earmarked for the jail be used for housing, homelessness, or for health care instead, they asked?

About a half hour later, police arrived. Three people of faith locked themselves to a steel beam inside the construction site.

Basior — dressed in a prayer shawl and Tefillin, or small leather boxes containing biblical texts — and others sang hallelujah while police began making arrests after warning the group to disperse. Seattle City Council members Kshama Sawant and Mike O’Brien, who are opposed to the jail, immediately called on Seattle City Attorney Pete Holmes and Police Chief Carmen Best to release those in custody.

Organizers of the protest said they planned the event after Constantine ignored a March letter asking that he halt the project. The letter noted the six-year opposition to the project from various sectors of society, such as health professionals and Native American leaders. It also pointed to the Seattle City Council’s 2015 ordinance calling for zero youth detention.

On March 26th, Constantine responded to the protesters' letter by saying: "I do not believe keeping kids in the current decrepit and disrespectful facility is the right solution." In September, the appeals court of Washington State ruled the county had been illegally collecting property taxes to fund the jail’s construction. King County has appealed the September ruling to the Washington Supreme Court.

County officials point out the youth detention population has declined almost 70 percent over the last decade. In a state of the county address last year, Constantine himself said “everyone is determined that we must work together to reach the point where we rarely, if ever, need secure detention to protect the community because we have better, safer, more therapeutic options.”

County officials say the new Children and Family Justice Center opening in approximately two years will offer more space to connect youth and families to services and nonprofits. It will have 112 detention beds — 100 fewer beds than the current facility has — and offer childcare, Family Intervention and Restorative Services and Drug Court, which gives youth the opportunity to participate in court-monitored treatment. Of the $210 million being spent on the project, $40 million will go toward building the detention portion of the facility.

But like other clergy, Pastor Beth Chronister, a 33-year-old minister of social justice and pastoral care at University Unitarian Church, believes the county could do more to end the school-to-prison pipeline.

Chronister was one of the protest leaders arrested last month. Although she is hopeful construction of the new youth jail might end because “there are more people waking up to what’s going on,” she said when she was arrested she thought of the fear incarcerated teenagers experience when they are taken into custody, and found it “heartbreaking and profound.”

Chronister says she sees incarcerated youth as her own.

“I’m of the belief that there’s no such thing as other peoples’ children,” Chronister says. “They are the children and youth of King County, and we owe them better.”

Editor's Note: This story was updated to clarify the amount of money King County is spending on the detention portion of the facility.