Workers of the world, unite — against Kshama Sawant 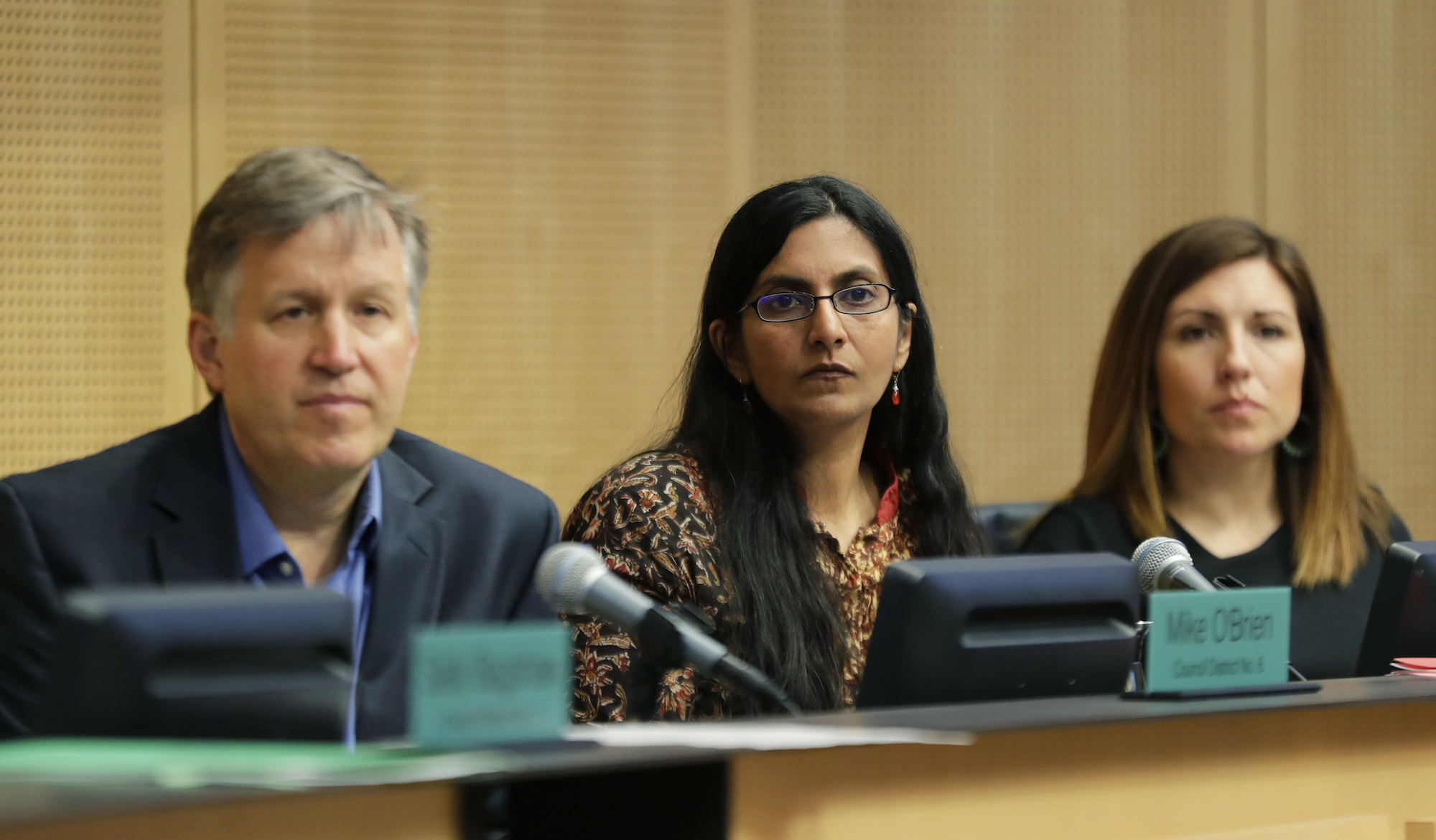 City councilmembers Mike O'Brien, Kshama Sawant and Teresa Mosqueda listen to comments on a proposed tax during a committee meeting at City Hall on May 9. (Photo by Ted S. Warren/Associated Press)

A video of angry construction workers repeatedly chanting “No Head Tax!” as socialist councilmember Kshama Sawant addressed reporters in front of Amazon headquarters was the flashpoint, the moment, when Seattle politics started to change.  After years of leftward drift, Seattle’s rank and file abruptly pushed back at the anti-business ideology saturating city government.

You could see it in the expressions of Sawant’s supporters. Not fearful, but bewildered and confused. The usually unflappable Sawant was clearly thrown off stride, setting aside her remarks and appealing to her “brothers” as a “fellow member of a trade union.”

It didn’t work. The hard hats instinctively know that Sawant’s left wing populism is anti-business and anti-business means anti-jobs. Their jobs. Never has the gulf between socialist rhetoric and economic reality been more vividly displayed in this city than it was last Thursday.

The anger is happening all over. It boiled over at City Councilmember Mike O’Brien at last week’s town hall in Ballard. It was apparent in the enmity expressed by Green Lake neighbors at the filth and crime linked to an illegal homeless encampment that sprang up within hours near their homes. And also in the indignation of those with loved ones at Bikur Cholim and Historic Sephardic Jewish cemeteries in north Seattle, where the grounds have been used as brothels and bathrooms, and meth was being snorted from gravestones, with needles discarded nearby.

Why did it all come to a head last week? Too much "looking away" has begotten intolerable behavior on a scale that cannot be ignored any longer. As someone who has lived in and around Seattle for more than a half century, I’ll make a prediction: Next year’s council elections will feature a “reform slate” of candidates running on respect for the law, respect for other people and respect for business. First two targets on the list: Sawant and her mini-me, Mike O’Brien.

The two of them justify the $500 per employee head tax on companies grossing $20 million (regardless of profit margin) on the grounds that Seattle needs the revenue for homeless programs, and that Amazon’s prosperity helps accelerate the proliferation of homeless tents pockmarking more and more neighborhoods throughout the city.

But is Seattle’s losing battle against homelessness really about money? There is $195 million spent by government at all levels per year on housing and homeless programs in Seattle-King County. The city spends nearly $63 million on the homeless, twice as much as it did five short years ago. And the results? A 44 percent spike in homelessness in just the past two years. Thirteen years ago, city and county leaders launched an unprecedented campaign to provide more housing, more services, more outreach, more counseling and more understanding to “end homelessness in 10 years.” That money – and a lot more – was spent and is still being spent, and homelessness has nearly tripled.

Has anyone lost their job over this sorry performance? Has anyone apologized? How about reversing course and trying different approaches? No, no and no.

Is this happening all over? No. University of Pennsylvania professor Dennis Culhane told The Weekly Standard’s Ethan Epstein that while homelessness is soaring in a select few cities (Seattle, Portland, San Francisco, Los Angeles, Washington, D.C.), it’s rising by only 1 percent nationally.  Most of America is seeing a reduction in homelessness while the problem continues to worsen here.

Why? Because city government deliberately allows people to break the law. All sorts of laws. Laws against illegal camping. Laws against using sidewalks as bathrooms. (If your dog drops a deuce on the sidewalk, you’ll get hit with an expensive ticket. But if a person does it, there doesn’t appear to be any penalty at all.) Laws against drug use in public. Laws against sleeping on sidewalks. Laws against untabbed, dilapidated RVs parking for days and weeks without moving. Laws against public intoxication.

It’s the broken windows theory in reverse: Instead of cracking down on low level offenses that fester and lead to a crime-ready environment, the city has done precisely the opposite: Do nothing and don’t make judgments. Result? As Gene Balk reported in the Seattle Times last Oct. 20, FBI data show that Seattle now has the sixth highest property crime rate in America’s 50 largest cities, and the largest among its top 20.

Sawant and O’Brien argue that the homeless have nowhere to go, and shelters are filled. Again, untrue. The Salvation Army’s downtown Adult Recovery Center (disclosure: I’m on the Salvation Army’s Advisory Board), offers safe, clean, dry housing, three meals a day, ongoing 12-step programs, activities and work to keep residents busy and a six-month stay with an extension allowed – all for free. A third of their beds sit empty. More would be if they weren’t filled with people from other places.

Reason? The great majority of homeless campers, almost all of whom are drug users, aren’t interested. They don’t want treatment, they don’t want to stop using, they won’t stop illegally camping and they are intent on doing whatever is necessary to get the drugs to get high. Seattle’s government and battery of social service activists and organizations has nurtured this culture, and grown it. That is why we spend more and the problem worsens.

You can certainly make the case that the prosperity generated by Amazon’s boom has raised property values, and along with them home prices and rent. But few of the people in tents are law-abiding working people who were priced out of their apartment by a rent increase so they decided to camp on the sidewalk. The tents and dilapidated RVs that scar Seattle are directly caused by a government enabling indifference toward the law, addled by drugs, booze and mental illness. They would be here with or without Amazon. And they are in no hurry to go.

So now, thanks to the dividing line drawn at last week’s events, we have two directions to go in to deal with this, the most visible subset of Seattle’s homeless population. First, start enforcing laws that are being broken with impunity. Or second, blame Amazon and raise their taxes.

The eruptions of last week suggest that everyday Seattleites want the former, and have lost patience with the political defenders of the latter.