On grizzlies, Washington can learn from Montana 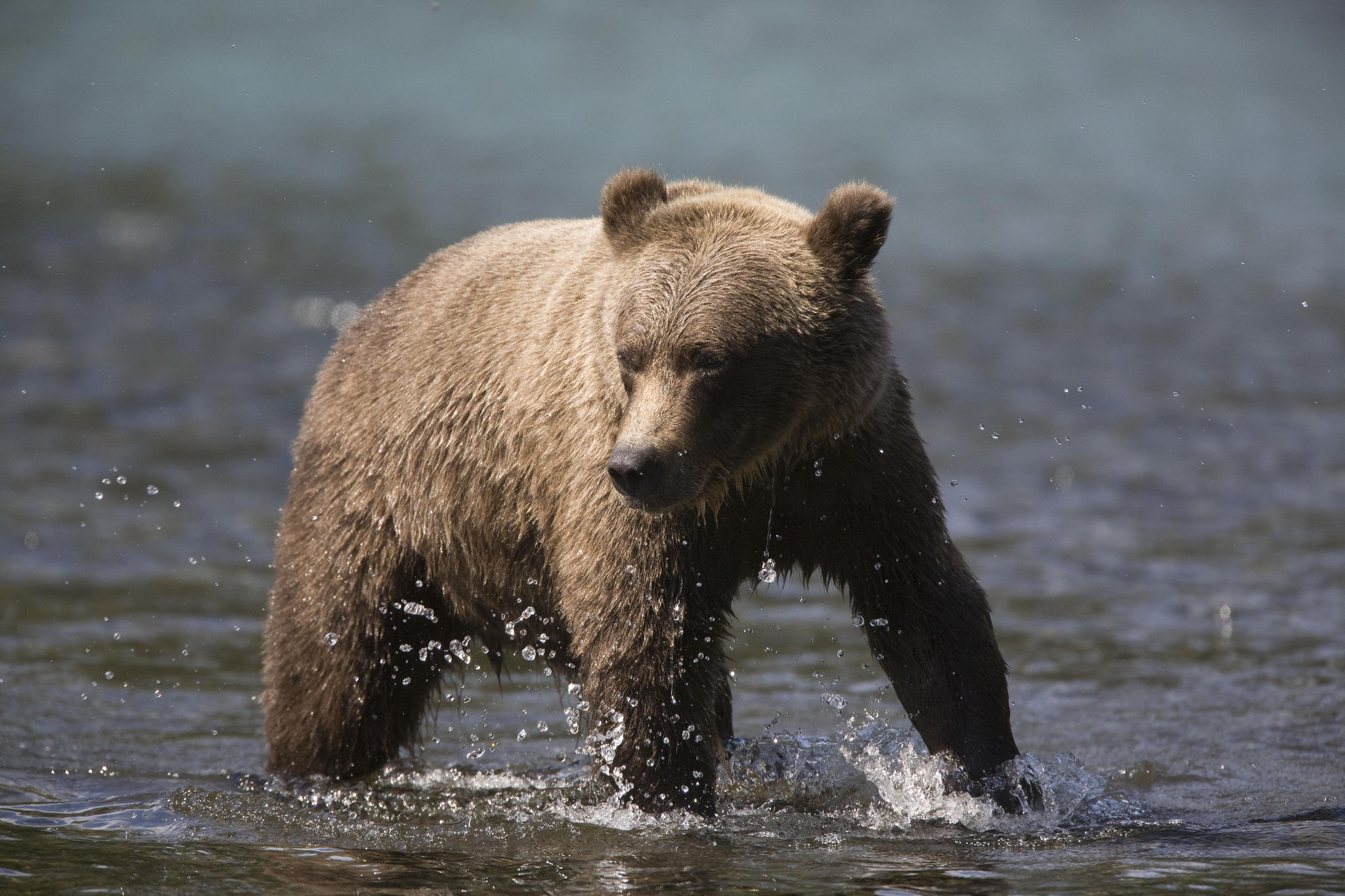 Rancher Dave McEwen knew something was wrong with his sheep. But he wasn’t sure what. He was checking on his flock early one morning.

The first sign of trouble was the ewes’ nervousness.

Then McEwen came across the disturbing sight of a sheep carcass. The fatal wounds suggested a more violent kill than when the coyotes attack.

“I’m in denial. I don’t need this nightmare. I’m going into a little bit of a blind rage here at that time,” McEwen recalled.

He found more clues to confirm the nightmare: grizzly bear tracks in the mud. Two right front prints, two different sizes. This was the first time McEwen had seen evidence of grizzlies on his property in Montana’s rolling Sweet Grass Hills, six miles from the Canadian border.

McEwen said 13 sheep were confirmed killed that day. (He said he lost more sheep because he had to remove coyote traps once the grizzlies were confirmed – the coyotes killed 75 lambs in the next several weeks.)

As a Montanan, McEwen has watched grizzly bears recover in his state and spread east toward his home. The grizzlies’ expanding range keeps him up at night. He’s a rancher who is learning under duress to adapt to life with grizzly bears.

It’s part of Montanans’ sometimes grudging progression beyond questioning whether grizzly bears belong in their midst. More and more, they’re working on a different question: how they can minimize conflicts with grizzlies, a key to the bears’ success.

Ranchers and conservationists alike say what’s happened with grizzlies in Montana could be a guide for the Evergreen State, where the bears are in big trouble — but on the verge of getting reinforcements.

Grizzlies In The North Cascades

Biologists estimate there are fewer than 10 – maybe even fewer than five – grizzlies roaming Washington’s North Cascades. Without help, they say, these bears will vanish from this landscape.

It’s in this wild, remote space that the federal government is considering reintroducing grizzlies. Interior Secretary Ryan Zinke made a surprise visit to Washington in March to reopen a study about the best approach to help the bears in the North Cascades.

Zinke said his support for the “great bear” was partially informed by his own experiences, growing up on the edge of Montana’s Glacier National Park, a wild place that’s famous for its grizzlies.

“I’ve dealt with the grizzly bear all my life,” he said.

So has James Jonkel. He manages bears and mountain lions for Montana Fish, Wildlife and Parks. This line of work runs in the family – his dad managed bears while Jonkel was growing up. Back then, Jonkel said, regulations and wildlife were wilder.

Now, he deals with human-animal conflicts on a daily basis.

When Jonkel gets a call about a grizzly that’s gotten into a chicken coop or bird feeder, he often heads to people’s property to figure out exactly what’s attracting the bears.

“When I get there, I see, ‘Oh it’s this salt lick,’ and grab the salt lick and put it inside. Or I’ll move the garbage into the garage. And I’ll say, ‘Oh, you don’t have any room in your garage, let me move some stuff for you,’” Jonkel said.

People can inadvertently train bears to find easy sources of food. It could happen in one night. That’s when bears become a nuisance. Some residential areas become “mortality sinks,” where people refuse to change their own behavior and bears keep getting into trouble — and eventually have to be euthanized.

Jonkel said his job is at its worst when people lose livestock or a kid in 4-H Club has lost all their animals.

“It’s tough to explain to them that we’re going to trap the bear but it’s going to be relocated, and they just can’t understand that,” Jonkel said.

In Washington, it may take a long time to get to that point. Right now, biologists say it could take up to 100 years for there to be enough grizzlies to be seen on a regular basis. But it is a point to take some lessons from.

Some ranchers upset by the growing grizzly population in Montana don’t feel like they have many options to protect their livelihood and property. McEwen, the rancher who lost sheep after grizzlies moved into his part of the state, wants to see a more permanent solution for problem bears other than just transporting them farther away – he says they need to be killed.

“The bear has more rights than you do,” McEwen said.

He said each week grizzly issues are escalating around his home, “faster than you would believe.”

“It forces people to take a hard line,” McEwen said. “We’ve taken a hard line against wolves and we’re going to take one against grizzlies.”

Reintroducing and relocating grizzlies has always been a tense topic. In Washington, a 1993 public meeting in Okanogan County got so unruly that at one point, a woman spat on a Fish and Wildlife Service public information officer.

Chris Servheen has seen it all. It was his job to bring Montana’s grizzlies back from the brink.

“I was very concerned that I had an impossible task. And what I would do is oversee the demise of the grizzly bear because I couldn’t get everybody to work together,” said Servheen, the now-retired grizzly bear recovery coordinator for the U.S. Fish and Wildlife Service.

The bears had landed a spot on the list of animals whose numbers were so low they were considered to be threatened with extinction under the Endangered Species Act.

With all the tension, it helped that Yellowstone bears were so well known and iconic. They’d been featured on National Geographic television specials and documentary films. Servheen said the high level of public awareness eventually helped galvanize agency support for recovering grizzlies.

Thirty years – and lots of work – later, the federal government has lifted protections for grizzly bears in the Greater Yellowstone Ecosystem, which includes Yellowstone National Park. It’s mainly in Wyoming, reaching across the state line into a small portion of Montana.

In other parts of Montana, the bears are expanding their range.

One of the state’s most successful grizzly habitats is known as the Northern Continental Divide Ecosystem in the northwestern part of Montana.

Those bears have been moving east – into prairie lands they haven’t occupied for decades.

“Their distribution has expanded quicker than we thought they would,” said Hilary Cooley, the current federal grizzly recovery coordinator. “One of the toughest challenges — at least in this ecosystem — is that people who haven’t had to deal with bears for a while are figuring out how to live with them and how to make a living.”

Defenders of Wildlife’s Russ Talmo said it’s all about teaching people to learn to live with grizzlies, even if everyone doesn’t see eye-to-eye about how grizzly bears should be managed.

To that end, Defenders of Wildlife provides funding and helps install electric fences, which many people say are one of the best ways to keep grizzlies off private property.

For people in Washington looking to Montana, there could be some clues to moving forward with reintroduction efforts. Biologists say the Cabinet Mountains in Northwest Montana could be a model for the North Cascades.

By the 1990s, the grizzly population had dwindled in the region – into the single digits. The federal government trapped bears in Canada trucked them overnight into Montana and released them the next morning.

“This (was) the first time that we ever really moved a non-problem bear from one location to another in order to bolster or assist that target population,” said Wayne Kasworm, who works with the U.S. Fish and Wildlife Service in the Cabinet Mountains and North Cascades.

The government has slowly moved the bears in, recently transporting at most one or two bears a year, Kasworm said. Now, the population is up to around 60 grizzlies – 14 of them offspring of transported bears. The goal is to bring their number up to 100.

Biologists move young, female bears from the backcountry, animals with no history of food conflicts with people. They time the relocation to coincide with periods when wild foods like berries are abundant in the Cabinet Mountains.

“It has allowed this population to persist. We see it growing. We will continue for a while, but our goal here is actually to have bears move in and out of the Cabinets on a natural basis rather than bringing them in with a pickup truck,” Kasworm said.

In Washington’s North Cascades, reintroduction proposals vary, but the government’s reintroduction plan ultimately would bring the grizzly population to 200 bears over a 100-year period.

The federal government’s choice on whether – and perhaps how – to reintroduce grizzlies into the North Cascades is due out by the end of the year.

For his part, Interior Secretary Ryan Zinke thinks it could be done.

“I’m not going to make a prejudgment, but I can tell you the winds are very favorable,” Zinke said.