Will the state learn from another loss on tribal fishing rights? 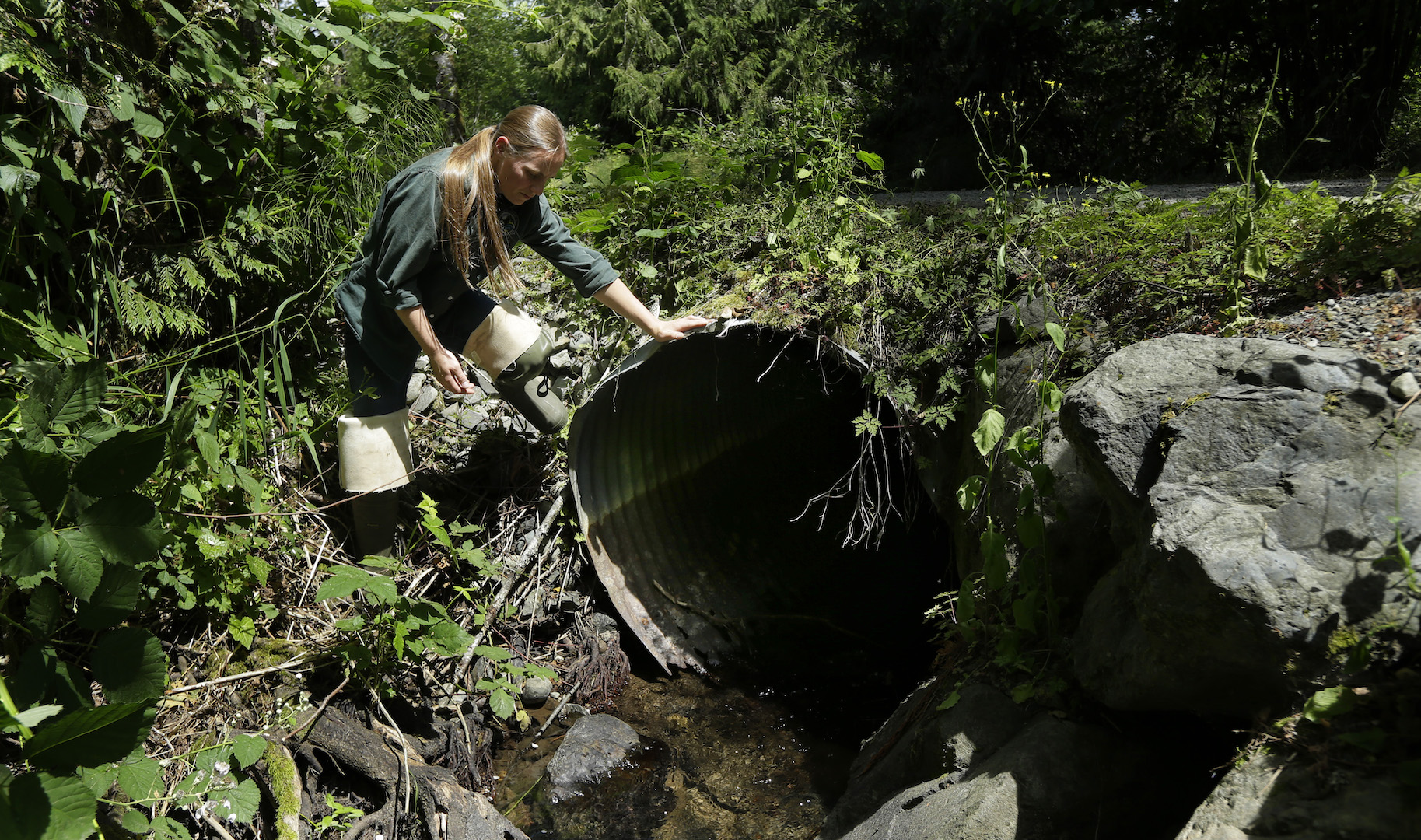 In this June 22, 2015 photo, Melissa Erkel, a fish passage biologist with the Washington Dept. of Fish and Wildlife, looks at a culvert along the north fork of Newaukum Creek near Enumclaw. The culvert was slated to be replaced by a private landowner with a wider bridge designed to let fish pass naturally along the creek more easily. A ruling by the U.S. Supreme Court on Monday affirms a lower court order that forces the state to remove barriers such as culverts that block fish migration. (AP Photo/Ted S. Warren)

The state has gotten slapped down: Again. On Monday; the United States Supreme Court affirmed lower court rulings that Washington had to accelerate its replacement of “barrier culverts” that were harming salmon runs and therefore violating tribal treaty fishing rights.

The state obviously came close —  with Justice Anthony Kennedy, the usual swing vote, sitting this one out and the other justices evenly divided, the tie vote let the lower court rulings stand.  But the outcome shouldn’t have been a great surprise. If Washington had pulled this one out, it would have been like the Chicago Cubs winning the World Series in 2016 — such things happen, but you may not want to bet on them. Federal courts have been ruling against the state on treaty fishing rights since 1974. And under the current legal framework, says University of Washington law professor Robert Anderson, an authority on Indian law, "this is probably the best case that the United States and the tribes could have come up with." If you wanted courts to find that any specific harm to salmon habitat violated the treaties, you could hardly find a better set of facts.

Seventeen years ago (in cases like this, one can't afford to be in too much of a hurry), a group of western Washington tribes and the United States government, in its role as trustee for the tribes, sued the state of Washington, asking a federal district court to order the state to accelerate its removal of "barrier culverts" — those pipes or channels that carry streams under roads (or carry roads over streams) and block or impede the passage of migrating fish. In 2007, U.S. District Judge Ricardo Martinez ruled for the feds and tribes. Six years later, he ordered the state departments of natural resources, parks and recreation, and fish and wildlife to get fish through their worst culverts within three years. And he ordered the Washington state Department of Transportation, which maintains most state culverts, to get fish through the worst of them within 17.

The state could have helped shape the injunction, Anderson says, but "the state didn't want to play." Instead, "it rolled the dice on the appeal."

The state filed its appeal with to the 9th U.S. Circuit Court of Appeals, which two years ago, upheld Martinez' decision. The Circuit Court trashed the state's math, observing that "Washington’s estimate of its cost to comply with the court’s order (‘roughly $100 million per year' more than it would otherwise spend) is dramatically overstated." And members of the court’s panel of three judges seemed appalled by the state's argument at the time that it could wipe out all the salmon without violating the treaties: "Would the State have the right, consistent with the treaty, to dam every salmon stream into Puget Sound?" one justice asked. After a little back-and-forth, the state's solicitor general, Noah Purcell, said "the treaty would not prohibit that."

"Let me make sure I understand your answer," the judge said: “You're saying, consistent with the treaties that Governor Stevens entered into with the Tribes, you could block every salmon stream in the Sound?" The ruling records that Purcell answered, "Your honor, the treaties would not prohibit that."

Some historical basics: Virtually all native peoples in this area caught and depended on salmon. When they signed the mid-1850s treaties that gave the United States title to most of what is now Washington, they kept the right of "taking fish at their usual and accustomed grounds and stations in common with the citizens of the territory." For more than a century, no one really knew what that meant.

In the middle of the last century, state officers arrested tribal members for fishing off their reservations; some Indians started "fishing in" on the rivers to assert their (undefined) treaty rights; state fish and game officers sometimes beat people up. And finally the United States, as trustee for the tribes, filed a lawsuit in order to get the fishing rights defined once and for all. In a famous 1974 decision, U.S. District Judge George Boldt decided essentially that the tribes had kept the right to take up to half the fish.

The state fought the ruling — and encouraged constituents to believe it would go away — but the courts upheld it. That settled the allocation of fish. But it left a number of questions unanswered. Over the ensuing years, federal courts answered them. Did the treaties cover hatchery fish? Yes. Did they cover shellfish? Yes. Did they imply the right to an environment in which fish could actually live? Boldt had deferred the environmental question to be decided at a later date. In 1980, U.S. District Judge William Orrick decided the answer to that one was also yes. But on appeal, the 9th Circuit Court modified that to, in effect, yes, but. The 9th Circuit said that the nature of the right depended on the "concrete facts which underlie a dispute in a particular case."

Did it extend to the so-called barrier culverts? The state appealed the 9th Circuit ruling to the Supreme Court. At the April 18 oral argument before the court, Justice Sonia Sotomayor asked right away about the state's unfortunate 9th Circuit position that the treaties didn't bar it from wiping out all the fish. That was pretty clearly a losing argument, and Purcell quickly disavowed it. No justice followed up. That was that. Still, Lewis & Clark law professor Michael Blumm says he was "a little surprised that the state seemed to concede that the treaties did include some protection of salmon habitat."

Purcell argued essentially that complying with the lower court's order would be expensive, not worth the money, and an unfair expense for the federal government to leave to the state. If the justices considered the issue of fairness, they may have had a hard time getting around District Judge Martinez' statement that "[t]he balance of hardships tips steeply toward the Tribes. . . . Equity favors requiring the State of Washington to keep the promises upon which the Tribes relied when they ceded huge tracts of land by way of the Treaties."

Nevertheless, in a press release about Monday’s decision, Attorney General Bob Ferguson’s office led off with the alleged unfairness, saying the court’s “ruling forces the state to pay 100 percent of the cost of replacing barrier culverts, even though the federal government provided the design for those culverts.” That’s one way of looking at it. Assistant to the U.S. Solicitor General Allon Kedem told the Supremes, though, that federal design approval under the Clean Water Act was “just a blanket permit granted in advance. It doesn't take account or purport to take account of local conditions.” In addition, “there's no basis for claiming that the state was required by federal law to build the culverts as they did. . . .  In fact, they have [since] changed the design of their culverts to allow for fish passage. There's no reason that they couldn't have done so from the beginning."

The district court did not impose any new standards on the state. It simply took a plan that the state wanted to drag out longer and told the state to do most of it sooner. Martinez observed that between his original ruling and the time of the injunction, the state's replacement of old barrier culverts hadn't kept pace with the creation of new ones (as a culvert deteriorates, it may become a barrier), so that the number of problem culverts had actually grown.

The state argued that the treaties must provide an exception for compelling public interest. It gave no sense of just what that would be – and there is no evidence that the treaties (signed 35 years before the state came into existence) intended it. In this case, the state seemed to find a compelling interest in its own desire to spend its transportation money on something else.

In the April arguments, Justice Neil Gorsuch said to Purcell, “You assert that you have rights to pursue other public goods . . . and so any violation of these culverts has to be weighed against the benefits they provide to other persons.” But, he continued, “I don't see anything in the treaty — maybe you can point it to me, maybe I'm just missing it textually — anything in the treaty that says: ’Ah, and your rights to those usual and customary grounds and stations is limited by, and may be completely eliminated, if necessary, to meet other domestic interests that a municipality might have.’” If that is the case, Gorsuch asked, “doesn't that potentially eliminate the treaty altogether, and doesn’t, wouldn't it defeat it entirely?”

Some implications of the court's ruling aren't clear. In oral argument, the state claimed that if the court ruled for the tribes "the treaties would regulate virtually every significant human activity off reservation, and federal courts in the Northwest would be regulating — essentially would be imposing environmental laws, would be the primary environmental regulators, rather than leaving most decisions to state and federal policymakers." Others don’t expect that to happen. The ruling "will give the tribes more leverage," UW law professor Anderson believes. But, he says, "I don't think you'll see a cascade of lawsuits."

During the oral argument, Justice Samuel Alito explicitly connected the culverts case to the controversial lower Snake River dams, which environmentalists have been saying should be removed. Did the dams violate treaty rights, too? The Solicitor General’s Kedem said no, suggesting – rather arguably – that fish ladders avoided problems, and that when the federal government had blocked salmon runs entirely, it had often compensated the tribes.

Maybe. Anderson suggests that that the ruling on culverts "helps the moral argument" against the dams but it belongs in a "totally different" legal framework. Blumm suggests that "the road to [a decision on the future of] the Snake dams is mostly through Congress."

This case isn’t the last word on treaty fishing rights. The string of fishing rights cases that dates back to Boldt may drag on forever. The federal government has been asserting tribal treaty fishing rights — and the state of Washington has been arguing unsuccessfully to limit them — for more than one-third of the state's existence. Anyone who thinks treaty rights might eventually disappear as an issue might just as well wonder when a  family’s ownership of a house will finally expire? Blumm suggests that a treaty right is like fee simple property ownership: "Neither land ownership nor treaty rights,” he says, “have time limits.”