After dramatic week, Seattle gets to meet its police chief candidates 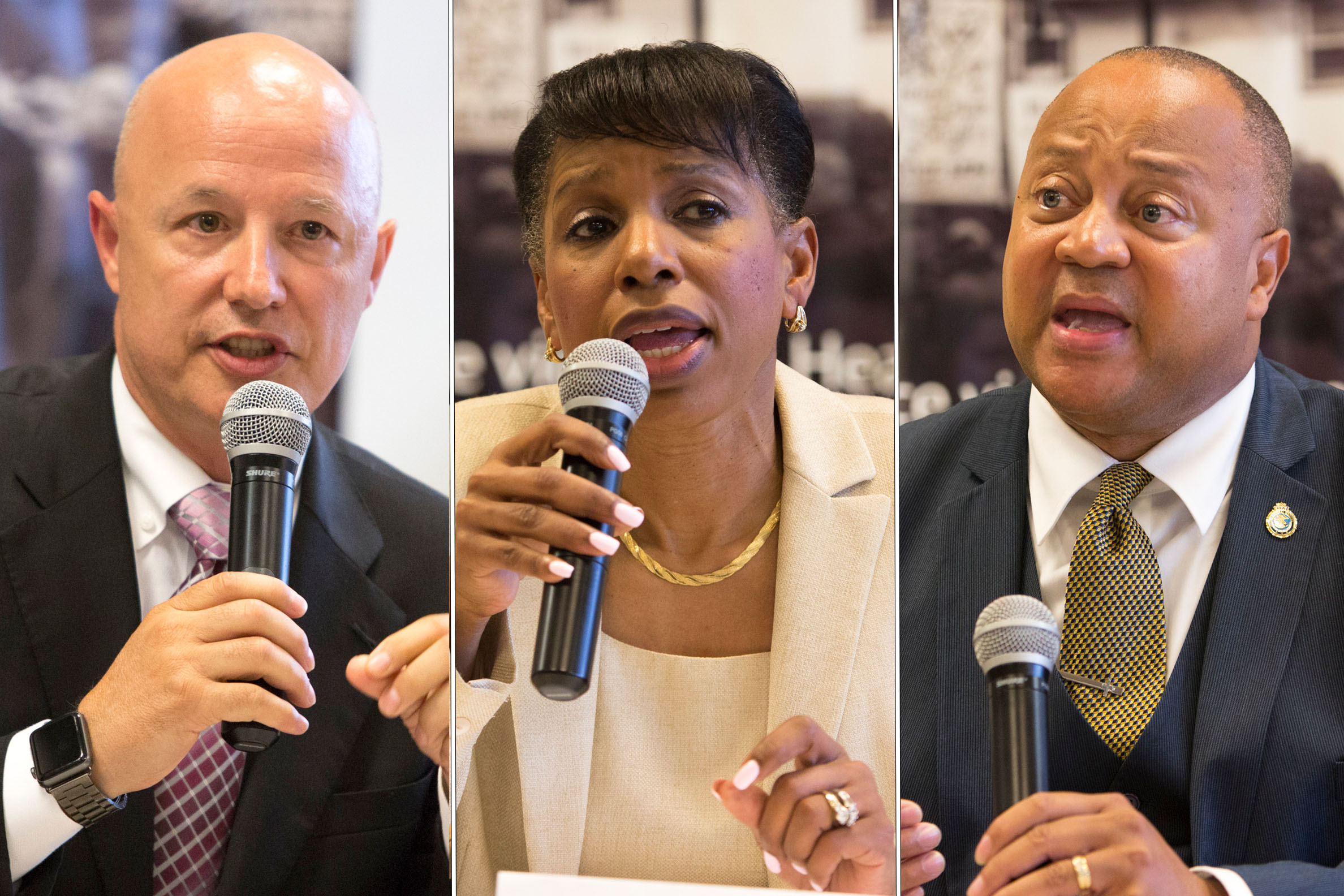 The three finalists to become Seattle’s next chief of police took turns answering questions at the Seattle Vocational Institute on Wednesday evening. Behind them was a large poster showing people protesting police violence. In front of them, a crowd hungry for major changes to the entire institution of law enforcement.

The forum offered a frank lesson for the candidates — Ely Reyes of Austin, Eddie Frizell of Minneapolis and Seattle’s Carmen Best — in the lack of trust that communities of color currently have in local law enforcement and the standards those communities expect for the city’s new top cop.

The anticipated event was hosted by Not This Time, an organization founded following the shooting death of Che Taylor at the hand of Seattle police. The group has pushed for reforms to Washington State law that would make it easier to prosecute police officers for using unwarrented deadly force.

Each candidate presented a uniquely different style. Best highlighted her connections to the community and pointed to reforms to the department’s policies on use of force which were made with her as the number two under former chief Kathleen O’Toole. Frizell spoke forcefully about his experiences as an African American man, telling the crowd that he would address issues of race head on. And Reyes promised to hit the reset button on discipline.

All three pledged zero tolerance for bias or racism in the department.

It promises to be a busy few days for the finalists. Since arriving this week, the three have already met with the deputy mayors of Seattle, City Attorney Pete Holmes, Fire Chief Harold Scoggins, the Seattle Police Officers Guild and the monitor overseeing reform, Merrick Bobb. They also met privately with members of the Chief Seattle Club and the United Black Clergy.

But Wednesday night was their first public appearance, where audience members could clap and, occasionally, jeer.

The lead up to this week has been dramatic. Best was initially not among the three finalists, a decision that infuriated both rank-and-file cops in the police department and members of the community who respect her.

But over the weekend, finalist Cameron McLay withdrew his application and Best was added to the final list.

Best is favored to get the job, according to the Seattle Times. And before the Wednesday event began, she held a clear advantage with those on hand — moving through the room, she joked with attendees, shaking hands, addressing them by name. When she was introduced, the crowd cheered.

“I know most of the people in this room by name,” she told the crowd. “If I’m not the person to help you, I want to know who is.”

But with that familiarity also comes disadvantages. Unlike the other candidates, Best must answer for the department, including the death of Charleena Lyles, the African American mother shot and killed by police last summer. Lyles’ cousin, Katrina Johnson, spoke forcefully toward Best Wednesday, saying her family was promised answers that they never received. “If you can’t get back to us as family … how do I know what you’re going to do as police chief?” she said.

“What happened in our systems that led to the very tragic moment that led to the death of a mother and her unborn child — it hurts me to my heart,” answered Best, promising she would be communicative and open to the public.

Best also expressed support for investing more in community alternatives to the standard criminal justice system. She pledged that on her watch, she would do everything she could to avoid more shootings. “There’s nothing more important than the sanctity of life,” she said. “Officers are not paid to kill people; they’re supposed to be saving people.”

Frizell came with the most energy, a quality noted by Pastor Reggie Witherspoon. “If passion could get the job done, you’d be a no-brainer,” he said.

From his opening remarks, Frizell spoke of his race and his experiences as a black man. He recounted how he would tell his family members to roll down the windows and put up their hands when they were pulled over. “I have 55 years as a subject-matter expert as a black man,” he said.

Perhaps more than the other two candidates, Frizell sought to appeal directly to the concerns of the people in the room. He promised that he would not only dismiss problem cops, but also the “good” ones who didn’t speak up. “I know there’s no such thing as that thin blue line,” he said. “You’re just as bad if you sit there and watch somebody commit a crime against the community.”

But at times, his status as an outsider showed. Although he said he was familiar with Seattle’s Law Enforcement Assisted Diversion program, which offers alternatives to low-level offenders before being arrested, he misspoke on the specifics. And to the disappointment of the hometown crowd, he kept his comments broad rather than specific to Seattle.

Reyes leaned on the experience he gained while studying under Austin’s former police chief Art Acevedo, who has made headlines for pushing back on the National Rifle Association.

Reyes’ demeanor was that of a cop from central casting, he displayed no flourishes and only showed emotion when speaking of his son who died of cancer.

But he also said he did not believe homelessness should be criminalized, spoke of avoiding using deadly force and said the Austin Police Department was not afraid of disciplining officers. “The good news about bringing in a new chief of police to Seattle is you get to hit the reset button on discipline,” he said.

As the only non-African American finalist before a diverse crowd, answering the questions of Black clergy and Black leaders, Reyes faced a particular challenge when addressing the concerns of Black communities. His answers did not hold up as well as the other two. While the other two focused on direct experience, he spoke more about his connections to communities of color in Austin.

While each candidate held their ground, there was something of a disconnect: For some, the problem with policing has not been the chief, but the system itself. “I’m looking for a police chief that will admit that the institution of policing is inherently flawed,” said Nikkita Oliver, community organizer and former candidate for mayor.