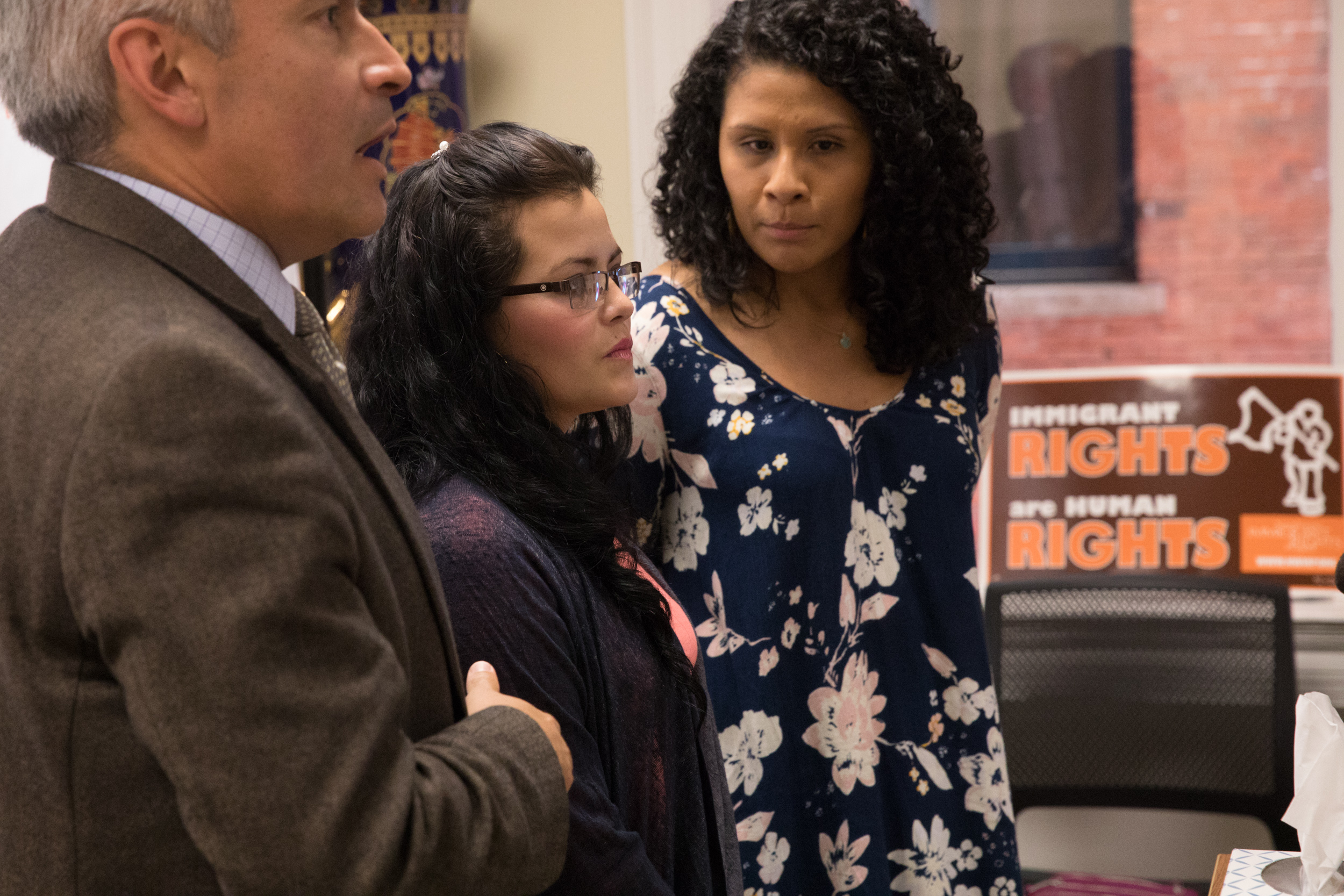 It’s been almost two months since Yolany Padilla has seen her son. A mother from Honduras seeking asylum in the United States, she was among 55 parents separated from their children at the border who were being held at the Federal Detention Center in SeaTac and the Northwest Detention Center in Tacoma. Last week, she became the first to be released. Her child, though, remains thousands of miles away.

At an emotional press conference in downtown Seattle on Wednesday, she spoke about her harrowing journey to the U.S. and, despite last month’s court-ordered deadline to reunite immigrant parents with their children, the obstacles she continues to face in her effort to see her six-year-old son.

Attorneys with the Northwest Immigrant Rights Project (NWIRP) who joined Padilla at the podium explained that the government was insisting parents provide certain types of documentation — fingerprints, birth certificates, proof of income — before reuniting families.

“The damage that has already been caused is perpetuated,” said Padilla’s attorney, Leta Sanchez, a volunteer with NWIRP. “Today, we are calling for their immediate reunification.”

“It is unacceptable and heartbreaking that he is being continued to be withheld from her.”

Speaking in Spanish, Padilla, for her part, said, “Why do they keep us separated if we’re their mothers? We shouldn’t have to wait so long to be able to talk to our children. It’s abuse. No one should have to ask for permission to talk to their children.”

Padilla is one of three women who sued the Trump administration last month for separating parents from their children. The Northwest Immigrant Rights Project filed the lawsuit in U.S. District Court against U.S. Immigration and Customs Enforcement, U.S. Department of Homeland Security, U.S. Customs and Border Protection and Office of Refugee Resettlement, among others.

It named two other asylum seekers: Ibis Guzman and Blanca Orantes. NWIRP pointed out, however, that it was suing on behalf of all parents in Washington state who were separated from their children and who find themselves in the same predicament as the mothers named in the suit.

Like so many others, Padilla, 24, crossed the Texas border with a plan: Turn herself into U.S. Customs and Border Protection and do what the law stipulates all have the right to do — apply for asylum.

After arriving at the border, Padilla said, she and a couple of dozen other immigrants, including fathers, mothers and children, walked for about 45 minutes before border patrol approached them. At first, the officer was kind, she explained. He offered the group water and invited them into his air-conditioned car.

“Logically no one accepted his offers,” Padilla said nervously in Spanish.

Although they initially refused to climb into the vehicle, eventually the group piled into two cars, while some fathers led the way on foot. When they arrived at a bridge, the officer broke the news: parents would be separated from their children. The children cried when they learned they would no longer be able to see their mother or father, she said.

Padilla and others were stripped of any belongings. For three days they were held in what is commonly referred to as the “hielera,” or the icebox, so named because of the frigid conditions.

Then there was the verbal abuse. An officer told her that only by bombing her country and killing everyone would the flow of immigration stop. Other officers told her and her fellow travelers that they didn’t care what they wanted to know, they should have thought about the consequences before they crossed the border. The officers wouldn’t give them the time or answer even the most basic questions.

The detainees were also forced to drink water from the toilet tank, Padilla said. Some had not showered or brushed their teeth for weeks.

In response, a border patrol spokesperson said Padilla's descriptions "do not fall within what we know to be common practice at our facility." The CBP spokesperson said minors and families have immediate access to water and snacks, as well as showers every other day.

That was the last time she saw her son, Padilla said, explaining that being held in the “hielera” had been one of the worst experiences of her life. She said at the time she had no idea where immigration officials had taken him.

Padilla was then transported to a detention center in Laredo, Texas, but the new location proved to be just as horrible.

“Just because we’re immigrants doesn’t mean we should be treated like animals. We are all human beings made by the same hand,” Padilla said.

After about two weeks, Padilla and other detainees were chained as they were transported to the Federal Detention Center in SeaTac. Suddenly, the conditions were more humane, she said. After spending three days at the Northwest Detention Center in Tacoma she was released after paying a $8,000 bond. Yet she still has to fight to see her son.

Padilla managed to talk to her son a handful of times while in detention. Now she calls every day. Her son, Jelsin, spends his days at the Cayuga Center in New York. Evenings and weekends are spent at a foster home, Sanchez said.

“He is desperate. The call ended in tears,” Padilla said, speaking about her most recent conversation with her son. “I almost couldn’t talk, but I had to make the effort so that he wouldn’t hear the heartbreak in my voice. … He doesn’t want to be where he is right now anymore.”

“I won’t be happy until I have him with me again,” she said. “He could have everything in the world, a million dollars, but he doesn’t have the most important thing — his mother.”

“I hope with all my heart that the mothers who are still detained will be released soon because their children need them.”

Across the country, approximately 3,000 immigrant children have been separated from their parents under President Donald Trump’s new “zero-tolerance” policy, which seeks to criminally prosecute anyone who crosses the border without documentation. On June 20, after considerable public outcry, Trump issued an Executive Order meant to end the practice of family separation.

Critics of the executive order, however, fear the Trump administration may end family separation only to turn around and indefinitely detain parents and children. Although immigration officials cannot legally hold children for longer than 20 days, Trump’s order set in motion a request to get a court to approve detaining families for longer than that. On Monday, Judge Dolly M. Gee of Federal District Court in Los Angeles denied that request.

Last month, Judge Dana Sabraw of Federal District Court in San Diego ordered the government to reunite 103 children under age 5 with their parents by July 10. On Thursday, officials announced it had reunited all "eligible" children under 5 with their families, according to The New York Times.

Government officials also need to meet a July 26 deadline to reunite all remaining migrant children separated from their parents.

On Tuesday, Sabraw also ruled that while a lengthy and intricate vetting process made sense in circumstances where, say, a minor arrived in the United States without a parent, the “detailed vetting process was not meant to apply to the situation presented in this case, which involves parents and children who were apprehended together and then separated by government officials.”

With regard to Padilla's immigration proceedings, even if and when she gets her day in court, there’s no guarantee an immigration judge will grant her, or others like her, asylum. In 2017, according to the Transactional Records Access Clearinghouse, or TRAC, at Syracuse University, 30,179 asylum cases were decided by judges — the largest number of cases since 2005. More than half, however — 61.8 percent of applicants — were denied asylum status, with those from Honduras, Guatemala and El Salvador facing a particularly high likelihood of being denied.

Still, Padilla said she has no plans to return to her home country.