Blue wave? This is the worst time to be a Democrat 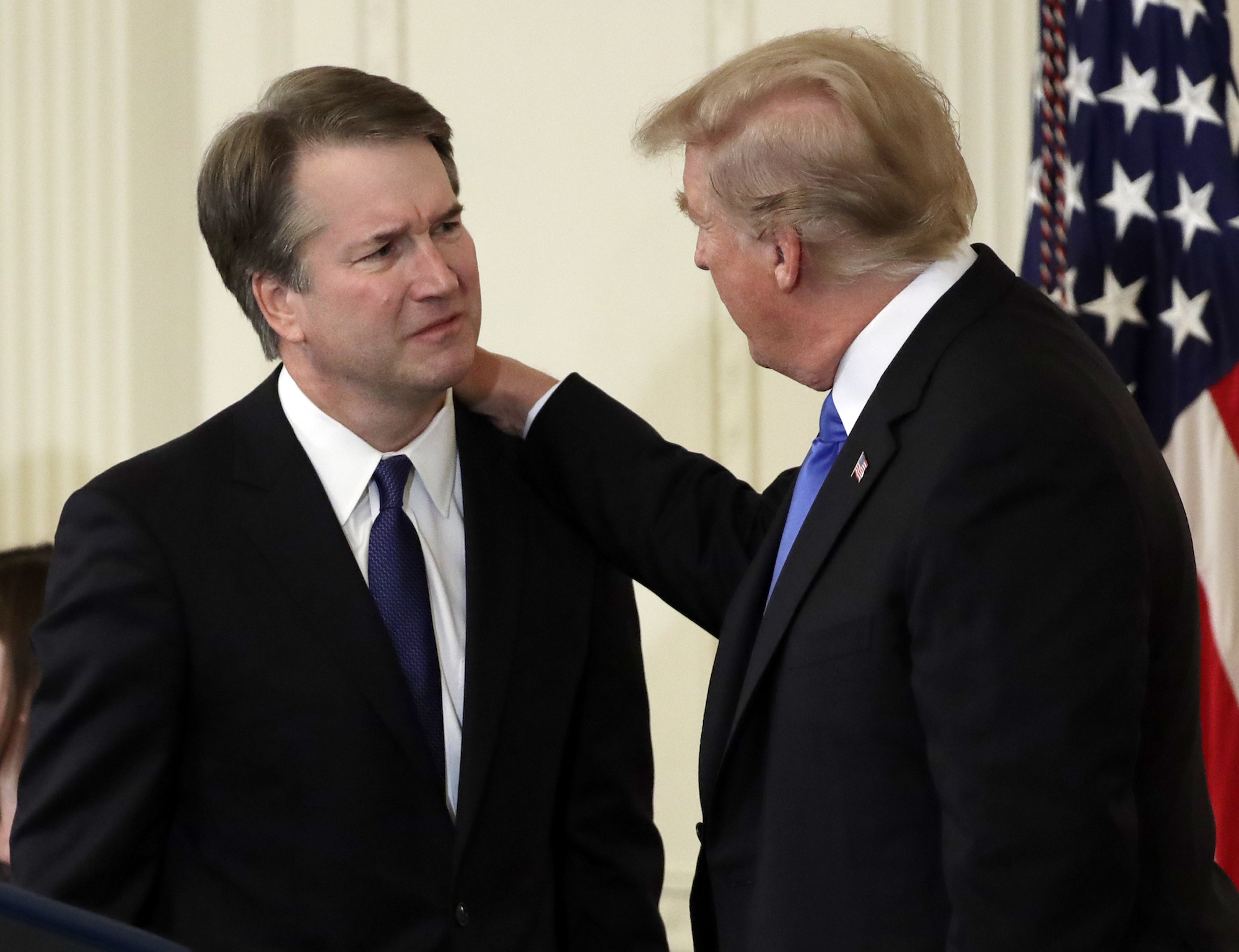 If you spot check the news, things seem to be going fine for Democrats: Spirited demonstrations are rallying thousands of impassioned progressives across America, augmenting the ongoing protests outside detention centers for undocumented immigrants. The recent one at SeaTac’s Detention Center drew 10,000, many times more than expected.

And the outcry against the practice of temporarily separating children from their parents who crossed illegally into the country marked a rare instance where President Donald Trump retreated from a policy (in fairness, one he expanded but did not create) rather than dig in and fight. Plus: Scott Pruitt’s exit at EPA. The blue wave is moving.

Except it’s not. This may be the worst time for Democrats since Donald Trump's election.

In late June came U.S. Supreme Court decisions striking down mandatory dues (or even fees) for teachers and other public employees and ratifying the latest iteration of Trump’s temporary travel ban. (Washington state Attorney General Bob Ferguson was June’s biggest loser, going 0 for 4; his other two losses being the culverts case against the tribes and the state Supreme Court decision against the Tri-cities florist being returned to the state court for further review.)

Amid all the noise, chants and sign waving, the blue wave is shrinking. It doesn't seem that way in the Seattle area (or other liberal metro areas like San Francisco, Washington D.C., or New York) because blue areas are becoming bluer still.

Eight months ago, after the off-year elections in Virginia, a blue wave seemed inevitable. Four months ago, even with the improving economy (which usually helps the incumbent president and his party), it still seemed a strong possibility. Sixty days ago, on the eve of the historic summit with North Korea, a smaller wave in the Democrats’ direction was still plausible. But recent developments have made it likely that Democrats will lose U.S. Senate seats this fall and make it tougher for them to capture the House.

There are two big reasons to start with:

1) Justice Anthony Kennedy’s retirement. Nothing brings activists left and right out of their chairs quicker than a Supreme Court vacancy. Progressives and partisans in the Democratic Party are in full battle cry demanding no cooperation at any step of the confirmation process for Donald Trump’s nominee. It will almost certainly backfire on Democrats come November.

U.S. Sen. Patty Murray, Washington’s senior senator, got out quickly with critical comments about nominee Brett Kavanaugh (as she would have been with any of Trump's other choices). This is driven partly by payback for the Republican blocking of Merrick Garland, the Obama nominee, and partly by panic about the direction of the court. The current 4-4 split with Justice Kennedy swinging back and forth would likely become a reliable 5-4 conservative majority. Any Democrat who dares support Brett Kavanaugh, regardless of the judge’s stature and impeccable qualifications, incites immediate, angry rebellion from the party’s growing left wing and division within their campaign.

Washington's junior senator, Maria Cantwell, went on Meet the Press to push her fellow Democrats to close ranks against the president's choice. But ten Democratic senators represent states that Trump won, some of them by comfortable double digits. Being seen as an ally to the resistance will not re-elect Joe Manchin in West Virginia or Heidi Heitkamp in North Dakota. Nor will it play well in states like Indiana, Arizona, Florida, Montana or Missouri. The Democratic incumbents there must either antagonize already angry liberals in their base by supporting Kavanaugh, or vote against him. And joining the efforts to block Kavanaugh plays into Republican accusations that when push comes to shove, they cave to the Never Trump movement.

2) The resistance is pulling the Democratic Party to the fringes. Twenty-year veteran U.S. Rep. Joe Crowley from Queens in New York City, the number four Democrat in House leadership, had not faced a primary challenge in 14 years and was eyed as a potential House Speaker. He had millions in the bank and a little-known opponent, a 28-year old self-described socialist who organized for Bernie Sanders and was recently working as a bartender. But Alexandria Ocasio-Cortez offered a fresh contrast to Crowley, running hard to his left. Despite being outspent about 5-to-1, she bested him by 15 percentage points.

This has emboldened the Democrats’ left wing, which is where you find the energy, the passion, organization and determination to turn D.C. upside down.

But outside reliably liberal districts (like Crowley’s) it’s not where you find voters. As with the Kavanaugh appointment, it puts Democratic candidates in a predicament. Run left, where the gravity in your party is pulling you, or toward the middle, where the voters live.

That’s an easy question to answer in Seattle’s 7th Congressional District or the 9th District, where Democratic incumbent Adam Smith need only care about primary opposition. But if you want to flip Congress, you need to flip the 8th District (Issaquah, Ellensburg, Wenatchee and other areas). Not many folks there are demanding a policy agenda that could have been crafted in Fremont.

Exhibit A in how the resistance is hurting Democrats in places like the 8th: illegal immigration. A couple weeks ago, Donald Trump laid out his strategy in one line: “We believe in strong borders and no crime. The Democrats believe in open borders and they don’t care about crime.” The Democratic response from House members like Seattle Congresswoman Pramila Jayapal, and Sens. Kirsten Gillibrand and Elizabeth Warren: “Abolish ICE!!” What a gift. To Republicans.

But never mind about not reaching undecided moderates in places like the 8th District. The Dems’ flirtation with ideological extremism and full-on embrace of identity politics is fraying their own coalition. White millennials (between 18 and 39), one of the most important elements of Barack Obama’s successful coalition in 2008 and 2012, are starting to drift away. The Reuters/Ipsos survey of 16,000 white millennials showed that while 2-in-3 don’t approve of Donald Trump, they are also losing interest in the Democrats. Two years ago, the springtime survey showed that 47 percent of white millennials preferred a Democrat for Congress while just 33 percent wanted a Republican. Two years later the same survey has the parties deadlocked 39-39 percent.

How on earth did that happen?

Mostly from departures among the white millennial men, who have shifted dramatically — 36 percent then to 46 percent now — to the GOP. The trend even has a name: #WalkAway, begun by hairstylist Brandon Straka in New York whose viral YouTube video announces that his revulsion to intolerance, hate and narrow-mindedness that made him a liberal is now driving him away from the left. Latest local example? Lt. Gov. Cyrus Habib, the man who is responsible for maintaining decorum in the state Senate, inexplicably sent out this tweet earlier this week: "That the party of Trump would run any part of our state government is absurd. Yet, thanks to misguided redistricting priorities, Democrats only hold narrow majorities in the Legislature. If you're outraged by the white nationalism sweeping the GOP, help us win." Where are all these white nationalists running for the Legislature? Every Republican candidate for the Legislature and Congress should ask his or her Democratic opponent if they agree with that statement.

Can the pendulum swing back toward the Democrats? Sure. The economy can collapse, there could be sudden movement in the Mueller investigation, Brett Kavanaugh might melt down in his confirmation hearings. But all these possibilities range from unlikely to fantastical, and they depend on factors outside the control of the Democrats themselves.

Four months out, momentum is shifting, slowly but steadily, from left to right. If it continues, the Blue Wave may not even be a trickle come November.