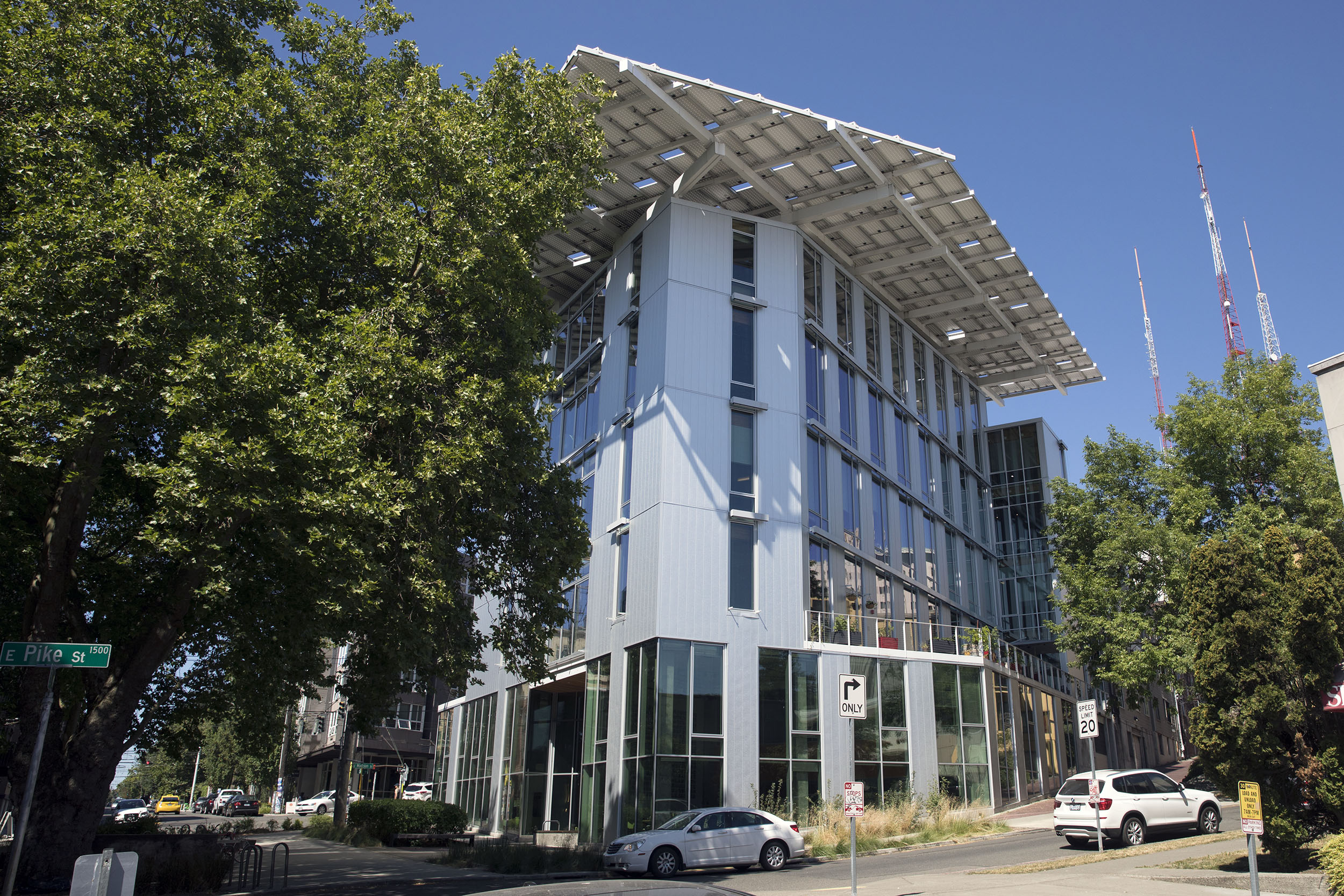 The Bullitt Center in the Capitol Hill neighborhood of Seattle. (Photo by Matt M. McKnight/Crosscut)

Half a decade ago, Seattle’s Bullitt Center heralded the future in environmental engineering. The six-story commercial building in Capitol Hill features composting, low-flush toilets, an onsite wetland to purify greywater, and an internal circulatory system of warm-water-filled tubes for efficient heating. Its 575 rooftop solar panels produce more energy than the building uses, and tenants use 95 percent less water than this city’s average office building.

But Bullitt Foundation President Denis Hayes, widely known as the organizer of the first Earth Day in 1970, says the project has fallen short in one crucial way: So far, engineers around the world have failed to take the center’s design principles to bigger and better heights.

“Some of you will recall (I appreciate your not reminding me of it!) that when we commissioned the Bullitt Center, I said that if it was still the world’s largest Living Building after five years, I would consider our effort a failure,” Hayes wrote last month to his board members. “It is five years later, and the Center remains the world’s largest living building.”

At the time of the Bullitt Center’s conception, a “living building” was little more than a wild dream. So Hayes and a dedicated team set out to shift the market’s conception of what was possible.

“Our theory was that a key reason no one was building large living buildings was that developers considered them not just challenging, but impossible,” Hayes said via email. “If we could build one that met all its tests and was completed on time and within budget, that argument would disappear. Anything that exists must be ‘possible.’”

By all accounts, the Bullitt Center succeeded on that front. But in most cities, significant barriers to replicating its success remain.

“Living buildings are harder to finance, despite our excellent financial performance at Bullitt,” he said. “They face greater regulatory challenges, especially from local officials. They require creative architects, engineers, and contractors who will work together as a team — not ‘starchitects.’ And they require developers who are willing to take calculated risks.”

“For all these things to come together also probably requires tenants who demand excellence — not just some additional insulation and some LEDs,” Hayes said.

Although smaller environmental buildings are popping up across the U.S., “deep green” construction is not progressing as quickly as Hayes had hoped it would — especially not in Seattle. He partially blames the “Amazon effect.”

“Amazon has grown so extremely fast, and is so intently focused on its financial bottom line, that developers have not been rewarded for doing anything different,” he said. “As its future growth is shared with another city, Seattle commercial real estate may become a true market again, where developers need to do something exceptional to beat the competition and fill their buildings.”

Now local policymakers are stepping up to try to address those challenges, remove barriers and stimulate green construction.

Earlier this month, Mayor Jenny Durkan approved legislation to upgrade the Living Building Challenge Pilot Program, a 2010 initiative that offers building incentives to developers who meet certain stringent environmental requirements. The initial program laid the groundwork for the Bullitt Center, but only two other projects have since signed on (a residential building in Fremont and an office building in South Lake Union). Neither of them has been completed, said Mike Podowski, Code Development Manager for the Seattle Department of Construction and Inspections.

The updated legislation boosts incentives for buildings that achieve full certification through the international Living Building Challenge (which includes using rain for water needs and independently generating all electricity) or obtain Petal Certification (which includes reducing total energy use by at least 25 percent and relying on primarily non-potable water). They also need to meet an additional set of environmental requirements set by the city.

While the old program offered developers a permitted increase of 15 percent in additional floor space for buildings that meet these requirements, Podowski explains that the new legislation doubles that. It also allows developers to add roughly two additional floors to their building.

Durkan also approved the establishment of the 2030 Challenge Pilot, which offers the same incentives to existing buildings. Hayes said that this is an important addition, given that so few of the city’s buildings are actually replaced each year. “The other 97 percent can be, and must be, very substantially upgraded,” he said.

Although the changes only went into effect three weeks ago, Podowski is already fielding phone calls from developers interested in the program.

“I’m hopeful that we’ll get some participants,” he said. “I also hope that they will come to realize that there are some operational cost savings that are also a part of doing these green buildings. And so they can just make practical sense as well as from an environmental policy sense too.”

The Bullitt Center, for example, earns about $50,000 a year selling surplus energy back to Seattle City Light. The center also stays ahead of the curve with occasional upgrades. Its engineers have been continually fine-tuning the composting system, including by switching out toilets as new technologies become available. They have also switched out its greywater (soiled water from sinks and showers) storage tank in order to decrease bacteria buildup.

In the future, they plan to add a battery system to compensate for nighttime power grid outages. And engineers are testing a rainwater-to-potable-water system that, once fully approved, will fulfill all of the building’s water needs.

Although the Bullitt Center remains the largest living building in the world, Living Building Challenge Vice President Kathleen Smith said it’s clear it has had a significant influence on many other green projects. For example, the Brock Environmental Center in Virginia Beach gets all of its water from rainwater catchment — an environmental breakthrough made possible through the center’s prior work, she said.

“I think for a lot of developers that are just getting into thinking about doing living buildings, it’s hugely significant to have the Bullitt Center as a Class A office building in a major international city to point to and say, ‘they did this,’” she said.

With residential and commercial buildings generating nearly 30 percent of all U.S. carbon emissions, Hayes notes that the sooner buildings like the Bullitt Center can become standards rather than standouts, the better.

“The problem is that climate change demands hundreds of millions of buildings that operate on these same principles in order to avoid catastrophe,” he said. “The yawning gulf between what we’ve got and what we need is truly daunting."

Still, Hayes sees much potential for momentum in the green-inclined tech sector and with international demand. Australia just greenlit a 42,000 square-foot sustainable shopping center in Melbourne powered by renewable energy and equipped with an urban rooftop farm that, if completed, will finally eclipse the Bullitt Center.

“Most of the large [living buildings] on the planning table now are single tenant buildings for tech companies whose employees are green and want a healthy, earth-friendly building,” Hayes said. “An exception is a huge, multi-tenant development underway in Australia. It’s happening, but I should have given myself six years instead of five!”