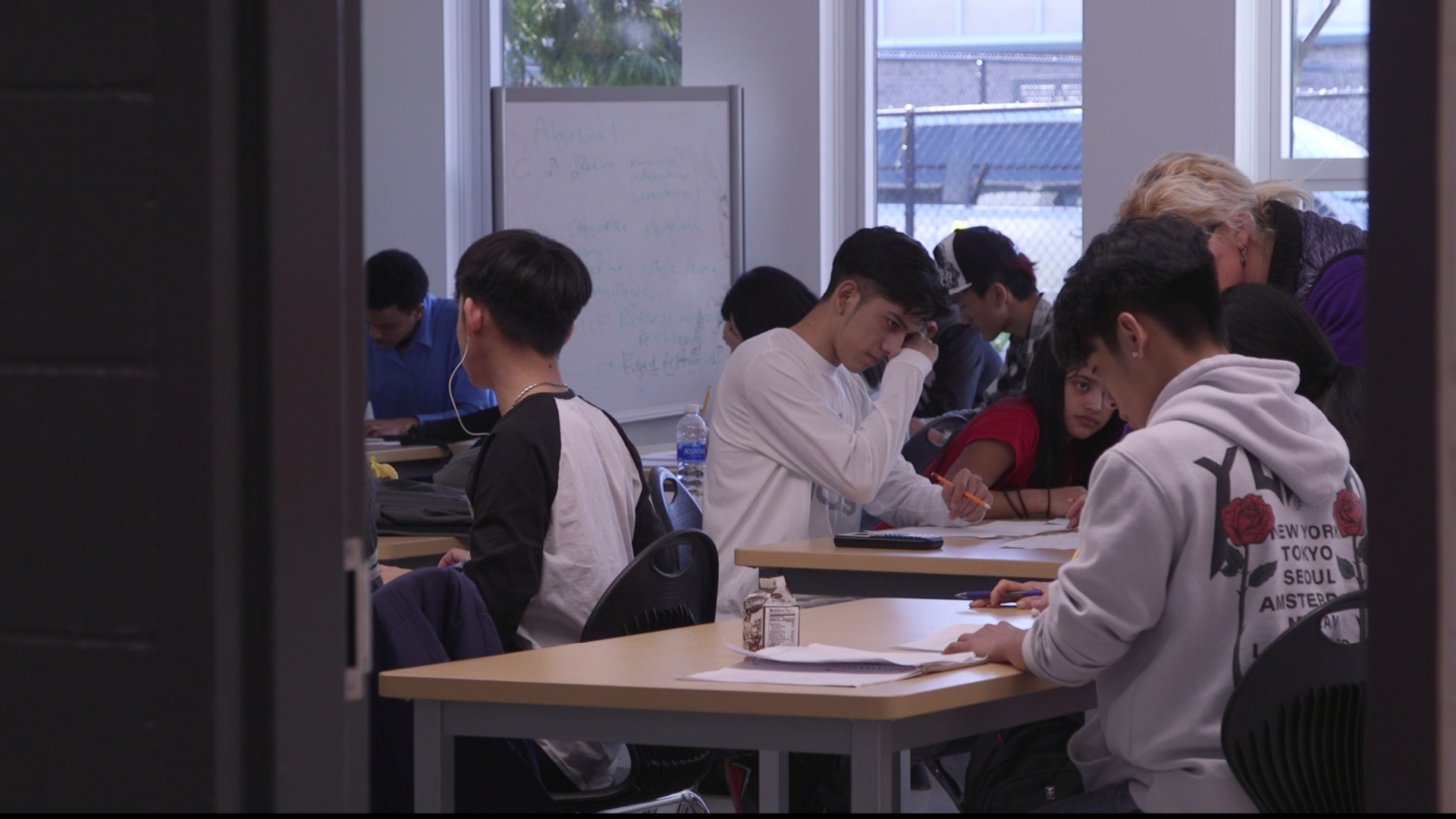 Students at Seattle World School. (File image from a video by Valerie Vozza for KCTS 9)

Last May, students at Seattle World School headed to the Washington Park Arboretum for prom. But when they arrived, they found a form waiting for them to sign. The form stipulated students would not be allowed to enter the event after 9 p.m. So later, when a few students straggled in past the hour, Principal Oksana Britsova tried to turn them away.

According to two people — a student who was there and who asked to remain anonymous and school staffer Teresita Bazán, a Spanish-speaking facilitator — a confrontation between the principal and the students quickly escalated. While students complained school officials had failed to warn them ahead of time that they would not be allowed in after a certain hour, Britsova, with a microphone in hand, threatened to call the police.

Students panicked. Because Seattle World School caters to immigrants and refugees, many students speak limited English. At prom that night, some students thought the principal had just called immigration.

“For many students, [prom] was just kind of ruined,” said James Hong, executive director of the Vietnamese Friendship Association. He works closely with the school. On May 25, Hong filed a civil rights complaint on behalf of the students because of the May 12 prom incident.

Britsova resigned from the school less than a month later, saying her departure was in the best interest of the students and the school. However, there remain questions surrounding the decision by Seattle Public Schools to assign Britsova to Seattle World School in the first place.

Teachers, parents and other administrators now also question why it took so long to oust the principal. They’re wondering why they haven’t had a greater say in hiring. And they’re wondering whether the district has lost sight of the school’s unique purpose.

“Seattle Public Schools has a way of taking care of fires, and it’s not until there's a big explosion that they get handled,” said Sebrena Burr, immediate past president of the Seattle Council of the Parent Teacher and Student Association (PTSA).

Seattle World School, originally established in 1980 as the Secondary Bilingual Orientation Center, was created in part because the city’s public schools’ bilingual education program was found to be severely lacking. School board members almost reneged on their promise of a new home for the school in 2013, despite its inclusion in a $398 million school district levy fund. In 2016, Seattle World School finally opened the doors to its current location on Capitol Hill. It serves approximately 300 students, grades 6 through 12.

Britsova started working at the school in 2016. According to the latest salary data obtained by The Olympian, Britsova made $131,685.

But her leadership has long been problematic, according to numerous staff members who have served directly under her, as well as those familiar with her work. “This principal had been an issue for the district for a while,” said Burr, the PTSA immediate past president.

In a 2013 letter written to Britsova and the district superintendent at the time, Jose Banda, staff at the principal’s previous school — The Center School — detailed their concerns. They pointed out that surveys had shown “abysmal scores” for her leadership for the previous two years: 51 and 49 percent in contrast to the overall district’s scores of 75 and 66 percent.

“She has failed to demonstrate a clear ability to create a sound budget. Often she has appeared confused, unclear, or unprepared at meetings,” the letter went on to read. “Five staff members left ... in part because of her leadership, and eight members lodged complaints.”

The letter, signed by 19 out of 22 Center School faculty members, also claimed Britsova “berated and yelled at faculty members in meetings in an unprofessional manner. As a result, many lost trust in her.”

And perhaps most relevant to her future position at Seattle World School, the letter stated that she had not “demonstrated cultural competence. Many students of color report that she treats them differently from white students.” The document also asserts Britsova suggested to “students of color that the best way for them to deal with school issues is to assimilate into White culture, a suggestion that the students found objectionable.”

Jon Greenberg, a Center School teacher for nearly 20 years, couldn’t understand the district’s decision to reassign Britsova to another school. “I don’t get it because the documentation of misconduct is so great,” Greenberg said in an interview recently. Greenberg called the approximately six years Britsova served at The Center School "by far the most tumultuous.”

Following an episode in which a student brought a Molotov cocktail to class after threatening to shoot two classmates a week earlier, Britsova was placed on administrative leave because of a possible mishandling of the incident. The principal was eventually cleared of wrongdoing although students had apparently told her about the student’s threat. According to a Seattle Times article, it’s not clear whether or not Britsova ever reported the threat to police.

When the school district transferred Britsova to Seattle World School in 2016, some believed the decision didn't “seem like it was made with students’ best interests in mind,” according to a current World School employee who asked to remain anonymous out of fear of losing her job. “Basically we feel like we were used to solve a problem the district had.”

It wasn’t long, however, before morale at the World School also tanked, according to results from a 2018 survey. In May, the civil rights complaint filed by the Vietnamese Friendship Association read in part: “We believe that Principal Britsova has taken advantage of the students’ vulnerability and targeted them based on their race, religion, national origin, or immigration status. At a minimum, Principal Britsova lacks the cultural competency to interact with this vulnerable student population.”

“At least one student believes their immigration status is threatened as a result of a recent interaction with Principal Britsova at prom, during which she mentioned the words ‘immigration’ and ‘police,’” the complaint went on to read. The complaint also noted that Britsova was “yelling and waving her hands at students to the point where students were not sure if the principal was going to hit them or not” and that one student felt “as if they were criminals.”

“This is bigger than academics. This is about students and how they feel about themselves,” Burr said.

District officials have refused to answer questions pertaining to Britsova's tenure, noting that they typically do "not share confidential information related to personnel matters."

The Office of Public Affairs for the district went on to say that "an interim principal will be placed at the school for the 2018-19 school year as requested by staff and community."

"At that time, the Executive Director of Schools will work with school staff to form a hiring team that would screen applications, conduct interviews and recommend their top candidates to the Superintendent."

Britsova, for her part, in an email to staff about her resignation on June 5 said: “While this has been a difficult decision, I believe it is in the best interest of the school community and our students.” Crosscut was unable to reach Britsova for any further comment.

Sherri Kokx, a former middle school administrator, is currently acting as interim principal at the school.

Faculty members have mixed feelings about what will come next. Some are optimistic — ready to move on with the promise that their voices will be included in the selection of the next principal.

Others, however, are cautious.

“This is a good first start,” said the current World School employee. “I just hope the district doesn’t feel like they’re done.”

But Bazán, the Spanish-speaking facilitator, says the district’s actions have arrived too late. The climate at Seattle World School has grown so dire it began affecting her health, she explained. After five years in her current position at the school, she has opted not to return next year.

Hong said he looks forward to Seattle World School returning to peak performance: “When everything is running at 100 percent, it’s the best gift the city has.”

Last month, the Vietnamese Friendship Association, the Christian nonprofit Urban Impact and others helped students organize a beach-themed prom “redo,” complete with beach balls and a giant, pink flamingo. About 60 students attended the makeup prom at 415 Westlake, an event space in downtown Seattle.

This article was updated to clarify that Sebrena Burr is the immediate past president of the Seattle Council of the Parent Teacher and Student Association (PTSA).

Send us your tips and story ideas!

We wrote this story after receiving a tip from a reader who filled out our story form. If you think you have a credible tip or a great story idea, Crosscut's newsroom wants to hear it.