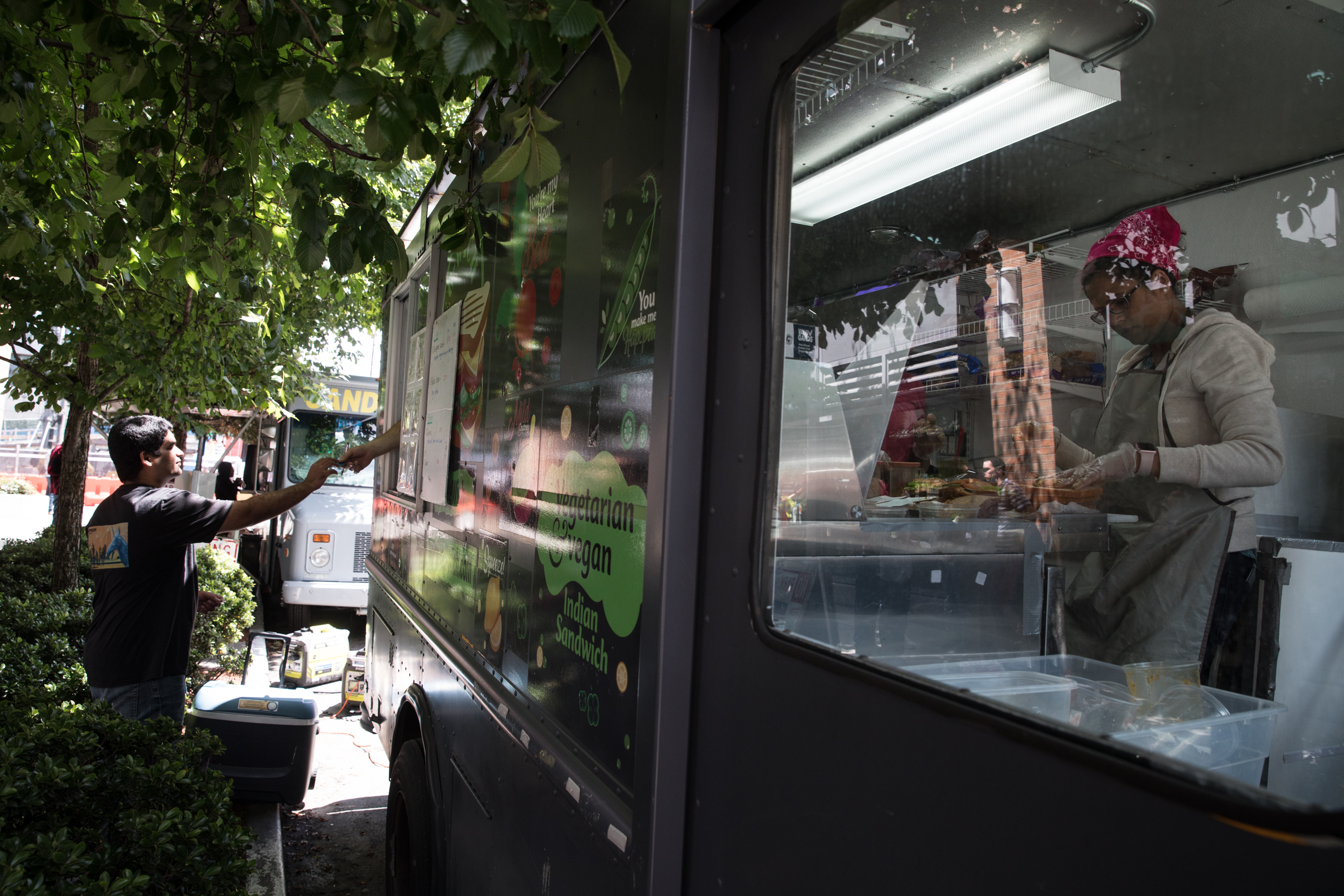 After more than a decade with Microsoft, Shama Joshi had had enough . . . bad Indian food.

Joshi, a computer scientist by training, dropped out of the tech industry in 2016 to open her own food truck, Roll OK Please. The change of careers met her desire to own her own business, and fill what she sees as the dearth of good Indian food in Seattle.

“I come from a country where we love food and talk most of the time about food,” said Joshi, before comparing Seattle’s standard Indian fare with nuclear waste.

Indian food’s aroma — cinnamon, cardamom, clove and cumin, sweet and savory scents blending — draws food lovers to trucks like Joshi’s during any lunch rush. Workers pour out of offices in downtown Seattle and South Lake Union to chat in small groups or stare at their phones as they await kathi rolls, curries and tastes of Mumbai.

And the trucks have become more than just food options for tech workers. They're now a business of choice for female entrepreneurs.

Among them are a handful of Indian women who have left well-paying jobs in tech to pursue dreams of owning small businesses. For Joshi and other Indian immigrant women, ditching tech for a truck isn’t as large a shift as it might seem — they take lessons from the tech industry into their own businesses.

Former Expedia worker Gayatree Shah’s black truck is adorned with images of potatoes, cucumbers, cheese and tomatoes. Signs detail the ingredients involved in the truck’s chutneys and sandwiches, made with an Indian twist. The food truck, often located in Amazon-inundated South Lake Union, has a long queue of people waiting for vegetarian, Indian-style sandwiches.

Shah, 34, loved to make sandwiches for her family as a teen. She never dreamed her passion would win her accolades. After working eight years in a couple of tech jobs, she quit and started her own food truck, VegWich.

“I enjoyed my work in Expedia, and it was challenging, but eventually I got bored,” Shah explained. “I wanted to do something challenging and use my creative energy. ... I dabbled myself in art and different things and started being creative with my recipe, and that’s how VegWich was born.”

Shah grew up in Mumbai and did her studies in India, where she earned a business degree and had dreams of one day owning her own business.

“During my childhood, on weekends, I used to prepare sandwiches for my parents, and they used to comment that if I don’t do well in my studies, then they would open me a sandwich food stall … and, see, here I am today with my food truck,” Shah said.

Shah, a Seattle resident, started her business in July 2016 to positive response. She recalls the first day of operating VegWich involved a 12-hour day prepping the food.

For Shah, working at a food truck was not as pleasant as she thought it would be.

“There were a lot of the days I cried because of the effort to put into the business,” said Shah, adding that the problem-solving and multi-tasking skills she learned in her technology job helped.

Though Shah isn’t making as much money as she did before, she said she sees a future in it, and the potential for financial success. She broke even the past two years, and she will start making a profit this year.

Comparing her life in tech and at her food truck, Shah said: “Work life as a data analyst was peaceful. I could go home and detach from work. … As a food truck owner, it has taken a lot of learning discipline to detach from work. I have had to learn to park issues and be in the present.” 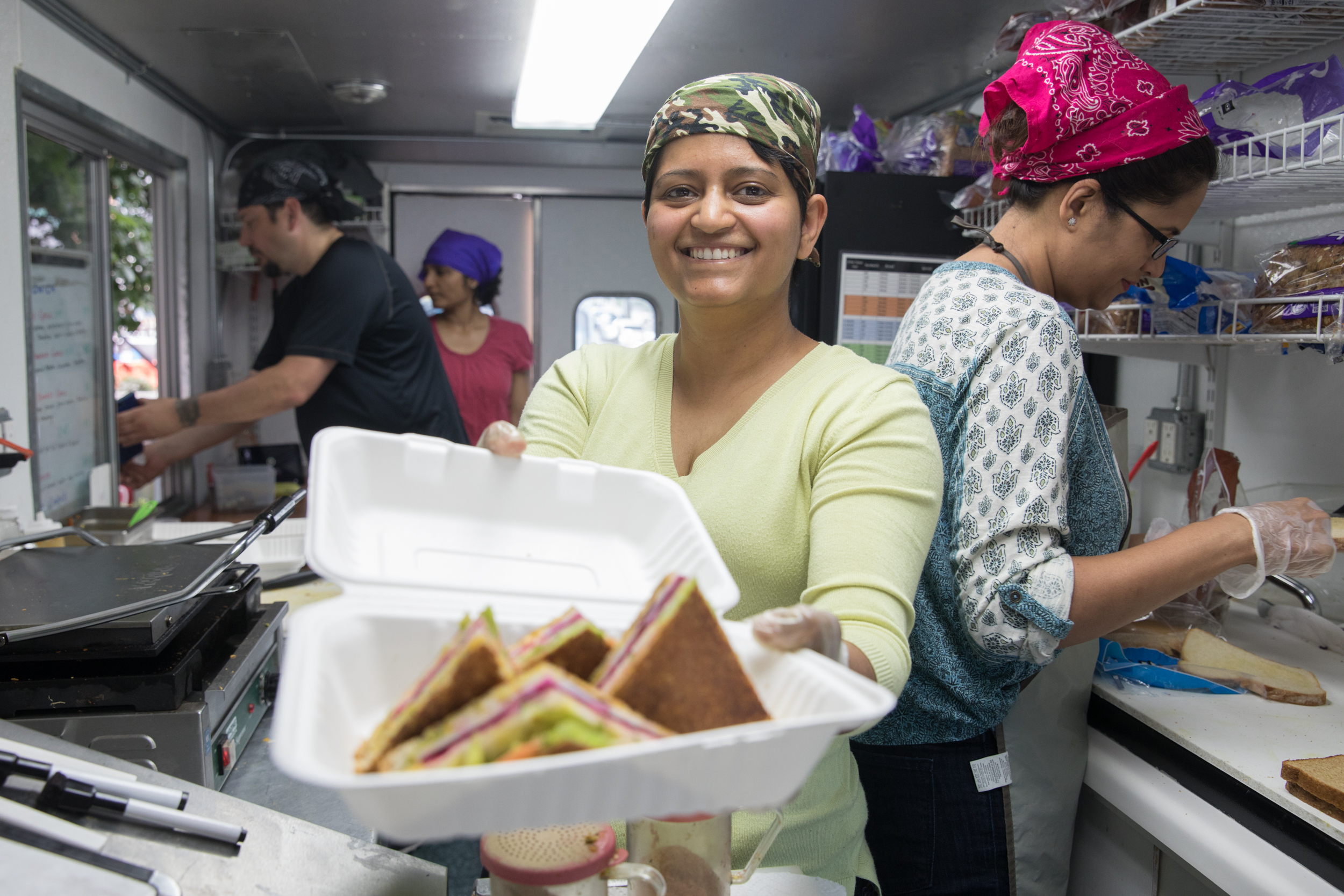 Gayatree Shah at her food truck, VegWich, at the intersection of Terry and Thomas streets in Seattle's South Lake Union neighborhood. (Photo by Matt M. McKnight/Crosscut)

Gayatree Shah at her food truck, VegWich, at the intersection of Terry and Thomas streets in Seattle's South Lake Union neighborhood. (Photo by Matt M. McKnight/Crosscut)

Tech revolution in the food industry

Sitting in the corner of Westlake Park, a lunchtime crowd around Kukree truck thickens and expands as more people join the food truck's line. Owned by Shilpi Gupta and Aarthi Sampath and launched this spring, Kukree’s sides display a rainbow of ingredients over a loud orange background.

The staff inside the truck, overwhelmed by the size of the crowd, fight to keep up with demand. That demand has continued grow in the months since their opening.

Gupta worked in the tech industry for almost a decade, rising to development manager at Amazon. Her last project, “Go Worldwide,” launched in more than a hundred countries. But she felt there was something missing.

“After the project I was bored," she said. "I realized that I wanted to start something from scratch and do something which I hadn’t done before."

Gupta quit her job and followed her passion for food. She researched food industry trends for a year before launching her own business, and saw a movement from fast food to paying more for better quality. Kukree is an effort to serve fine dining in a bowl.

Gupta also discovered an inventory management problem common in the industry. By bringing the technical skills she’d learned into the food industry, Gupta said she is able to run her business extremely efficiently.

“I applied (the) Amazon principle that whatever you do, it must be for the masses and it cannot be limited to a niche crowd,” Gupta said. “I’ve never washed this many dishes in my life! But being hands-on with these tasks also helps me make decisions for the business."

Kukree is a joint venture. Sampath, the winner of Chopped and Beat Bobby Flay, is a co-owner and the mind behind the innovative recipes at the food truck. Gupta focuses on the business, while Sampath manages the cooking and the ingredients. Sampath, thrilled by the idea of connecting the food industry with the tech industry, jumped at the opportunity to work with Gupta.

Sampath explored the region before she started, visiting farmers markets to make sure the area had enough quality ingredients.

“Seattle is a growing market for food,” she said. “The cooks and farmers are very passionate about their product, the clientele are Millennials and Gen X ready to try new flavors, so it is a very exciting city to be in.”

The duo hopes to open few restaurants in other American cities.

Speaking through a smile, Shama Joshi of the Roll OK Please food truck spends much of her lunch rush explaining the kathi roll to new customers.

Kathi rolls are a popular street food in India. Chicken tikka masala — grilled chunks of chicken in a creamy spiced sauce — is wrapped in a whole wheat egg paratha. Vegetables and chutney join the mix, which is then rolled to serve.

Joshi’s father is a soldier, and she was raised following him around India. Her love for food grew deeper while she grew up in different parts of the country. Joshi, who received her master’s in computer science from University at Buffalo in 1998, worked in tech for more than 14 years.

“I used to feel passionate about computers ... but toward the end of it, I said to myself ‘I am done with this,’” said Joshi, who spent much of her career at Microsoft’s Redmond campus.

Joshi said her passion for Indian food compelled her to open a street food truck. She has strong feelings about restaurants serving in-authentic Indian food; as she tells it, most of the Indian restaurants in Seattle serve “ghastly buffet orange-looking sauce that looks … radioactive” and “almost the same sauce is for every dish.”

“I cook from scratch and homestyle, and it [takes] hours to prepare it,” she continued. “The entire process reduces the margin, and it is not a sustainable model to make profit. But I am not going to compromise on it.”

She intends to serve freshly prepared food, unlike most food trucks, which assemble ingredients cooked off-site.

Joshi explained that her income as a food truck owner is very much weather-dependent. If the weather is pleasant, the turnout is about 150 customers each lunch rush.

“I miss the financial independence,” said Joshi, reflecting on her Microsoft days. “Every single day I have to worry about that, how did it go and how will I sustain in winter months. I need to make it little more viable so that the financial worries get mitigated.”

As her business grows, Joshi has started hiring people. Things have gotten smoother, but it’s not always easy. After two years, she’s gotten a handle on how to manage her budget. Leaving a high-paying tech job took some adjustment. “You go from six-figure [salary] to no figures. That was very tough. I changed my lifestyle — no shopping and no vacation. Physically it was hard, but mentally I was happy. …

“The irony of the business [is] that you are surrounded by the food,” she said, smiling.“But you have no time to have a morsel of the food.” 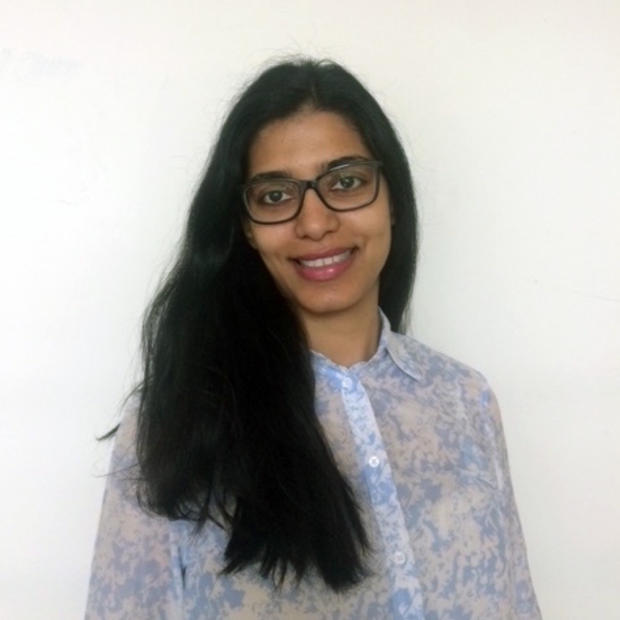 Pinky Gupta is a freelance reporter and fellowship program coordinator for International Examiner. Her focus is on immigration, community journalism and other issues. Born in India, she worked as a staff reporter with daily English newspaper The Statesman in New Delhi and Kolkata.