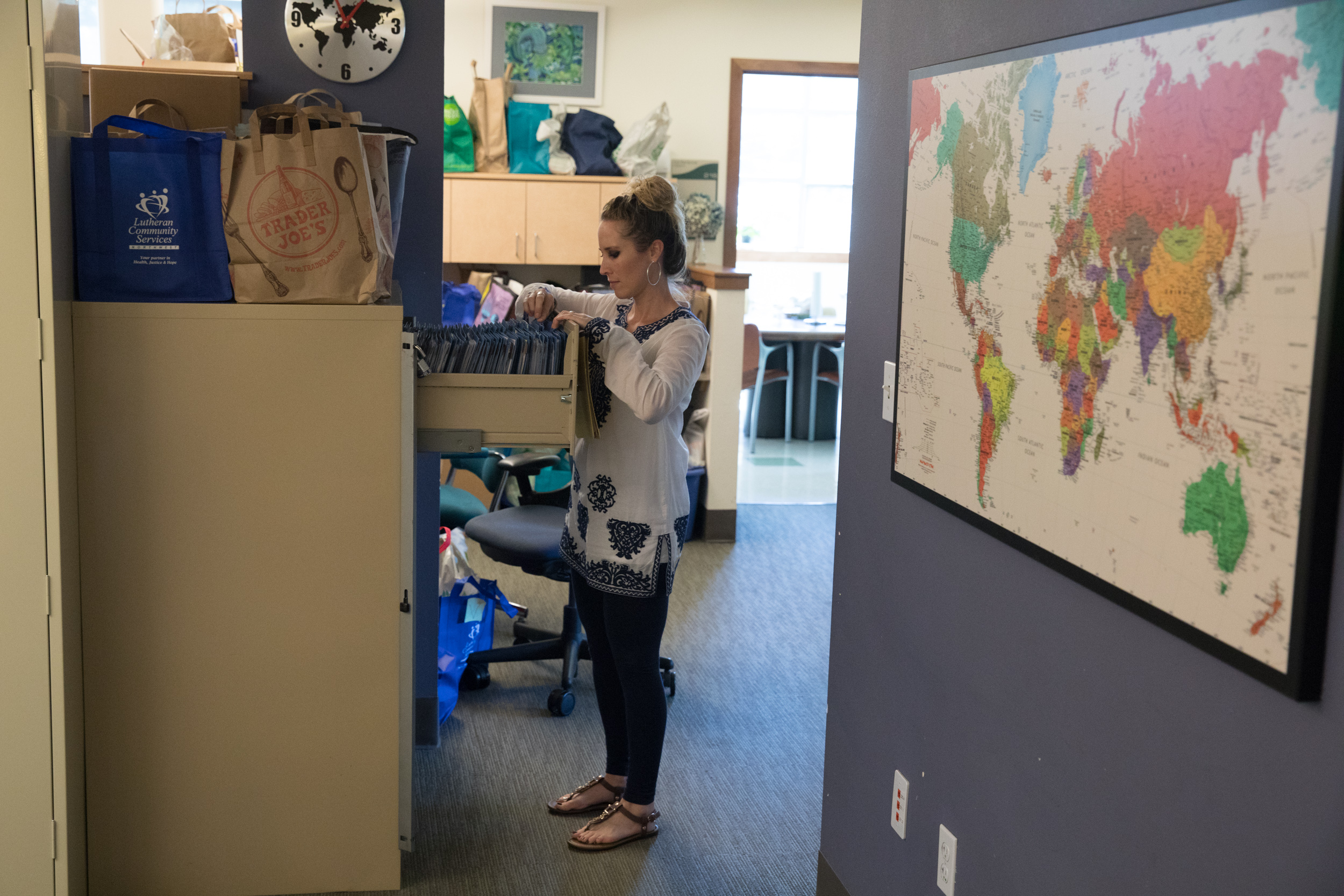 The men from central Africa are a long way from the people and places they fled — thousands of miles from the police officers who threatened Merlin Biembongo for banking the opposition’s money; far from the general who demanded Francisco Antonio’s land.

But they’re still unsettled. One, three, four years they’ve waited here in south King County for the immigration system to return their applications for asylum — blowing past the government's stated six month timeline. In the meantime, they remain unsure of whether they should be adjusting to their new home or preparing for deportation, all the while struggling to maintain housing in a restrictively expensive market.

They may not fear a knock on the door from the people who want them dead, but they do fear the one from authorities who could deliver them back to their countries of origin.

“I have to worry,” says Michael, from the Democratic Republic of Congo, who asked that his last name not be used. His asylum application has been pending for a year. “Someone could come to your door and knock and say, ‘We have to take you.’ You don’t know what’s going to happen.”

Although the stories of family separations near the U.S.-Mexico border are not directly impacting people coming from their homelands, for these men, the chaos in the southwest causes them to wonder: What could come next for them?

And those concerns, paired with the open-ended timeline of their applications, are adding strain to an already stressful process. People who provide support for asylum seekers are voicing concern over the impact that the uncertain climate is having on the mental health of their clients.

Nichole Lundin is the manager for the asylum program at Lutheran Community Services Northwest (LCSNW), a non-profit funded largely through grants and contributions. It’s the only organization in the King County region that offers case management for asylum seekers — including counseling, job placement and help with applications. At any given time, LCSNW has up to 700 clients, including active case management for 400 people who are either seeking or have been granted asylum. And they do this with just four full-time staff.

LCSNW is one leg of a tripod of organizations that serve immigrants, refugees and asylees in the region. Lundin and her colleagues do case management and mental health evaluations; the Northwest Immigrant Rights Project offers legal help; and the International Medical Clinic at Harborview provides primary care medical services.

Lundin has worked with LCSNW for three years now, since its asylum program began to fill a gap in case management for asylum seekers and grantees. But lately she’s noticed a change in the people who walk through their doors.

“Our clients keep up with the media, they keep up with things that are happening in the community,” she says in her SeaTac office. “I think we've seen an increase in the amount of clients that are kind of losing that hope. Things are really changing in the political system and some of them are worried they're not going to get granted [asylum] at all.”

It’s taking a toll. In the last two years, Lundin says there have been at least five attempted suicides among their clients, none completed. That’s too small a sample size to call it a trend. But Lundin says with confidence that, in mental health evaluations, she and her colleagues are hearing more talk of suicide.

“I think with the rates of suicidality increasing in our clients is really around the fact that many of them have been waiting for years,” she says. Although the government is supposed to make a decision within 180 days, at least half of all applicants wait much longer. 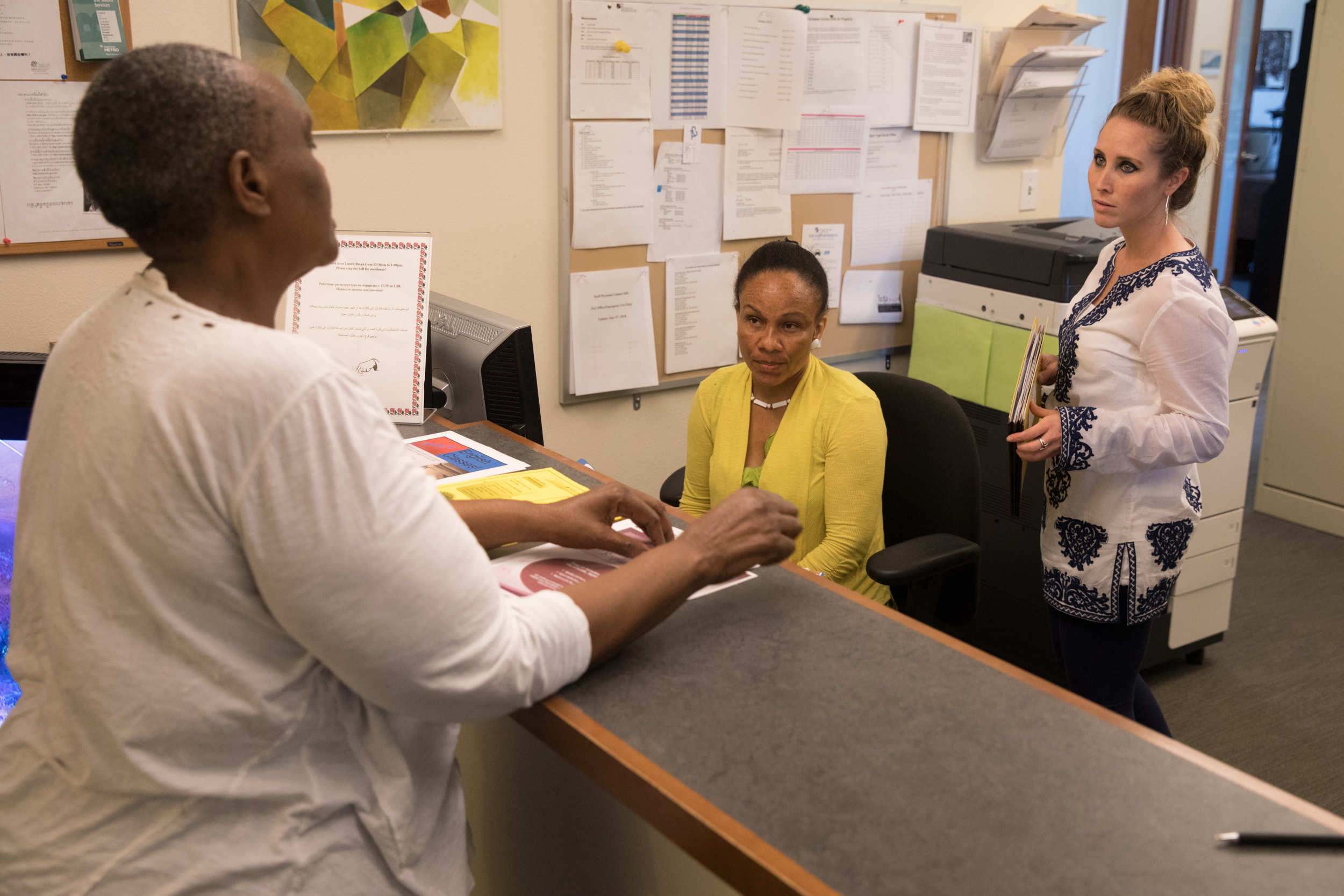 Pheline Malela (center), a case manager for asylum applicants, and Program Manager Nichole Lundin speak with a woman from Kenya who is seeking asylum at Refugees Northwest, a program of Lutheran Community Services Northwest in SeaTac, July 13, 2018.

Pheline Malela (center), a case manager for asylum applicants, and Program Manager Nichole Lundin speak with a woman from Kenya who is seeking asylum at Refugees Northwest, a program of Lutheran Community Services Northwest in SeaTac, July 13, 2018.

In the Democratic Republic of Congo, Merlin Biembongo worked at a bank where members of the activist, pro-democracy group, Filimbi, held money. The nature of his job, he says, meant his signature would appear next to theirs on certain forms, although he says he had nothing to do with the organization.

He says that mattered little to local police, who he claims targeted him and his colleagues for their perceived association with the group. Biembongo — dark-skinned, bald, leaning back in his chair as he switches between jilting English and a French translator — says he watched as friends of his, including his own bodyguard, were killed by the police. He fled to the United States on a tourist visa, which he then overstayed, declaring asylum. That was three years ago and, so far, he’s heard little of his application.

In the meantime he struggles. He frames the moment he witnessed the death of his friends as transformative, altering how he moves through the world. Even here in Washington, when he sees police, he's reminded of the men in uniform back home and he feels anxiety rise up in him like acid reflux. On many occasions, he says, it's so crippling he’s considered killing himself. “He’s feeling like he’s dead,” says the translator.

The purgatory of waiting for his asylum application makes it worse. Biembongo cannot convince himself the danger is in the past nor can he fully commit to the work of recovery because it could all be for naught — he says if he’s sent back he’ll be killed as he exits the plane.

“If he gets asylum, he can just try to forget everything that’s happened in the past,” says the translator, Francisco Antonio, who himself was successfully granted asylum after 10 months in the country. “But there’s no guarantee. He can be deported whenever.”

From its low in 2012, denial rates of asylum seekers have steadily climbed, from 44 percent to 62 percent in 2017, according to Syracuse University’s Transactional Records Access Clearinghouse or TRAC. That number varies greatly by country, with people from Mexico being denied the most, at 88 percent. In the DRC, where Biembongo is from, 45 percent were denied last year.

Lundin says her clients have become even more anxious with recent changes to the asylum interview process. In an effort to clear the backlog, the Trump administration said in January that asylum applicants must have their case heard within 21 days, down from 45. But the side effect of that push, says Lundin, is that they can’t put together as strong of an argument.

“There's a lot of evidence and there's a lot of evaluations that go [on] as part of their claim to immigration — this is the psychological effect of torture or this is the medical effect of torture,” she says. “But all of those take time to collect and 21 days to put an entire asylum case together? There's this concern about, will their stories really be able to be represented?”

Beyond the psychological toll, just surviving as they wait is difficult. Cheap housing is scarce in King County, and while asylum seekers can work with a permit, the jobs do not pay well. One man, Tedoro, who came from Angola and has been waiting four years for his asylum application to go through, works sorting recycling. The job has done little to take his mind off the ongoing wait. As Biembongo tells of his suicidal ideations, Teodoro nods and agree. "I'm tired," he says. "It's too long."

As a result of the low pay and difficult housing, Lundin says nearly 75 percent of their clients struggle with homelessness. “There's really nothing we can do because we don't have a housing program,” she says. “And there's not a lot of places willing to rent to our clients because, one, if they're not working they have no income; two, they don't have a rental history; and then three, we struggle to get our clients social security cards.”

And when they do end up on the streets and crime befalls them, as it often does to people without homes, Lundin says they’re sometimes hesitant to call the police or even go to the hospital for fear of deportation. “We've had clients come in here who have just literally been beaten up or are bloody and it’s like, ‘Oh my God, you need to go the hospital. This is insane,’” says Lundin.

Michael, who is hesitant to reveal the details of why he fled the DRC and is himself separated from his family members who remain, says he must sometimes tune out. He once went three months without reading or watching the news. “If I stress, I’m going to stress out so bad,” he says.

Real relief will only come if he gets his approval. “It would mean everything.”