Affordable housing, but at what cost?

Facing limited housing options and an unhelpful bureaucracy, one tenant has little choice but to stay in a rodent-infested apartment. 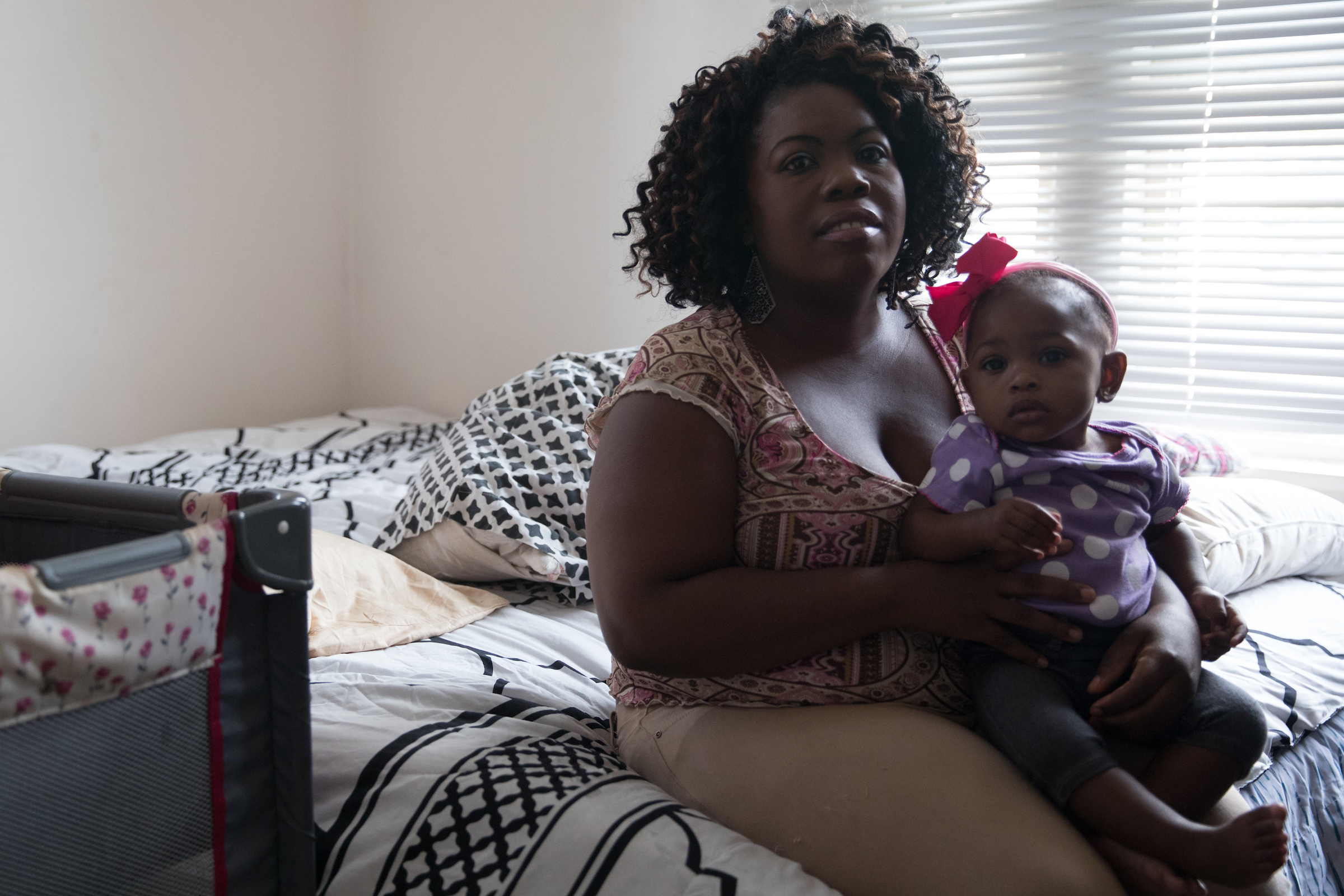 There’s not much space for Turkessa Burrows to avoid the mice. The studio she shares with her 10-month-old daughter, Faith, contains a bed, a crib, a kitchen and a small bathroom, all pressed up tightly against one another. At night she can hear the rodents — she suspects there may be rats as well — scratching inside the walls and at her door. They nibble through the drywall near the heating vent, scurry across what little empty floor space is left and sometimes, as happened last spring, into her daughter’s crib.

The mice are no secret. The managers of Oleta Apartments, the low-income housing project where Burrows lives, know; the city knows; the federal government knows; her neighbors know too, because they are hearing the same scratching. Even online reviews from past tenants warn of rodents. The building has been cited and the Department of Housing and Urban Development has threatened to withhold funding unless the issues are fixed. And Burrows has been offered discounts and assurances from her landlords at Capitol Hill Housing, which owns the building.

But the one thing she wants — to leave and live somewhere else — is the thing she can’t have, at least not right now. Burrows is caught in a grey area in which the authorities recognize that her situation is bad, but do not consider it bad enough to offer relocation help.

With housing prices as high as they are in Seattle, finding a new apartment can sometimes be difficult. But the kind of deeply subsidized rental Burrows needs is so rare, it makes the task almost impossible. For advocates, her case is a troubling sign, an example of the circumstances under which the city’s current slate of tenant rights do not help. Burrows is left with an unenviable choice: abandon an apartment she waited so long to get and enter an unforgiving rental market, or live with the rodents while the building’s management attempts to end the infestation, a task that could take months.

Burrows was homeless once. On the run from an abusive partner in Mukilteo, she lived in her car for a time, eventually finding a place in transitional housing and, after five years on a wait list, into the rent-subsidized Oleta Apartment building. The building, which rumors hold was once home to Eddie Vedder, is now managed by Capitol Hill Housing, a public entity organized by the City of Seattle to own and manage affordable housing. Between the subsidized rent and her Section 8 vouchers, Burrows pays just $96 a month for rent while she works toward becoming a nurse.

If it weren’t for her daughter, Burrows said, she may have just put up with the mice. But she’s concerned enough by the feces and the sticky traps that she doesn’t allow Faith to crawl on the floor. When she found a mouse in her daughter’s bed in June, “I just packed up what I had and left in the middle of the night,” she said.

Burrows complained to her property manager, who promised to reimburse her for a room in a motel. She didn’t have the money up front, but her friend did and she stayed in a Motel 6 for four nights. But there was a breakdown in the payment and her friend couldn’t afford more nights, so Burrows moved to a shelter in Kirkland. She and Faith stayed there for nearly two months, returning to the apartment every day to shower and wash clothes.

(Burrows’ friend never received the reimbursement. When asked about the motel payment, a spokesperson for Capitol Hill Housing, Michael Seiwerath, said there was a miscommunication and that the friend would be paid.)

Burrows’s neighbors have also lodged complaints. William Lawson, who lives next door, said he noticed the mice the moment he moved in in November. He’s taken to sleeping with the light on because of all the scratching he hears. “This is their house,” he said of the rodents. “It’s not my house anymore. I’m a visitor at this point.”

Meanwhile, public agencies have jumped in, using the tools of bureaucracy to pressure Capitol Hill Housing to better manage the infestation. 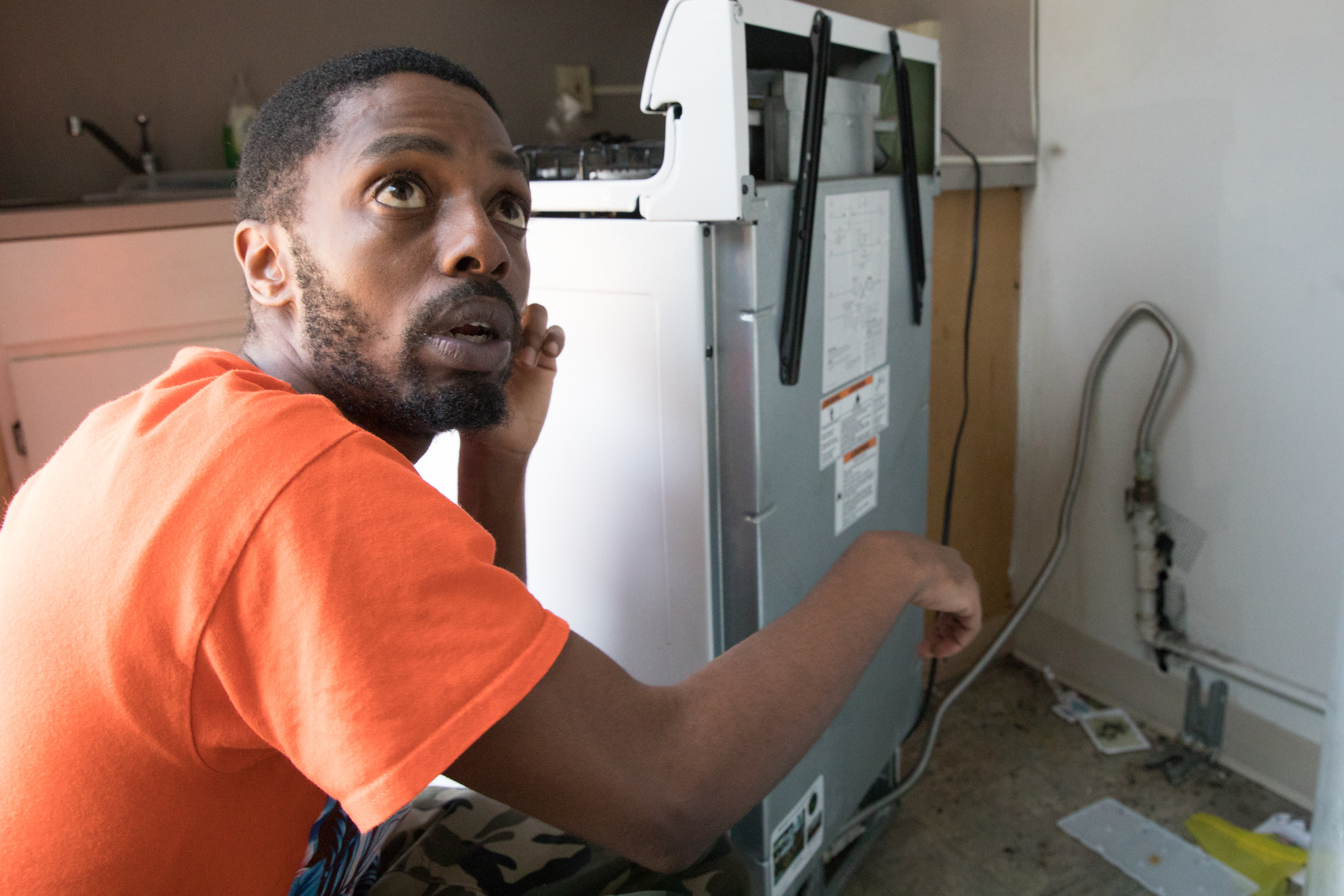 Seattle’s Department of Construction and Inspections recently cited the Oleta building with 20 violations for holes in the floor, wall and ceiling coverings, poor plumbing and what Wendy Shark with the department referred to as a “rodent infestation.” If the issues are not fixed by Sept. 5, the department will start fining the owners $150 a day. After 10 days, it will go up to $500.

But while SDCI found violations, the conditions did not rise to the level of emergency, which means Burrows will not receive money from the city to relocate. “The most serious violation observed and called out by the inspector is a rodent infestation which also is not a violation that warrants a unit to be vacated,” Shark said in an email. “These are maintenance and repair issues that we come across quite often.”

The Department of Housing and Urban Development also recently sent Capitol Hill Housing a letter threatening to suspend or terminate its contract with the building if the conditions were not improved.

Such a move would render Burrows’s Section 8 vouchers unusable at that location, which she said would raise her monthly rent to $769. She could take her vouchers elsewhere, but their buying power in the region has been steadily decreasing — as Crosscut has reported, last year just 44 percent of voucher holders in Seattle found a place to use them before they expired.

The scarcity of available affordable housing has created a choke point in the local housing market for people earning little to no income. A recent estimate from the Housing Development Consortium found Seattle needs an additional 10,000 homes for very low income people.

As for Burrows, she’s weary, recalling her 5-year process to get to the Oleta building in the first place. “It’s a housing crisis,” she said. “You can’t afford it.”

“Turkessa is an interesting case because it’s not eviction, but she has been effectively evicted from her home,” said Edmund Witter, a lawyer with the Housing Justice Project, one of few legal resources for tenants. He’s one of three attorneys who deal with up to 1,900 eviction-related cases at a time.

Witter adds that Burrows is lucky to live in Seattle where she can at least get an inspection from a department like SDCI. That is more than most tenants elsewhere in Washington state can hope for.

But while the landlord may be issued citations from SDCI, Burrows’ options as an individual are still limited. In New York and Minnesota, tenants have an expedited path to bring legal action against a landlord. A judge could even threaten a landlord with jail time if an issue goes ignored, said Witter. In Washington, though, Burrows would have to take the landlord to small claims court for damages, which could drag on for months or even years without any guarantee that the problem will be fixed.

That leaves Burrows with three options, said Witter. She could do a “repair and deduct,” meaning she deals with the problem herself and charges her landlord. She could set up an escrow account, in which she could withhold her rent from her landlord until the issue is resolved (Witter said he never advises clients to do this because of its complexity). Or she can leave.

Expanding those options is something that activists have been pushing for — to some success, passing several tenants’ rights laws in recent years. Still, Xochitl Maykovich, political organizer with the Washington Community Action Network, said she would like to see more aggressive pro-tenant laws in Seattle, similar to those in Minnesota or New York.

“I think a lot of people in SDCI do want to do the right thing and they do want to make sure that landlords are keeping places habitable,” she said. “But I think a lot of the problems that exist are because the laws don’t work in a way that’s tenant friendly.”

The city already requires private landlords to bring apartments up to code before they can raise rents, but that law means little in the kind of rent-controlled setting that Burrows is living in. The city also recently shortened the length of notice that inspectors must give to landlords, an attempt to reduce cosmetic cover ups. Councilmember Kshama Sawant has said she intends to introduce additional legislation to slow “economic evictions,” but has not yet done so.

Maykovich with Washington CAN said she also wants the city to better fund and expand relocation assistance. Low-income tenants can currently get up $4,500 in help, but their unit must be considered uninhabitable — the apartment would need to be shut completely by the city as a result of catastrophic issues like flooding or fire. Rodent infestations, as Burrows has experienced, do not rise to that level.

Seiwerath from Capitol Hill Housing said that the housing nonprofit is currently working to fix the problem. It has turned to a new rodent control company and is repairing the spaces between floors to make it harder for the rodents to move through the building. The infestation should be under control by the end of the year, he said.

Capitol Hill Housing has told Burrows they will not evict her if she doesn’t pay rent until the issue is fixed. Seiwerth also said they are currently working with Burrows to find her a different apartment. Capitol Hill Housing has other buildings, but they’re not as deeply subsidized. Seiwerath acknowledges he doesn’t know when space might open in a similar building.

For now, Burrows is back at the Oleta building, having returned several weeks ago. The shelter in Kirkland was wearing her and her daughter down, she said. There they slept on mats on the floor. She sleeps now with her daughter in her bed rather than in the crib, paranoid that another rodent might crawl into her crib.

Burrows still thinks about the abusive relationship in her past and the decision to leave, which placed her on her current path. “I’m like, should I have even applied for housing?” she wondered. “But I’m doing it for my daughter, not for me. If it was just me I would have packed up and gone to a different state or something. But I’m not going to run. I’m going to fight this.”