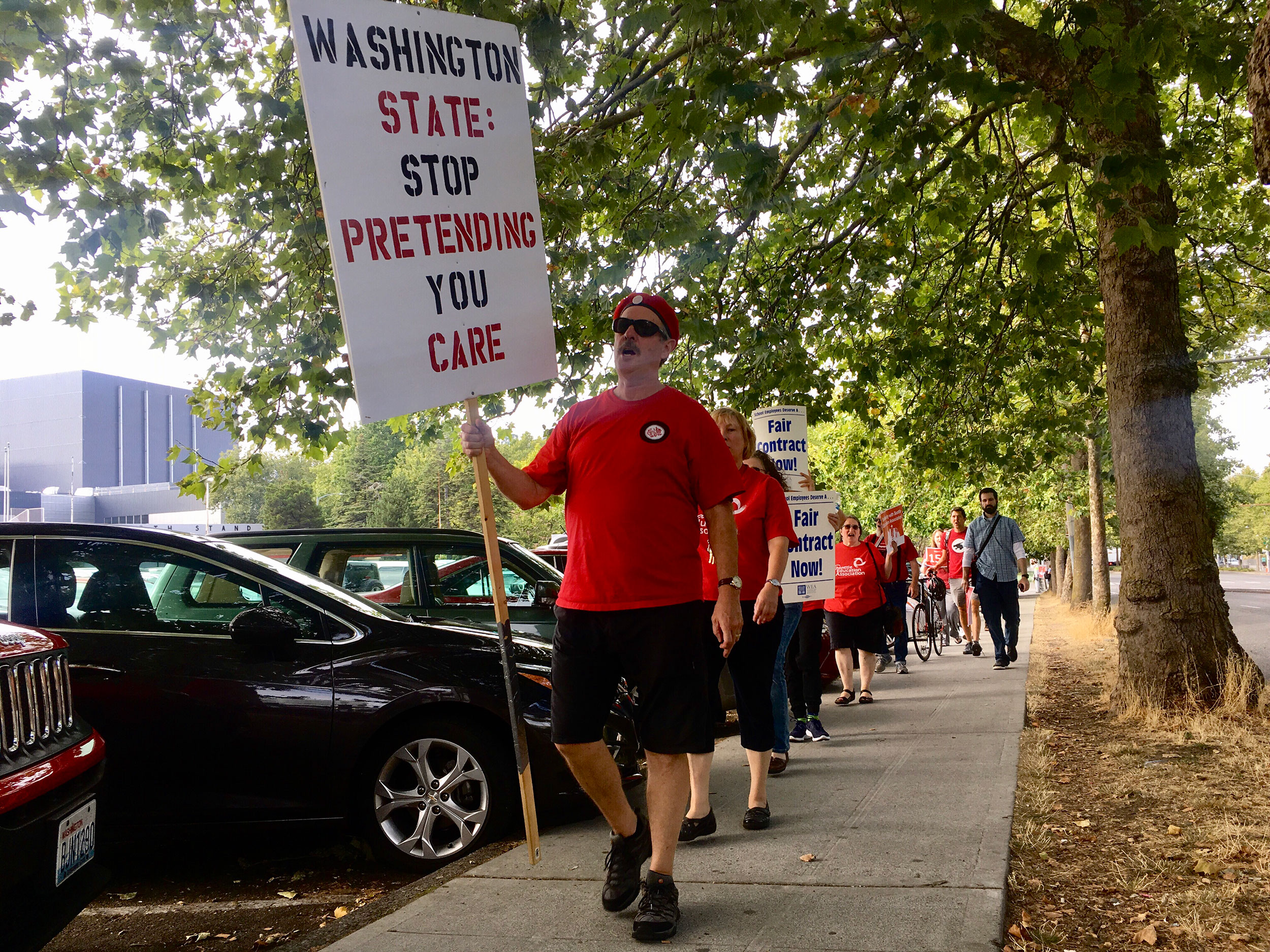 Teachers from the Center School march through Seattle Center on Wed., Aug. 29, to raise awareness of the impending strike by the Seattle Education Association. Teachers voted on Tuesday night to strike if they were unable to reach an agreement with the district before the start of school on Sept. 5. (Photo by Mark Baumgarten/Crosscut)

Karla Petersen relies on Seattle Public Schools. As a 59-old-year-old adoptive parent of eight Native American special needs children ranging in age from 6 to 15, she was counting on the beginning of the school year to bring an end to a summer of caretaking.

“They’re bored by the end of the summer,” Petersen added. “For the most part, kids thrive on routine and learning and curiosity and seeing their friends.”

But with the possibility of a teacher strike looming, Petersen finds herself among the Seattle parents and support organizations scrambling to find alternative care for students that will last through the current fight over teacher salaries, which threatens to delay the start of the 2018 school year.

“I’m all for the teachers. I fully support them,” said Petersen. “We need to have teachers that love going to work and feel like they’re valued.”

But “it’s really hard on parents when this happens. I think it’s even harder on the kids because they’re all excited,” she continued.

The teachers’ union, the Seattle Education Association, voted on Tuesday night to authorize a strike. If there is no resolution to current contract negotiations by the first day of class on Sept. 5, the teachers will not go to work and students will not go to school.

The teachers and the district are at odds over the size of a pay increase resulting from new state funding, as well as other benefits, such as health insurance for substitute teachers. Under their current contract, teachers earn between $50,600 and $100,800. That's less than their counterparts in neighboring districts now make following their own salary adjustments. In Bellevue, for instance, teachers will make between $53,000 and $111,100 during the 2018-19 school year, while the range in Shoreline is now $62,100 to $120,200.

The widespread contract negotiations are the result of a settlement in the long-running school-funding case known as McCleary. Last year, state lawmakers approved a 2017-19 budget that resulted in a statewide property-tax hike that will raise $1 billion to pay for higher salaries for teachers and other school staff over two years (while also curtailing the collection of local property taxes that districts had long relied on to provide adequate wages).

A late-2017 state Supreme Court ruling ordered the state to fast-track the raises, and so the legislature left it to the individual school districts and their labor unions to collectively bargain the new salary schedules in time for the 2018 school year.

Now, with days remaining before the school year is set to begin, the Seattle School District and its teachers have just about run out of time to reach an agreement. Meanwhile, anxious parents are making contingency plans just in case.

On Facebook, a woman in Renton offered up her home to parents in Columbia City struggling to find a place for their children. Someone else promoted homeschooling, stating that “a lot of local parents are simply fed up.”

The city’s Office of Emergency Management was expected to release a plan that could include the expansion of before- and after-school programs into all-day camps, according to Rachel Schulkin of Seattle Parks and Recreation.

Summer Stinson, an attorney and co-founder and president of Washington’s Paramount Duty, a group of parents and allies advocating for the state to fund public schools, said she was relieved when she received a message from the Boys and Girls Club of North Seattle announcing that they would be open should a strike occur. Stinson, a recently divorced single mom, could leave her 12-year-old son at the club at a rate of $25 per day.

But Stinson cautioned that parents with younger children might be forced to pay a much higher rate, which could be devastating for “so many parents who are already on the edge in Seattle.”

Many parents might also be concerned about their child’s next meal, which is provided to many lower-income students at a free or reduced rate. Stinson pointed out that Washington has one of the highest homeless rates in the country: 1 in 15 K-12 students were homeless in Seattle in the 2015/2016 school year, according to the Washington State Office of Superintendent of Public Instruction.

Still, “as nerveracking as it can be, many people support the larger goal,” Stinson said. “The teachers have really been priced out. They deserve to live in the communities in which they teach.”

Stinson said she has heard personal stories of teachers being forced to work multiple jobs to make ends meet in the city.

“This really shows us that we have become a city of have and have nots,” Stinson continued. “At some point we have to decide as a city: What do we value?”