Trump promised exceptions to the travel ban. A new lawsuit says it isn't so 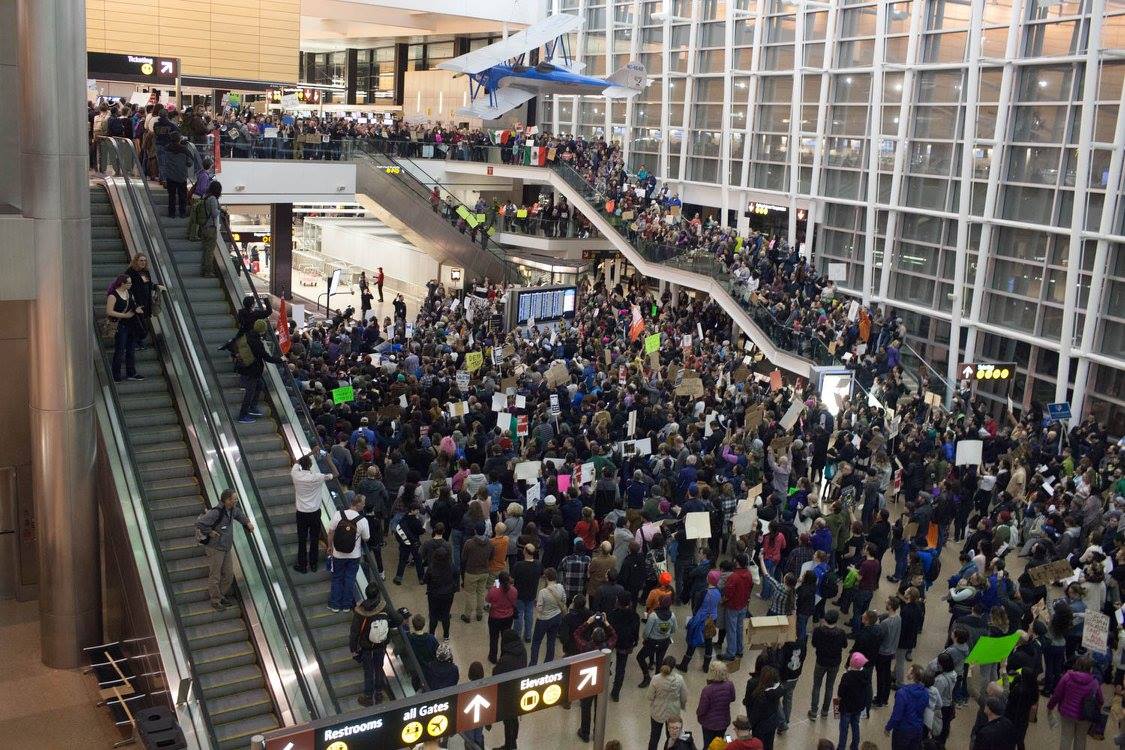 Immigrant-rights organizations and approximately a dozen individuals sued the Trump administration Wednesday for what they claim is the haphazard handling of the travel ban.

Specifically, the lawsuit, filed in U.S. District Court for the Western District of Washington, argues that while individuals traveling from the five Muslim-majority countries subject to the ban are being allowed to file for waivers, the vast majority of these cases are being denied without explanation.

As a practical matter the waiver system, the lawsuit argues, has “amounted to nothing more than an empty promise.”

In a press call on Wednesday, Roxana Norouzi, deputy director of OneAmerica, a Seattle-based nonprofit named as one of the plaintiffs in the lawsuit, called the waivers “a sham.”

“We’re holding the president to his own words,” she said, adding, “we must not forget the real stories of suffering.”

OneAmerica and Pars Equality Center in Los Angeles filed the lawsuit “on behalf of themselves and all other persons in the United States for whom … the waiver provision interferes with family reunification or the ability to travel internationally and return to the United States.”

The lawsuit argues that families “remain unnecessarily separated, and cannot celebrate traditional milestones together like births, graduations, weddings, and birthdays, or provide support through illness and hardship.

Babak Yousefzadeh, president of the Iranian American Bar Association, went as far as to say on the call Wednesday that the Trump administration’s so-called Muslim ban “may be intentionally designed to deny waivers entirely,” despite promises to the contrary.

Yousefzadeh said the government had berated some of his clients for trying to submit evidence in order to qualify for a waiver. The lawsuit also points to court testimony of a former consular official and State Department employee who in a sworn declaration admitted “that there really is no waiver,” because consular officers have been instructed “to determine at all possible cost that visa applicants are not eligible to even apply for a waiver.”

According to Trump administration officials, individuals should be granted waivers based on three criteria: if denying entry would cause undue hardship to applicants; if entry would not pose a threat to national security or the public safety of the United States; and if entry would be in the national interest, though advocates say it’s not clear how one would go about proving that aspect of the criteria.

The so-called Muslim ban has been in effect since December 2017. On June 26, despite lower court rulings, the U.S. Supreme Court upheld the ban, which denies entry into the United States for individuals from five Muslim-majority countries — Iran, Libya, Somalia, Syria, and Yemen — as well as North Korea and Venezuela.

Advocates pointed out that even before the ban was upheld, Supreme Court justices themselves were skeptical of the waiver system. In oral arguments in April before the Supreme Court, “Justices Breyer and Sotomayor specifically asked about the waiver process and whether ‘it is, in fact, a real waiver process,’ as opposed to mere ‘window dressing,’” the lawsuit reads.

Among the individuals named in the suit are Pamela Whitehall Raghebi, a U.S. citizen who lives in Seattle who has been married to her husband, Afshin Raghebi, an Iranian national, for more than seven years.

According to the lawsuit, Raghebi left Iran due to fear of persecution for his religious beliefs. He first moved to the United States in 2006, where he learned how to install windows and glass. He met his wife, Pamela, four years later, after working on the windows of a senior living home where she worked as a receptionist. They married in December 2010 and started running a glass and window installation business together.

Raghebi has been in Turkey for months, waiting for a consular officer at the Department of State to rule on his waiver in the hopes that he may return to Seattle.

“The separation of these spouses has been emotionally devastating for each of them. They speak every day by telephone,” the lawsuit states. The separation has also caused financial hardship.

Zeinab Mohamed Hassan, a U.S. citizen of Somali origin who lives in Kent, is another of the plaintiffs named. Her two daughters have been displaced from Somalia and currently live in Kenya. Hassan has not seen them since 2016.

“Although she talks to them every night on the phone, she fears constantly for their safety and physical well-being because they are young, foreign-born women without a guardian in Kenya, where the government refuses to give Somali refugees the same protection as Kenyan nationals,” the lawsuit reads. They “are vulnerable either to being kidnapped and forced into marriage and/or raped by gangs, which operate with impunity throughout Kenya.”

“Every day that her daughters remain in limbo in the waiver process,” Hassan worries “that something terrible will happen to them before she can reunite with them in the United States.”