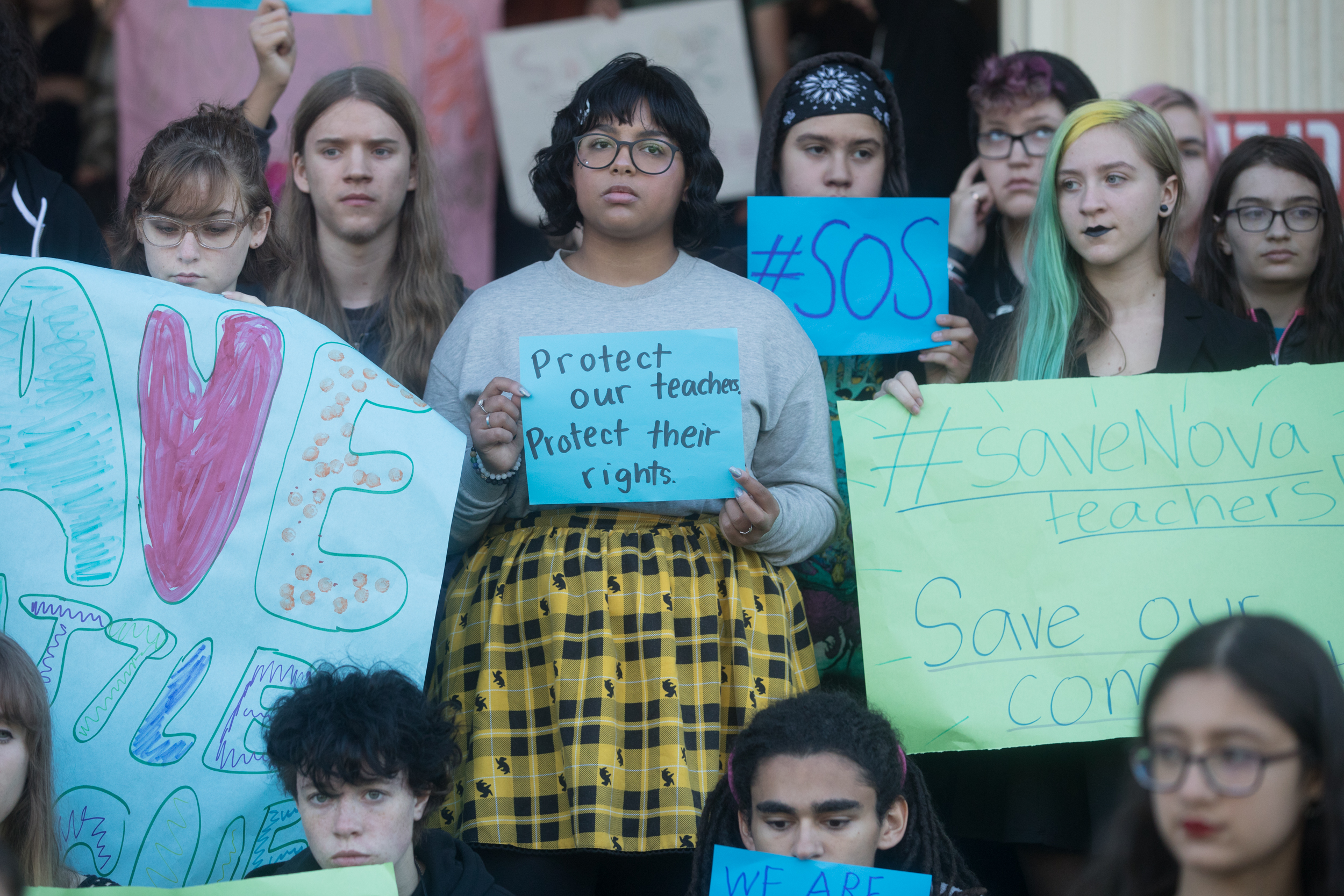 Even after managing to avoid a teachers’ strike, Seattle is still having a rough start to the school year — at least in the view of students and parents opposed to the district’s plan to reshuffle teachers just a few weeks after classes began.

Students at Nova High School gathered Monday morning for a press conference where they expressed frustration with the district's decision to remove two teachers from the Central District alternative school and announced plans for a protest. On Tuesday at 12:30 p.m., the students will walk out of classes and march to City Hall.

Nova is one of nearly 20 Seattle schools losing teachers as the district adjusts staffing levels from numbers based on estimated student enrollment to those based on actual enrollment. But students say because of its small size — serving approximately 270 students — and majority-LGBTQ student population, Nova will be disproportionately affected by the district’s plan.

At the student-led press conference, pupils from Nova shared their disappointment one by one while holding signs that read “#Save Nova teachers," and others provided by City Councilmember Kshama Sawant’s office that read “Tax the rich, fund our schools.”

Surrounded by cameras and reporters, fifth-year-senior Jack Darling, 18, spoke about his troubled past, which included dropping out of school. Darling said that his future looked bleak before he found Nova. It was the first school where Darling was able to complete the year.

Mirabai Kukathas, a 16-year-old junior at Nova, echoed those sentiments.

“Nova is the first school that has made me feel like an intelligent, worthy person. This is mainly because of our teachers,” Kukathas said.

Last week, the Seattle School District released a statement explaining that “funding for staff is based on student enrollment.”

“This year's count was 724 fewer students than projected, resulting in a shortfall of $7.5 million,” the statement read. So, the district explained, teachers at under-enrolled schools need to move to facilities with higher-than-anticipated enrollment.

The district plans to move 33 teachers in total. According to Braxton Kellogg, the district's executive administrative assistant of communications, 12 schools stand to gain a teacher, while 19 schools will lose staff. In addition, some schools will not fill teacher vacancies.

In a follow-up email, the district explained that the reshuffling is taking place because this year it didn’t “have as much financial flexibility to keep schools whole and pay for staff at under-enrolled schools.”

“We understand that any change to staffing and school schedules is frustrating for staff and families,” the district said. But, it added, “a race and equity lens was used to support our schools with the highest need.” The district, for example, said that based on enrollment Nova could have lost more than two teachers.

The district also made clear that the reassignments do not amount to an overall reduction in staff. Teachers’ contracts will be honored, Kellogg said.

That, however, is of little consolation to students and parents who have already grown attached to teachers the district is now threatening to displace.

Take, for example, View Ridge Elementary School. Parents there are upset over the potential loss of Victoria Ang, a second grade teacher.

“Making the decision to layoff teachers after the school year started seems really irresponsible,” wrote Adriana Gil Miner in a letter to Mayor Jenny Durkan, which the mother of two shared with Crosscut. Miner’s daughter, Alma, is enrolled in Ang’s class and, since classes began Sept. 5, has already grown attached to her, she explained.

“The most important relationship is student/teacher and that should be protected first and foremost. I fail to see how the district is having kids' education at the top of the agenda with this decision.”

Miner, vice president of communications at Tableau Software, added that she felt especially distraught because she had moved to Seattle from New York City specifically because she believed it would be a good place to raise a family and due to the quality of the public school education system.

Another parent, Elizabeth Krakow, said her daughter, too, has a special connection with Ang, but now stands to lose her.

“My daughter is new to the school. For the past two years, she dreaded academics and the social pressures of school life,” Krakow wrote in an email. After three weeks in class, “thanks to Ms. Ang, my daughter now looks forward to school. She gained the confidence she needs to make friends. No other teacher has managed to inspire her like that.”

Ang, Krakow said, “is not an empty shell that can be simply replaced. She is a person with whom our children have already formed an important and constructive bond.”

“Other private school parents warned us that if we go to public school, we will have no voice in our children's education. Such an episode as this makes that warning ring true,” Krakow concluded. “Dispensing of a teacher after the children have already formed a bond with her sends the message that teachers are expendable. It does not breed respect for teachers among children.”

Ang, for her part, said she was disappointed her very first teaching assignment out of grad school had turned out to be so messy, especially since she had prepared for it meticulously, spending a month to decorate her classroom. She said she’s not sure yet what position will be offered to her and that she might be forced to become a substitute teacher instead.

“I think it’s totally unfair not only for myself but for the students,” Ang said. “They’re not thinking about the best interests of the students.”

Michael Tamayo, vice president of the Seattle Education Association, the teachers’ union, said he does not anticipate any teachers being offered substitute teacher jobs but only full-time, equivalent positions. Both he and Kellogg said the district plans to honor the teachers’ contracts. Yet, widespread fears remain.

“I didn’t pay $80,000 in graduate school to be a substitute teacher,” Ang said, while mentioning the possibility of suing the district. “I pray to Jesus that they will give me options.”

Tamayo said he suspects the district is already feeling the pressure of the budget shortfall projected for the 2019-2020 school year due to the curtailing of the collection of local property taxes that districts have long relied on to provide adequate wages.

Still, students and parents remain disappointed, especially since enrollment numbers at some schools like Nova tend to experience an uptick later in the year.

One of the school's teacher, Allison Sterrett, said, “Nova is a family and our students feel like they are losing a part of their family.”

“As 60 percent of our student population identifies as LGBTQ+, many kids have already been mistreated or pushed out of other schools (or even pushed out of their own families),” she said.

“They already feel like the district doesn't care about them, and this staffing cut is yet another message that they don't matter to Seattle's decision makers.”

Second grade teacher Ang, who is 27, said her students, though young, are keenly aware of what’s happening throughout the district — and have offered to throw her a going-away party.

by / February 2
Inside Crosscut