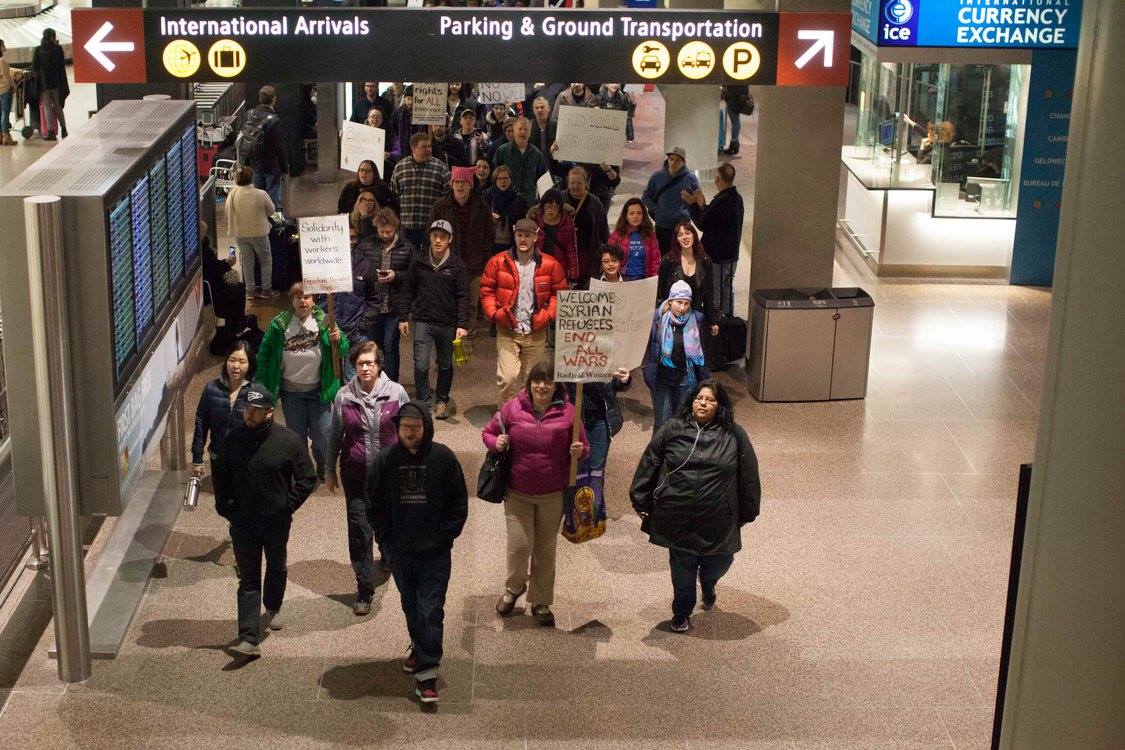 Refugees arriving at Sea-Tac will now be greeted by what some may view as a surprising message in the midst of President Donald Trump’s reign:

“Here at the Port of Seattle, we believe that diversity makes us stronger as a nation, and improves our ability to serve the public.”

That message, in both English and Spanish, will scroll on TV monitors in gate and baggage claim areas, officials announced at a press conference Monday.

The PSAs are part of a broader effort to welcome refugees into the country, connect them with services, and, when possible, provide them with pathways to U.S. citizenship.

Port of Seattle Commission President Courtney Gregoire said local refugee organizations will also be given special security clearance, enabling case workers to greet and assist refugees as soon as they arrive. The Port of Seattle is partnering with organizations such as One America and World Relief to help with everything from housing to schooling for children.

Chitra Hanstad, executive director of World Relief Seattle, said 10 case workers have been given security clearance so far. The plan is to eventually green light other local nonprofits such as Lutheran Immigration and Refugee Services, and Jewish Family Service.

Richard Stolz, executive director of One America, said the ads and personal assistance are examples of how Seattle is “becoming a more welcoming community, even in the face of the pressures being created.”

Stolz also emphasized that “becoming a citizen is the most important means by which immigrants can protect themselves and their families at a time when our federal government appears willing to do anything it can to discourage immigration and international travel to the United States.”

At the press conference, officials pointed to the significant decline in the overall number of U.S. refugee admittances under President Trump. Right now, the U.S. is on track to admit about 21,000 refugees by the end of this fiscal year, far short of the already low refugee cap of 45,000 set by the administration. Two years ago, in 2016, the U.S. admitted about four times that number — 84,995 refugees.

The number of refugees admitted to Washington state alone has dipped from 3,200 in 2016 to barely over 1,000 so far this fiscal year.

On Monday, the Trump administration announced plans to lower the cap on the number of refugees that can be resettled even further next year to 30,000. According to The New York Times, that is “the lowest ceiling a president has placed on the refugee program since its creation in 1980.”

The substantial cutback in refugee admittances comes as the administration is under fire for some of its other immigration policies. Across the country, approximately 3,000 immigrant children were separated from their parents under Trump’s “zero-tolerance” policy, which sought to criminally prosecute anyone who crosses the border without documentation.

Port of Seattle Commission President Gregoire said the idea for the new PSAs and partnerships with refugee organizations stemmed from the “New Americans Campaign,” a national network of immigrant-rights groups, community leaders, faith-based organizations and legal experts established in 2011 in over 20 cities, including Seattle, that seeks to simplify the naturalization process for lawful permanent residents.

Stolz said Sea-Tac is the first airport to work with the campaign, although other cities are moving in the same direction.

The PSAs will run at airport gates for one minute approximately once an hour, and in the baggage claim area for 15 seconds every three minutes.

In addition to welcoming refugees, the PSAs advise new arrivals that they may be eligible for U.S. citizenship if they meet certain criteria: they are at least 18 years old; a green card holder; and a continuous resident in the U.S. for at least five years.

Gregoire said she sees this effort as picking up where she left off last year when she raced to the Sea-Tac airport in an effort to curtail the Trump administration’s so-called Muslim travel ban. In January 2017, in the midst of national protests over the Trump administration’s new plan to restrict travel from Muslim majority countries, Gregoire and others were successful in stopping the deportation of two detainees booked on a flight back to Dubai.

Gregoire added that Sea-Tac airport functions in large part thanks to the help of immigrant labor.

Trump’s “false national security argument” doesn’t add up, Gregoire said. “We can build this community from the ground up.”