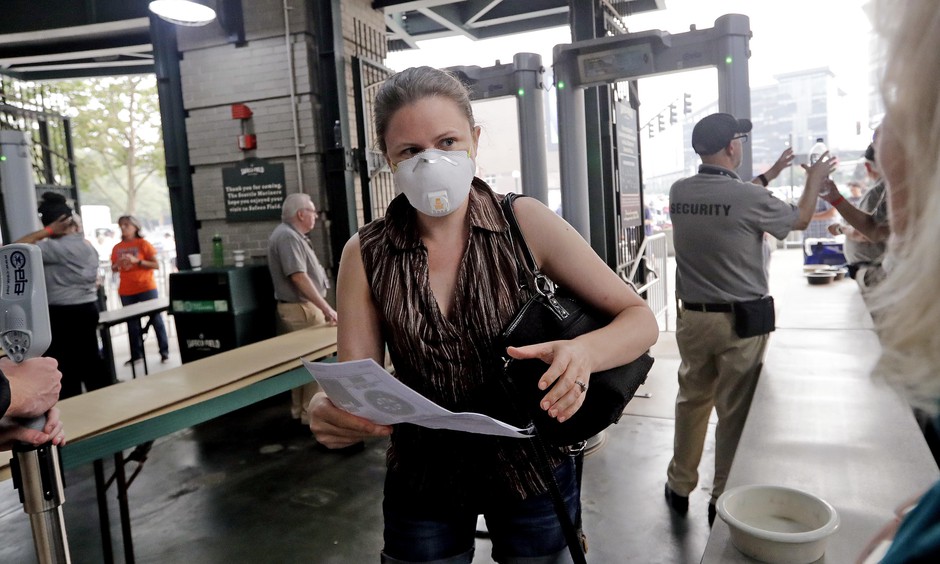 A fan enters the Seattle Mariners ballpark wearing a mask to help protect against smoky skies before a baseball game against the Houston Astros, Monday, Aug. 20, 2018, in Seattle. (Photo by Elaine Thompson/AP)

Deaths related to air pollution from wildfires could double by the end of the century, according to newly published research into the links between climate change, wildfires and human health.

Deaths related to air pollution from wildfires could double by the end of the century, according to newly published research into the links between climate change, wildfires and human health.

The study, published Monday in the journal GeoHealth, looked at a type of pollutants called PM2.5, which can be produced by cars, industrial sources and fires. In the U.S., about 140,000 premature deaths per year (roughly 6 percent of all deaths) are linked to PM 2.5. Of those deaths, about 17,000 are linked to wildfires. By the end of the century, that number could increase to as many as 44,000 deaths related to wildfire smoke.

“Overall, we’re expecting that wildfire pollution is going to be a larger portion of the health burden,” says Bonne Ford, an atmospheric scientist at Colorado State University and an author on the study.

PM 2.5 are just particulates in the air that are 2.5 microns in size, which is extremely small. The particles’ small size allows them to get deeper into our lungs than other larger pollutants, where they can cause short-term and long-term health problems. In this study, the researchers looked at the amounts of PM 2.5 under two different climate change scenarios: a middle of the road one and a worst-case one. Then, they modeled how the interactions of climate, land-use and population changes would change PM 2.5 concentrations. It is one of the first studies to take all three factors into account.

Even in the middle-of-the-road emissions scenarios, by 2100, fire-related pollution would account for more than half of the PM 2.5 over the U.S. each year.

Many of the areas with the largest increase in PM 2.5 don’t come as a surprise: the Northwest and California, for example, are already experiencing larger, more frequent fires. But this model also showed increases in pollution over the Great Lakes and other areas. That’s because smoke from fires on the West Coast, in Canada and in Alaska can drift in the jet stream, spreading pollution far beyond where it started.

There are some steps that can be taken to decrease the risk of deaths from wildfire smoke, Ford says. The most obvious is to mitigate the effects of climate change. Their research showed large differences between the amount of smoke produced in middle-of-the-road warming vs worst-case scenarios. It’s also important to stay inside when it’s smoky and to make sure air conditioners have functioning filters.

There is some good news. PM 2.5 doesn’t just come from fire smoke: it’s produced by a lot of sources, like cars and industry. And those have been getting cleaner over the last century. Overall, total deaths related to PM 2.5 are expected to decline in the U.S., particularly in areas that are already heavily polluted like the Ohio River Valley.

But in places like the Northwest, where wildfires are becoming larger and more frequent, overall deaths will rise. It’s becoming normal to wake up with a scratchy throat and a post-apocalyptic smoky orange sky.

“We’re trained from an early age to smell fire and know that it’s a danger. It’s becoming a normal smell,” Ford says, “It shouldn’t be something that you get used to.”