Without a third streetcar line, are the other two worth keeping?

The downtown Seattle line could quadruple ridership, but cost $252 million. 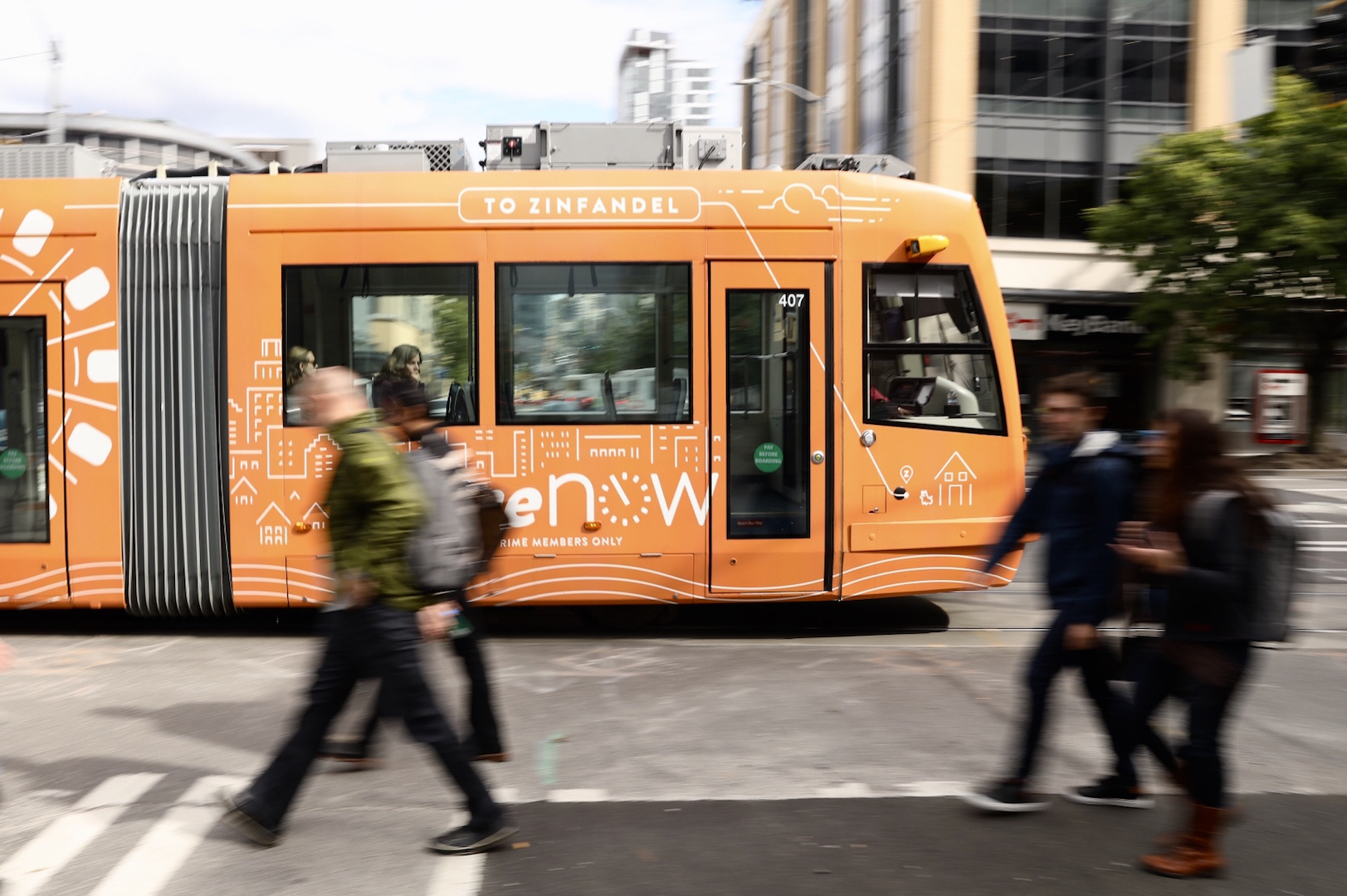 If all had gone smoothly, Seattle’s downtown streetcar line would’ve opened sometime in 2020. The Center City Connector would be running 1.2 miles from where the First Hill streetcar currently ends in Pioneer Square, up First Avenue, and along Stewart Street to the South Lake Union streetcar’s endpoint near the Westlake Mall downtown.

By virtue of its path through Pioneer Square and past the Seattle Art Museum, Pike Place Market and other locales, the new streetcar would likely serve tourists as much as residents.

But transportation advocates say the estimated $252 million addition is very much a transit project, rather than an economic development tool meant to spur investment as is often the case with streetcars. The new streetcar would have its own lane, separated from car traffic, meaning it wouldn’t be hindered by the traffic jams that plague Seattle streets for much of each day and can literally stop a First Hill and South Lake Union streetcar in its tracks.

“It’s kind of the best streetcar project we’ve seen in America. It’s the thing that will rescue the weak, mixed-traffic stubs the city has already built,” said Jon Orcutt, communications and advocacy director for TransitCenter, a New York-based think tank.

But all has not gone smoothly. After revelations about higher-than-projected construction and operating costs, Mayor Jenny Durkan halted work in March on the downtown streetcar and hired consulting firm KPMG to audit the project. Two weeks ago, the city released an abbreviated version of the $500,000 report that projects rosy ridership and revenue for the streetcar — but a grim final construction cost.

Seattle’s streetcar network would get about 5 to 6 million rides annually.”
— KPMG Report

The project now sits in limbo, waiting for Durkan to decide if its potential benefits outweigh the costs — or if the whole thing should be cancelled. Transportation advocates, community groups, business owners and the Downtown Seattle Association have all lobbied the mayor to complete the project and worry that without it, the existing streetcars are doomed to a lifetime of low ridership and low revenue. Some even say the city should abandon the existing lines if the mayor doesn’t follow through and build the project.

In response to a request for an interview this week, the Mayor’s Office provided a statement saying no decision had been made. But in an interview with KUOW last week, Durkan cast doubt on high ridership projections and said, “We’re in a time where we have a housing crisis. We have a number of other really important transit projects online such as Sound Transit 3. … At the end of the day we have a limited amount of money to spend.”

If the project gets built, KPMG estimates it will cost $252 million, more than $100 million more than the Seattle Department of Transportation first estimated in 2015. The jump is in part due to the rising cost of construction materials and labor in Seattle – and the longer the project is delayed, the higher it will likely cost to build. It’s worth noting that more than $70 million of that projected construction cost is for Seattle Public Utilities and Seattle City Light work happening concurrently.

KPMG projected that the streetcar would draw a lot of riders, quadrupling the current combined ridership of the First Hill and South Lake Union lines. The consultant’s report estimates that with the addition of the Center City line, Seattle’s streetcar network would get about 5 to 6 million rides annually. Combined, the existing lines get about 1.5 million rides a year.

If the mayor does kill the connector project, it’s arguable that Seattle should think about winding down the other ones and taking them off the street.”
— Jon Orcutt, TransitCenter

That boost in ridership and the fares they pay will help offset operating costs. KPMG reports the system could collect $8.7 to $10.2 million a year in fare revenue, almost four to five times more than existing streetcars currently collect.

If built, the proposed streetcar would help provide transportation from Chinatown/International District through Pioneer Square, Pike Place Market and South Lake Union. “It will likely get rides from people who will not otherwise take public transit,” said Katie Wilson, general secretary of Seattle’s Transit Riders Union, which recently endorsed completing the Center City streetcar. “If you’re going to put a streetcar anywhere that is the place.”

Abandoning the project comes with costs as well. There are the sunk construction costs – about $52 to $55 million, according to KPMG. There’s the question of what will happen with the 10 new streetcars the city purchased for $52 million. Manufacturer CAF did not respond to a request for interview. SDOT directed the question to the Mayor’s Office, which did not provide an answer.

If the Center City streetcar project is cancelled, the two existing, underperforming lines will continue to operate costing the city about $10 million a year.

“If the mayor does kill the connector project, it’s arguable that Seattle should think about winding down the other ones and taking them off the street,” said TransitCenter’s Orcutt. “They’re super low-performing things you’ll have to pay a lot to operate. The new line is kind of make or break for streetcars in Seattle.”

But there’s also the less tangible, but nonetheless impactful consequences.

“I think we’re at the point where the mayor needs to think carefully about how to handle the streetcar issue in a way that can repair trust [about Seattle transportation projects] rather than destroy it further,” said Wilson of Transit Riders Union. “People feel like promises were made and I think there’s definitely a cost in public and organizational trust if the project doesn’t get built.”

Some people also worry that abandoning the streetcar project now could damage Seattle’s relationship with the Federal Transit Administration (FTA). If the Center City project is completed, Seattle will get a $75 million FTA grant. If the project doesn’t happen, the city could not use the funds for something else.

The city’s director of intergovernmental relations wrote a memo cautioning that, “Withdrawing support [for the streetcar] at this point could damage the city’s credibility with the Federal Transit Administration.” The Seattle Times first reported on the memo in June. Other advocates, including the Downtown Seattle Association, have argued the same point. SDOT and Sound Transit are both relying on the federal government to fund significant portions of future projects including the Madison Street bus rapid transit project and the Sound Transit 3 light rail expansion.

When asked about what would happen if Seattle did not complete the streetcar, an FTA spokesperson said it could not speculate and that, “every project is unique and must be considered on its own merits.”

National transit advocates are skeptical of the claim. “There’s no precedent that I know of a local community pulling back on a transit project for whatever reason, then applying for an FTA grant the next year and having the FTA say they’d hurt their chances,” said Transportation for America communications director Steve Davis.

Davis said the far greater concern is whether there’s any future federal funding coming down the line at all because the current administration has made transit a low priority for funding. According to Transportation for America, the FTA is dragging its feet on disbursing nearly $1.4 billion in grants for local transit projects.

In the meantime, the downtown streetcar project remains stalled with no firm timeline for a final decision to be made. “In the coming weeks,” read the statement from the Mayor’s Office, “Mayor Durkan will continue to seek public and stakeholder input on the opportunities and challenges moving forward and evaluate budget options.”