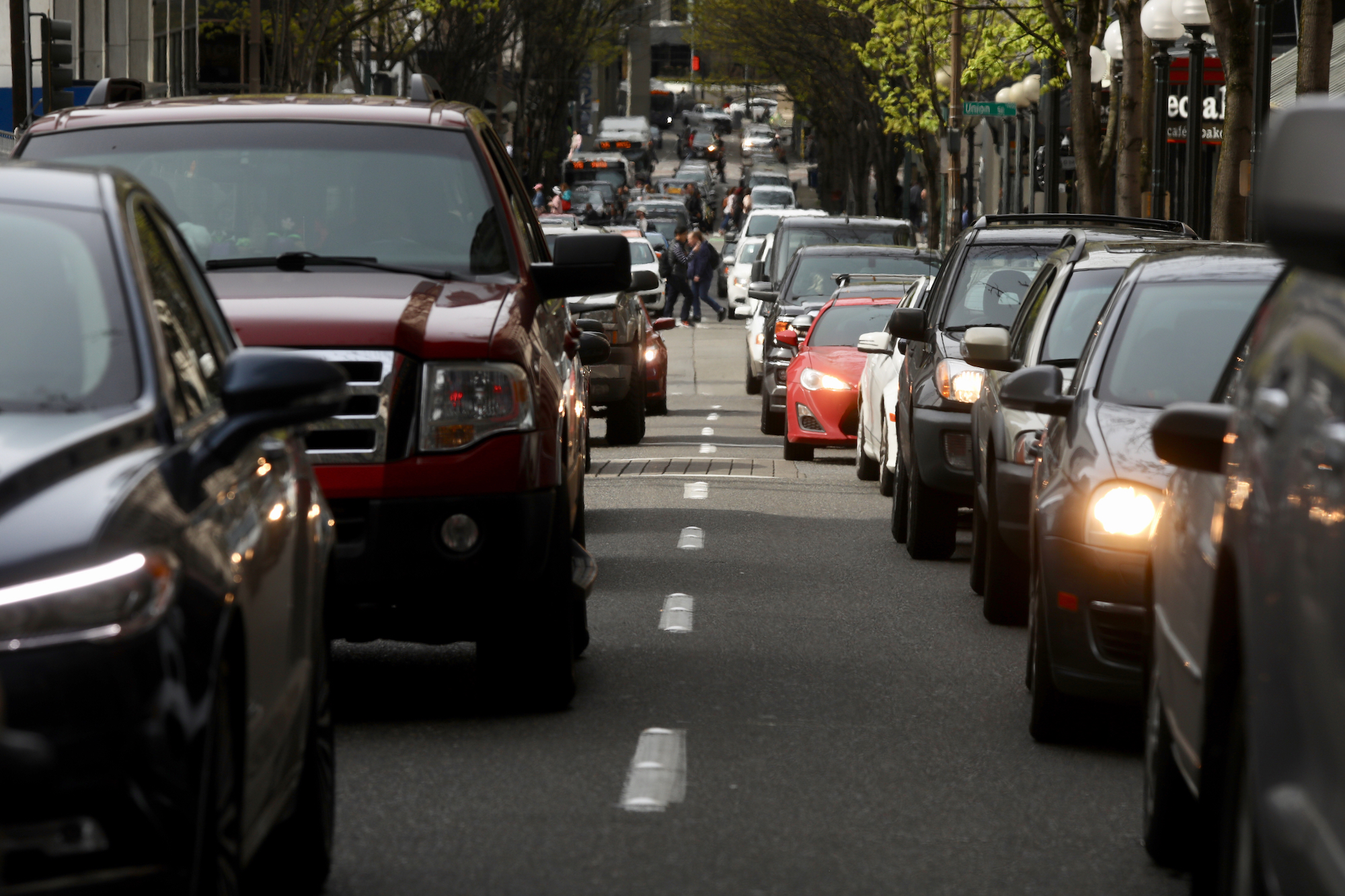 In 1963, a new four-lane bridge (two in each direction) across Lake Washington opened, costing just under $200 million in today’s dollars. Known popularly, if not officially, as “520,” it featured a tollgate on the east side of the bridge collecting one-way tolls of up to 35 cents to pay off the costs. When that happened in 1979, the tollgates were removed.

Today we have a new 520 bridge. It also carries two lanes in each direction for most vehicles, plus another lane for buses and carpools. Tolls range from $1.25 in the middle of the night to $4.30 during the misnamed rush hour (the charges are 50 percent higher without a Good to Go Pass). But these tolls will likely last forever and still cover only about a third of the bridge’s $5 billion price tag — 25 times more than it cost (in today’s dollars) to build the earlier 520. Net gain to the region? One restricted lane for buses and carpools, and more room for bicycles and walkers.

Before we get to the costs of a proposed initiative to impose carbon fees, let’s consider a few more examples of what we are getting for our money these days here.

The story about the new Highway 99 waterfront tunnel is somewhat similar to the Lake Washington bridge, except that the replacement to Alaskan Way Viaduct will actually carry a third less capacity than the route built in the early ’50s and be far less convenient for downtown commuters because it won’t have mid-town exits.

Virtually every transportation project — roads, buses, street cars and other mass transit — ends up spending dramatically more money for less and less return. Sound Transit 3 will cost north of $50 billion in new taxes. When completely built throughout King, Pierce and Snohomish counties, it will reduce regional traffic congestion by — not one bit. Its own supporters acknowledged as much during the campaign, though they hastened to add that things would get even worse without it. So that’s $50 billion, 62 miles more miles of light rail, expanded bus and commuter train service — and nothing gets better.

The vanishing concept of value extends well beyond transportation to virtually every area of government. Education? Thanks to some prodding from the state Supreme Court, the Legislature increased state spending on education from less than $13 billion to $22.6 billion in eight short years — a 75 percent increase (and four times higher than inflation). Education from kindergarten through high school now commands a larger share of the state budget than any time in the last 35 years.

What’s the return on that investment? Test scores released last month by the state Superintendent of Public Instruction’s office school show year-to-year results in math, science and reading to be flat. Graduation rates are ticking upward, but slowly. Schools are getting more expensive but not better. So what’s the solution? Superintendent Chris Reykdal, a former Democratic legislator from Olympia, suggests spending even more money from a new tax on investment income.

Because of technology and competition, people today spend far less of their income on food and clothing than they did 50 years ago. The computer in your smartphone is many time more powerful and far less expensive than what you paid 25 years ago for a clunky desktop. But we’re not seeing that same trend in the public sector.  The concept of value — getting a better return for what you’re spending — doesn’t seem to matter anymore.

Initiative 1631, the “pollution fee” ballot measure, requires a $15 per metric ton tax on carbon dioxide emissions, and automatically escalates $2 every year until at least 2035. The “pollution fee,” which the state would treat as a tax, would be reflected in an immediate 14 cent increase in gasoline (none of the money could be used for road building or maintenance), rising to 55 cents (on top of the existing gas tax) by 2035.  So, what would all this new revenue — over $230 million in year one, rising to $672 million a decade later — actually buy the public?

Well, the professed goal is winning the war against global warming. During his state of the state address last January, Gov. Jay Inslee was unequivocal:  “It is the destiny of this State — because of who we are — to defeat climate change.”

So, does I-1631 actually help “defeat climate change”? No, not in any direct sense, although its supporters argue that it could help build a cleaner energy economy. Does it have any measurable impact on climate change at all? The scientifically honest answer is: No.

During the legislative session when Gov. Inslee floated the carbon tax idea, its claims were measured against a model developed by the Environmental Protection Agency. It used the generous assumption that Washington’s tax would reduce its GHG (greenhouse gas) emissions to zero. If that happened immediately — and it never will – a scholar at the American Enterprise Institute wrote that Washington’s carbon tax would reduce global temperatures by an estimated 2/1000 of one degree  —by 2100.

Two one-thousandths of one degree 81 years from now — if our carbon emissions were zero.

So why raise taxes so dramatically to do this? The governor, in a nifty pivot, says the initiative will also usher in the growth of what he has envisioned as the “clean energy economy.” In other words, the money generated by the tax would likely be used to financially underwrite various solar, wind and biofuel programs that can’t attract investors or forecast a profit.

OK. But how much carbon does our state emit that might make this expensive new program a worthwhile trade-off?

The answer, according to World Atlas, is that we’re already among the 10 lowest carbon producing states in America, particularly when it comes to energy (thank you, Grand Coulee Dam). Washington is already doing more than its share to hold down carbon emissions.

This is looking more and more like a very expensive vanity project for someone who apparently wants to run for president as the green candidate within the blue party, while generating hundreds of millions of dollars for a new 15-member board to spend. How do you get on the board? You’re appointed by the governor.

It would be nice if the initiative required that none of the appointees could be donors to the governor, but it doesn’t. The initiative also has no provisions to prevent the board granting money to the organizations from which board members come — amazing that such an obvious conflict written into the initiative isn’t getting more media scrutiny. Nor is the board required to spend money on proven (if not politically alluring) ways to bring down carbon emissions. The state’s most noted climate scientist, Cliff Mass, from the UW, has written in detail about this. Trigger warning: Professor Mass understands both policy and politics and is unsparing in his dissection of the initiative.

So, in terms of value, by the governor’s own words about “defeating climate change,” does little more than allow us to say that “we’re doing something to fight climate change.” A hollow slogan, but not a cheap one.