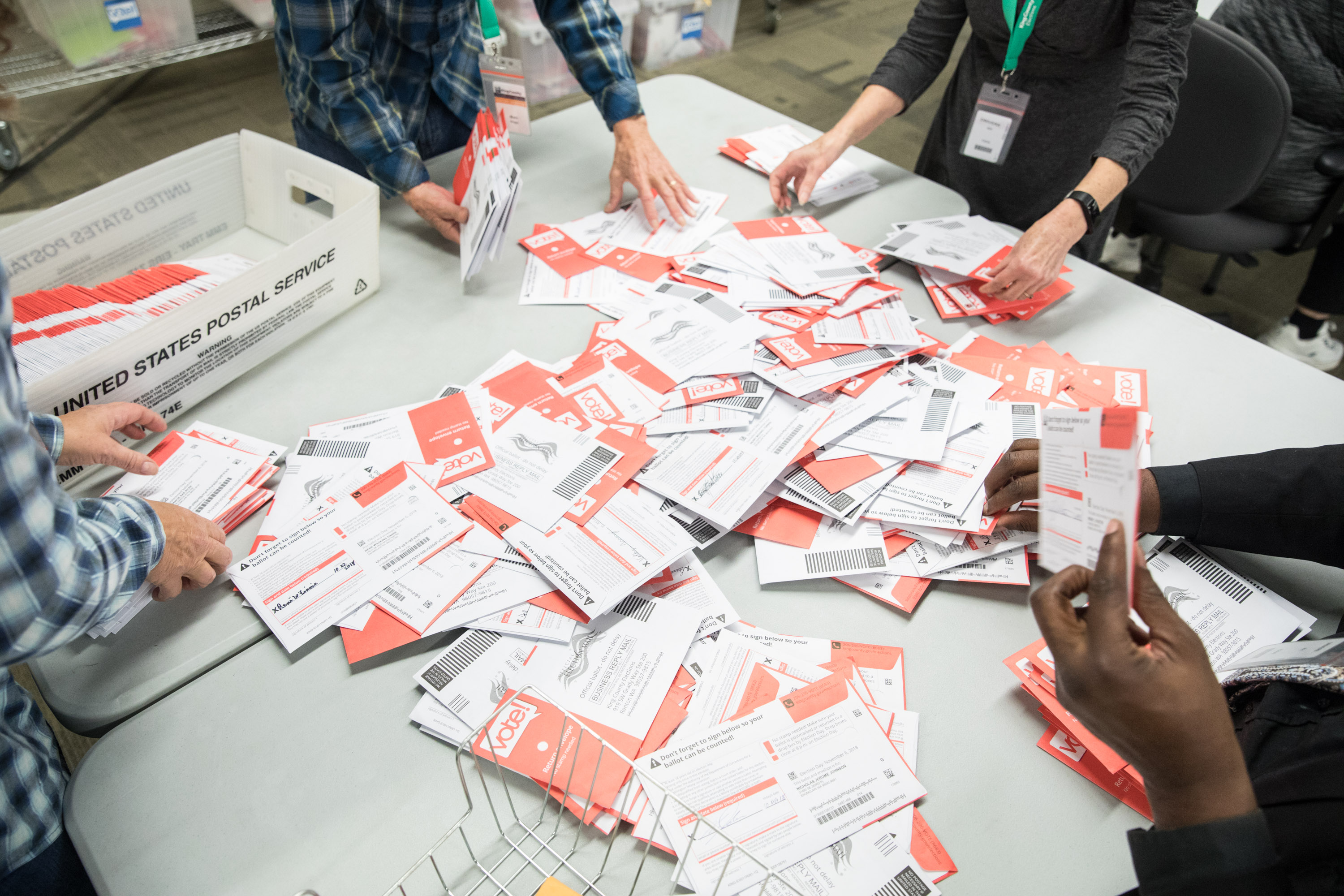 As The Seattle Times Editorial Board rolled out its endorsements for the Nov. 6 midterm election, critics did what they do every year: lambaste the city’s paper of record over a number of its picks. One particular endorsement that infuriated Seattleites was the paper's endorsement in the race for the hotly contested 8th Congressional District. Citing him as “a pragmatic lawmaker with a record of working across the aisle,” the paper chose Republican Dino Rossi over Democrat Kim Schrier.

It's not necessarily anything new to have the Times Editorial Board challenge the Seattle region's dominant political narrative. But that doesn't mean it works in the candidate's favor, or sways an initiative vote. In Crosscut’s election newsletter, we looked back at three years of races where The Seattle Times has angered voters with its endorsements to see what kind of impact it had. We found that when the board has gone against the grain, it doesn’t seem to have had much impact — or at least not enough to turn the race.

Out of 10 unorthodox endorsements, every candidate or initiative the Times Editorial Board didn’t endorse won by at least 10 percentage points. Why? Crosscut talked to a couple political analysts and a former journalism professor about the public’s complicated relationship with newspaper endorsements and whether they have been rendered obsolete.

Mike Henderson, taught editorial and opinion writing at UW for more than 20 years

On public perception of endorsements: I always used to start my classes asking students if anyone could tell me where editorials come from at major metro papers and never once did a student have the correct answer. It’s the collective opinion of members of the editorial board and really always has been. Knowing that in any given editorial board, some members might be more equal than others. I mean if Frank Blethen (Publisher and CEO of The Seattle Times) insists on endorsing Dino Rossi, then that’s the way it’s going to be even if the other members don’t see it that way. Members in the public don’t know, or likely don’t care where editorials come from.

I just heard in the grocery line the other day someone making reference to the Times endorsing Dino Rossi, well the Times doesn’t endorse Rossi. The Times Editorial Board does. It’s a screwy deal.

On what kind of sway endorsements have: About 20 years ago, a guy named Keith Callow was running for re-election to the state Supreme Court. Every major newspaper and minor paper not only endorsed Callow, but did so with no provisos whatsoever. He was the guy. Even though that was the case, a guy whose last name was Johnson won the election. Later when a local pollster tried to measure what the reason for that might have been, it turned out people voted for Johnson rather than Callow because they liked his name better. Callow was like a hero of jurisprudence in the state for decades and he lost the election because of his last name.

Obviously different people have different reasons for being interested. I think most people may find the endorsements useful to differentiate between candidates and if not pick a winner, pick someone who is least likely to be an egregious pick of some kind. It just depends on what the perspective is and most people are just out there living their lives. They don’t have the time or need to get into the mysteries of how The Seattle Times Editorial Board decides to give an endorsement.

On whether endorsements matter anymore: They have a lot of utility, but are declining in significance. They still matter because it’s an informed group of people doing their best to make a reasonable choice. … You as a reporter play a role in being accountable for facts. An Editorial Board’s job is to be accountable for ideas and that division of labor is essential to journalistic ethics and important for a community to prosper.

In just pure political analysis, endorsements matter the most on an issue campaign, and nonpartisan races. Because of hardening partisanship, if The Seattle Times tells you a member of your party isn’t a good actor, you probably aren’t going to believe that because of tribalism. Sometimes the editorial board steps into a race that is outside of tribal politics and it can add an important intellectual component. That’s where it has the most utility, is in nonpartisan races and issue-based areas.

On why the Times' endorsements haven't changed the outcomes of races: Seattle has a very aggressive political class. You’ll notice a lot of these people started demonizing Seattle Times. Well before Trump criticized the press, Seattle progressives attacked the Times because they didn’t get what they wanted. It was a body that wasn’t for sale and wasn’t part of their political culture they could bully or press. It’s immune to their pressure, so they set it up to attack it in an effort to reduce its credibility.

On whether the Dino Rossi endorsement will matter: Probably not, because of the volume of money involved. It helps some and is always better to have a whisper of help come your way rather than no help at all. … If the Times had endorsed Schrier, the very people who claim it doesn’t matter would be telling you how much it mattered that they endorsed Schrier. Oftentimes this notion that an endorsement doesn’t help or matter is offered by the people who lost the endorsement.

On whether endorsements matter: They do matter. People look at them as a leading indicator, if you’re someone who wants a left-leaning candidate then you have the Stranger, or if you’re someone who wants a centrist, the Times endorsements are a good proxy for that. But with declining newspaper readership and the sheer amount of information available on the internet, I think it’s fair to say that endorsements don’t carry nearly as much weight as they used to, but they still show up when you look at election results, there are still clear indicators they do matter for certain groups.

On those instances where endorsements have sway: Look at the Jon Grant vs. Teresa Mosqueda race: After endorsing Sara Nelson in the primary, they endorsed Grant, who wasn’t the candidate you’d expect them to endorse. Mosqueda was getting the more moderate voters, but after the endorsement you saw a spike in the older, higher income votes for Grant between the primary and general. In Broadmoor, the Republican part of town, Grant got 35 percent of the vote, a spike from the primaries. That endorsement got him a solid voting bloc of older, more moderate homeowners which is kind of The Seattle Times' demographic. [Endorsements] probably have less of an influence on partisan votes because when it’s nonpartisan, people are a little more lost at sea and looking for what a candidate might value that the partisan label provides, and a nonpartisan city council race, for example, doesn’t have that.

On why the Stranger appears to sway more votes than the Times: In the 2012 primary election, the Stranger was mad at both the Democrat and Republican candidates for Lieutenant Governor, so they endorsed a third party candidate who wasn’t a viable candidate. He was very eccentric, but ended up almost winning several precincts of Capitol Hill and Georgetown. Even the Stranger’s sarcastic endorsements can sway as many votes as serious newspapers. That’s because when people look at the Stranger, they kind of know what voting the Stranger’s way is going to accomplish: very progressive, a little anti-establishment and trolly, but they know what they’re getting. Whereas with the Times, it’s a bit more ideologically amorphous, so people are less willing to vote a straight Seattle Times ticket.

On whether The Seattle Times Editorial Board is out of line with Seattle: They’re much more moderate than Seattle, but I don’t think they’re claiming to represent the Seattle electorate, sometimes in their endorsements they’ll specifically say, “This candidate is a good fit for this district.” And they’ll kind of modify their endorsement based on who they think is a good fit for the district, but they’re willing to endorse candidates based on reasons most Seattle voters would disagree with. So out of step, yeah, but I don’t think they’re trying to be on the cutting edge of public opinion when they do their endorsements.

For its part, the Times Editorial Board describes the endorsements as a way for readers to sort through the deluge of advertising for candidates and ballot issues. In a column, Editorial Page Editor Kate Riley said, “The Seattle Times Editorial Board is here to help.” She went on to explain the months of work, starting in May, that went into deciding who to endorse among some 130 candidates and ballot positions.