WDFW biologists spent three winters counting over 5,000 moose by helicopter and GPS. But climate change and wolves are already eating into those numbers. 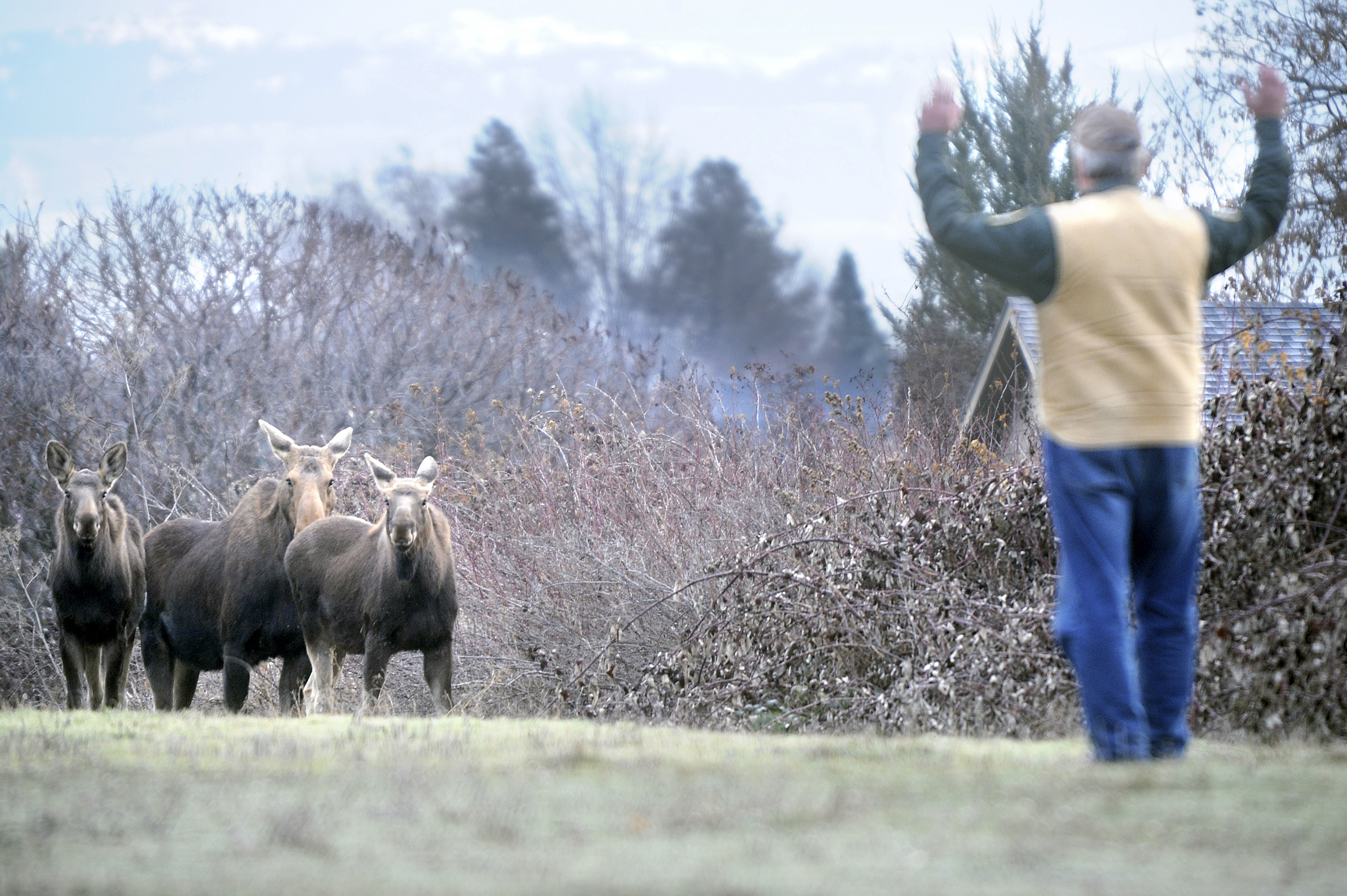 Department of Fish and Wildlife officer Scott Rasley waves his arms in an attempt to keep a mother moose and two calves from heading further west toward a trailer park in Walla Walla, Wash. on Thursday, Feb. 3, 2011. (AP Photo/Walla Walla Union-Bulletin, Matthew B. Zimmerman)

Believe it or not, Washington is moose country: 5,169 of these gangly ungulates roam the state’s wildlands — far more than the previous rough estimate of three thousand or so. Biologists at the Washington Department of Fish and Wildlife (WDFW) arrived at this conclusion this summer, after wrapping a multi-year effort to get the first accurate head count of the state’s population.

Moose are relatively recent arrivals in Washington. There were none until the 1920s, when a few individuals began to wander into the northeastern corner of the state from Idaho, or possibly Canada. By 1977, there were enough around that the state issued three hunting permits; now it issues over a hundred a year. Most of Washington’s moose still live in the Selkirk Mountains in the northeast, but they wander as far south as the Oregon state line and as far west as the North Cascades.

WDFW’s first-ever moose census is a direct result of the success of its primary predator. Questions about the effects of Washington’s growing wolf population — combined with the rising specter of climate change — prompted the state’s biologists to decide in 2013 that a head count was necessary.

There was just one problem: Counting moose — especially in Washington — is really hard. If you’ve ever seen a moose, you might think these massive animals would be impossible to miss. But moose are shy, solitary and tend to live in places where they’re hard to spot. The standard method for moose census-takers involves counting them from helicopters in the winter. In deciduous forests, where the trees drop their leaves, this works fairly well.

“If you’ve got a snowy background, then visibility by air, while imperfect, is good enough that you can employ those tried-and-true methods,” says WDFW biologist Richard Harris.

This technique would work for the odd moose that wanders onto a Walla Walla golf course. But where the majority of them live in northeast Washington, the mountains are covered with hemlock, pine and fir trees, which provide very effective cover all year long.

“Some of the moose habitat is so thick with trees that they’re almost invisible, and so any kind of aerial survey work becomes much more difficult,” says Harris. “Moose don’t form big groups in the winter like elk do, either, so counting them is a one-by-one or two-by-two operation.”

Ultimately biologists spent three winters painstakingly searching by helicopter for glimpses of moose in the thick coniferous forests. They combined this with information gleaned from the movements of individual moose that had been tranquilized and fitted with GPS collars. With the help of some fancy math, they finally arrived at that 5,000-plus figure.

Fall is a critical time for moose. Their annual mating season runs from September to mid-October; after, they begin looking for cool spots to pass the winter, which helps keep their metabolism low and reduces the amount of food they need to fuel their massive bodies. But finding enough food may be getting harder: After decades of steady growth, Washington’s moose population seems to be declining — and climate change is at least as big a threat as hungry wolves.

“Our focus on moose helped us learn that it’s not just predators that are causing problems, it’s parasites as well, and most of the parasites are doing better now than they have in the past because of climate change,” says Harris.

Ticks are a particularly nasty problem for moose: A single moose can accumulate tens of thousands of them, leading to massive weight loss as the animal struggles to replace lost blood. “And so we have moose that are getting eaten, but we also have moose that are starving to death. Climate change is an exacerbation of that problem.”

Washington’s moose join populations in New England and the upper Midwest that are declining for similar reasons. “I think that moose would be declining now even without climate change, because they’ve overshot what the habitat can support,” says Harris. “But when you throw in wolves and climate change, too? It’s a difficult world for moose out there right now.”