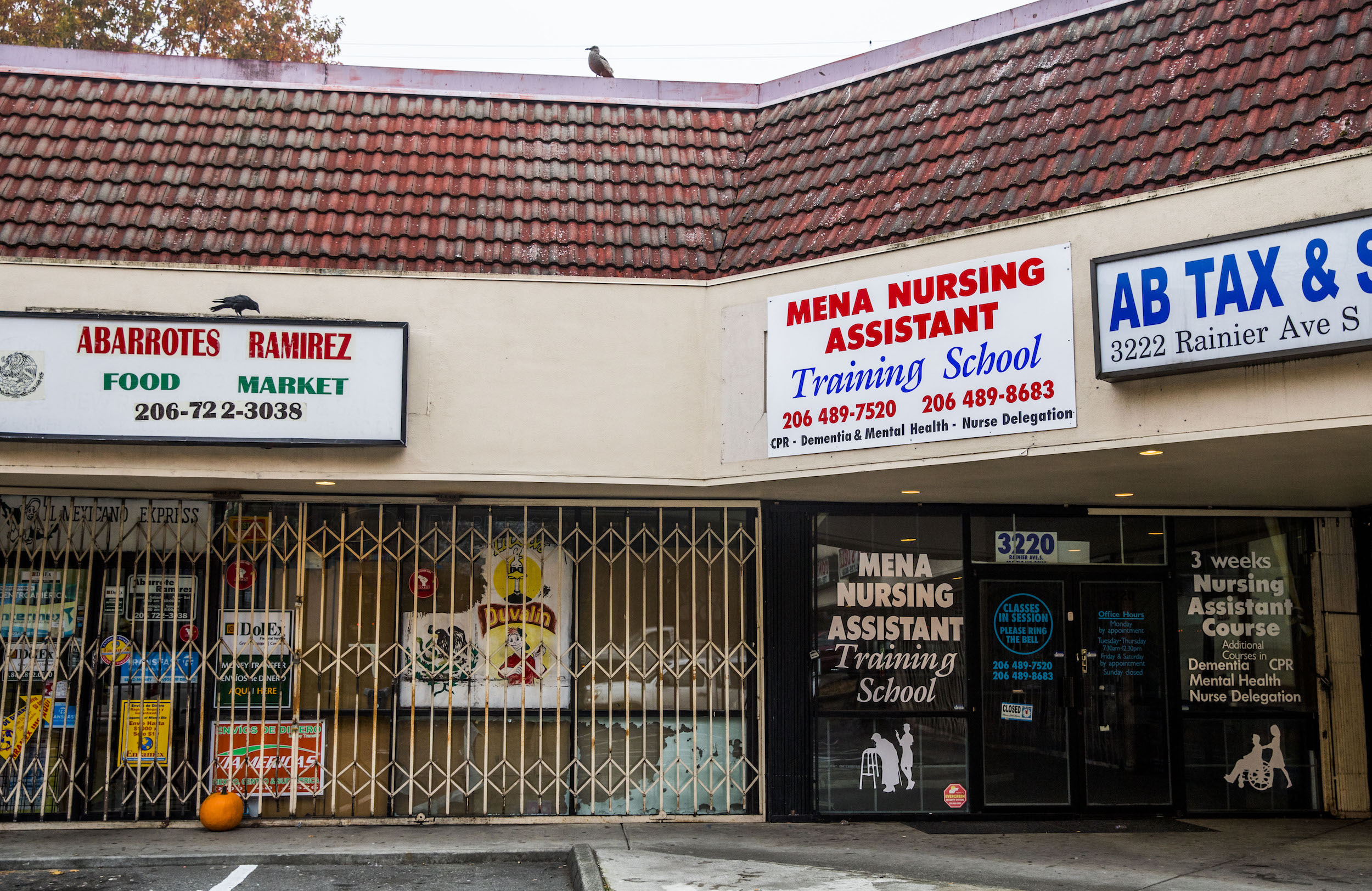 Several months ago, a young Somali immigrant named Fatma walked into a nursing school in Seattle to take an exam. It was the third time that she was taking the test, which is required to become a home care aide in Washington state. And for the third time, she failed.

The 25-year-old mother of three who lives in Rainier Valley now finds herself without a job, her family completely reliant on the $1,500 a month her husband earns as an Uber driver.

But approximately a week after failing the exam, Fatma filed a formal complaint with Prometric, a Delaware-based test development company that works under a $1.8 million contract with the Washington State Department of Health.

Fatma is not fluent in English and, like many other home aide workers taking the test, required a foreign language translation provided by the company. Her complaint: the translation was bad.

With the help of her husband, who speaks fluent English, Fatma wrote: “I couldn’t understand the Somali interpretation. The dialogue that was used in the test was not Somali.”

“Please understand this is not fair and needs to be corrected,” she wrote.

At the time she took the exam, Fatma was already working for Amicable Healthcare, a company based in Seatac that specializes in home care. She helped care for a little boy living with various disabilities, assisting him in daily tasks such as showering and eating.

The home healthcare company paid to have her enroll in a two-week course meant to prepare her for the two-part exam. Fatma passed the first part of the test — the so-called "skills test" — with flying colors. A live interpreter is offered for that part of the exam, which tests candidates on skills such as handwashing and addressing patients. It was the second part of the exam, a computer-based knowledge test, that gave her trouble.

Fatma isn’t the only test-taker who has had issues with the quality of the exam translation. In fact, according to company emails obtained by Crosscut, nurses who serve as proctors for the exam have received numerous complaints, particularly with regard to the Somali translation of the test.

One nurse-proctor, who asked to remain anonymous for this article, brought the translation issue to the attention of the Washington State Department of Health, and Prometric. In July, he was suspended with pay. The following month, he received a warning letter from the company.

On the advice of a lawyer, the nurse forwarded work emails related to discussions about the integrity of the test translations to his personal Gmail account. When Prometric discovered that he had done this, it fired him.

“Your position with the company was terminated for cause effective September 29, 2018,” reads his termination notice. “The decision was made due to your violation of the company’s policies and procedures.”

“Specifically, you sent internal communications and confidential materials outside of the company without prior authorization from management,” it reads.

The home care industry is booming. Due to the number of Baby Boomers entering old age, and treatments that are lengthening lifespans, the industry has become one of the fastest-growing in the U.S.

Nationally, more than 2 million home care aides currently care for the elderly, people with disabilities, and others who need assistance at home. The vast majority of these workers are women and people of color. And they are among the lowest-paid workers in the economy. Nationally, home care aides make approximately $11 per hour, or $23,000 a year, according to the Bureau of Labor Statistics. The combination of low pay, physically intensive work and unpredictable hours has led to a high turnover rate in the field.

More than 42,000 home care aides work in Washington state, where the pay is $15 an hour starting in 2019 for members of the Service Employees International Union. Washington state is also home to some of the toughest requirements for home care aides, thanks to a 2011 ballot initiative sponsored by the SEIU 775 Northwest. Within 200 days of being hired — or 260 days for those with limited English proficiency — home care aides must pass a background check and the certification exam.

As of July, the skills and written tests cost $92 and $45, respectively. First-time test takers pay a total of $137. Because candidates who take the knowledge exam don’t always know how to read and write, the computerized test is accompanied by audio, which gives candidates the option to listen to the questions and choose the best answer. Both the questions displayed on the screen and the accompanying audio are offered in 14 different languages by the Washington State Department of Health, which worked with Prometric to develop the tests.

Responding to concerns about low pass rates among the approximately 15 percent of test takers who don’t speak English, Prometric created the most recent version of the test in 2016. But emails between staff at Prometric obtained by Crosscut show that several proctors have shared concerns about the quality of the revised translations of the test.

In a statement, Julie Graham, a spokeswoman for the Washington Department of Health, said Prometric “followed testing industry standards … to ensure the current exam meets the same rigorous industry standards that are used for other standardized tests, including the SAT, ACT, and GRE.”

The overall pass rate for the knowledge or written exam in all languages is 97.1 percent, Graham said. However, the picture becomes more complicated when looking at the pass rates for exams in various languages. The “Department has noted the 2017 pass rate for Somali was 78.9 percent, and it is 56.6 percent in 2018. However, the Department does not know which of many factors (exam, training, dialect, cultural expectations that may conflict with professional expectations, etc.) may be contributing to the current pass rate,” Graham said.

Graham said they were waiting for a greater number of Somalis to take the test before having the data needed to complete a more thorough analysis of the exam, possibly in November.

The home aide test is also translated into other languages, including Korean, Laotian, Ukranian, Khmer, Tagalog, Arabic and Samoan.

Stacey Saunders, program manager of home care aides with the Washington State Department of Health, said the cost of developing a new exam in a specific language would be more than $50,000. She emphasized the department was waiting on taking any drastic measures because she wants to ensure the root cause of any problems with an exam is uncovered before it is revised. Saunders said the department wants as many home health aides to pass as possible while maintaining adequate training for workers.

“It is not plain to us that there is an issue with the exam. If there was, we would have taken action,” she said.

A medical interpreter who has assisted test-takers with the first part of the exam, but asked to remain anonymous for fear of losing the job, confirmed that many students complain about the quality of the Somali translation of the test.

Another home care aide, 44-year-old Warsen Ahmed, who managed to pass the test on the second try in September, said the pronunciation of the Somali text for the audio component of the exam is difficult to understand.

“This type of translation is absolutely not understandable,” said the husband of another candidate who asked not to be named. He called the process “very unfair” and said his wife had already failed the test twice.

In response to questions, Prometric said “it is not our practice to publicly release information about employee relations or confidential client-owned data.”

But in an August 24 warning letter to the proctor who was eventually terminated, Allison M. Mulford, associate general counsel for Prometric, defended the company’s tests.

“We perform a standard-setting on every exam that we develop in order to ensure that the exam does not inadvertently favor, or discriminate against, a specific population of individuals over another,” she wrote in the letter, which was marked confidential and obtained by Crosscut.

The letter goes on to note that they had native-speaking Somalis in the home health profession “double-check the translated exams for issues with dialect, conversion of terms, and any other issues that were immediately apparent.”

Mulford points out lower pass rates could be attributed to “literacy rates among native speakers and their proficiency with technology.”

“We do not own the content for this exam, we do not own the budget related to this exam, and we certainly do not get to make any final determinations,” the letter concludes, referring to the Washington State Department of Health.

The letter also warns the nurse that this is “a final notice to you to cease and desist from any further compilation of data, documents or materials related to this issue.”

In an email, Mulford also questioned whether the nurse would be able to “put your personal opinions, beliefs and misperceptions aside to objectively, independently and fairly proctor the Somali HHA exam,” even though company emails show that his direct manager had encouraged him to find out more about the pass rates and any translation issues.

The company also chastised the nurse for seeking information directly from the Washington State Department of Health, such as exam pass rates, without permission.

In a statement on Thursday, SEIU Secretary-Treasurer Adam Glickman said “It has frankly been a pretty frustrating several years of pushing the Department of Health and Prometric to be responsive to the diverse language needs of the home care aide workforce."

The Washington State Department of Health has "recently demonstrated more urgency around this issue and some progress has been made, but there is clearly more work to do," Glickman said. "There is a real need to recruit and train a diverse group of caregivers who can provide linguistically and culturally competent care."

“The allegation that Prometric fired a proctor because they raised concerns to the Department of Health about language access is especially concerning."

Fatma, for her part, is weighing whether it is worth paying the approximately $400 to take the 75-hour prep course again.

This article was updated to note home care aide workers who are members of the Service Employees International Union will make $15 an hour starting in 2019. The nurse who Prometric fired was initially suspended with pay.