Anita Khandelwal's stance on the contentious issue had previous cast doubt on the interim-director's chances of getting the job. 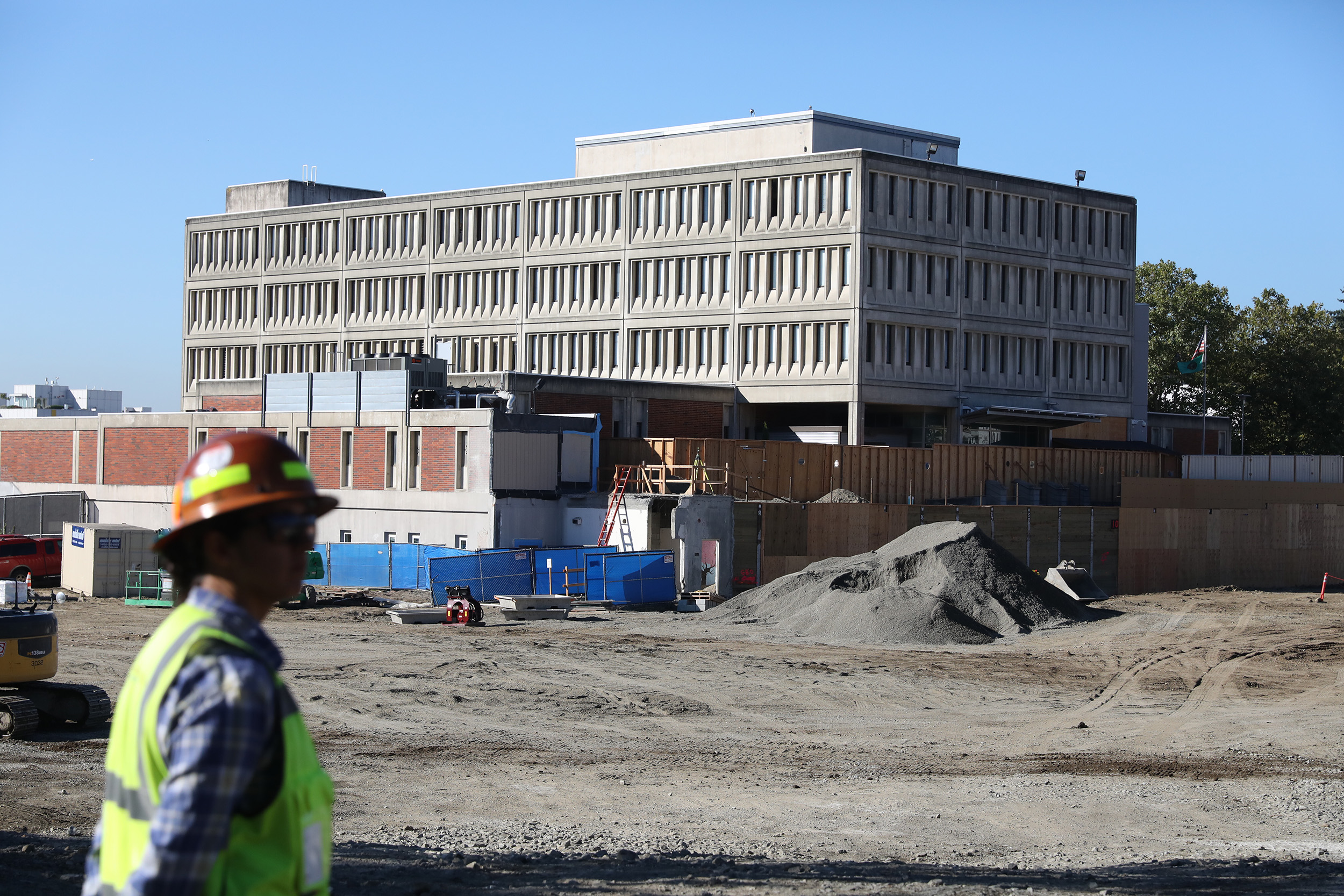 A construction worker at the site of the new Children and Family Justice Center in Seattle, Sept. 27, 2017. (Photo by Matt M. McKnight/Crosscut)

Following a dramatic summer, King County Executive Dow Constantine has nominated Anita Khandelwal to be the permanent Director of King County’s Department of Public Defense (DPD) to lead the 400 employee department that provides legal defense in King County and Seattle. Khandelwal has served as the interim-director of the relatively new department since June and was one of three finalists for the job.

Constantine’s decision comes despite some pushback that Khandelwal had received from county officials for her outspoken opposition to the county’s own Children and Family Justice Center — known to many as the “youth jail” — which is currently under construction.

Specifically, Khandelwal signed off on a statement of opposition to the facility from a group calling itself the “People’s Moratorium,” adding DPD to a list of around 150 other organizations seeking to disrupt the construction of the $210 million facility.

Her signature raised the hackles of county officials, who felt blindsided by her public stance. Councilmember Dave Upthegrove cancelled a meeting he’d scheduled with Khandelwal in response, calling her opposition a “stunt” and telling Crosscut he would not vote to confirm her if nominated.

Additionally, Khandelwal said she’d learned that Constantine and King County Prosecuting Attorney Dan Satterberg had remarked that her opposition to the facility would lose her the job. Both Constantine and Satterberg denied making those statements.

Reports of the comments set off concerns about the independence of the department. In a letter sent to Upthegrove following the publication of Crosscut’s story, chair of the Public Defense Advisory Board Paul Holland said he wanted to express “concern” regarding Upthegrove’s statements that he would not confirm her.

“Defenders — and especially their leaders — must be able to speak out strongly even when their position runs contrary to those taken by other county officials,” he said.

In an email Wednesday, Upthegrove softened his stance, although he did not promise his vote. “I was surprised and angry with her poor communication with the council on that high-profile issue,” he said. “I’ve calmed down since then and am going to assess through the confirmation process her commitment to and strategies for improved communication with the County Council before deciding how I will vote.”

Even as she faced backlash from some county officials, Khandelwal enjoyed broad support from members of the department, many singing her praises in a separate August meeting. Councilmember Rod Dembowski, who supports Khandelwal, said Wednesday that he watched as she received a standing ovation from hundreds of public defenders during a recent downtown conference.

“I think we have to remember that she is doing her job and the job that the voters asked for the Department of Public Defense to do … which is to advance reforms in the criminal justice system,” he said.

The Department of Public Defense was created in 2013, following a Washington Supreme Court decision that members of four separate nonprofit public defense agencies could join the state's retirement system. In response, the County elected to bring public defense in house and move away from the contract-based approach that pre-dated 2013.

The restructure raised concerns over the independence of the public defenders. In response, officials established the Public Defense Advisory Board and drafted a charter promising that independence. Khandelwal’s opposition to the justice center, however, was the first real test of that charter.

If confirmed, Khandelwal will be only the second permanent director of DPD. Constantine decided not to re-nominate her predecessor, Lorinda Youngcourt, to a second term. Among the complaints about Youngcourt from staff and the advisory board: She did not take firm stances on broad criminal justice issues.

In a statement, Constantine called Khandelwal “the best candidate to lead the Department of Public Defense and the challenging and important work it does every day. I listened to employees and stakeholders who wanted a change at Public Defense, and I am convinced Anita can best fulfill its mission to serve some of the most vulnerable people in our region — people who are personally affected by institutional racism, poverty, mental illness, and marginalization.”

Khandelwal said in her own statement, “I’m excited at the prospect of supporting DPD staff in providing high-quality representation and collaborating with the community and other leaders in advocating for a more just and equitable criminal legal system.”

Dembowski said the first confirmation hearing could come as early as Oct. 15, but might be pushed back to Oct. 29. He said it would be “highly unusual” for the Council to not confirm an Executive’s nominee.