Can a $2.5B budget help King County reimagine transit? 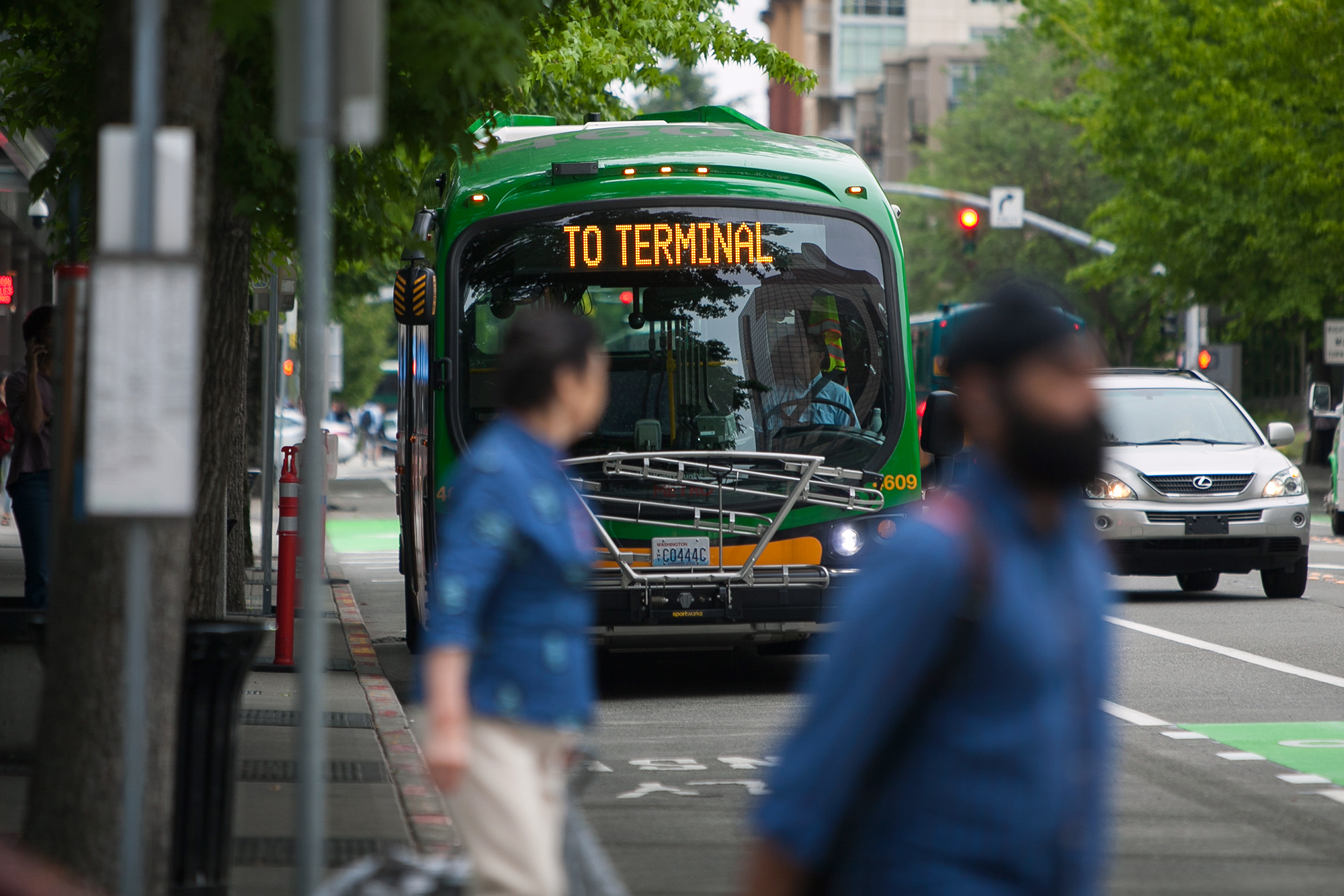 King County leaders are dreaming of a future where almost every suburban resident has easy access to public transit. But that dream faces a stubborn reality — Seattle and its nearly 100,000 in-city transit commuters demand most of the growth.

The King County Council recently approved a budget that will boost Metro bus services countywide. The move comes as funding for Metro reaches a critical juncture; a city of Seattle sales and car tab tax for transit is set to expire in 2020. County leaders must also address service for low-income riders while planning a mass transit system that integrates private buses, ride-hailing services like Lyft and Uber, and, eventually, self-driving cars.

About $2.5 billion of the $11.7 billion 2019-2020 King County budget is dedicated to transit. Much of that money maintains existing Metro operations, but the budget, passed unanimously by the council in mid-November, funds a 5 percent increase in daily bus service (about 200,000 additional service hours in budgetspeak), and creates a new program for very low-income riders.

The region’s population boom has increased demand for bus and rail service. Sound Transit and Metro are among the only transit agencies in the United States that have seen ridership growth in recent years. Metro has been increasing bus service to meet that demand. King County Executive Dow Constantine proposed adding a 4.5 percent increase in bus services countywide. In keeping with past practices, Seattle would receive the lion’s share of that increase. The council put forward a slightly larger increase with the stipulation it "must contribute to geographic value within the system," a nonbinding nudge meant to direct the extra service outside of Seattle.

Seattle gets the bulk of the service increase in part because it has the most riders. But the city is also able to buy more busing than its neighbors because it has a dedicated funding source in the Seattle Transportation Benefits District (STBD), a levy approved by voters in 2014.

“I have a great deal of appreciation that Seattle raises money from its own jurisdiction to pay for bus service,” Councilmember Claudia Balducci said. “But it creates a two-tiered system.”

Balducci used the budget to nudge her council colleagues and Constantine to start developing a new regional funding source for transit. Metro currently relies on sales taxes for about half of its funding, with fares, grants and other sources making up the rest. It is not enough to fund the long-range expansion laid out in the 2040 Metro Connects plan, which sets lofty goals such as ensuring that 73 percent of residents in the county will live within a half mile of frequent transit service. To get there, Metro will need to increase bus service by 70 percent over 25 years.

Seattle supplements bus service within city limits with money from STBD, but that levy is set to end in 2020. Balducci and others are interested in working with Seattle and other cities to potentially run a countywide ballot measure for a new transportation levy, or, barring that, figure out some yet-to-be-determined alternative fund.

“If we want to have a regional funding source that might replace STBD, we need to plan it now," Balducci said. "We needed to plan it yesterday. I’m asking, is there a way for us collectively in the city and county to agree on a path forward?”

“We’re super supportive of the county and Seattle having those conversations,” said Hester Serebrin, policy director at pro-transit advocacy group Transportation Choices Coalition. “It’s about figuring out a way to both meet the really high demand in Seattle and meet the demand happening all over the county.”

Some elected officials in Seattle might be less enthusiastic to try a regional approach again. Seattle City Councilmember Mike O’Brien has voiced support for a regional funding plan, but the last attempt at such a plan failed. In April 2014, a countywide ballot measure to fund road and transit projects with an increase in sales tax and car tab fees lost 54-46. Seattle rushed to put STBD to voters that November; it won with 62 percent of the vote.

Metro’s new low-income fare program was developed after an April 2018 audit of agency fare enforcement policies found low-income and homeless riders received a disproportionate number of tickets for not paying fares. That led to new procedures, including options for paying off tickets with community service and an effort to enroll low-income riders in the existing ORCA Lift program instead of issuing tickets.

But Transportation Choices Coalition’s Serebrin said the audit also highlighted a need for even lower-priced fares for some riders.

“It’s pretty clear that there’s a group of people riding the bus who are low or no income who cannot pay for the bus, even with ORCA Lift. … If we can avoid someone getting a citation, that’s better than fixing the process that comes after the citation,” Serebrin said.

ORCA Lift provides half-priced fares to people earning double the federal poverty level or less — currently a monthly income of $2,023 or less for an individual. The 2019-2020 budget funds a new program by 2020 with an even lower tier of fares than Lift for Metro’s lowest-income riders.

“ORCA Lift has been a big success,” Balducci said. “We’re very proud of how it’s opened the door to people who otherwise may not be able to ride transit. This budget process really moves to implement a more tiered fare to make sure [transit] is reaching all the people it needs to reach.”

There are lots of question marks about the future of transportation, with companies such as Uber and Lyft continuing to grow, new transportation options such as bike and scooter sharing and self-driving vehicles somewhere on the horizon.

To that end, the council directed Metro to create a framework for partnerships between transit agencies and private transportation companies. The ideal outcome for King County is that frequent bus and rail transit serve as the spine of the transportation system while private companies supplement that service and move people from transit stops to their destinations. The feared alternative is a future where private companies have cannibalized transit ridership and clogged the streets.

“If you just let the market do what it chooses to do,” Balducci said, “they’re going to compete with transit, serve the places they can make the most money and we’ll have a system we don’t like that much.”

Correction: An earlier version of this article referred to the Seattle Transportation Benefit District as a property tax. It is a sales and car tab tax.