Up by 6 points, the Eastside doctor stopped short of declaring victory. 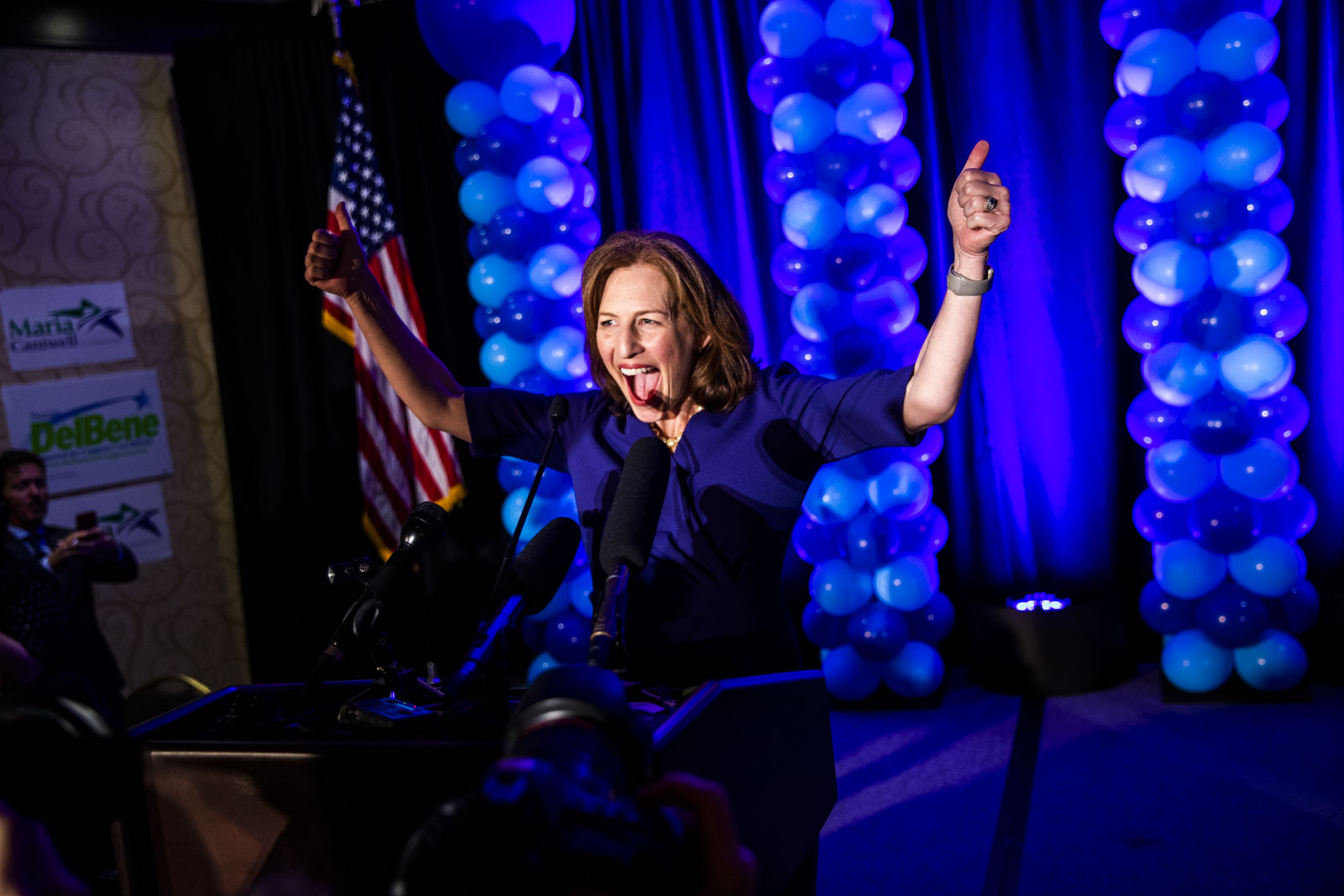 Democratic congressional candidate Dr. Kim Schrier celebrates with the crowd as she maintains the lead during the democratic results reception at the Hilton Bellevue in Bellevue, Wash. on Tuesday, Nov. 6, 2018. (Photo by Dorothy Edwards/Crosscut)

In Washington’s most anticipated congressional race, Democrat Kim Schrier finished election night with a 6-point lead over Republican Dino Rossi in the race for the 8th District. With a heap of ballots yet to be counted under Washington’s vote-by-mail system, Schrier stopped just short of declaring victory, but sounded optimistic. “Votes are still being counted, but things are looking good,” she said. “Really, really good."

At the state GOP’s election night party in Issaquah, meanwhile, Rossi did not concede while briefly addressing the crowd. “You never have an election night but an election week,” Rossi said, referring to the votes yet to be tallied. “It’s too early to call, but we’re optimistic.”

“I slept really well last night because, you know what, I gave it everything I have,” he added.

The 8th was widely seen as among the key districts that Democrats would need to take to gain control of the U.S. House of Representatives, but fell out of that narrative just moments prior to the ballot drop. Regardless of whether the Democrats’ night amounts to a “wave” or not, the party secured enough House seats early in the evening for numerous networks to declare that it had succeeded in taking the House, even before West Coast polls had closed.

Despite the race falling out of the national limelight, Schrier and her supporters were nonetheless elated at her early lead. “This is giving me so much hope for the future,” said Schrier. “This is not part of what I was going to say, but I can tell you from the bottom of my heart I feel so hopeful and energized.”

In the frenetic race for control of the U.S. House of Representatives, Washington’s 8th Congressional District shared center stage with the country’s most highly watched contests. And for good reason: The district has stubbornly split its vote between the Democratic presidential nominee and a Republican congressperson since the early ‘90s. The most recent presidential race was no exception, as the district swung for Hillary Clinton while re-electing Republican Rep. Dave Reichert.

When Reichert retired after seven terms, Democrats saw an opportunity to bridge the divided vote once and for all, and the district became a piece in their national strategy to take the House. The spending doors were blown open, and it quickly became the most expensive congressional race in Washington State history and the second most expensive in the country this cycle. By early this week, nearly $30 million had been sunk into the race, with nearly $20 million coming from outside groups.

The 8th can be counted among the districts with heavy suburban representation where voters may have voted Republican in the past but who appear to have reservations about Donald Trump.

But that’s not the full story of the 8th. While it catches large portions of Pierce and King counties, it also leaps the Cascade Range into more conservative Eastern Washington.

Both Rossi and Schrier followed standard roadmaps for their respective parties.

Schrier, a pediatrician, became a first-time candidate for political office because of Reichert’s vote against the Affordable Care Act. She continued to run on health care, an issue Democrats broadly have used to their advantage during this election cycle. She received enormous support from the House Majority PAC, a national organization with ties to House Minority Leader Nancy Pelosi.

Speaking after the results trickled in, Schrier took on the posture of a victor, saying she wanted to fight for affordable health care, raises for the middle class and women’s rights. “And, finally, I am in this to put some checks and balances on this administration,” she said.

“I promise I will fight for you everyday and the values we all share in the 8th District,” she added.

While Schrier came in as an unknown, Rossi had the name recognition of an incumbent. A former state legislator and three-time candidate for statewide office, he ran as a free-market Republican. He touted his backstory of success in real-estate and scorned Schrier’s support for a public health insurance option as a government takeover.

“I really believed I had something to offer,” Rossi said Tuesday. “We need people who can actually bring people together. That’s why I decided to run for office.

“It really is about trying to make people's lives better.”

During the campaign, neither candidate ventured too far from the more moderate tendencies of their parties. Rossi repeatedly pledged he would work across the aisle and Schrier avoided talk of abolishing U.S. Immigration and Customs Enforcement. At the same time, each characterised the other in extremes: Schrier reminding voters that Rossi voted for Trump as a delegate, and Rossi casting Schrier as a member of the angry “resistance.”

What limited polling was done on the race showed an extremely close contest throughout the campaign. Rossi saw a brief bump in support after the confirmation of Supreme Court Justice Brett Kavanaugh, as did Republicans more broadly. But Schrier closed as election day neared.

At Democratic headquarters in the Bellevue Hilton, early nervousness gave way to a partying spirit as Democrats across the country did well in congressional races, never mind their losses in the Senate.

Evangeline Anderson, 92, was among the onlookers. “I believe that the President of the United States is a fascist and he’s taking us toward fascism," she said. "And I’m part of the resistance to make sure that doesn’t happen. I don’t want to die and leave my great-grandsons, one of whom is half African American, in that kind of hands.”

At the Republican headquarters at the Hilton Garden Inn in Issaquah, supporters snacked and drank as they watched Fox News on two large TV screens. They clapped every time a TV announcer pointed to a Republican win, including Sen. Ted Cruz’s victory in Texas. In one of the tightest midterm races in the country, Cruz defeated one of the most popular Democrats to run in Texas in years — Rep. Beto O’Rourke.

Several supporters wore Trump’s signature “Make America Great Again” hat, including John Wayne Lee, 37, an immigrant from Korea. He said he had once been a Democrat but switched to the Republican Party because “I don’t like socialism, and I don’t like gun control.”

“I don’t like the government telling me how to live my life,” Lee said. “I stand with Trump on everything. I don’t like career politicians.”

Lee said he supported Rossi over Schrier because he disagreed with her views on universal healthcare and immigration.

Because of Washington’s vote-by-mail system, results of the race will warp with each new count and the race could tighten. But that didn’t stop Schrier from declaring, “In the end, I believe we will have a woman doctor in the House.”