Could Washington state be the next AI frontier?

As the state Legislature contemplates how it can help the emerging industry, the University of Washington lays the groundwork for a future workforce. 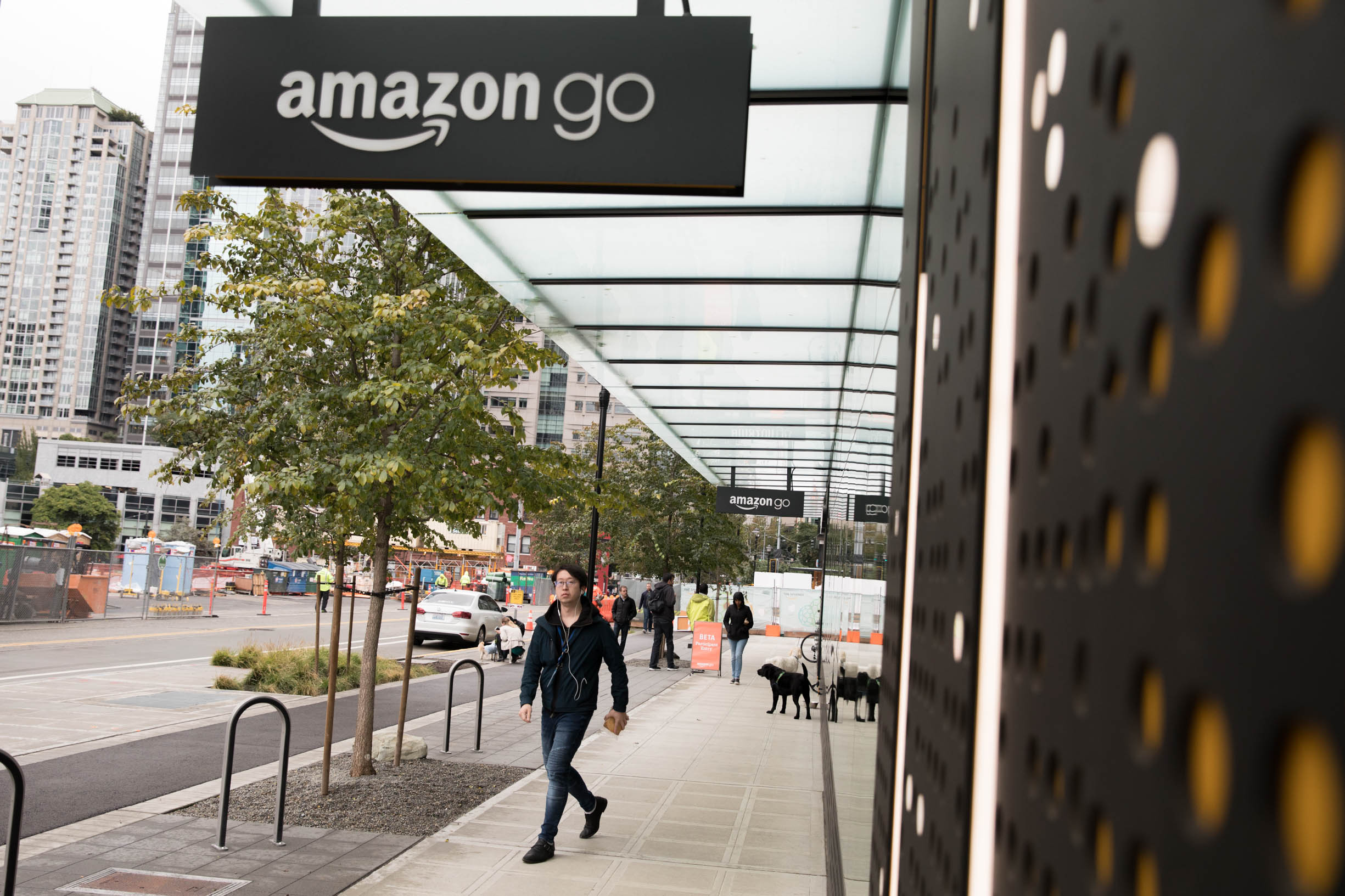 Advances in artificial intelligence are at the heart of the Amazon Go stores, where checkers have been replaced by sensors. (Photo by Matt M. McKnight/Crosscut)

An Israeli company claims it can figure out someone’s personality just by having its machine-learning programs study that person’s face. Meanwhile, in China, a machine-learning program picks criminals from noncriminal just from looking at their photos. The program relies on data based on conclusions made by Chinese judges. The criminals looked more masculine, the judges had concluded, had smaller eyes and were more likely to frown than the noncriminals.

But is this a fair way to label someone a criminal?

This is the kind of question that students grapple with in the University of Washington’s new course in artificial intelligence ethics, which wrapped up earlier this month. Developed by professors Adrienne Fairhall and Blaise Aguera y Arcas, the course asks thorny questions about bias, privacy and surveillance in technology that has infiltrated our modern lives, from the checkout counter to self-driving cars.

Another lesson in artificial intelligence has been happening about 60 miles down I-5, where lawmakers have been contemplating the role that government should play in regulating how artificial intelligence  — of which “machine learning” is a subset — is developed and deployed, as well as what to do about its potential impact on labor.

In recent weeks, the Washington House Technology & Economic Development Committee has received two briefings in Olympia concerning Washington state’s place as a center for artificial intelligence — an attempt to “get our mind around the subject,” said Rep, Jeff Morris, D-Mount Vernon and outgoing chairman of the technology committee. At issue is how the industry can be improved and, if necessary, regulated.

The Legislature is acting now because the world of artificial intelligence is booming.

This month, a report by experts from several universities and corporations — dubbed the “AI Index 2018” — noted that while there were no artificial intelligence startup ventures in 1995, almost 5,000 such companies existed by 2015 and slightly more than 10,000 exist today. Another indication of this boom is that 2017 produced nine times the academic papers on artificial intelligence than were written in 2000.

“We are Ground Zero of an amazing AI cluster,” said Joseph Williams, director of tech industry economic development at the Washington Department of Commerce.

Other investments are on the rise. The University of Washington, for instance, is increasing its AI footprint.

The number of students at the University of Washington studying some form of artificial intelligence has jumped from about 200 in 2008 to almost 1,000 today. The number of artificial intelligence and machine-learning instructors at the university’s Paul Allen School of Computer Science & Engineering has increased to 20 from eight in the same period.

Naturally, the number of courses at the school for both major and nonmajors has grown as well, to 10 today from four in 2008, and include natural language processing, robotics and deep learning. These do not include artificial intelligence-related classes taught elsewhere at the university, including the new ethics course.

“I think it would be great if we can expand more rapidly,” said Dan Weld, who teaches artificial Intelligence courses at the University of Washington. “I’m not sure we’re meeting the demand.”

“It’s always hard to predict whether we’re at the beginning of huge growth or if we’re at a point where the bubble will pop,” he added, noting that he personally believes the field is facing a huge growth spurt.

Williams said the Seattle area now accounts for 5.9 percent of the job posting for artificial intelligence jobs in the nation — sixth best in the United States, behind New York City at 11.6 percent, San Francisco at 9.6 percent, San Jose at 9.2 percent, Washington, D.C., at 7.9 percent and Boston at 6.1 percent.

“We have way better talent than New York on AI,” Williams said. “(Washington state) is just not on the radar screen.”

Washington state has roughly 6,400 people working in the artificial intelligence industry, although not all are actual AI researchers or scientists, whose jobs come with salaries of $300,000 to $500,000 a year. The competition for these workers is fierce. “We get our data scientists poached all the time,” Sacha Fontaine, energy solutions director for Siemens.

One way the government could help the industry is to increase the flow of homegrown talent, said Weld, the UW instructor. He believes the Legislature should focus on efforts by the state’s school districts to prepare students for the field. “It’s important to make sure computer science is taught at the (elementary) and the high school levels,” he said

Roughly a third of Washington’s high schools teach advanced computer science, and the state does not have a plan to provide computer science in the rest of the schools, especially for those that currently do not have the money to do so, said Ed Lazowska, who holds the Bill & Melinda Gates Chair at the UW's computer science and engineering school.

“Computer science needs to be available in every school in our state,” he added.

As far as regulation goes, Dan Grossman, deputy director of UW’s computer science and engineering school, said he believes the Legislature should pick its path carefully in tackling artificial intelligence. “The best regulation is not about a particular technology, but about a particular problem,” he said. “Where autonomous vehicles are allowed and not allowed to drive — that is the role of government.”