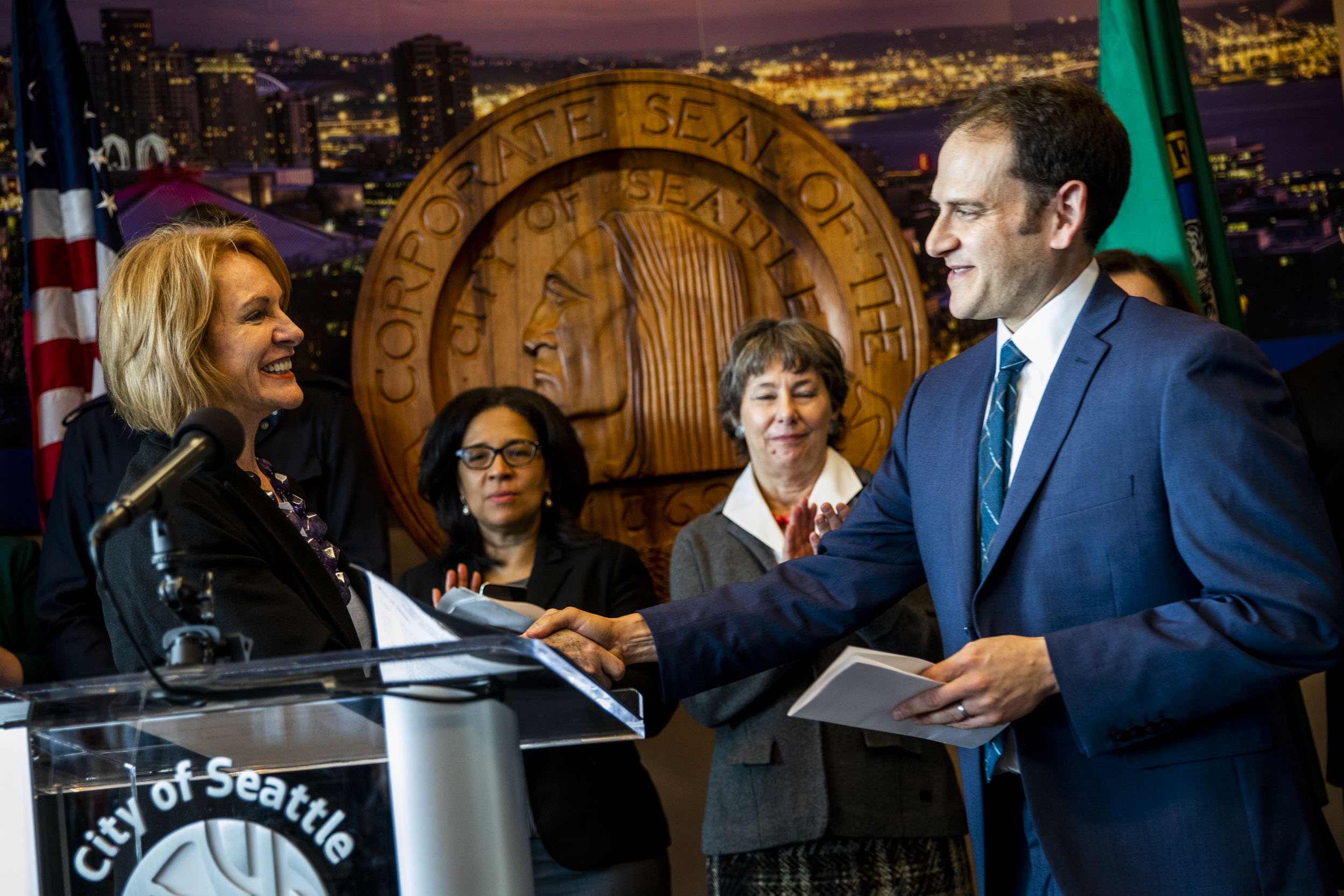 Mayor Jenny Durkan announces Sam Zimbabwe as her nominee for the new director of the Seattle Department of Transportation at City Hall on Tuesday, Dec. 18, 2018. (Photo by Dorothy Edwards/Crosscut)

Mayor Jenny Durkan announced Tuesday that she has nominated Sam Zimbabwe to be the next director of the Seattle Department of Transportation, putting an end to months of speculation about who would lead the city through what could be years of transportation chaos.

"We needed someone with a bold vision for transportation in Seattle," said Durkan. "Someone who had worked across all modes of transportation and proven that he knows what a growing city needs and how we build that urban environment of the future; someone who’s had experience delivering big projects on time and on budget. I think we found that leader in Sam Zimbabwe."

Zimbabwe has spent the better part of the past decade working for the District Department of Transportation in Washington, D.C., as did SDOT’s last permanent director, Scott Kubly. Zimbabwe also worked on bike-share and bus rapid transit, as did Kubly.

Of the three finalists interviewed by Mayor Durkan, Zimbabwe’s resume is the most traditional for a transportation head. He has a master’s degree in city planning and urban design and has worked for years in the transportation sector. Before entering the public sector, he worked with a D.C.-based nonprofit, Reconnecting America, where he dealt with transit-oriented development.

Zimbabwe first began working for the District Department of Transportation in 2011 as a policy and planning lead. He focused on bike and pedestrian programs, as well as transportation demand management — working to get people to use modes of transportation other than driving.

In 2017, Zimbabwe became the department’s chief project delivery officer, where he worked on bike-share and bus rapid transit.

"No other city across the country has the type of trajectory and challenges that Seattle is facing right now," said Zimbabwe. "It’s truly an exciting place to work."

Brian O'Malley, President and CEO of the Central Maryland Transportation Alliance, worked with Zimbabwe in 2008-2009 when O'Malley's non-profit hired Reconnecting America to produce a strategic plan.

In an email, O'Malley said Zimbabwe was a good listener and problem solver. "Sam was technically very savvy, both with fine-grain things like getting data and using geographic information systems software to analyze it, and big-picture thinking like creating a framework that used our goals to evaluate every transit station in our region to identify the best opportunities," he wrote.

David Cranor with the D.C. bike advocacy organization the Wash Cycle called Zimbabwe "great on bike and pedestrian projects," even if he's "incremental" and not one to push the envelope.

"Sam gets it when it comes to how cities have to view transportation in the future — less focus on driving and more on safe movement of people," Cranor said in an email. "He's a big reason why our bike sharing has expanded so much and into both docked and dockless."

If confirmed by the Seattle City Council, Zimbabwe will inherit an immediate and intimidating to-do list. The city will be without Highway 99 for three weeks in early 2019 after the viaduct portion is closed and before the new tunnel is opened. Construction crews will begin to dismantle the viaduct in February. Light rail and convention center construction will force buses out of the tunnel and onto downtown streets. Construction will likely begin on the new waterfront. Coleman Dock is undergoing a major renovation, further disrupting downtown traffic. And several major private construction projects will continue or begin downtown.

Additionally, the fate of the new downtown streetcar is still unknown. Bus service is undersupplied. The nine-year, $930-million Move Seattle levy is not delivering on promised projects. The city department must coordinate with Sound Transit as it builds out the light-rail network. And a long-promised network of bike trails is way behind schedule.

"I know that we will need to continue to deliver more safe options for walking, biking, people taking transit and how we respond to the unprecedented growth the city has seen in the last several years," said Zimbabwe. "I come from a place where we experienced a similar set of growth challenges and trajectories. We’ve had some of the same challenges, meeting the day-to-day challenges of the citizenry while the city is literally under construction."

Since Kubly resigned in late 2017, SDOT has predominantly been led by Goran Sparrman, whom Durkan appointed as acting director and tasked with doing a top-to-bottom review of the department.

Sparrman left the department in late August for the private sector, and Linea Laird, a former Washington State Department of Transportation administrator of the Highway 99 tunnel project, has served since.

Durkan has made no secret of her dissatisfaction with SDOT's past leadership, especially when it comes to project delivery. "The previous administration, when we promised these projects, we couldn’t deliver them," she said Tuesday.

Among her top issues is the paused construction of the new downtown streetcar, one of the projects she believes the last administration bungled. Asked about the streetcar Tuesday, Durkan said that was part of her calculation in choosing Zimbabwe, who worked on D.C.'s streetcar. She said the city is continuing to move forward on engineering the project and that a final decision on whether or not to move forward with the project would come "soon."

Durkan was also asked about whether she would consider allowing scooters to dot Seattle in the same way bike-share does now. Zimbabwe worked on this issue while in D.C.

The mayor said the city had recently sent a letter to the scooter-share companies asking for more information about injuries and liability and would consider allowing scooter-sharing from there.

When Zimbabwe can get to work will depend on the Seattle City Council, but Durkan said she hopes he's confirmed by mid-January. In any case, Durkan said he will be on the ground in early January to participate in media briefings surround the closing of the viaduct.

A number of city departments still have acting heads and are in need of a permanent appointment, including information technology, parks, economic development, human services, civil rights and human resources.