The political perils of carbon taxes, in Paris and Olympia 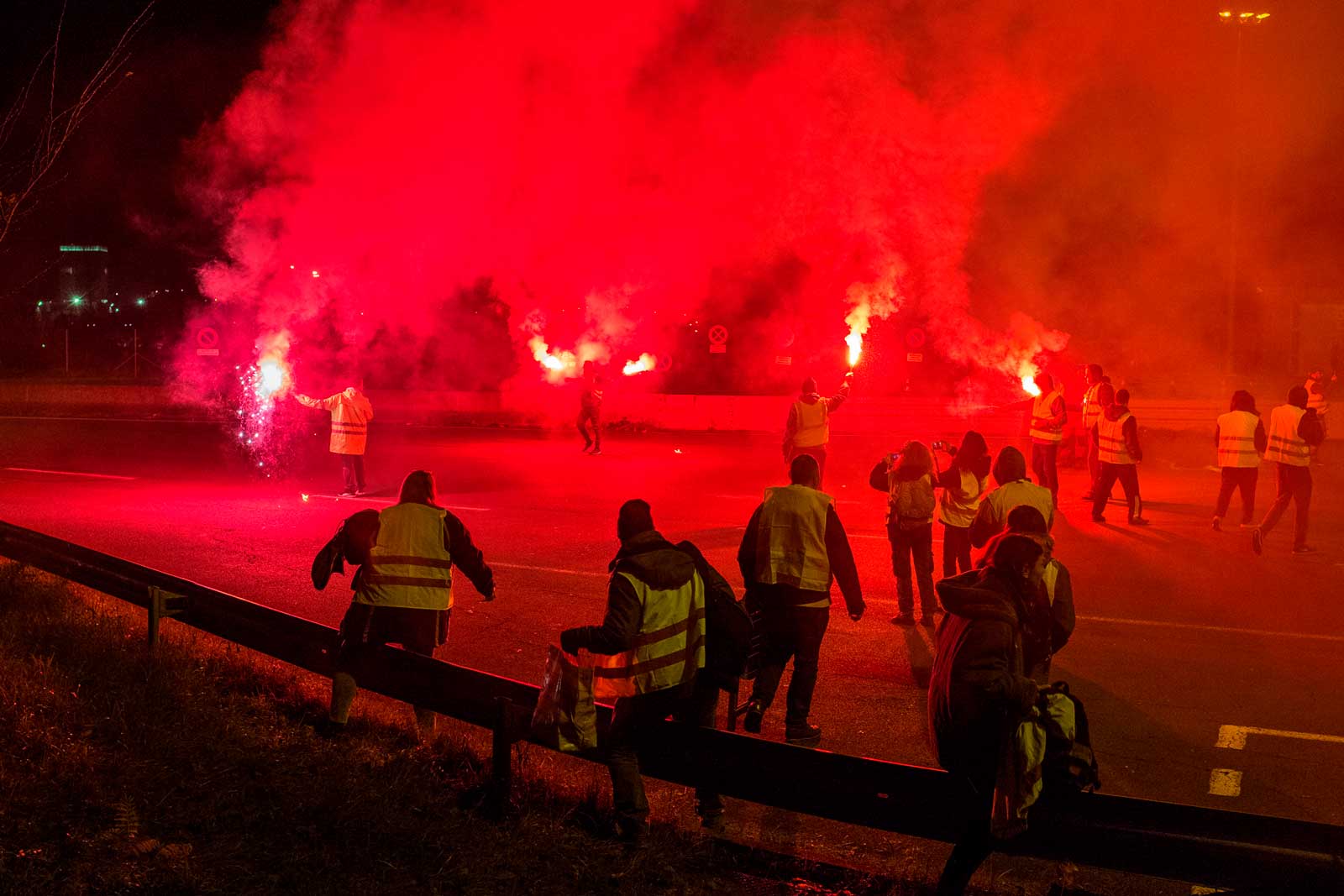 Yellow vests (known in France as Gilets Jaunes) protest in Biriatou, France, on the border with Spain, on Dec. 6, 2018. (Photo by R Cauhepe-Photomobile/ANDBZ /Abaca/Sipa USA; via AP)

It took a couple of weeks, but the American media slowly began to realize that the protests and riots in France were a working-class revolt against France’s ruling elite and its attempt to impose higher taxes to fight climate change.

An almost bizarre coalition of left and right, rural and suburbs, students and cops has emerged. And astonishing video footage of protests has appeared, showing lines of yellow-vested demonstrators standing in front of a phalanx of fortified police — who remove their riot helmets in a sign of solidarity. The yellow vests worn by protesters are carried by drivers in France in case they encounter trouble on the road, making the vests an apt symbol for protesting higher taxes on fuel.

President Emmanuel Macron, whose approval percentages hover in the low- to mid-20s (about half Donald Trump’s), has now suspended the tax increase for at least half a year. The protesters are not mollified.

The gas tax hike was driven less by demonstrable value than auto-pilot ideology. The French already pay more than $7 a gallon for gasoline, with nearly half of that absorbed by taxes. Carbon emissions in France are among the lowest in Europe, and the tax hike would fall hardest on rural, lower-income folks who don’t enjoy the menu of convenient alternatives to driving available in Paris. This was a Boston Tea Party waiting to happen.

And it has changed political reality. Raising taxes on fuel and gasoline for working people in the name of “doing something” to fight climate change has hit a rock wall. And not only in France.

Here in Washington state, public umbrage against an energy tax, even indirectly imposed, torpedoed Initiative 1631, the “pollution fee” measure that would have raised the price of gasoline 14 cents in its first year, and 2 cents more in each of the next 10 years. I-1631 won clear majorities in King County, Port Townsend’s Jefferson County and the tony San Juans — but lost the other 36 counties on both sides of the Cascades.

The initiative was supposed to be a national model for the rest of the states. Instead it lost in clean, green Washington by more than 13 percentage points. Back to the drawing board.

As the Washington Post reported, other climate-change taxes are running into big trouble in Canada, Australia and elsewhere in Europe. Yellow-vested protests have now erupted in the Netherlands, with Dutch demonstrators outside the Hague.

All of this happened as the two-week climate conference began in Katowice, Poland (a coal mining town), featuring 15 signatories of the nonbinding Paris climate accord (Macron skipped it, sending his environmental minister in his place). The conference opened with warnings about global carbon emissions projected to hit an all-time high. But it’s a fair bet that most anxiety among the attendees has less to do with rising carbon output or global temperatures than rising political temperatures from angry citizens fed up with being taxed in exchange for vague promises of a cooler planet a few decades down the road. Especially when the real contributors to carbon dioxide emissions are largely avoiding any major sacrifice for reducing emissions.

Take China. According to the New York Times, China consumes half the coal in the world. Well over 4 million Chinese labor in that nation’s coal mines, compared with about 240,000 coal workers in the entire European Union. Yet under the Paris Climate Accord, China could keep increasing its output of carbon dioxide until 2030. The United States, meanwhile, has cut its carbon output to the lowest level since 1993. When we go lower, China goes higher. It doesn’t do much good for America and the Europeans (combined population: 840 million) to face mandatory carbon reductions while China and India (combined population 2.7 billion) have a green light to belch out more of it for the next dozen years.

Closer to home, Democrats in the state Legislature vow to pass either a different kind of carbon tax or an even more controversial cap-and-trade bill. I don’t know if Republicans are going to get that lucky, but anything remotely resembling I-1631 faces swift rejection by voter referendum.

The conundrum for Democrats in Olympia is that the only type of carbon tax conceivably acceptable to the public would have to be revenue neutral and reduce highly visible taxes (like sales taxes) in exchange for higher prices on carbon related activities (like driving). In short, a transparent swap. But environmentalists and Gov. Jay Inslee himself helped derail a proposal (Initiative 732) that would have done precisely that two years ago. Reason? They don’t want a revenue-neutral tax. They want to make money and grow the government with an additional revenue stream in the name of addressing what they describe as the “climate crisis.”

They can give it a try. But, should they succeed, don’t be surprised if the trend toward yellow vests crosses the Atlantic.