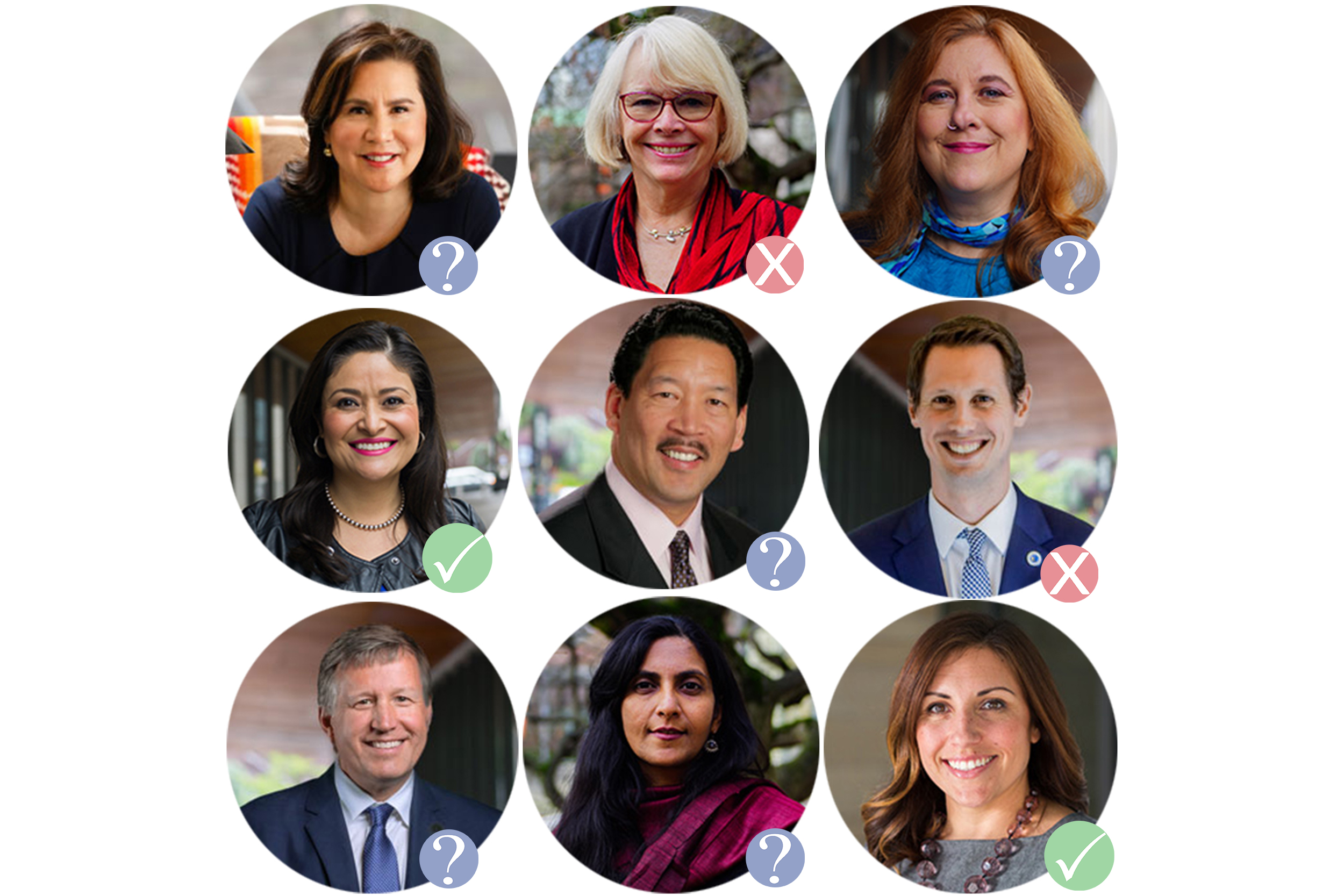 The 2018 Seattle City Council. Top row, from left: Debora Juarez, Sally Bagshaw, Lisa Herbold. Second row, from left: Lorena González, Bruce Harrell, Rob Johnson. Bottom row, from left: Mike O'Brien, Kshama Sawant, Teresa Mosqueda. (Photos courtesy of City of Seattle) The council comprises members whose terms aren't up for re-election, who have announced they won't be seeking another term in the new year and those with candidacies still up in the air.

As we close the books on 2018, it’s a good time to think about whether 2019 will be a year to be thankful for or a year to dread. If 2018 offers any clues, we can count on equal parts dread and optimism in our next spin around the sun.

Here are some predictions of what may come our way.

Let’s start with January, that unfun month when many of us decide to atone for our excesses over the holidays. Along with the personal purging of rich foods and cocktails, we will experience The Period of Maximum Constraint, or Viadoom — a time when the western north-south corridor through Seattle will be removed from operation with the removal of the Alaskan Way Viaduct.

People are going to be frustrated and angry, and there’s not much anybody can do about it.

Frustrated and angry might be the best way to characterize most of the world right now. Before we get back to the local scene, the world is getting a heavy dose of fear and xenophobia, which is a recipe for riots and unrest. In 2019, look for more chaos and nervous markets fluctuating wildly. The question becomes whether or not all of this unrest and volatility leads to a worldwide recession. Throw in a trade war or two and the completion of the Mueller investigation and 2019 could look a lot like 1930 or 1974. Good news for cable news networks, bad news for us.

At home, the state Legislature kicks off its session in January, and will spend months in Olympia grappling with replacement of Western State Hospital, as well as staff safety issues. The state already lost federal accreditation and $53 million per year in funding. Mental health and the opioid crisis will rightfully get more attention.

Longtime House Speaker Frank Chopp has announced this will be his last session as speaker. Expect to see lots of noncampaign campaigning for the right to replace him. There is a good chance that the next speaker will be a woman, but there will likely be several contenders. It is no easy job that requires organizational and interpersonal prowess. And then there are the legislative staff and human resource challenges that pop up rather routinely. Chopp has done a remarkable job. Replacing him will be a difficult act to follow.

The Seattle Public Schools will be asking for a levy renewal in February. At this point, it is just a renewal of the Capital and Operations Levies that expire at the end of 2019. Seattle voters tend to vote for most levies, but particularly for education. That trend is likely to hold up.

By the time lawmakers wrap up (in April, if they are on time), the Mariners will have begun the baseball season. Their opening games in Japan will draw plenty of attention. Back home, the Mariners will play in an empty stadium with players nobody knows. Sigh.

The filing deadline for Seattle City Council elections won’t come until May but the jockeying — already underway — will be getting more frenetic just as the Viadoom traffic hits. Not a great way to kick off your re-election bid if you are a council member.

The entire campaign, including the August primary, will be marked by a referendum on the city council. All seven of the district-elected council members will be up for re-election for the first time — defending their records serving their districts. The two at-large council members, Lorena González and Teresa Mosqueda, are not up until 2021, for which they must be grateful). Of the seven seats up next year, two incumbents, Sally Bagshaw and Rob Johnson, have announced they will not run. Already, there are indications that a lot of strong candidates will be running for the open seats as well as challenging incumbents.

Two big questions: First, will Kshama Sawant run? She will face at least two strong challengers in her east and central Seattle district next year. Her national brand would suffer greatly with a loss. Will all of this cause her to join the national Socialist Alternative Party in New York? Plus, it is hard to lead an international revolution from a Seattle City Council district. My hunch is she’s on the phone quite a bit with the 212.

Second, will Mike O’Brien run? There was a robo-poll in the field in his northwest Seattle district gauging his performance and approval rating against two hypothetical challengers, State Rep. Gael Tarleton and Fremont Brewery owner Sara Nelson. There are only two reasons to poll this early: One is to decide whether or not you are viable and, two, what issues and demographics play with you and against you. Will the results make him announce, perhaps even in January, that he wants to spend more time with family? Or will it be full speed ahead?

My prediction: When the 2019 Seattle City Council elections end in November, there will be at least four new faces among the winners. The 2019 campaign will be one of change and order. Candidates who demonstrate a willingness to listen, work with people with whom they disagree, and craft common sense compromises will hold the upper hand.

The coalition of businesses and neighborhood grassroots activists that formed in opposition to the so-called head tax on businesses will provide the votes necessary to counter single-issue activists. The question after the election will be one of how that coalition holds together moving forward. Forming coalitions to win elections is easier than holding them together when governing. There will be big disagreements on solutions to ever worsening homelessness, mental health and drug addiction, transportation and land-use planning. But the lessons of accountability delivered in 2019 will not be lost on new council members.

The council shakeup will be the biggest local story of 2019, resulting in a center-left governing majority of 6 to 3.

Other 2019 elections: While sometimes the forgotten election, there will be a Port of Seattle election. Commissioners Courtney Gregoire and Fred Felleman are both up for re-election. Look for this to be a somewhat sleepy affair as there has not been much controversy and there are no rumors of major challengers entering the fray.

At the state level, everyone you know will be running or maneuvering for either governor or attorney general in the 2020 election. With Inslee away in Iowa exploring a run for president, the jockeying for the governor’s mansion in 2020 will be in full force. With Attorney General Bob Ferguson being the favorite to replace Inslee, the AG’s post will have plenty of suitors.

Potential candidates for governor also include current King County Executive Dow Constantine and someone who should be talked about more, Lands Commissioner Hilary Franz. The real question will be if the state Republican Party can field competitive candidates for these races. After all, Dino Rossi and Susan Hutchison are probably ready to take a break from campaigning.

The coming year will be a time of some optimism locally. We will hopefully get back to a less rancorous public debate at city hall and specifically city council. Collegiality will make a comeback and shouting and demonizing will fade away.

Unfortunately, I do not have the same optimism nationally and internationally. With lots of people running for president and investigations multiplying there will be little time or desire to deal with pressing issues. China and Russia will exploit our divisions and a fractured world to our detriment. This is why it will be so important for our state and local institutions to be cooperative and strong. In many ways, we will be on our own.

So Happy New Year and good luck. I hereby declare January 2019 to be Work from Home Month. Oh, the traffic will be terrific.