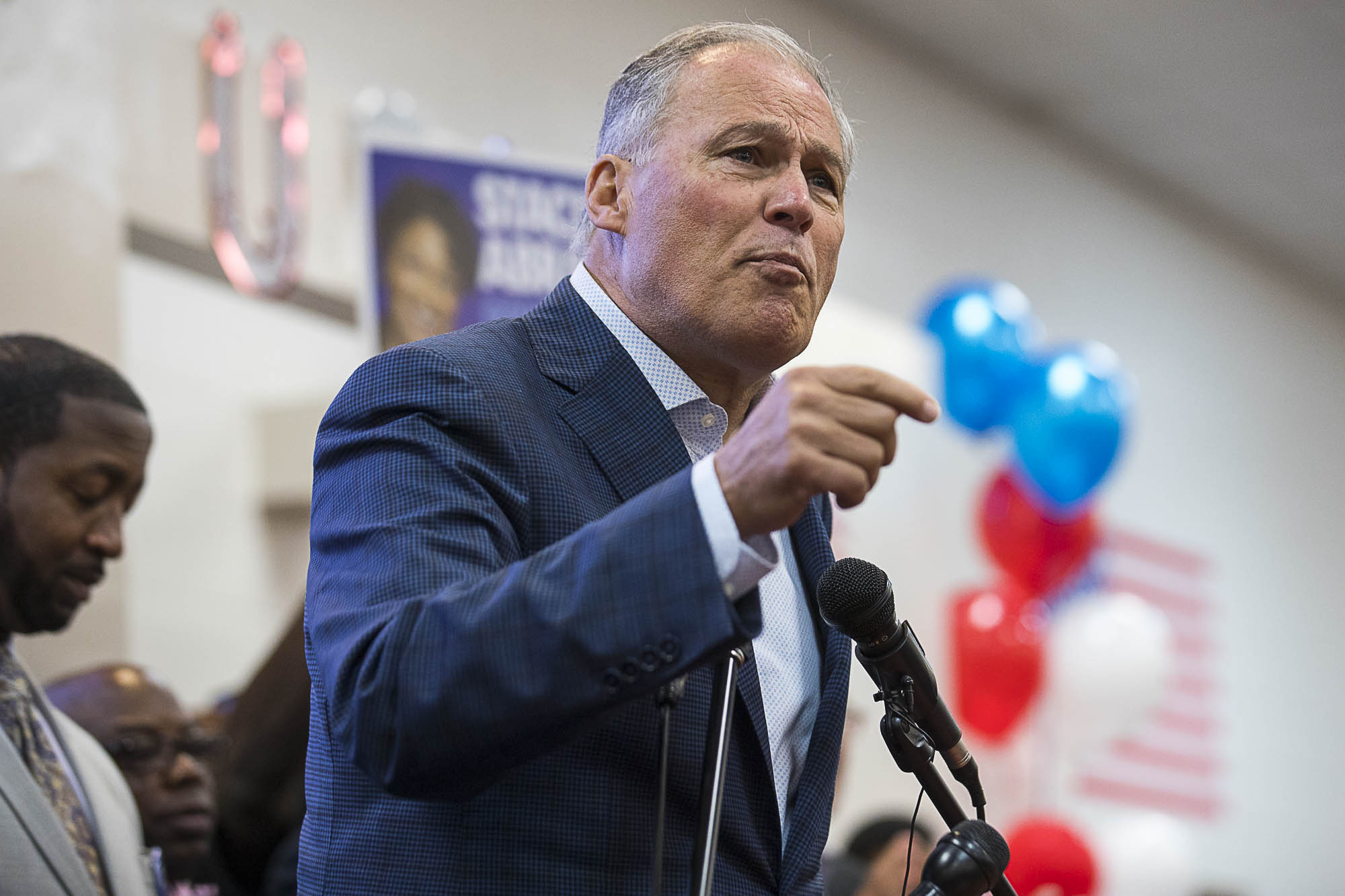 In this Nov. 5, 2018, file photo Washington Gov. Jay Inslee speaks in Savannah, Ga., at the Longshoremen Union Hall during a "Get Out the Vote" rally. Inslee is considering a run for president. (Photo by Alyssa Pointer/Atlanta Journal-Constitution via AP)

The last politician to run a serious race for president from this state was the legendary Sen. Henry “Scoop” Jackson in 1976.  His credentials were impeccable.

Widely regarded as smart, effective and informed, Jackson, a Democrat, was respected in both parties. When Jack Kennedy won the Democratic nomination for president in 1960, brother Bobby, his campaign manager, wanted Jackson on the ticket. Alas, JFK opted for Lyndon Johnson from Texas, and Scoop was given the chairmanship of the Democratic National Committee as a consolation prize. In 1969, Republican President Richard Nixon asked Jackson to be his secretary of defense, which the senator turned down.

When he finally stepped up to run in ’76, Jackson had organization, money and the support of organized labor. His stalwart support of the war in Vietnam made him a pariah among the anti-war left, but the war was over, and Jackson had a superb liberal record on civil rights, the environment and labor issues. He had never lost a race.

But he did in 1976. It was the first presidential election after Watergate. Several additional scandals, involving powerful Democratic Congressmen Wilbur Mills and Wayne Hays, had soured the public on leaders from Washington, D.C., where Jackson had been serving for over 3 1/2 decades. Good man, wrong time.

If Jackson couldn’t win, can Jay Inslee 44 years later? Not likely. But let’s weigh the pros and cons as well as two successful models he could emulate and one he should avoid.

So where does that leave Inslee?  Easy to dismiss, if you’re an oddsmaker, but two other longshots ended up on national tickets because they defied the odds. One was Jimmy Carter, who beat Scoop Jackson in ’76.  A former one-term Georgia governor and legislator, Carter, a peanut farmer and Sunday school teacher, was the candidate with the fewest ties to the nation’s capital in a year Democrats wanted someone outside the D.C. power structure, but not so liberal that they would relive the 49-state drubbing suffered by their nominee, George McGovern, four years earlier. Carter represented a “New South” politics that rejected the negative tone of George Wallace and made him palatable, if not preferable, to the liberal wing of the party.

So how did he do it?  As Joel Connelly, the Seattle Post-Intelligencer’s national correspondent back then, recalls it, Carter basically moved into Iowa two months before the state's first-in-the-nation caucuses. He turned heads by staying at the homes of supporters, and shook hands in virtually every Grange hall and diner in the state. Quite a contrast with the high-powered glitz of Washington, D.C. He finished ahead of all his contenders, then built on that momentum by winning New Hampshire.

Right candidate, right time, right tone and tactics. That is how an underdog becomes leader of the free world.

Another model is Democrat Al Gore. In ’88 Gore ran unsuccessfully as a moderate alternative to Jesse Jackson and the eventual (disastrous) nominee, Michael Dukakis from Massachusetts. His stature was elevated by the campaign, and four years later he was tapped by Bill Clinton as his running mate, something that Connelly and others have suggested could be Inslee’s realistic goal. With an assist from third-party contender Ross Perot, the duo ended 12 years of Republican rule in the White House.

The model Inslee should not emulate: Democrat Martin O’Malley, the ambitious former Maryland governor, who headed the Democratic Governors Assocation (as Inslee does now) and managed to run for eight months without saying anything interesting. In February of 2016 he packed it in and endorsed Hillary Clinton. Hardly anyone noticed.

The lesson for Inslee is this: You can’t outraise your opponents, so outwork them and outsmart them. That means setting down stakes in the Hawkeye state, as Carter did, or throwing an occasional sharp elbow, as Al Gore did against Jesse Jackson and Mike Dukakis.

Start by answering this question: Do you have anything to say as a candidate that nobody else is saying? If the answer is yes, then say it. If the answer is no, you’re better off skipping the race, campaigning hard for the eventual Democratic ticket and hoping for an appointment at Interior or Environmental Protection Agency.