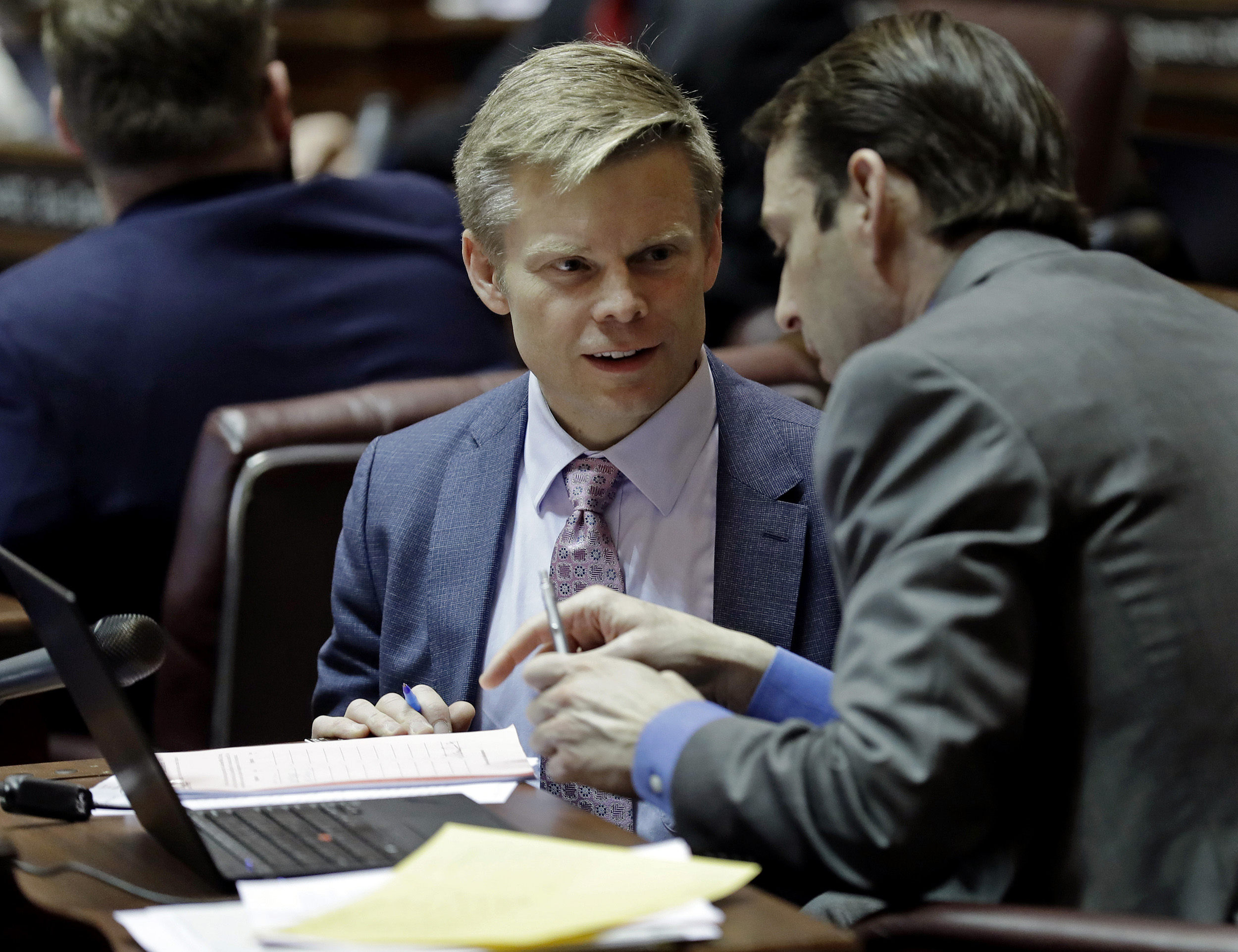 Sen. Jamie Pedersen, left, D-Seattle, talks with a colleague on the Senate floor in Olympia on Jan. 30, 2019. Pedersen introduced a bill Jan. 31 that he says moves the Legislature toward more transparency, but within limits. (AP Photo/Ted S. Warren)

Washington legislators got smacked down hard in the court of public opinion last year after they fast-tracked a bill that would exempt themselves from the state’s Public Records Act. Their speedy action, which came shortly after a trial court judge ruled lawmakers had been illegally withholding public documents, garnered tens of thousands of emails from irate constituents and a veto from Gov. Jay Inslee.

Now, some legislators are trying again with a legislative records bill they say is a substantial improvement over last year’s version.

"The things that I heard from my constituents convinced me that we really needed to go in a different direction," said state Sen. Jamie Pedersen, D-Seattle, the bill's prime sponsor.

Yet the new proposal, Senate Bill 5784, still would grant state lawmakers broad authority to withhold government documents, including options for secrecy that most other public officials don’t get. The measure was discussed in a public hearing Wednesday.

Here are the top ways the new bill would give legislators special permission to conceal their working documents from the public. Each goes beyond the exemptions the state’s public-records law grants to local city council members, statewide agency heads or even the governor.

Once a public body reaches a decision or takes an action, the documents illuminating that internal deliberation must be disclosed.

By contrast, the current proposal before the Legislature would permanently close off documents that could illuminate how legislators arrived at their decisions — including after a bill becomes law.

That is a privilege not even granted to the governor, who the state Supreme Court has ruled has unique constitutional authority to withhold some deliberative communications. Inslee, for his part, has promised never to use this form of executive privilege to bury documents.

“All of this stuff comes out eventually,” said Toby Nixon, president of the Washington Coalition for Open Government. “What they are trying to do in the Legislature is keep it a secret forever.”

The new bill would also exempt internal documents containing "legal, policy, or fiscal options, analyses, models, or  analytical tools" — language so broad that it potentially could be used to withhold basic summaries of bills and what they would cost taxpayers, said open government lawyer Kathy George.

Under the current Public Records Act, or PRA, police agencies can withhold details of police investigations when they are still ongoing. Similarly, state agencies can potentially withhold the identity of someone who has complained about workplace sexual harassment, if releasing the accuser’s name could subject that person to retaliation, Nixon said.

Those public agencies, however, don’t have the ability to permanently conceal witness statements and other investigative records that show how an agency may have responded to a complaint, he said.

Pedersen's proposal, meanwhile, would do exactly that when it comes to investigations of sexual harassment at the Legislature.

Under the bill, only an investigator’s final determination would be released to the public. Constituents would have no access to the documents that led to the final decision. Nor would they be able to determine whether the Legislature acted appropriately in cases where a formal investigation into a lawmaker’s conduct was never completed.

“They want to say we don’t get anything unless there is an official finding, and we don’t get anything except the official report,” said attorney Michele Earl-Hubbard. She is representing 10 media organizations in the suit that served as a catalyst for the Legislature's attempts to rewrite the public-records law.

“That’s different from every other public agency,” she said.

Pedersen’s bill would also conceal the identity of anyone who emails a legislator to comment on legislation, ask a favor or suggest changes to a bill, unless that person is officially registered as a lobbyist.

In most cases, state and local government officials don’t get the same dispensation to conceal the names of people who contact their office in writing.

While some sensitive information, such as a person’s Social Security number or the name of a crime victim, can be withheld under the law, those narrow protections don’t extend to the names and phone numbers of anyone seeking to influence policymakers, Nixon said.

The Public Records Act also requires government officials to respond to public requests for documents in a timely manner. The bill now before the Legislature, however, would exempt the legislative branch of government from some of those same obligations, George wrote in an email.

For instance, part of the bill would allow the Legislature to delay answering requests while the Legislature is in session. Based on past history, that could mean months when requests go unanswered. In some recent sessions, the Legislature has gone into deep overtime, with their work occasionally stretching from January to July.

“Disclosure could be delayed simply because the Legislature is in session, basically making the PRA a useless tool for influencing legislation before it is adopted,” George wrote.