Democrats, lurch left at your own peril

Early presidential candidates have pushed a progressive agenda on health care, abortion and climate. Could this help re-elect Donald Trump? 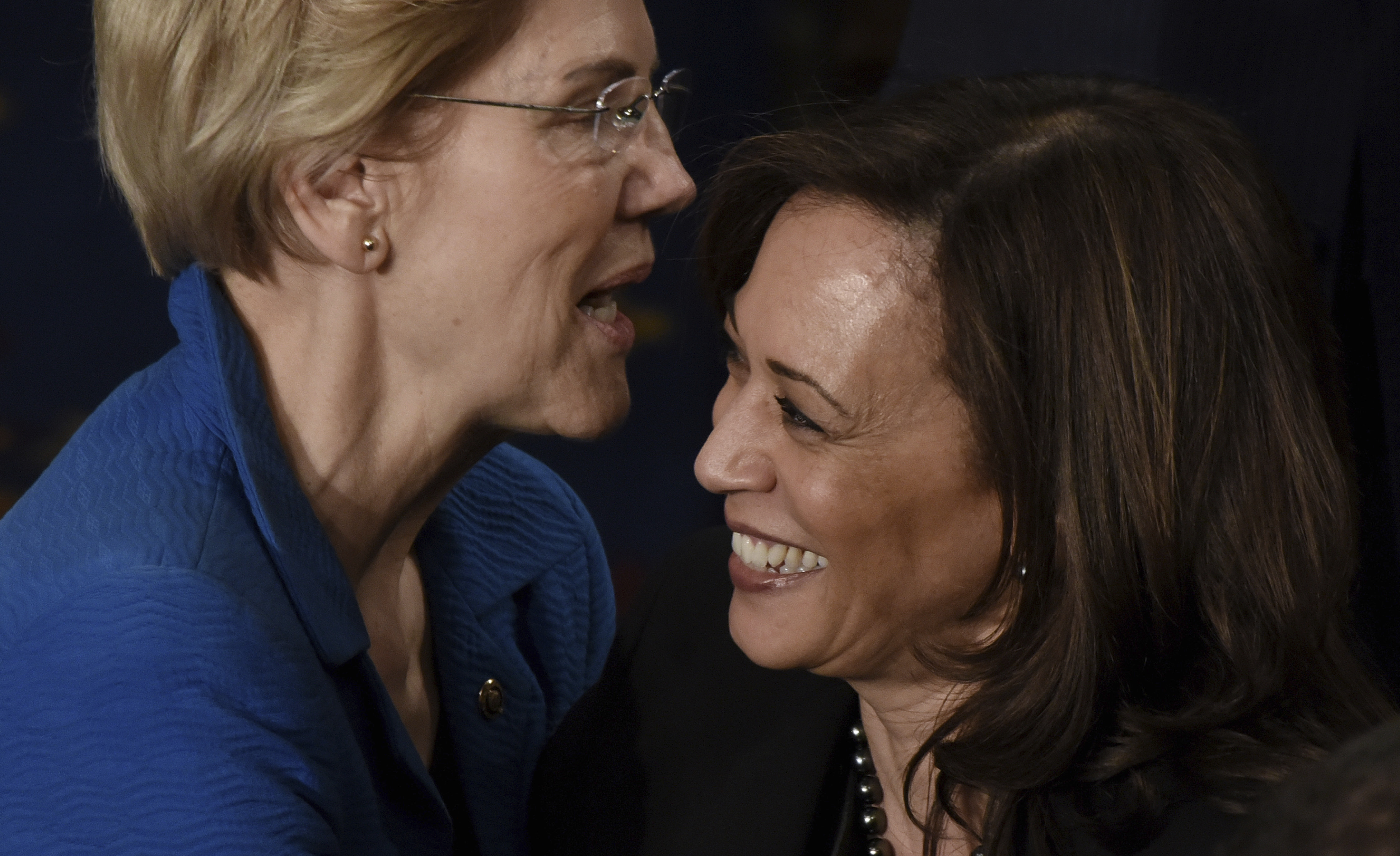 Senators Kamala Harris, and Elizabeth Warren attend the State of the Union address at the U.S. Capitol in Washington, D.C., on Feb. 5, 2019. (Photo by Olivier Douliery/Abaca/Sipa USA via AP)

I know very few people who are ambivalent about Donald Trump. In fact, I don’t know anyone who’s ambivalent about him. People either like him (some passionately) or loathe him (some ardently). He is running for re-election and while Democrats are still hoping for a Robert Mueller rescue — or one from the U.S. attorney's office in the Southern District of New York — it’s not likely’ Trump will be driven from office or be easy pickings, even if he ran while wounded. After all, he did that last time and won.

In other words, the Democrats aren’t going to win by default. They will need a superior candidate — sorry, Spartacus; sorry, Jay; here’s your gold watch, Bernie; it’s been nice, Elizabeth — with a superb plan running a sterling campaign. Here’s the good news for Democrats: their road map to victory is simple. Hang on to all the states Hillary Clinton won in 2016, and win two of three states — Michigan, Pennsylvania and Wisconsin — which had been voting Democratic for president since the ‘80s until Trump narrowly snared them. Maybe add Florida, Arizona or North Carolina for an extra cushion.

Here’s the bad news for Democrats: they are currently embracing policies and positions that are likely going to drive the very voters they need back to Trump.

Two weeks ago, Sen. Kamala Harris of California signed on to the Bernie Sanders “Medicare-for-all” bill, which would make it illegal for your employer to provide your health-care coverage, or for you to buy your own policy. Sen. Kirstin Gillibrand from New York also has jumped on board, telling an interviewer that abolishing private insurance in the U.S. should be a party goal.

Then comes the fixation in New York, Virginia and several other states with loosening restrictions for third trimester abortions. More than 60 percent of men and women in the country support a woman’s right to obtain an abortion in the first three months of pregnancy, according to an NPR report citing a Gallup poll. Only 13 percent support that right during the third trimester. A separate YouGov survey for Americans United for Life shows 66 percent of pro-choice Americans opposed to third trimester abortion.

Arguments aside, replacing “safe, legal, and rare” as a standard for terminating a pregnancy with “Shout Your Abortion!” is not a likely way to win 270 electoral votes. Proponents will argue that third trimester abortions are often about a women’s health, but these bills are written to define that term — both physical and mental health — so broadly that it can’t be legally enforced. Just one more reason for Catholic Hispanics to find someone else to vote for.

Then we get to U.S. Rep. Alexandria Ocasio-Cortez’s “Green New Deal.” The overview and fact sheet

pledges a 10-year time period for transforming every aspect of American life. This means ending or drastically curtailing fossil fuel industries, including oil, natural gas and coal. And even though nuclear power is carbon neutral and operates in 30 states, it needs to go as well. But not to worry. According to the plan: “The Green New Deal will prioritize creating high-quality, family-wage-supporting union jobs in communities that rely on fossil fuel industries.”

It will? How? Thank goodness they’ve added more detail: “It will ensure that all communities have a better alternative for high-wage work before they transition away from fossil fuel industry based work.” What are those “high wage alternatives”? The details don’t explain.

Other industries targeted for massive shrinkage: air travel, because a massive new network of high-speed rail (I wonder what the carbon footprint will be for constructing it?) will make most air travel obsolete. How will the aerospace workers react to that? For that matter, how will air travelers react to it? The bold, impassioned call for a massive, national high-speed-rail system collides with liberal California Gov. Gavin Newsom’s recent decision to end the Golden State’s high-speed-rail corridor between Los Angeles and San Francisco because it costs too much and takes too long. Locally, it took about 20 years to build out light rail from the town of SeaTac up north through downtown to Husky stadium.

Oh, and every building and home in the country will need to be “upgraded … for energy efficiency.” That means 2,500 structures will need to be rebuilt or retrofitted every day for 10 years.

By the way, an afterthought: How will all of this be paid for? The Green New Deal overview dots the “i’s” and crosses the “t’s” this way: “The question isn’t how we will pay for it, but what is the cost of inaction?” And in case you’re slow on the uptake: “The Green New Deal is a massive investment program, not an expenditure.”

Unbelievably, five candidates for president — Harris, Sanders, Cory Booker, Elizabeth Warren and Amy Klobuchar — have signed on to this plan.

No wonder Howard Schultz doesn’t feel at home in this party anymore. Everything the Democrats have been doing in the past two weeks validates his decision to run outside the party structure and justifies his critique that the party is being held hostage to its far left flank. If you are running for the House in Seattle or the Senate in Vermont, fine. Or for governor in California or Connecticut. But is this how you rebuild the "blue wall" and take back Michigan (autos), Pennsylvania (fossil fuels) and Wisconsin (flatulent cows)?

All this is happening while Trump is on an upswing. The early January Rasmussen daily tracking poll of likely registered voters had him in the mid-40s, falling into the low 40s during the shutdown (he said he’d own it and the voters, with plenty of reminders from the Democrats, took him at his word). But then the shutdown ended, and the president performed better than many expected at the State of the Union. There was no shouting, arm-waving, ranting or name-calling. He looked confident, self-assured, emphasized common ground when he needed to (criminal justice reform, more money for childhood cancer), and magnified issues that don’t cut the Democrats’ way, like illegal immigration (the CBS News poll reported that 72 percent of people watching, including a solid majority of independents, approved of his approach to the immigration issue). He even enjoyed a moment or two of levity with the Women in White. When it was over, 76 percent of the people in the CBS poll approved of the speech, as did 77 percent in the CNN poll (59 percent “strongly”).

His popularity last Monday jumped to 52 percent, with 47 percent disapproving — a 23-month high. Plenty of other polls show him lower, still in the 40s, but they show the same upward trend. Keep in mind that Trump’s approval rating on election day 2016 was a shade under 40 percent.

Ocasio-Cortez, Sanders, Booker, Harris and Klobuchar — along with Pramila Jayapal and Elizabeth Warren — seem to be pushing an agenda that will make blue areas even bluer, but they may send purple areas into the red column, lose half their gains in the House, blow their chance to take the Senate and re-elect the most divisive president in modern times. Perhaps instead of asking what they need to do to win (which in the early going apparently means lurching to the left), they should think about how not to blow it again in the general election.