My family was really, really supportive of education, and that was inculcated through several generations. We always learned that the only way out of our poverty was through education. I don't think my parents went on vacation for 14 years just so that we could save money for school. There were a lot of times that they could have taken us out of our more-expensive English-language school and put us in a public school, but they never skimped on education.

I grew up in Hyderabad, India, and I was instructed in English. My dad, for example, went to school where the language of instruction was Hindi. But once the country changed and everything became globalized, he was unable to find work because he didn't speak English fluently. Even though we were poor, my parents made sure that we were able to speak and read English and do academic work — like scientific subjects — in English. They saw language proficiency as a huge advantage.

I was definitely considered low-income at school. Most of my friends were comparatively super affluent. I hadn't even sat in a car until seventh grade. I didn't have television at home, but my friends did, along with a bunch of cable channels. So, there was definitely a knowledge gap, a skills gap, and an information access gap between my schoolmates and me. For example, they had access to libraries, and I did not because we couldn’t afford a library card. And also, there were other things like nutrition: At home, we usually didn't have enough food by the end of the month. A lot of times, I would go over to my friends’ homes to study where their moms would cook for me and feed me because I always seemed hungry.

But I did not experience this as something 'lesser.' I also lived in a poorer part of town where I saw folks who were much worse off than I was. I looked at the kids on the street — they were homeless and survived by begging and picking up scraps and they didn't get to go to school. I always looked at them and thought: Look at me, I have so much more stuff. I am fortunate.

Coming to the United States was never even on my mind until I attended the University of Washington. As I mentioned, I didn't even have television. So, my version of United States was what I learned in my geography textbook. When I did come here, I expected to see bison, because that's what I had read about.

I had also not interacted with anybody outside of my race and culture. I had never left my country or ever flown. The first time that I saw a white person was when I boarded the British Airways plane to come to Seattle, and he happened to be piloting the plane. I didn’t even know how to use the seatbelt we were told to fasten, so I tied it in a bow! That was my level of not being prepared.

When I started university, I had not used a computer and didn't know how to type. When college started and I had to do introductory Bio, Chemistry, Physics, and Math, I discovered that all of our assignments were online. And, I was like, how does that work? That was difficult because my learning curve involved not only the subject matter but also the technology and expectations for how things were supposed to be done.

[At orientation] the first thing they told me to do was to change my name. So for the first four years at the UW I went by Paul. I had my American name, which is luckily my last name. So, it was easier, but I was also uncomfortable not being me.

A lot of my coping with these issues was self-taught because of shame. I felt like if I let people know that I don't understand certain things, then I would just be kicked out of school. I was so scared and had imposter syndrome that I would not even ask questions. And also, in most of my classes I was the only brown person — this was in 2003. The demographics have since changed hugely, in a good a way. But at the time, I felt that I was representing a community, and I didn't want people to think that Indians were stupid or brown people were not smart.

Biology was the subject that fit closest to what I wanted to do. It also went back to what I really love, which is understanding how things work. Every single thing around you is made up of molecules. If you can understand the behavior of molecules, you can explain why this sofa looks the way that it does, or why the metal on my ring behaves differently than the metal in electrical wiring. I just loved being able to do that. 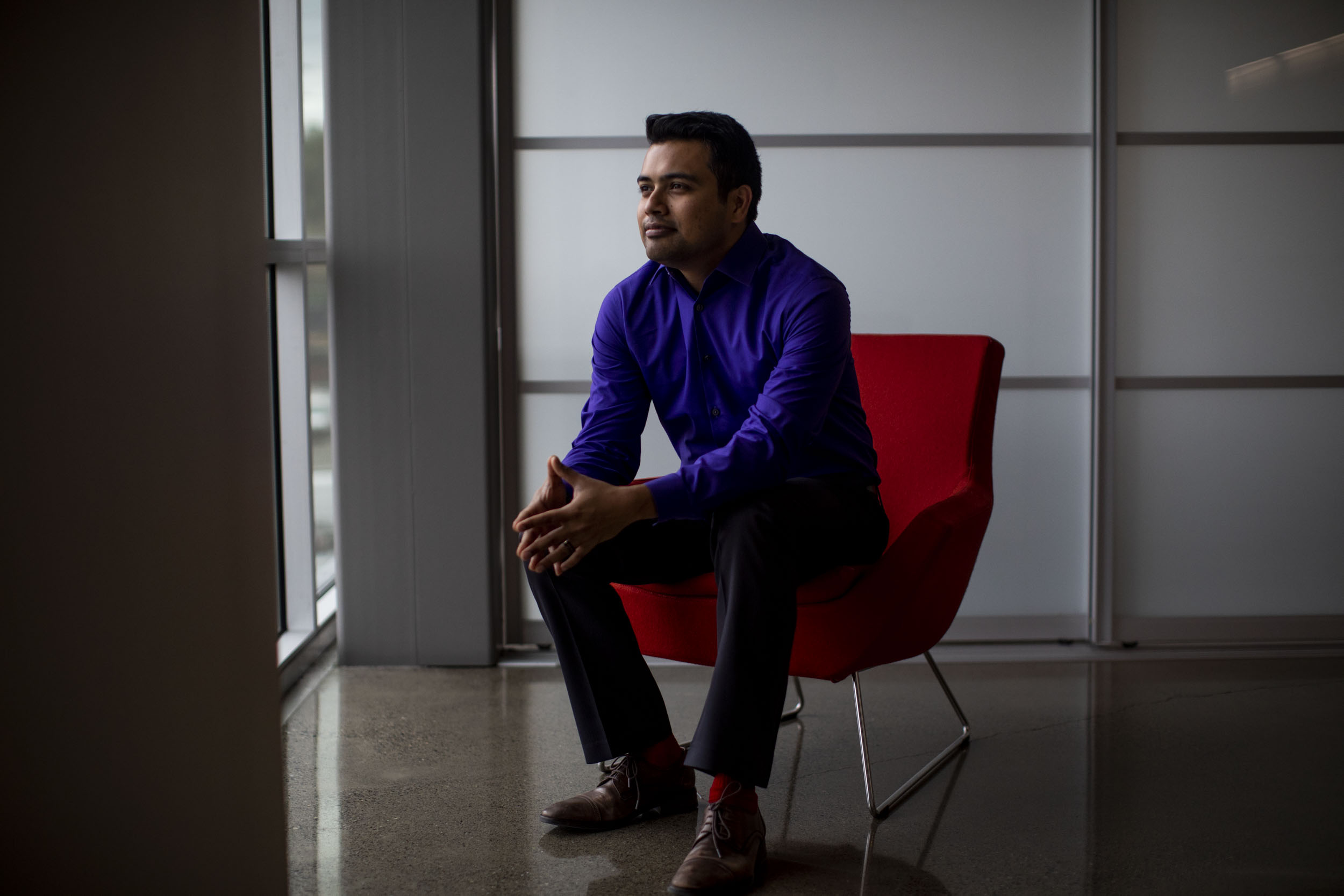 Bish Paul in the Washington STEM offices in Seattle on April 16. Paul is the policy manger at the nonprofit. (Photo by Dorothy Edwards/Crosscut)

Bish Paul in the Washington STEM offices in Seattle on April 16. Paul is the policy manger at the nonprofit. (Photo by Dorothy Edwards/Crosscut)

I took a couple of years off before deciding to pursue my doctorate. And during that time, I got really involved in social justice issues and doing a lot of community organizing. That was also the time when I started exploring what it would mean to come out. At that time, it was still illegal in India to be gay. Punishment could be up to 10 years of prison. So I was trying to unpack sexuality as an identity for myself, while also getting more involved in the community. I wanted to be able to see and explore the intersection of science and social justice.

There were a lot of different people of color (POC) organizations where through volunteering I was able to meet folks who had been through similar experiences. I just loved hearing from them. Once I started speaking up, I found that people really appreciated when I took on leadership positions. And that helped give the positive reinforcement that it was okay to be gay and Indian. It was okay to be queer and be a scientist. Straddling those different spheres while getting positive reinforcement from a lot of the communities that I was inhabiting really helped me become more confident.

As a non-resident in the United States, I was initially on a student visa that helped me to stay in college. And then once the student visa got done, I had around 30 days to find a job, otherwise I would be deported. The clock was always ticking. So for 16 years of my life in the United States, every year had that level of tension and trying to figure out if the government is going to let me stay. Hence, a lot of my decisions were based on necessity rather than choice.

I went back to Fred Hutch as part of my PhD, where I joined the team that was working on an HIV cure. I wanted my doctoral work to have social impact and not just be focused on molecules, a lot of my colleagues are already focused on molecules. What I saw that they sometimes lacked was that the molecules make up a person, and that person then lives in the community, and that community then impacts access to medication, whether they will take their medication, whether they can afford their medication, and how do they even get exposed to HIV, right? There is a lot of need to apply science to public policy and people’s daily lives.

After I graduated and received my Ph.D., I got a policy fellowship with the California Council on Science and Technology. In that position, you serve as an expert for the policy committee. When legislation is introduced and the bill comes to the policy committee, you analyze the bill and do the research on whether this bill makes sense and if the policy being suggested is evidence-based.

I worked within the state legislature for a year and that was a transformative, amazing experience. People really loved that I had intersectionality. In science, the things that made me stand out and that people were uncomfortable with, those were the strengths that the California legislature really wanted because they were like, “oh, great — you are a scientist, you're also a POC, you're also an immigrant, and you have some lived experience of all of these different things.” Intersectionality makes for better policy!

There was this one time where we were trying to create a program for folks to work at the Capitol. And one of the proposed requirements happened to be that you needed to be a US citizen. And so, because I was in the room, I asked, “Why do you need to be a US citizen? And they replied,  "Well, I don't think you can work here if you're not." And I answered, "I'm here." And they asked in surprise, "You're not a citizen?" And I responded,  "No." And they wondered "Oh, how did you get here?" And so we had a conversation about the fact that if you don't make the pathway for people to be able to get here, they're not going to be able to get here. And these laws are never going to change without someone questioning why they were written in the first place. There's no reason to deny someone based on the country that they were born in.

That was the turning point in my life. I realized that I could do scientific research for 20 years and it could get stuck in clinical trails or at the Food and Drug Administration. Nothing could come out of it, or there would be little impact.  Or I could work in policy and impact tons of people and also make sure that I'm advancing evidence-based policy. Science combined with policy can make a difference.

I found community in LGBTQ staff as well. I started the first LGBTQ Staff Association in a state capitol in the entire country. That became a big deal. We were even recognized by Equality California and also Sacramento’s NBA team for our contributions towards community empowerment.

I got my PhD also thinking that I would be an educator. I thought I would probably be a professor because, for me, the way out of poverty and the way to change my life and to live authentically as a gay man, as an immigrant, as a person of color, all of that came through education. I wanted to be able to give that opportunity to other people, but instead of becoming a professor, I am now educating policy makers and amplifying my impact.