On Earth Day, activists joined faculty and staff to call on the University of Washington to fully subsidize employee transit passes. 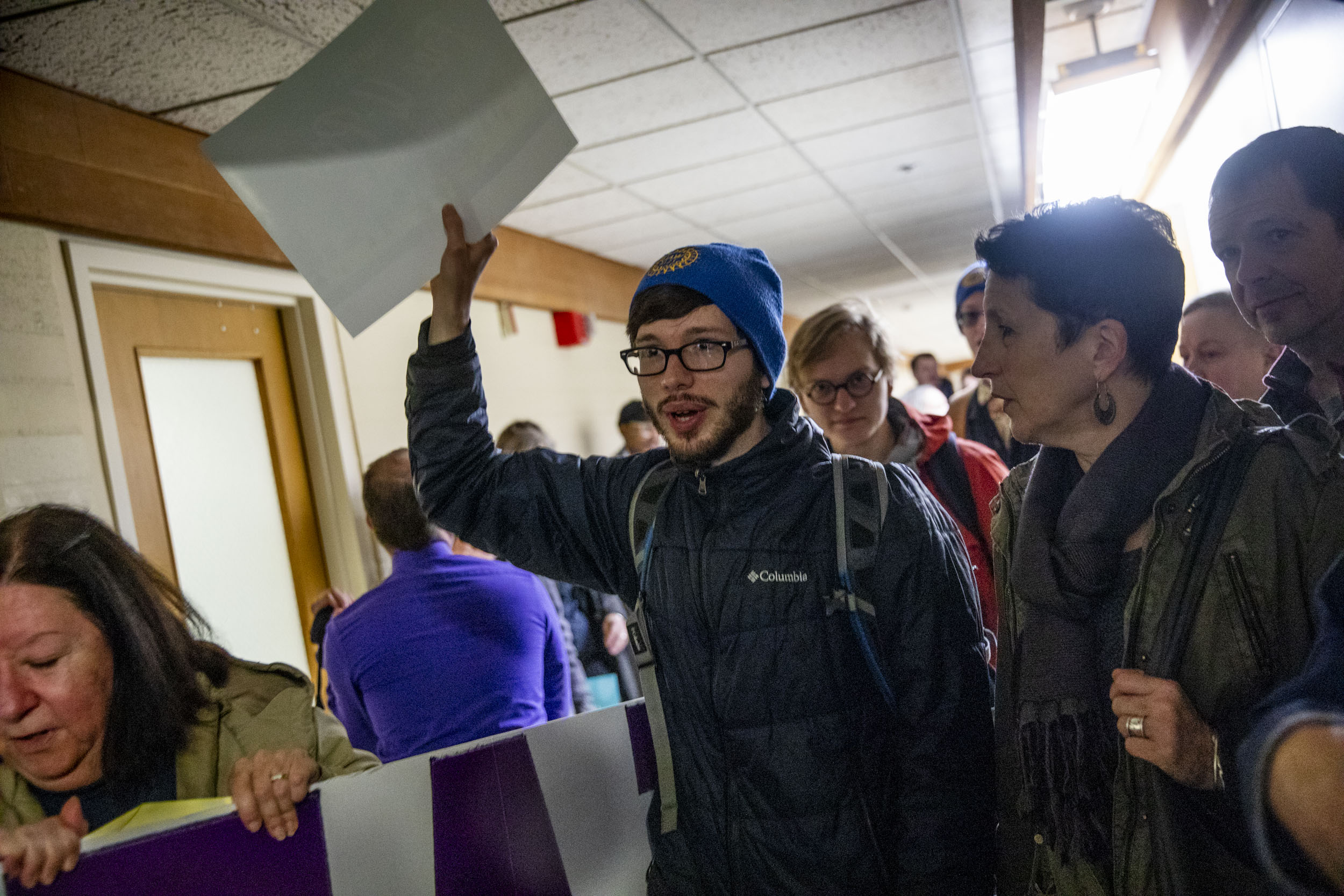 University of Washington faculty, staff and students march with activists through the halls of the UW Medical Center after delivering a letter demanding the university fully subsidize employee transit passes on April 22, 2019. (Photo by Dorothy Edwards/Crosscut)

About 20 University of Washington faculty, staff and students, joined by labor representatives and activists, marched down Pacific Street on Monday toward the UW Medical Center with demands that were crystal clear: What do they want? “Free U-Pass!” When do they want it? “Now!”

There were signs that the message resonated with the university colleagues who witnessed the protest. A campus shuttle bus driver flashed two thumbs up through her windshield, as the group marched by. When the group filed into the medical building, two women waved and smiled from a second-story window. When marchers passed through the lobby toward the medical center administrative offices, two people in the hall joined the chanting without hesitation.

For the past year, the nonprofit Transit Riders Union has led an effort to get the university to fully subsidize transit passes for every employee under the banner UW Pass or Fail. On Monday, about 35 representatives from the coalition gathered outside the Husky Stadium light rail station for a press conference, coinciding with Earth Day. The group argued that free transit passes would not only help move the needle on Seattle’s climate goals, but reduce the growing campus’ impact on the University District and put it in line with other large employers in the city who do more to offer transit incentives to employees.

“UW is the second largest employer in Seattle,” Katie Wilson, Transit Riders Union general secretary, said in an interview. “Providing free transit passes to employees is probably one of the most effective ways they can reduce solo driving.”

Currently, UW subsidizes 41 percent of each employee U-Pass, which can be used for regional buses, commuter trains, light rail and water taxis. To fund this benefit, the university pays about $4.6 million per year into the employee U-Pass program. Employees and staff who want the transit pass each contribute $50 per month, an amount that could go up before the next school year. Wilson argued that cost is too big a financial barrier for someone who still needs to drive a few times a week.

“If you have a situation where you can’t use transit all the time, it doesn’t make sense to shell out $50 a month,” Wilson told Crosscut. “But if the pass is free and you just have it in your wallet, maybe you take transit a few times a week. That really adds up in aggregate to reducing single occupancy vehicle trips.”

In Seattle, pollution from passenger vehicles accounts for a little more than half of the city's total greenhouse gas emissions. After trending down from 2008 to 2014, Seattle’s climate emissions actually increased 2.5 percent from 2014 to 2016, according to the most recent city report.

“One of the most important things any institution can do for climate is make it easier for people to spend less time in their cars,” Sierra Club Washington Chapter director Jesse Piedfort said at Monday’s event. “We’re in a time of climate crisis, and we know bold action is required of us and soon. … We need to be making transit more affordable and more accessible to more people,” Piedfort said.

Clearly, even if the UW offers its more than 25,000 employees more incentives to use transit, it won’t change Seattle’s climate equation by itself. Yet, Wilson argued, “If UW sets a good example, it’s easier to ask others to step up and do the same. If they set a bad example, it’s harder.”

Beyond the climate question, Wilson said there is also a Seattle City Council mandate that UW reduce its solo driving rate. As a condition of its approval of UW’s Campus Master Plan last December, the council required the university to set a goal of reducing the campus drive-alone rate from 17 percent to 12 percent over the next 10 years. The transit pass campaign says employee transit use is critical to achieving that goal. Currently only 6 percent of students drive to campus. More than 36 percent of employees do, however.

The university said it isn't relying solely on the U-Pass program to get the UW there.

“The UW’s 10-year goal of a 12% single-occupancy-vehicle rate relies on more than a fully subsidized U-Pass,” UW spokesperson Victor Balta wrote in an email. “The UW will need partner agencies, such as Sound Transit and [King County] Metro, to stay on schedule with system expansions. … We believe these expansions, other changes in commuter behavior and continued efforts to encourage carpooling and public transportation make the 2028 goal attainable.”

The Pass or Fail campaign’s organizing efforts have already paid off for about 15,000 of UW’s unionized employees, including those in SEIU Local 925, Washington Federation of State Employees Council 28, the Washington State Nurses Association, and United Auto Workers Local 4121, which represents graduate student employees. Those unions were able to build off the campaign and negotiate in contract bargaining for the UW to fully subsidize the U-Pass cost. Several other unions are in the midst of bargaining and are pushing for fully subsidized passes.

Balta said fully subsidized transit passes for unionized employees, “came after a comprehensive conversation about compensation and benefit priorities – and tradeoffs – for their members. The additional cost of completely subsidizing the U-Pass for all faculty and staff would come from student tuition and patient revenues, and requires similar dialogue about compensation priorities and tradeoffs with faculty and professional staff.”

Until that happens, about 10,000 UW employees will continue paying for their U-Pass. Those employees may actually end up paying more than $50 per month for their pass next year. The UW Board of Regents will vote in May on a proposal to increase employee contribution by 8 to 15 percent.

“To put it bluntly, many teachers at the university struggle to make ends meet in one of the most expensive cities in the country,” UW English Department lecturer James Daniel said at Monday’s event. “A fully subsidized U-Pass for university employees is necessary for making Seattle a livable city for faculty. …  A fee increase for commuting is neither acceptable nor tenable for most staff and faculty.”

Monday’s marchers went to the UW Medical Center to deliver a letter to Medical Center CEO Paul Ramsey outlining their case for a fully subsidized U-Pass. Ramsey was the intended recipient in part because some medical center employees are affected by the proposed U-Pass price increase and because the center is within marching distance of the UW light rail station. The letter was co-signed by 35 community groups, neighborhood councils, unions, transportation and housing advocacy groups and more. [Full disclosure: my wife’s employer, UNITE HERE Local 8, co-signed, but she has no involvement in the campaign.]

Ramsey’s office door was locked when the marchers arrived, and nobody emerged to accept the letter. After reading their letter in the hallway outside the office and taping it to the office door, the group finished with one last chant. This time they shouted, “We’ll be back! We’ll be back!”

As they filtered out of the medical center and regrouped to debrief, Wilson said, “They got our message, I think.”


Correction: An earlier version of this story stated that more than 31 percent of UW employees drive alone to work. It is more than 36 percent.