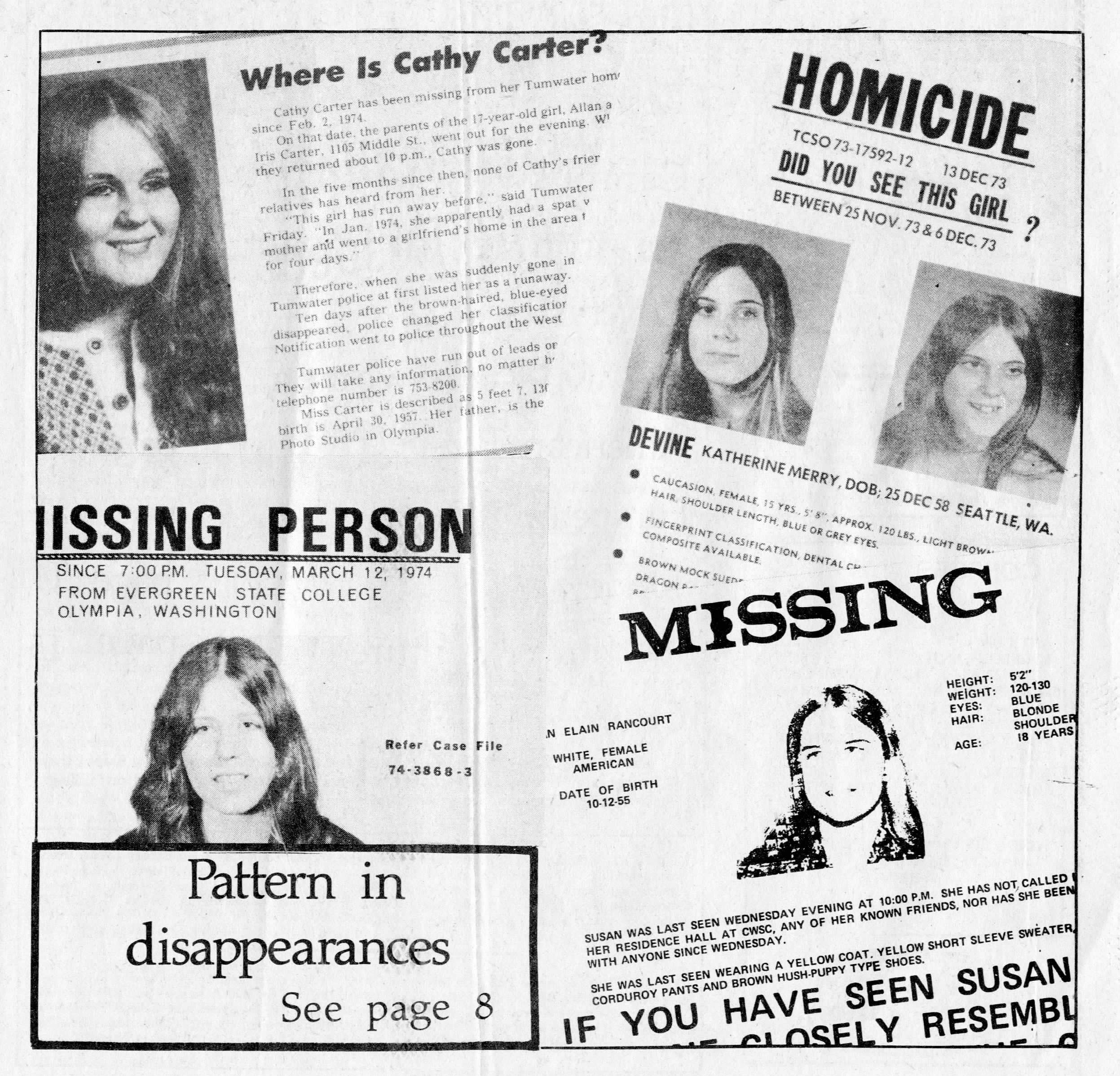 On March 12, 1974, a young student left her Evergreen State College apartment to walk across campus to attend a jazz concert. She wore pants, a colorful shirt, an agate ring and a fuzzy dark maxicoat. She was 5 feet tall, with long brown hair parted in the middle. She never came home. In fact, she has never been seen since. Years later, while on death row in Florida, serial killer Ted Bundy confessed to killing Donna Gail Manson.

I was editor of the Evergreen college newspaper, the Cooper Point Journal (CPJ), at that time. It took a while for Manson’s roommate to report her missing; Evergreeners were free spirits, and this was an era when students, male and female, might hitchhike somewhere or crash with friends without notice. As the weeks went by, however, it was clear something was wrong. In April, our paper ran a story about the missing student, along with a full-page ad offering a $500 reward for proof of her whereabouts. The Thurston County Sheriff’s Office began a wide-ranging search.

I went out with one of these search parties, which combed a large stand of second-growth alders near campus, the kind of damp, dark woods that are everywhere in this wet region. Our group found some bones, but they turned out to be those of a dead deer. No sign of Manson.

Other young women in the region, about the same age and of similar physical description, went missing, too, most of them students. By early July, the Thurston County Sheriff’s Office had hosted a “Homicide and Missing Persons” conference for law enforcement and media that focused on the disappearing women. The purpose was for various jurisdictions and investigators to “brainstorm” about the phenomenon. Police had no evidence yet that any crimes had been committed in these disappearances, only dark suspicions.

Wendy Kramer, a reporter we sent to the conference, wrote a front-page story, headlined “Pattern in Disappearances.” The late writer Ann Rule, not yet famous, was at the conference. She later wrote a true-crime book about Ted Bundy, The Stranger Beside Me; she had known him from working with him at Seattle’s Crisis Clinic. But at this early point, she didn’t know Bundy was involved.

Rule noted that the abductor seemed to be taking women at regular intervals, roughly one per month. They vanished from the University of Washington, Evergreen, Central Washington University in Ellensburg, Oregon State University and who knew where else. As the list of women mounted, Rule predicted at the conference that the next victim would vanish later that month, and that came to pass, only there were two victims. On July 14, two women disappeared in separate incidents from Lake Sammamish State Park in Issaquah, last seen in the company of a young man with his arm in a sling, calling himself “Ted” and driving a tan Volkswagen bug. A massive manhunt ensued, and people came forward with stories connected to other abductions or attempted ones. Bundy wasn’t caught, but he’d left behind vital clues, such as his name, his car and a ploy of pretending to need help.

Nobody knows when Bundy became a serial killer, but those 1974 disappearances put investigators on his trail and helped lead to his eventual capture. Bundy confessed to at least 28 murders, but also hinted the toll could be in the triple digits. After murders in Washington and Oregon, he moved on to Utah, Colorado and Florida, leaving a trail of death and mayhem. He was eventually sentenced to death in Florida and executed in the electric chair in 1989. Because he was raised primarily in Tacoma and appears to have started his known killings here, he is inextricably associated with the Northwest.

I was recently asked to reflect on Bundy for a documentary that is being made about him and which is tentatively scheduled to be completed this fall. When the late Anthony Bourdain came to Seattle in 2017, he also asked me about serial killers. What was it about the Northwest and serial killers? Bourdain asked. I joked that it is an easy place to hide the bodies.

There is some truth to that. In 1974, Washington had relatively recently connected to other regions by means of larger, faster interstate highways. These roads allowed people to travel rather anonymously to and past areas that offered the kind of wooded privacy Bundy liked when killing and later visiting his victims’ corpses. Bundy would return again and again to these semiremote locations. Those two women at Lake Sammamish, for example, were taken one after the other to a hidden spot up the road from Issaquah — just a few minutes from the park and near Interstate 90. I’ve been there. The sound of the freeway can be heard from those woods.

Bundy put serial killers into the public consciousness, but he also changed how we think of mass murderers, who, until then, had been thought of as crazed, like Charles Manson or Son of Sam. Bundy was intelligent, a law student, a good-looking guy who seemed like the boy next door. He worked for then-Gov. Dan Evans and for the Republican Party. He was the kind of young man your parents might have liked because — unlike many young men of that era— he wasn’t a long-haired hippie protesting in the streets. His victims were, as one investigator described it, “everyone’s daughters.”

What are we to make of Bundy now? Some feminist critics have postulated that Bundy is an exemplar of “gynecide,” representing a breed of sexually motivated male serial killers who are romanticized in TV movies and in titillating stories in the media. Ann Rule said Bundy attained the status of a Billy the Kid figure.

This bears rethinking in this #MeToo era, when misogyny and patriarchy are being exposed and challenged. Is Bundy an extreme example of our worst cultural impulses? Or is he a rare monster whose execution was rightly celebrated? The terrible nightmare of Ted Bundy and his victims, and his place in our culture, is worth re-examination nearly half a century on.

This column, in a slightly different version, originally appeared in the April edition of Seattle Magazine.