The federal judge said the city and the police department have fulfilled nearly every requirement of an agreement with the Department of Justice to overhaul the department — but concerns remain. 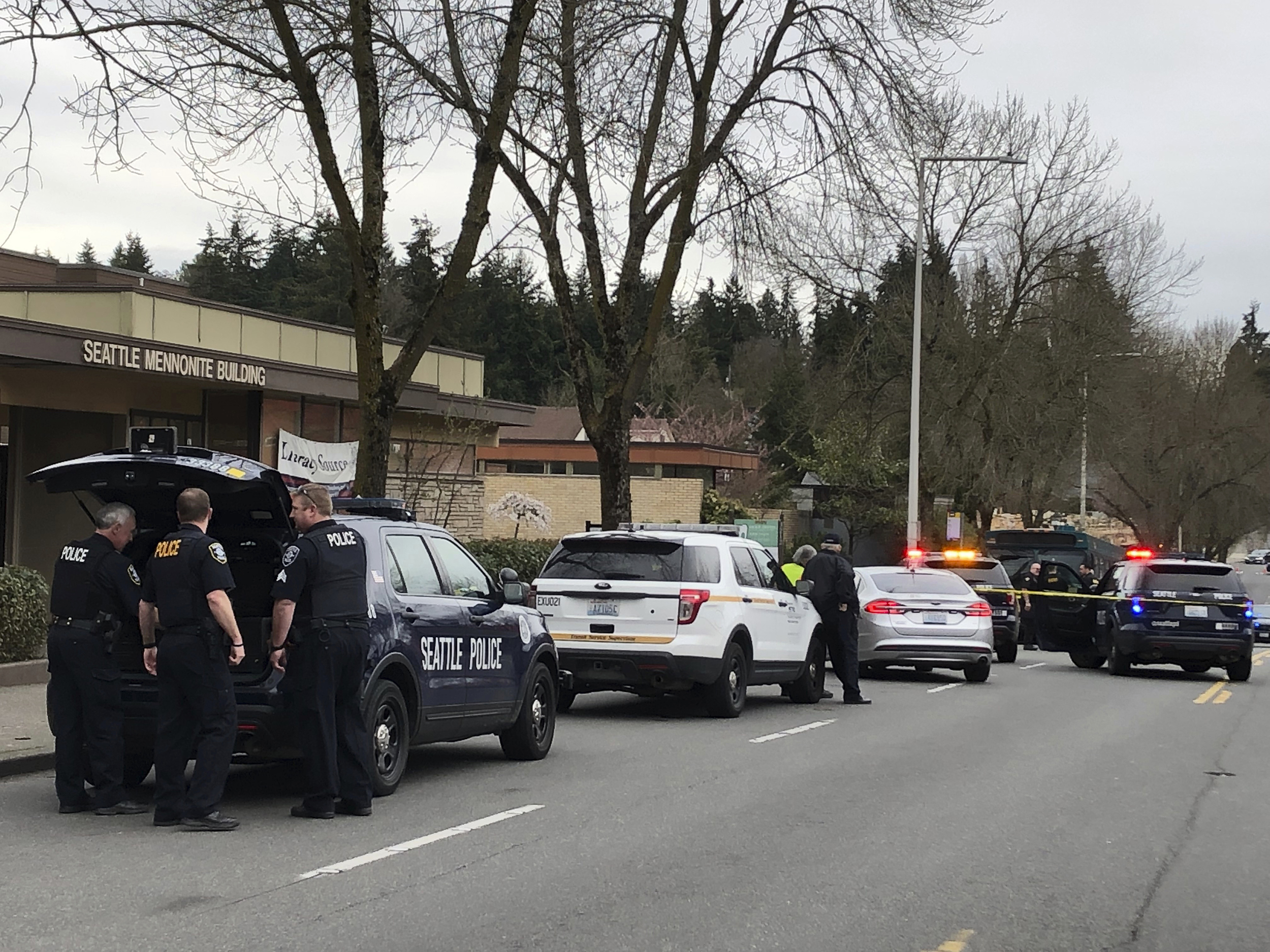 Seattle police work at the scene of a shooting in Seattle on March 27, 2019. (Photo by Gene Johnson/AP Photo)

The city of Seattle has “fallen partially out of compliance” with an agreement to overhaul the Seattle Police Department, a federal judge said Wednesday.

The pronouncement from U.S. District Judge James Robart was rooted in his concerns about the recent contested reinstatement of officer Adley Shepherd, who was fired in 2014 for punching a woman.

While Robart said the city and the police force have fulfilled nearly every requirement of an agreement with the Department of Justice to overhaul the department — including improved use-of-force practices, heightened community confidence, a more robust internal affairs and seven other benchmarks — he remained concerned about the ability of the chief of police to hold officers accountable.

“Ladies and gentlemen, we are better but we are not perfect,” Robart said.

At issue is a conflict that has been brewing for years between legislation passed by the Seattle City Council in 2017 and a new contract with the officers union, the Seattle Police Officers Guild, in fall 2018.

The legislation gave more power to civilians to investigate misconduct and limited officers’ options to seek out a favorable ruling for reinstatement. In addition to adding more civilian oversight, it also gave more agency to the chief of police to be the final word on firings.

When the proposed new contract with the officers union was made public, members of the Community Police Commission, a civilian advisory group, recommended that the Seattle City Council reject it, arguing it rolled back accountability measures set out in the 2017 legislation.

Mayor Jenny Durkan denied it was a rollback, instead casting the contract as a step forward and a necessary pay bump for officers. The council approved the contract.

Shepherd’s reinstatement came shortly after final approval of the contract. Chief Carmen Best is resisting his reinstatement and the city is arguing the case in court.

Judge Robart’s ruling tracks closely with the Community Police Commission’s recommendation to find the city out of compliance on the department’s accountability structures. Most salient was his concern that a labor arbitrator “should have the ability to overturn the decision of a respected, trained, experienced chief of police,” as occurred in the Shepherd case.

Depending on the specifics of his written ruling, Robart’s message could represent a blow to the city’s effort to escape from federal oversight. Robart ruled in January 2018 that the city was in preliminary compliance with the 2012 agreement. That kicked off a two-year winding-down period, to expire this coming January.

But he threatened rescinding the finding of compliance following the contract's approval and the ruling to reinstate Shepherd.

Robart said Wednesday that the city could still meet its 2020 deadline, but would have to satisfy his concerns about officer accountability. That could mean one of several things. In a press conference Wednesday, Mayor Durkan held out the possibility that the city could make a compelling enough case in the next seven months that the contract as written is working to uphold accountability.

“I think when the judge reviews all the facts, he will determine we’re in compliance,” said Durkan, who as U.S. attorney brought the original case against Seattle.

Alternatively, Robart could demand the city change specific portions of the contract to ensure no repeats of the circumstances that followed the accusations against officer Shepherd. If the latter, that could mean the daunting prospect of a return to the bargaining table for Seattle’s officials. It could also set up an unprecedented conflict between state bargaining rights and a federal judge.

Durkan declined to say what the city’s next move would be until she read Robart’s written order, which is expected within the next week.

“Almost everyone who walked out of the courtroom had a different view on what he was actually asking us to do.”

Anne Levinson, a retired judge who has advised the Community Police Commission through the whole reform process, was unambiguous in her reading of the hearing. “It was really a strongly worded statement by the judge that the accountability system needs the same level of attention and reform as the other aspects of policing,” she said after the hearing, “and that he wanted the city and the Department of Justice to go back and strengthen those collective bargaining agreements and make a case back to him that they had now reformed those in the same quality that they reformed the rest of the system.”

Seattle City Councilmember Lorena González said in a statement, “I acknowledge that a signal by the Court that we may be partially out of compliance with the consent decree is not an ideal outcome. This is a message that we should all take to heart while we eagerly await Judge Robart’s written court order.  When it comes to constitutional policing, any ground lost is simply too much.”

A spokesperson from the Seattle Police Officers Guild declined to comment until Judge Robart issued his written ruling.

The process to overhaul the department’s standards for using force, training and officer accountability kicked off in 2012, following a damning investigation by the Justice Department. The report concluded that officers used excessive force and exhibited patterns of bias.

By most standards of the consent decree, the department has made steady progress in recent years. Since 2015, SPD has passed all 10 tests set by the monitor, including force investigation, community confidence, crisis intervention and internal oversight.

Officers in the department are using force only very rarely and the highest levels of force even less often than that. People in crisis are also scarcely being subjected to force.

Questions of equity remain. When officers do use force, it is disproportionately against people of color when compared with the city’s total population. Black, Asian and Hispanic people are searched more often, even as white residents are found more often to be carrying a weapon.

In his hearing, Robart said the city and the department should be proud of the progress. But he also elected to air the video of Shepherd punching the woman in the car.

“Basically where we are today is that much has been accomplished and less remains to be done,” he said. “But what remains is both required and very important.”