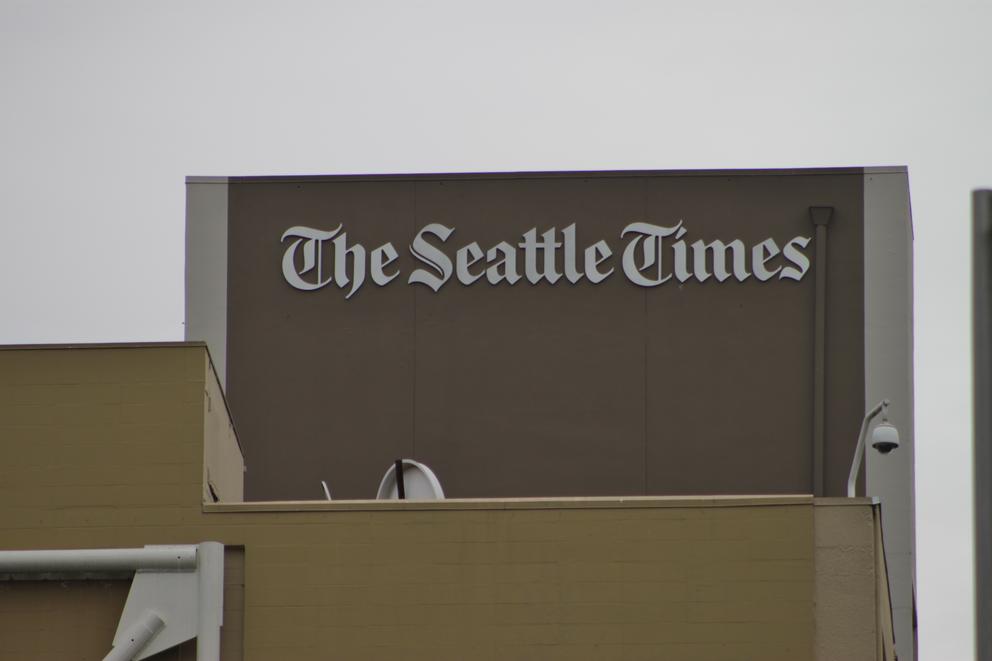 The sign at the Seattle Times offices in the South Lake Union area of Seattle. (Photo by SounderBruce/Flickr)

A Brooklyn-based writer has accused a Seattle Times reporter of sending her sexually harassing messages on Twitter.

Talia Jane, a journalist known for authoring an open letter to the CEO of Yelp critical of the Bay Area company’s wages and benefits, posted screen grabs of a private conversation between her and reporter Mike Rosenberg on Twitter.

The conversation, which took place in the early hours of Sunday morning, seemed to escalate quickly. Rosenberg suggested she should apply for reporting jobs before writing “anyway, you’re so beautiful” and then, abruptly, more than half an hour later, at 3:55 a.m., sent a sexually explicit message.

Reached by phone, Rosenberg confirmed that he did send the messages to Jane before reiterating a claim he had made to her after she called out his last message as inappropriate: “They weren’t supposed to go to her,” he said. When asked who the messages were intended for, Rosenberg said, “I would rather not say.” He then said he was at the hospital and promptly hung up the phone.

A message from The Seattle Times' Twitter account, posted Sunday afternoon, stated: “The Seattle Times was made aware of allegations of sexual harassment against a news employee. We have suspended the employee pending an investigation by our human resources group. As this is a personnel matter, we will have no further comment on this at this time.”

In an email response to an inquiry from Crosscut, Seattle Times President and Chief Financial Officer Alan Fisco added: “We take these kinds of allegations very seriously.”

Reached by phone, Don Shelton, executive editor of The Seattle Times, said he could not comment any further. Shelton would not say whether Rosenberg’s suspension was paid or unpaid.

When Jane shared the messages with her more than 20,000 Twitter followers, she identified Rosenberg as the sender of the messages, and wrote that “being a woman is totally normal and very cool,” then, “do men realize they don’t *have* to hit send,” and “feeling supes chill that an established, married journalist is so comfortable using my lack of a job to get me to chat.”

As of Crosscut publication time, Jane’s initial post had been shared 1,800 times and liked more than 9,000 times.

The accusation comes at a time of heightened awareness of online sexual and workplace harassment, thanks in part to the Me Too movement, which has galvanized women from a variety of communities and backgrounds to speak up about sexual assault.

“I was having a really lovely night and now my whole body is so tense that I’m shivering,” Jane wrote on a more serious note, adding: “I’ve done nothing to encourage this or signal in any capacity that this behavior would be welcome. All I did wrong was exist!”

According to the messages, Rosenberg attempted to negotiate the situation with Jane, confessing that he was “fucking miserable” and that “really, anything, I can do I would.” She then asked him to delete his Twitter account so that he would no longer have the option of “engaging in predatory behavior from behind the safety of a screen.” Rosenberg, however, said he feared losing his job and wife.

According to the messages, Rosenberg then claimed that he was having trouble deleting his Twitter account. She suggested he publicly admit what he did, via social media, but instead of tweeting about his behavior, Rosenberg eventually did delete his account.

Jane also claimed in a later tweet that Rosenberg had at one point promised a $1,000 donation to NOW, the National Organization for Women. “Wrong move,” she said. “Women are not toys. We certainly should not be played with and efforts to manipulate us will not be tolerated. Live with your choices.”

Rosenberg is a well-known journalist in the region who, before deleting his profile, had tens of thousands of Twitter followers. He covered growth in the city, reporting on the sharp rise in the cost of living in Seattle, focusing specifically on housing. Before being hired at The Seattle Times, Rosenberg was a reporter in the Bay Area, working at the San Jose Mercury News. He was also a board member of the Society of Professional Journalists for Western Washington.

In a statement, the Society of Professional Journalists for Western Washington said that it is “aware of sexual harassment allegations involving one of our board."

“We take this claim very seriously and have suspended the board member pending further information,” the organization added. “Sexual harassment is a pervasive issue in journalism and other industries, and we support survivors.”

The social media response to the allegations against Rosenberg was swift. Lindsey Wasson, a freelance photographer who was once employed at The Seattle Times, demanded a response from the newspaper on Twitter and called for Rosenberg’s firing.

On Sunday afternoon, after The Seattle Times had tweeted about the suspension, Jane tweeted a screenshot of Shelton’s response to her. Jane had emailed Seattle Times’ editors about what had transpired. In his email to her, Shelton said: “We do not tolerate this kind of behavior.”

Addressing outlets that had reached out to her directly, including Crosscut, Jane tweeted she didn’t “have any comment to add. I think what I said already pretty clearly sums it up.”

Correction: An earlier version of this story stated that Rosenberg allegedly encouraged Jane to apply for Seattle Times jobs. The screen grabs currently shared by Jane show only that he encouraged her to seek out reporting jobs, in general. The story has been corrected.

From a trans retelling of the Icarus myth to a darkly funny tale about bulimia, the opera’s new mentorship program lets a new vanguard take the stage.