State officials see the money from VW's federal settlement as offering "a critical opportunity" to put 50 more zero-emission vehicles, including school buses, on the streets. 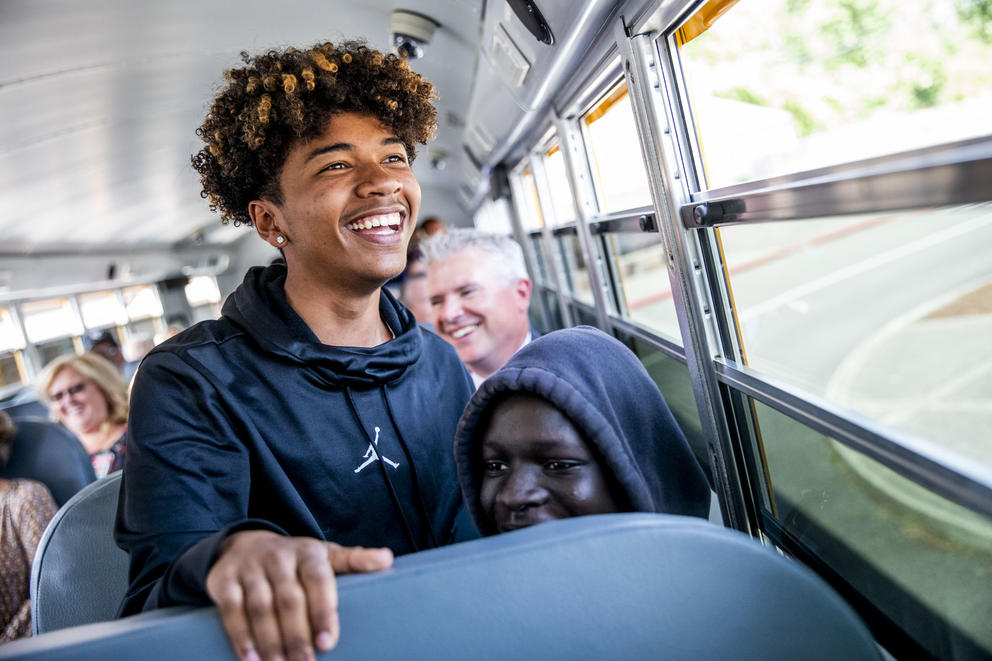 Freshmen Malik Goodrum, left, and Modi Wani ride the first electric school bus in Washington state during an event with Gov. Jay Inslee at Franklin Pierce High School in Tacoma on June 17, 2019. "I feel pretty privileged to be on this bus with Gov. Inslee right now," Goodrum says. (All photos by Dorothy Edwards/Crosscut)

Since the U.S. federal government issued a notice of violation to Volkswagen in September 2015, the German automaker has been forced to pay out more than $30.4 billion to settle claims that it intentionally deceived regulators gauging emissions in its diesel vehicles. Of that, VW set aside nearly $3 billion for states to reduce diesel dependency and related pollution.

Nearly one year later, the state of Washington has announced its first allocation of that funding, through the Washington Department of Ecology, distributing $13.3 million among six transit agencies purchasing 50 zero-emission electric buses. The department has also begun steps toward putting some of the settlement money into electric school buses.

Washington state received $112.7 million from the federal settlement, the sixth-largest portion of all states.

In December, the Department of Ecology granted $9.4 million of the $28.4 million it received in a separate state settlement with VW to transit agencies purchasing an additional 19 electric buses.

“Volkswagen settlement funds represent a critical opportunity for states to accelerate the transition to zero-emission vehicles. Washington is taking a big step in the right direction here, and we hope other states — some of which are still spending on dirty diesel buses — will take heed,” says the National Resources Defense Council’s Luke Tonachel, who directs its Clean Vehicles and Fuels Group. Washington is devoting 45% of its settlement share to electrifying buses and trucks.

According to Mike Boyer, Ecology’s manager of diesel programs, there are about 3,450 transit buses in Washington state, many of which still run on diesel fuel.

“Big diesel engines are some of the largest sources of air pollution and greenhouse gases in our state, and investing in zero-emission alternatives is essential for improving air quality and protecting Washington communities,” Maia Bellon, the director of Ecology, says in a press release.

Ecology gave funds to transit agencies that submitted applications, with emphasis on areas most impacted by diesel pollution. All but one transit system that applied — Wenatchee’s Link Transit — received funds, with King County Metro receiving about half of the total funding, for 23 electric buses  — more than twice as many nontrolley buses as it has now. The county has the largest number of people significantly impacted by diesel pollution, Boyer says.

“We have a map of all the areas exposed to diesel pollution in the state, and certainly you look at Seattle and some of the other really dense parts of King County and those are at the top of the list,” says Andrew Wineke, a public information officer at Ecology.

Each transit agency is a long way from actually shuttling battery-powered buses down their respective urban corridors, however. Ecology is giving each agency up to two years to find additional funding required to pay for the new buses. Metro’s Jeff Switzer says the agency expects to put its buses in service starting in 2021.

“An electric bus is a great substitute for a diesel bus, but they're not exactly the same,” Wineke says. “Everybody wants to get the buses on the road, but there will be some flexibility. ... These are big investments and nobody wants to mess it up.”

Electric buses consistently cost more than diesel buses, though costs are falling with increased interest and technology. Ecology’s funding, which provides up to $300,000 per bus, is meant to help cover the difference of replacing aged diesel vehicles with electric ones, rather than continuing the cycle with diesel.

Ecology claims making that trade would result in the emission of 68,000 fewer tons of carbon dioxide, tied to global warming, and 70 fewer tons of nitrogen oxide, which has both health and environmental effects. According to the Puget Sound Clean Air Agency, outdoor air pollution causes an estimated 1,100 deaths within the state each year.

“A lot of transit agencies already have plans or commitments toward zero emissions … and they might have one or two buses — a bunch of transit districts have that,” says Wineke. “We're helping them get past the pilot stage … so we can start to look at, how do you go about electrifying an entire fleet?”

King County leads the field with Metro’s fleet of 11 battery-powered buses. These 40-foot Proterra-brand buses (a popular choice, Wineke says) operate on routes 226 and 241, which serve the Eastside. Metro’s Jeff Switzer says these buses currently cost $975,000 each. New buses “would operate out of the South Base area and serve routes originating from that location,” he says, although the specific routes are yet to be determined.

It’s unclear whether Ecology will support more transit electric buses through future application rounds via the settlement fund, Wineke says. The department is planning to allocate money toward airport utility vehicles, trains, charging stations and ferries, which have the largest diesel engines of any vehicle in the state. “We're trying to learn as we go. That's why we're not just trying to put all $112 million on the table at once,” Wineke says.

While the department this week is also unveiling the state’s first electric school bus (not funded through the VW settlement), Wineke says Ecology would like to use some of the settlement funds for more school buses.

“We're absolutely looking at that,” he says. “We put out a request for interest to school districts, and got lots of interest across the state.” He added that there could be a whole round of grants for electric school buses.

Ecology wasn’t able to cover all of the money that agencies sought. “There's definitely more appetite out there than we have funding [for], but this was a serious, literal down payment on switching our transit systems to zero emissions,” Wineke says.

Meanwhile, agencies like Metro are pursuing more vehicles through additional grant funding. Using other money, including grants from Ecology and the Federal Transit Administration, King County is “intending to order 120 buses in 2020 to be received starting 2021," Switzer says.

This article was updated on June 18 to clarify the timeline of the emissions scandal.

Fewer riders and lower fare collection are just part of the financial challenge for transportation during the pandemic. 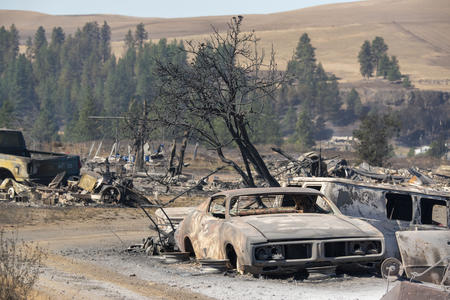