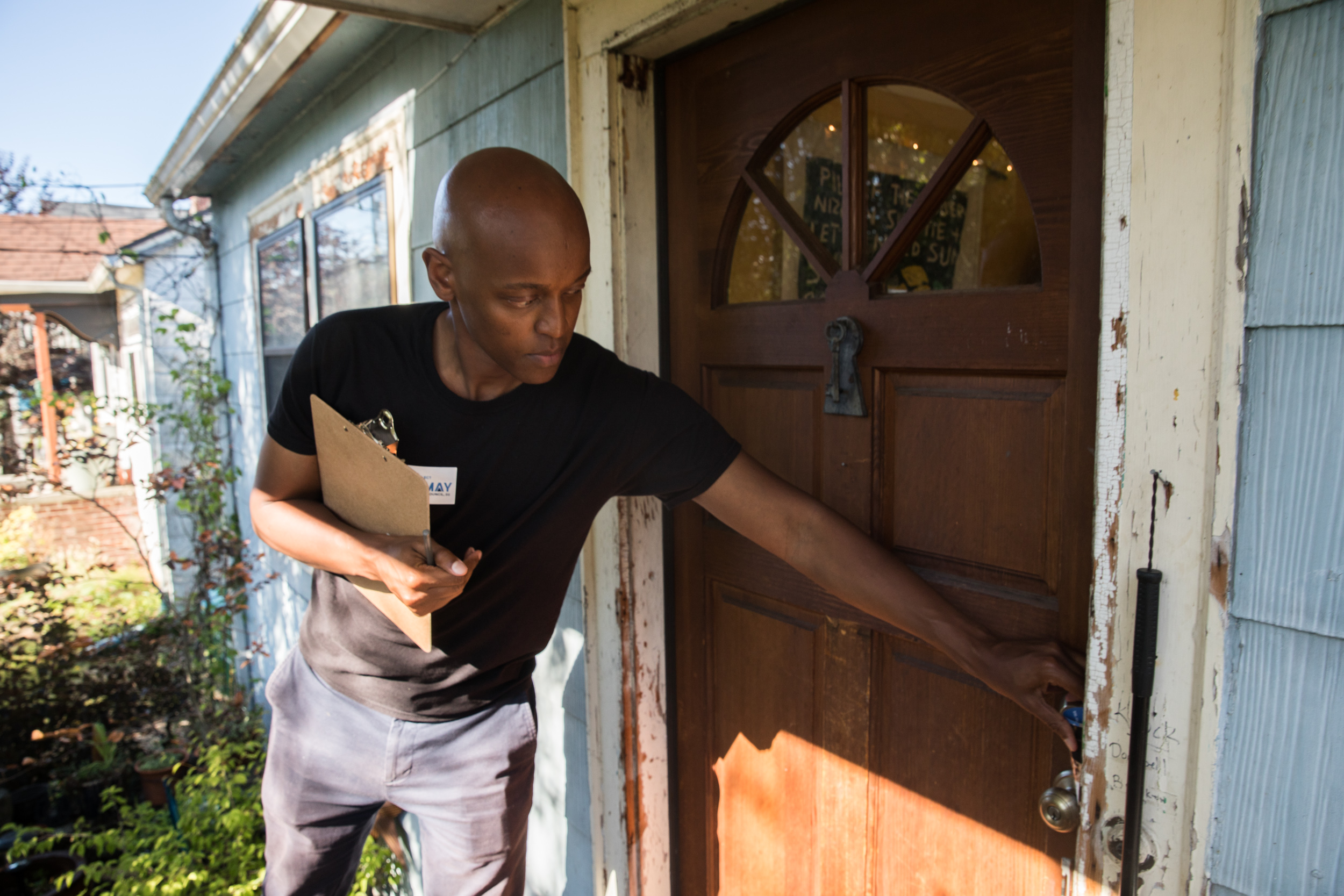 Phyllis Yasutake emerged from her yard last week to tell Girmay Zahilay that he had already won her vote. It was five days before Tuesday’s primary election, and Zahilay was out knocking on doors in South Seattle, a part of the city he hopes to represent on the King County Council.

As the two chatted about housing and ways to keep kids out of the criminal justice system, Zahilay didn’t bring up his opponent in the District 2 race, civil rights leader and longtime King County Councilmember Larry Gossett. But Yasutake, who knows Gossett personally, steered the conversation there. She wanted to explain why she wasn’t voting for the 25-year incumbent this time around.

“I’m not mad at Larry. I’ve known Larry all my life,” said Yasutake, 70. “But we are at an age where we are getting up there. We need to start bringing in that next generation.

“It’s time to pass the torch.”

Judging by the early results from Tuesday’s primary election, a large portion of voters in the district feel the same way. Zahilay, a 32-year-old lawyer and first-time candidate for public office, delivered a blockbuster performance in the primary, accumulating 52% of votes in the first batch of returns.

Gossett, 74, garnered about 39% of the vote Tuesday night. By Wednesday, Zahilay's lead had grown: he was claiming 54%, compared with Gossett's 38%.

Both men will go on to compete in the Nov. 5 general election.

To many observers, it was an unusual turn of events.

“The fact that he managed to convince people he is a viable alternative to such a longtime incumbent, who isn’t facing any particular scandal — that’s pretty impressive,” Anderstone said of Zahilay.

Gossett’s campaign did not respond to multiple requests for an interview Wednesday.

Zahilay, who graduated from Seattle’s Franklin High School and later co-founded a nonprofit to mentor young people from disadvantaged backgrounds, said he didn’t enter the race planning to stage an upset. When he announced his campaign in February, he said, he did so with the assumption that Gossett was planning to retire.

When Gossett later announced he would seek reelection, Zahilay decided to stay in the race and see it through, he said.

On the campaign trail, Zahilay emphasized he isn’t trying to run a campaign that beats up on Gossett, a longtime community figure whom he said he respects.

“I really am running because I care about the community I was raised in,” Zahilay said last week. District 2 includes the Central District, Capitol Hill, Beacon Hill, Rainier Valley, Seward Park, Skyway, the University of Washington, Ravenna and Laurelhurst.

Whether intentional or not, Gossett and Zahilay are now locked in a heated race heading into November. But in many policy areas, the two men share similar priorities, judging from their public statements.

Gossett, like Zahilay, is focused on increasing affordable housing stock throughout King County, he wrote in a candidate questionnaire he submitted to the 46th Legislative District Democrats. And Gossett, like Zahilay, says he wants corporations to pay more of their fair share in taxes. A recent county council decision that Zahilay has sharply criticized — a vote to spend about $130 million of tax dollars on stadium improvements — was something Gossett voted against.

Both men speak passionately about reforming the criminal justice system and addressing the disproportionate incarceration rates of people of color. 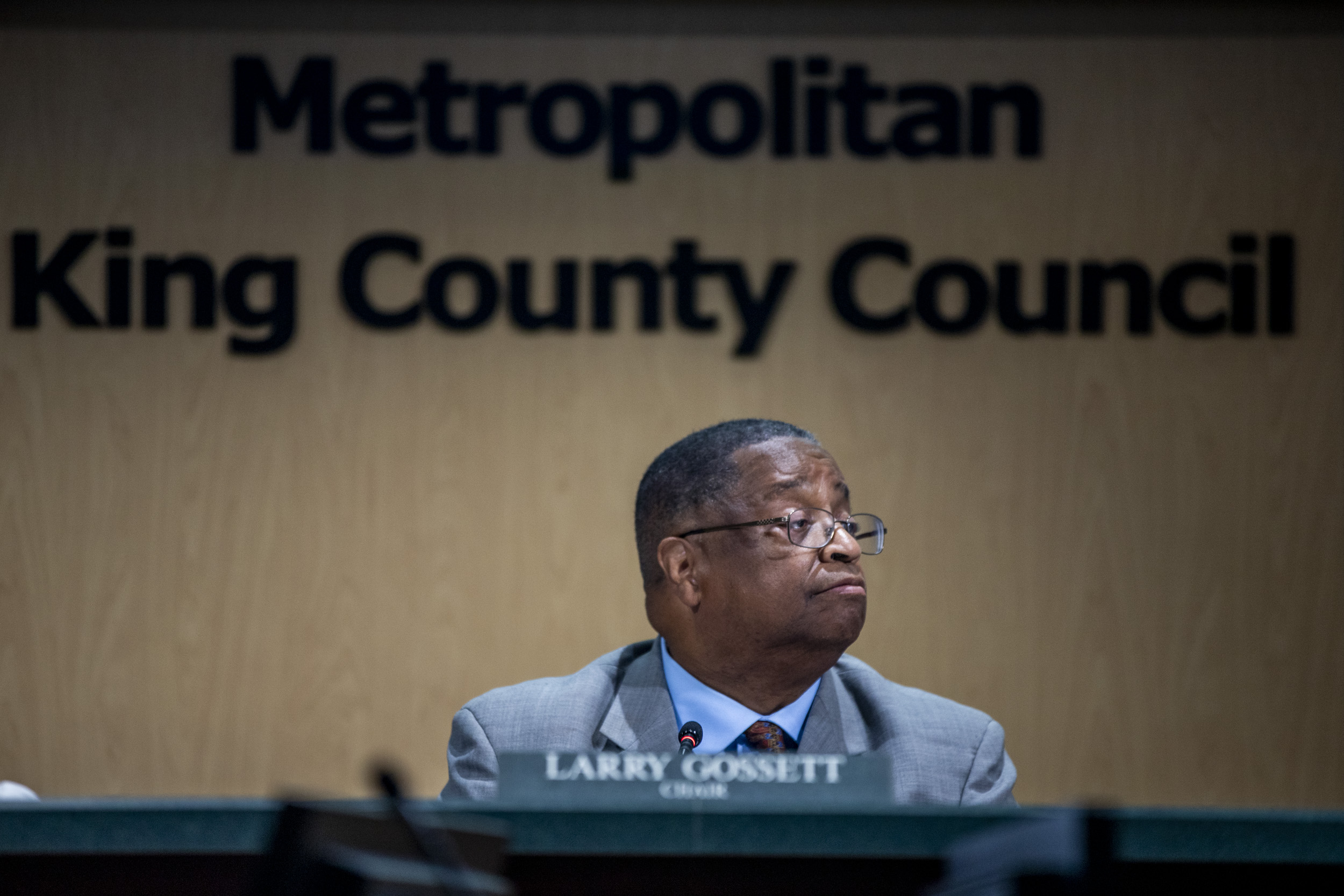 They diverge, however, when it comes to supporting King County’s new youth jail. Zahilay has been outspoken against the project, while Gossett has indicated he supports the new detention facility, which will be part of a larger youth and family justice center.

Gossett has deep history in Seattle politics and the Black community. In the late 1960s, he was one of the founders of the Black Student Union at the University of Washington. In 1968, he was part of a group that organized a sit-in at Franklin High School to protest the suspension of Black students, a demonstration that ultimately led to him be arrested and charged with unlawful assembly. Gossett was also part of a group of UW students that marched to demand the university create a Black studies program and recruit more Black administrators and faculty.

Yet a vast number of newcomers to the Central District and South Seattle don’t have the same connection to Gossett or his past leadership, said Crystal Fincher, a political consultant who works primarily with Democrats. She said the demographic shift has helped create an opportunity for an organized and motivated newcomer like Zahilay.

“When you look at all the people who have moved here from outside the state and all the people from one area or another that wound up in Larry’s district, there are a lot of people who don’t have that history with Larry,” Fincher said Wednesday.

Meanwhile, Zahilay’s background as an immigrant also appears to be helping him engage some communities that aren’t always as active in politics, said Chase Cross, the first vice chair of the 37th Legislative District Democrats.

Zahilay was born in Sudan and is the son of Ethiopian refugees. He immigrated to the United States when he was 3, growing up in the Rainier Vista, Henderson and Holly Park neighborhoods.  He lived in Skyway while attending high school at Franklin.

That led to Zahilay winning the 37th District Democrats’ endorsement in a landslide, by a vote of 108 to 45, Cross said.

“I really like Larry as a council member,” Cross said Wednesday, “But in this case, Girmay just outhustled him.”

After attending college at Stanford and earning his law degree from the University of Pennsylvania, Zahilay co-founded a nonprofit in New York City called Rising Leaders, which provides mentorship and leadership opportunities to underserved middle school students. Zahilay moved back to Seattle in 2017 and started a Seattle chapter of the organization. He recently left his job as a lawyer at Perkins Coie to focus on the nonprofit, according to his campaign.

Zahilay said he is focused on helping to combat the housing affordability crisis that is displacing people who have lived in South Seattle neighborhoods for generations. One of his top priorities is providing more public transportation options throughout the district, which he said is becoming more essential in light of the area’s gentrification. More transit is also part of Zahilay’s plan to reduce automobile emissions and help curb climate change, which he emphasized disproportionately affects low-income communities and communities of color.

Fincher, who has worked on many Democratic campaigns in South King County, said one reason community members might feel comfortable supporting Zahilay is because of some of the ways he and Gossett are similar. Certain voters might see Zahilay as a person who can “carry on Larry’s legacy” — something she said might not be the case during a future election cycle with a different challenger.

“Among a lot of longtime Gossett supporters, they feel very protective of that seat, as he's the only African American on the council and someone who has stood up for social issues for so long,” Fincher said. “He’s made that part of the legacy of the seat.”

“I think if there was someone running completely opposite of Larry, we would not have seen this result.”

In any case, if Zahilay was once the underdog in the race, he’s not anymore, said Heather Weiner, another Democratic political consultant. “Now, Larry’s the underdog,” Weiner said.

For his part, Zahilay said he isn’t taking his early lead for granted. More primary ballots will be counted in the coming days, and the general election remains months away.

“To address the new challenges in our region, we need new voices, new energy,” he said Tuesday evening.

At the same time, he added: “We know the work is not over.”