A new speaker of the House in Olympia could mean action next year, but an assault weapons ban is probably still off the table. 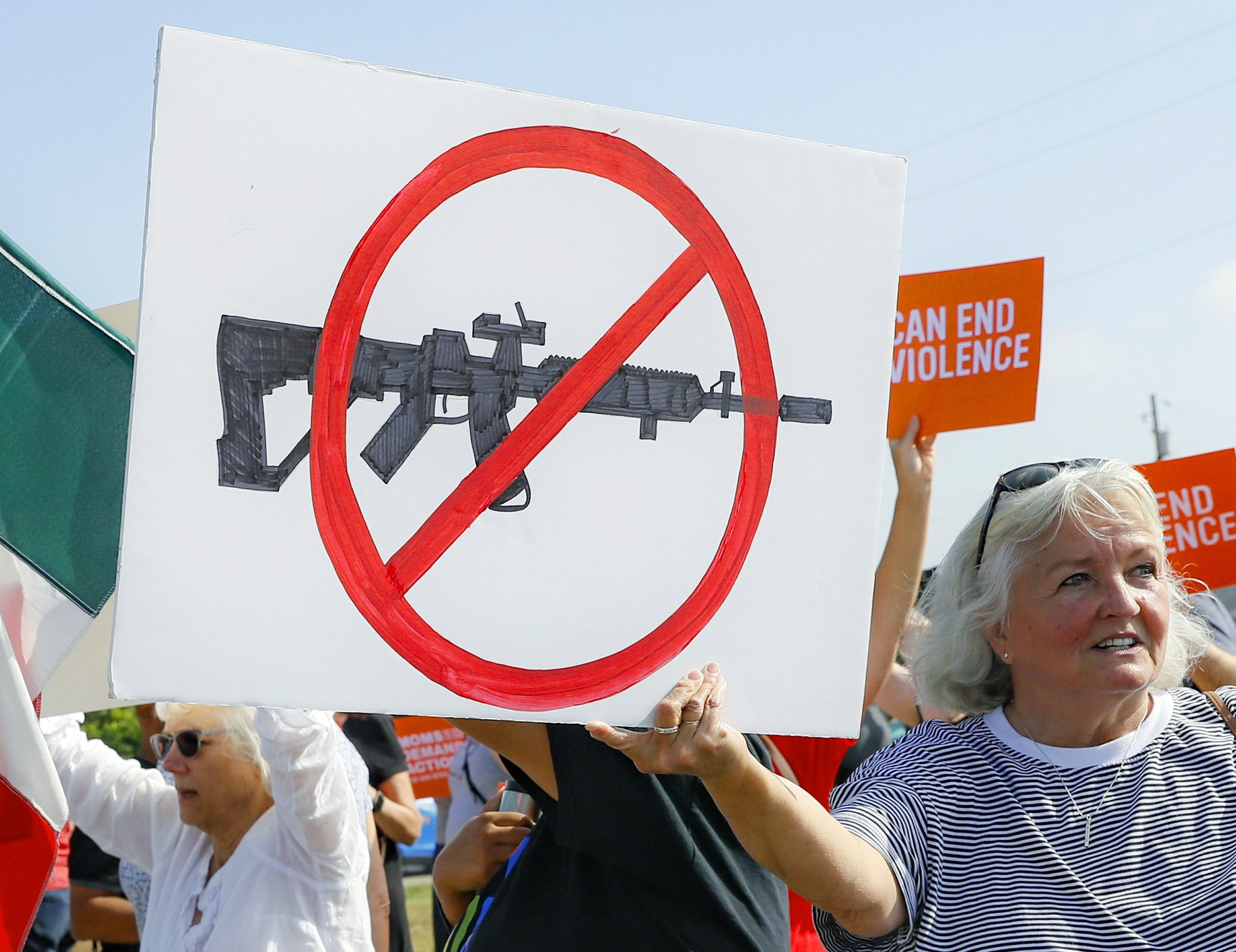 Demonstrators gather on Aug. 7, 2019, to protest after the mass shooting in Dayton, Ohio. The shooter, armed with a rifle outfitted with a 100-bullet drum, killed nine and injured dozens in 30 seconds. (Photo by John Minchillo/AP)

“I have had multiple members contact me and say, ‘We need to be doing something, this is shameful,’ ” said Pedersen, who chairs the state Senate committee that considers gun legislation.

But some of the most aggressive measures now being floated by gun-safety advocates — as well as Gov. Jay Inslee, who is in the midst of campaigning for president — have previously failed to advance in Washington’s Legislature. While Inslee released a plan last week calling for a nationwide ban on assault weapons, as well as a ban on high-capacity magazines that can hold dozens of rounds, legislators in his home state have repeatedly declined to pass those measures into law.

That political picture could soon change, however. A shift in leadership in Washington’s Legislature, combined with outrage over the latest mass shootings, are leading to renewed discussions about more ambitious gun-control measures at the state level, Pedersen said.

That’s particularly true when it comes to banning high-capacity magazines, like the 100-round drum used by the shooter in Dayton, Pedersen said.

“We certainly will try to get it done,” Pedersen said of banning high-capacity magazines in Washington. He said he thinks passage of the measure is possible next year.

State Rep. Laurie Jinkins, a Tacoma Democrat who was recently chosen to become the next speaker of the state House, agreed that a ban on high-capacity magazines “would have a pretty positive impact.” She said she supports the policy and plans to have “open and earlier dialogue” about it with other House Democrats.

“We want to talk about it,” Jinkins said Thursday, adding, “I know personally where I am at.”

Earlier this year, Jinkins co-sponsored legislation to ban magazines that hold more than 10 rounds of ammunition. The bill passed out of the House Civil Rights and Judiciary Committee, which Jinkins chairs. But the bill never was brought to the House floor for a vote.

He said he and his GOP colleagues will adamantly oppose any bills that criminalize ownership of high-capacity magazines. But, given how deep Republicans are in the minority, Irwin said their opposition might not matter.

Following last fall’s election, Democrats now control the state House 57 to 41, and have a Senate majority of 28 to 21. (A 29th Senate Democrat, Tim Sheldon, caucuses with Republicans.)

“If they want it, they can get it,” Irwin said of the Democrats.

In the past, though, not all Democratic lawmakers have been on board, he noted — neither for an assault weapons ban, nor for a high-capacity magazine ban.

That has frustrated Democratic Attorney General Bob Ferguson, who has unsuccessfully pushed for both measures each of the past three legislative sessions.

“In general, when it comes to common sense gun safety measures, the people are way ahead of the politicians,” Ferguson said Friday. He recalled how state lawmakers refused to pass his proposal that would raise the minimum age to buy semi-automatic rifles, as well as requiring stricter background checks for people purchasing those weapons. Ultimately, voters approved those changes last fall by passing Initiative 1639.

Despite that history, Ferguson said he is hopeful that a high-capacity magazine ban can get through the Legislature next year, after lawmakers reconvene in January. “I think there’s a path,” he said.

He’s less optimistic about lawmakers approving his proposed ban on assault weapons. Part of the reason, he said, is that politicians are “deathly afraid of the gun lobby” — a fear he thinks is misplaced.

Jinkins said there are additional issues that make passing an assault weapons ban more complicated than passing a high-capacity magazine ban. To start, defining what would constitute a prohibited assault weapon can prove tricky, Jinkins said.

Broad definitions can end up including certain guns that most people “wouldn’t necessarily consider an assault weapon,” she said.

Write the definition too narrow, however, and it is easy to manufacture military-style weapons that narrowly avoid falling under the regulation, Jinkins said.

And there is potentially another barrier to passing an assault weapons ban. Jinkins and Pedersen both said that by passing I-1639 in 2018, voters made it more difficult for lawmakers to enact other legal changes surrounding assault weapons — at least, for the time being.

The state constitution requires a two-thirds vote for the Legislature to amend a voter-approved initiative within two years of its passage. Jinkins and Pedersen think enacting an assault weapons ban could qualify as changing the initiative.

“We have never had a simple majority to ban assault weapons, so there is no conceivable world in 2020 where we could move an assault weapons ban,” Pedersen said. “It just doesn’t make sense to call for that.”

Ferguson’s office is still conducting a legal analysis to determine whether the two-thirds vote requirement would actually apply to his assault weapons proposal. Even if it did, that barrier would exist only in 2020. By 2021, lawmakers could again amend the statute with a vote of a simple majority of the Legislature.

Even then, however, passing an assault weapons ban is not a sure thing, said Cornell Clayton, director of the Thomas S. Foley Institute for Public Policy and Public Service at Washington State University.

Clayton said he expects to see an assault weapons ban take hold in Washington only if it is approved through a citizen initiative, much as I-1639 was.

He noted that even though I-1639 passed with more than 59% of the vote, some police chiefs and sheriffs throughout the state are saying they won’t enforce the law. “That tells you how volatile the issue is on the east side of the state and in rural areas,” Clayton said.

Still, the Legislature did take action on several gun-related measures this past year. Those included bills making it harder for people suspected of domestic violence offenses to keep their guns and enacting limits on undetectable “ghost” guns made from three-dimensional printers.

Jamal Raad, a spokesman for Inslee’s presidential campaign, said the state's progress on those gun safety issues shouldn’t be discounted. He said Inslee's leadership has played a role.

“He’s gotten every big-ticket item done that has been a top priority for the advocacy community,” Raad said.