The suit, led by California, seeks to prevent the administration from rolling back protections for children provided in the Flores settlement. 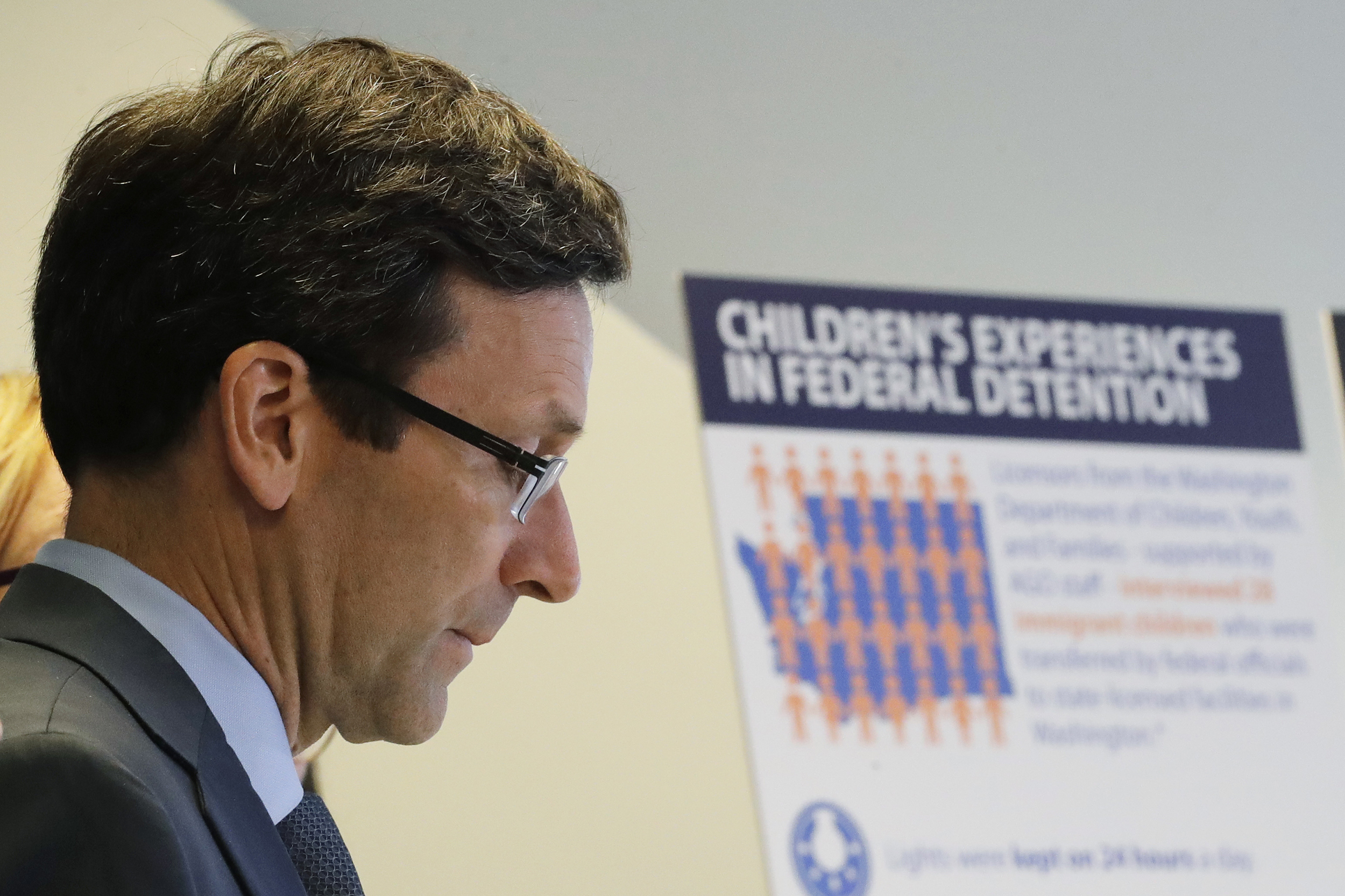 Washington Attorney General Bob Ferguson listens to a question as he stands next to a display board on Aug. 26, 2019, during a news conference in Seattle. Nineteen states, including Washington, are suing over the Trump administration's effort to alter a federal agreement that limits how long immigrant children can be kept in detention. (Photo by Ted S. Warren/AP)

There were freezing temperatures, the lights were on 24 hours a day and there was no space to sleep. The detained children who somehow managed to fall asleep were awakened at regular intervals for roll call, at midnight, 3 a.m., 6 a.m. and 9 a.m.

When awake, the children were told by guards, “Don’t touch me, I don’t want to get your diseases.” The guards threw food on the ground, prompting fights among hungry children.

Children were never given toothbrushes or toothpaste and had limited showers and soap. Girls on their period were provided only one sanitary pad a day. One girl who had bled through her clothing said she “had no choice but to continue to wear her soiled underwear and pants.”

These are the stories told by immigrant children recently detained at the border, unaccompanied, and transferred to various facilities in Washington state, where 100 beds are reserved for migrant children in facilities contracted by the Office of Refugee Resettlement. The allegations all pertained to incidents at border facilities.

Now the accounts will serve as supporting evidence in a new lawsuit being filed by Washington and 18 other states, in addition to the District of Columbia. They are suing the Trump administration over its attempt to effectively undo the two-decade-old Flores Settlement Agreement. The suit targets U.S. Immigration and Customs Enforcement, the U.S. Border Patrol and the Department of Homeland Security, among others.

“Our goal is to put a stop to these changes,” Attorney General Bob Ferguson said Monday while showing emotion at the press conference announcing the lawsuit.

“This administration’s blatant disregard for the basic human rights of immigrant children is truly breathtaking,” Ferguson continued, his voice cracking.

“I have no doubt in my mind, at all, that someday my kids, all our kids, will look back and say, ‘What on God’s green Earth were all of you thinking? What were we possibly thinking as a nation?’ ”

The Trump administration has argued the changes are needed to stop the ongoing influx of adults who have chosen to enter the United States illegally with minors. Ferguson and other attorneys general, meanwhile, argue the proposed rule would violate the due process clause of the U.S. Constitution.

In response to questions, Tanya Roman, a spokesperson for ICE in the Pacific Northwest, said: “ICE does not comment on pending litigation. However, the agency’s lack of comment should not be construed as agreement with or stipulation to any of the allegations.”

The Flores settlement stems from a class-action lawsuit filed in 1985 by four immigrant children in U.S. District Court for the Central District of California — the same court in which the current lawsuit was filed. The suit challenged “the policy and the detention conditions to which they were subjected.”

The settlement, arrived at in 1997, requires that detained children be held in facilities that are safe and sanitary. It also holds that children must be released within 20 days. Initially covering only unaccompanied migrant children, the settlement was later expanded to include children who arrived with parents.

The states' lawsuit argues that the proposed change “systematically undermines, alters, and even eliminates key elements” of the Flores settlement, “stripping children of protections that are critical to their health, well-being, and constitutional rights.”

One of the Trump administration’s key proposals is the creation of family detention centers. Because state licensing requirements do not allow for family detention, ICE has for the most part been blocked from subjecting children to prolonged detention with their parents.

In 2001, ICE began detaining a limited number of families in detention facilities (what ICE called “Family Residential Centers”) in Pennsylvania, Texas and New Mexico, but such facilities came under scrutiny and prompted legal challenges.

Now, the proposed rule “purports to create a system for federal ‘licensing’ of family detention centers, contravening state policy that disallows facilities for the residential care of children to operate without state licenses,” the lawsuit states.

According to the lawsuit, the American Academy of Pediatrics, the National Disability Rights Network and a group of 78 members of Congress have stated the “importance of state licensing standards in providing basic protections and accountability for the health and safety of children’s residential facilities.”

The proposed changes also seem to allow for the detention of children who would be held separately from their parents in a secure adult facility.

Under the proposed rules, any child arriving with a parent or legal guardian cannot be released to any other adult. The rules also would eliminate the option for unaccompanied children to be released to an adult other than a sibling, uncle, aunt or grandparent. Children who are asylum seekers and present themselves at a port of entry would not be eligible for bond.

The lawsuit, the 47th against the Trump administration that has been led or joined by Ferguson’s office, details the impact the proposed changes would have specifically on Washington state.

In fiscal year 2019, which ended in July, the Office of Refugee Resettlement released more than 500 children to Washington state sponsors or facilities. Family detention “will adversely affect Washington’s financial interests, as it must expend additional resources to address the harms inflicted on increasing numbers of immigrant parents and children. State programs, including those for housing assistance, foster care, child welfare services, social and health services, and educational services are all likely to experience significant fiscal impacts.”

At the press conference, Ferguson focused on what he said was the lack of humanity governing immigrant children’s care.

In support of the lawsuit, his office plans to submit a 26-page declaration detailing the mistreatment of children at the border, as told to Alma Poletti, an investigation supervisor. Kids put in metal cages if they were perceived to be misbehaving or restless; guards taunting children, telling them “welcome to the U.S., you’re all going to be sent back to Mexicali, but at least you got to see what the U.S. looks like”; frozen or cold burritos and bread that tasted like dirt at meals.

“The values we hold as a people are being violated every single day,” Ferguson said.